Erin Payne is an accomplished American painter and the wife of Jake Johnson, a well-known Hollywood actor. In 2012, Erin received the New American Painting Reader’s Choice Award. Jake’s wife’s work has been featured in a number of shows, including the OBJCT Gallery and the Los Angeles Contemporary.

Even in this trendy world of social media where everything about one’s life is put out for public consumption, either for clout-chasing or business, celebrity American painter, Erin Payne has done a deliberate job to keep her private life out of the reach of the public. 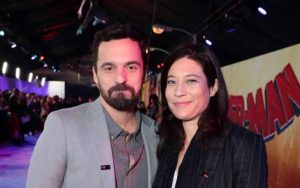 The mother of two has maintained a low profile on social media, with very little information about her marriage to Hollywood actor, Jake Johnson in circulation.

A number of people only got to know her after getting hooked up with the celebrity actor. We’re sure you are itching to know more than is on the internet about the life of this award-winning painter.

Erin Payne was born on the 8th of September in San Diego, United States of America which makes her a Virgo- it’s probably why she’s excellent at what she does. She does seem a perfectionist

The 5’9 painter (some inches shorter than her husband, Jake Johnson) was born in 1971 and will be fifty in the last quarter of the year.
We are still, at this point, unable to unravel the mystery about her parents and time spent with them but we learned that she carries mixed ethnicity.

We do not have the most accurate details about her elementary and high school. However, we can confirm that Erin graduated from The School of the Art Institute of Chicago in 2002 in BFA (Bachelor of Fine Arts) in painting and drawing.
In 2011, she obtained her Master’s degree- Master of Fine Arts (MFA) in Fine/studio arts from the Claremont Graduate University in California.
She’s certainly a qualified painter.

Even though the fascinating painter came into limelight after her relationship with Jake Johnson, Erin is an experienced artist and has been in the business since 2002. She is based in Los Angeles, United States.A lot of her paintings her on renowned art websites like Shutterstock.com and Pinterest.

Erin Payne has her personal website where her paintings can be viewed and bought- www.erinpayneart.com (source: LinkedIn). 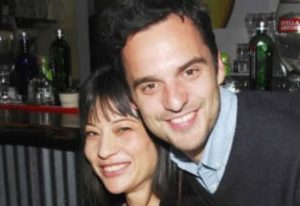 She has attended numerous art exhibitions and showcased her paintings on some of the most prestigious platforms, like the Ground Space Project, OBJCT Gallery, Los Angeles Contemporary and Ray.

Essentially, the 49 year old exhibits a variety of rhythmic paintings which cut across different transfixing styles; from installation to naturalistic landscapes, piles paintings as well as sculpture.

In 2012, Erin Payne became the winner of the New American Paintings Reader’s Choice awards which ensured her painting was hung at the fair.
She has also had collaborations with famous artists like Cole James, John O’Brien and Roland Reiss.

Erin Payne done particularly well for herself, independently of her husband.

While we do not have an exact figure of what she’s worth, we do know, according to Pay scale, that an expert painter earns close to fifty thousand dollars annually. For a celebrity painter of Erin’s stature, that gives us a fair idea of what she accumulates each year.

We also know that her husband, Jake Johnson has a net worth of $20 million from being a star actor in movies like Paper Heart Drinking Buddies etc.

Erin Payne and her husband are co-founders of a non-profit organisation, ‘Johnson Ohana Charitable Foundation’ which supports art, environment and music.

Erin and Jake have reportedly been together since 2005. However, some reports (unconfirmed at this point) have it that they had a secret wedding ceremony in July 2011.

They are both parents of twin daughters. Jake confirmed in 2017 in an interview with Hollywood Access, that his daughters were born in 2013 and were three years old. The couple alongside their children live in Los Angeles, United States.

The couple is the parents of two children. In 2014, Jake Johnson and his wife welcomed twins Johnson and Rachel into their family.

Jake Johnson and Erin Payne have been married for over a decade and live in Los Angeles, California with their family. The pair has managed to keep their personal lives out of the spotlight. Jake claimed in an interview that his marriage is full of love and trust, and that kissing Megan Fox in season 7 of New Girl was no problem for him. Here’s what he had to say:

“My wife is the least jealous person in the world. I know actors say this, and if you’re not an actor you kind of roll your eyes, but set kissing, it’s not []. I’d get on Twitter and people would be like, “You lucky b*stard.” And I’m like, if you were there, you’d know it’s just technical. I’m there kissing her, and then we cut and I’m like, “Did I block her light?”‘