He swapped the footy field for a career on breakfast television, and just scored himself a Logie Award for Best New Talent.

But while he’s enjoying his newfound success, Tony Armstrong has revealed there is one aspect of fame he still finds ‘uncomfortable’.

The ABC personality told the I’ve Got News For You podcast that he doesn’t like the commentary about his physical appearance. 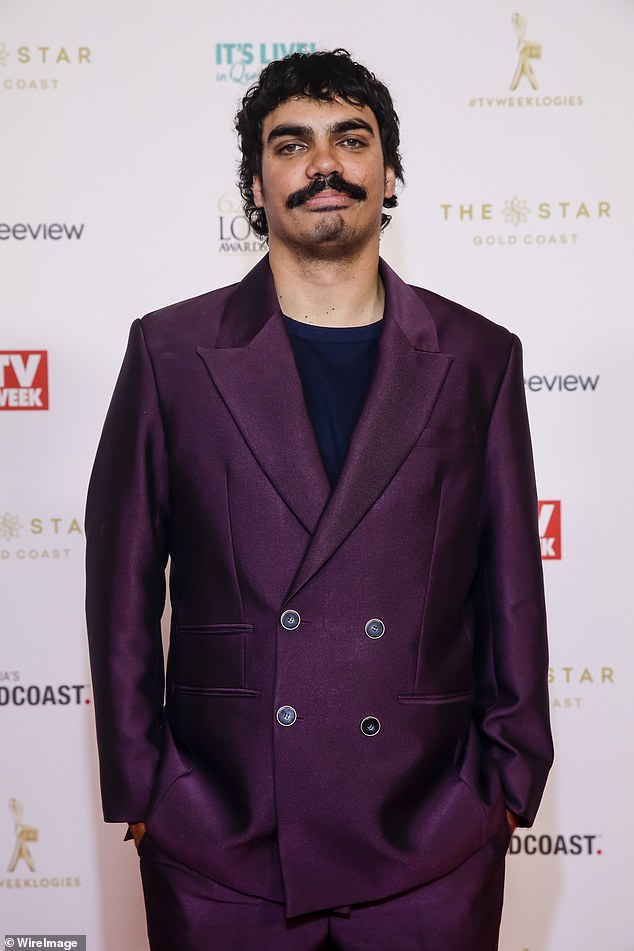 Tony Armstrong, 32, has revealed he’s not entirely comfortable with his ever growing fame, as he doesn’t enjoy his appearance being discussed

Tony, who is often praised for his good looks, was asked by host Rowdie Walden what he thinks of people saying he’s a heart-throb.

‘It doesn’t necessarily make me comfortable, I would say,’ he replied.

‘I’m not really super comfortable doing all the press stuff anyway, but when I’m talked about and I’m not really a part of it, I just find it all a bit odd.’

The ABC News Breakfast sports presenter went on to say he’s glad he didn’t become famous until his thirties, because he probably wouldn’t have handled it well when he was younger. It comes as the Breakfast sports presenter was missing in action for several hours after winning a Silver Logie at Sunday night’s TV Week Logie Awards. ABC host Tony Armstrong and Hamish Blake showed off their gongs as they posed for a selfie together at the airport on Monday

The former AFL player spent all night partying and failed to show up for work on Monday after scooping the Graham Kennedy Award for Most Popular New Talent.

ABC Queensland reporter Michael Rennie was tasked with tracking down Tony on the Gold Coast and eventually found him just before 7am on Monday.

‘I’m looking for him, trying to find him. Haven’t been able to find him yet,’ he said while standing in front of the former AFL player’s hotel.

‘We’re looking around the hotel where he’s staying. No sign of him yet. Been on the phone a few times. No answer! But I’m sure we’re getting closer to tracking Tony down. I think we might find him by the end of this hour, hopefully,’ he added.

After a long search, Michael was eventually able to find Tony outside the hotel chatting to Gardening Australia presenter Costa Georgiadis. 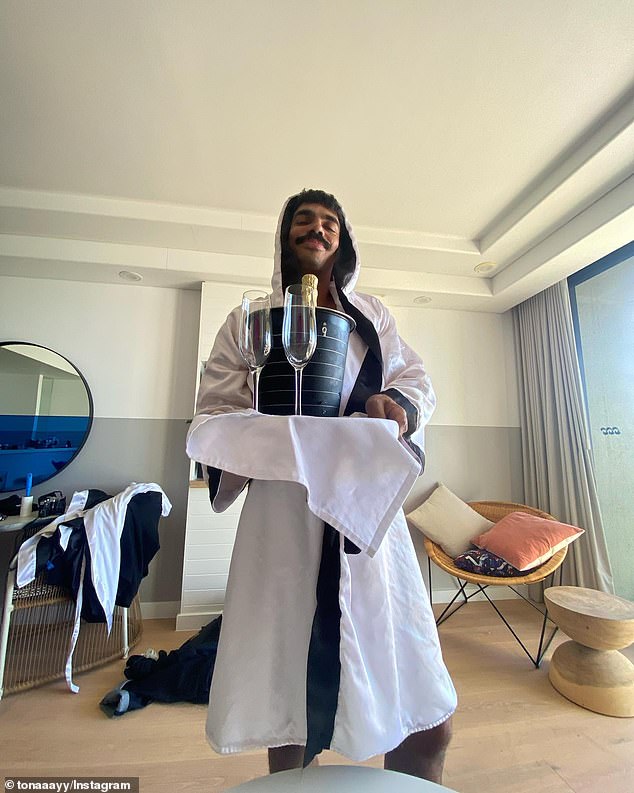 Another photo in the collection sees Tony, 32, dressed up in a white robe carrying two Champagne glasses and an ice bucket

‘I found him – he’s over here!’ Michael declared as he raced towards a dusty-looking Tony and gave him a handshake.

Tony appeared rather exhausted after a long night of partying, sporting scruffy hair, red eyes and a hoarse voice.

He wore a green hoodie and clutched his Logie statuette.

‘Hey, guys, I can’t hear you back in the studio but thank you so much for all the support that you gave me along the way,’ Tony said.

He went on to admit he was hungover and had struggled to get up that morning.

‘A lot of people were after a rapid rise this morning but I couldn’t quite get up in the seven o’clock hour. But [I] managed to rapidly rise at eight and here we are,’ he said. 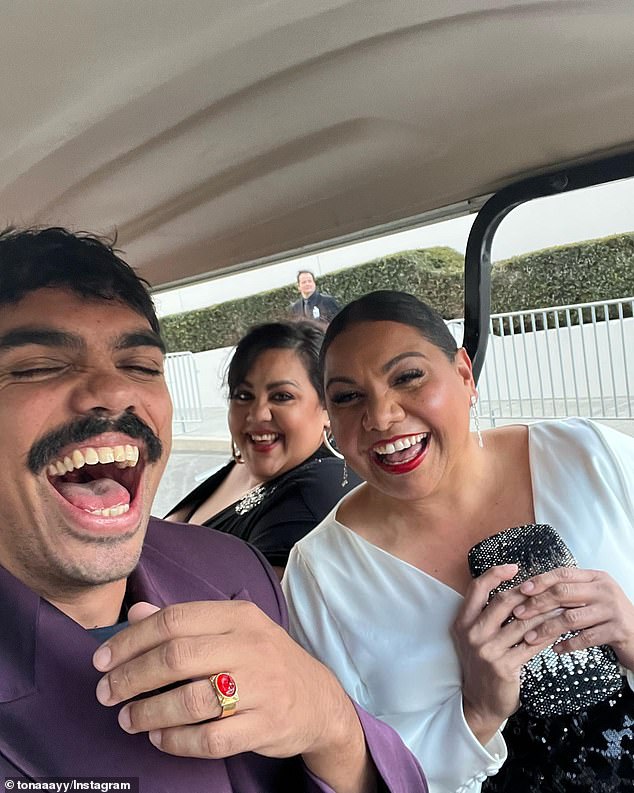 It comes after Tony hit back at Twitter trolls who had criticised him for delivering a Welcome to Country at the Logies.

Tony acknowledged the traditional owners of the land while presenting an award with 2022 Australian of the Year Dylan Alcott.

His speech drew backlash from some social media users who accused the Barranbinya man of ‘going woke’ and ‘virtue signalling’.

‘Acknowledgement of country is virtue signalling that does nothing to further the wellbeing of Indigenous people in Australia,’ one person wrote on Twitter. 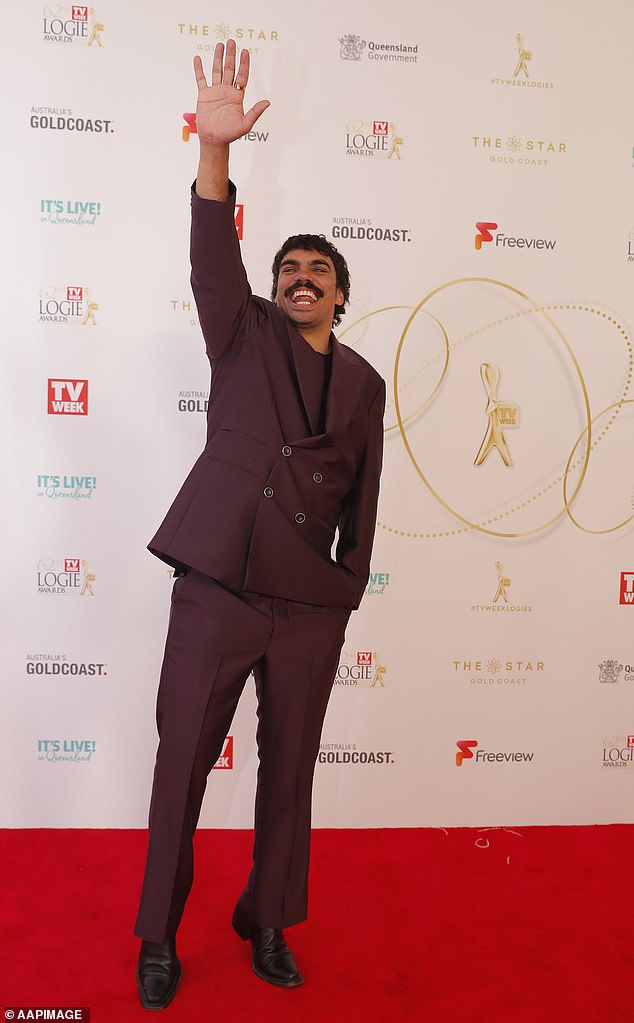 ‘Specially to a room of coke-sniffing elites. It’s time we drop this nonsense.’

Tony returned fire and shut down the haters with a blunt and apt response.

‘Shut up bro,’ he wrote. ‘I’m a blackfulla and I am duty bound to respect the land I’m on.’

His comment sparked an outpouring of support from fans who swooped in to defend him and commend the former AFL player for delivering the Welcome to Country.

‘Don’t let him shake you you are at the start of the top of your game keep growing past this point lot better things to do with your awesome energy up and beyond,’ one wrote.

Tony went on to win the Graham Kennedy Award for Most Popular New Talent.

He delivered an emotional acceptance speech thanking his mother for her unflagging support throughout his career.

‘The old cheese, my mum, she is a superstar, has done everything for me and has been a superstar and I would not be up here without her so a big thanks to her and please give her a clap, she will love it back home,’ he said. 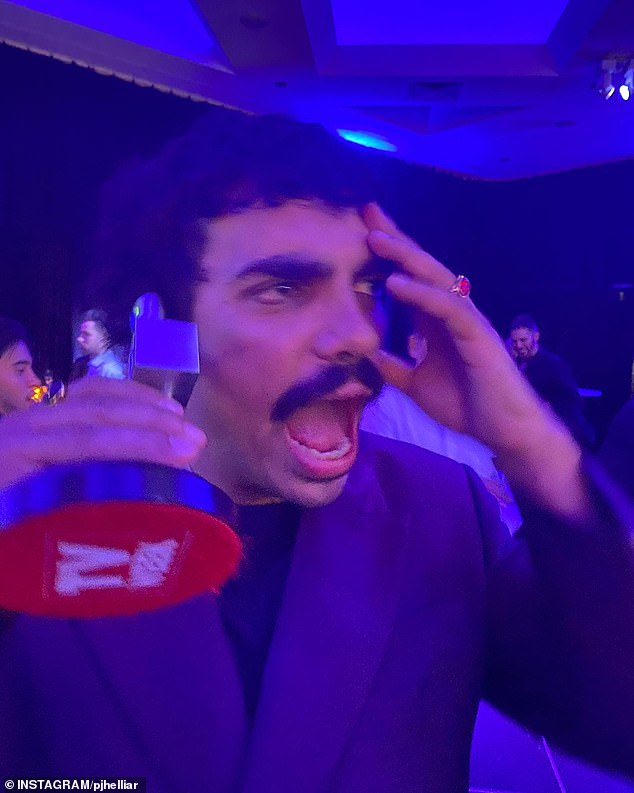