Ainsley Harriott came to the rescue of his sister when she fell into a water feature during day one of the Chelsea Flower Show in London on Monday.

The TV chef, 65, saved his sibling Jacqueline from drowning according to onlookers after she tripped and fell into the water.

Ainsley, who later confirmed his sister was ‘doing fine,’ was seen checking on her with other passers-by as she lay on the ground next to the garden pond feature in the grounds of Chelsea Hospital. 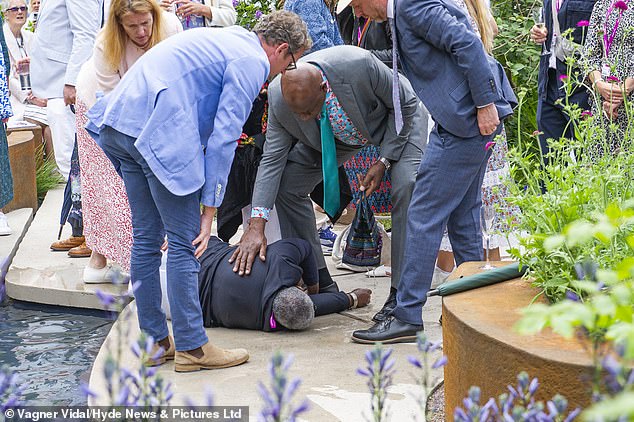 Hero: Ainsley Harriott came to the rescue of his sister when she fell into a water feature during day one of the Chelsea Flower Show in London on Monday

A group, which also included DIY SOS presenter Nick Knowles, had been admiring the BBC’s show garden on Monday morning when the accident took place.

Ainsley’s sister, a retired teacher and the chef’s guest at the VIP launch, ingested a large amount of water and had to be pulled out of the narrow water feature at the Our Green Planet and RHS Bee Garden exhibit.

Paramedics arrived shortly after Jacqueline was pulled from the water, with Ainsley later tweeting that she was ‘doing fine’.

‘Just a big thank you to everyone who helped my sister when she had a fall at the Chelsea Flower Show this morning. She’s doing fine and all is well,’ the TV star tweeted.

‘The guest was quickly attended to by on site medical professionals and we are pleased to say is now home and well.’

One guest told The Sun: ‘The garden was packed with lots of people and I think the woman must have fallen into the pond or tripped over and ended up in the water. 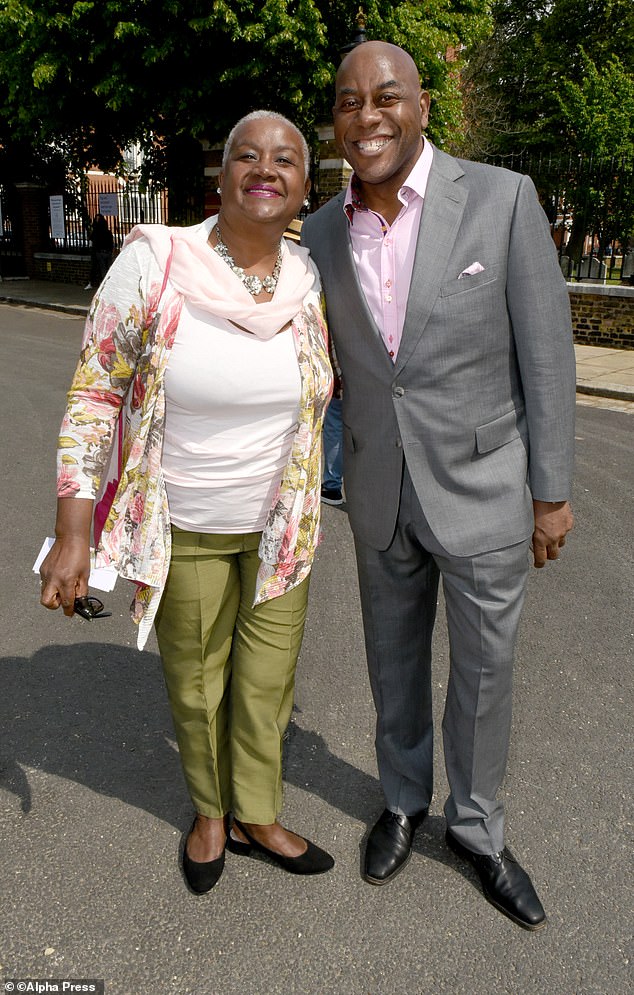 Siblings: Jacqueline was Ainsley’s guest at the VIP preview of this year’s Chelsea Flower Show on Monday (pictured together at the 2019 show) 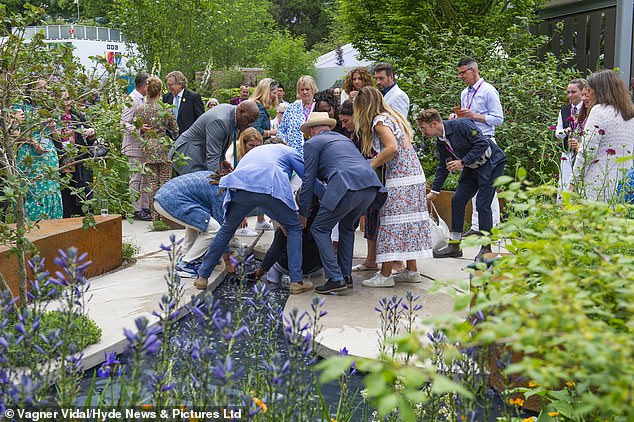 Incident: The TV chef saved his sibling from drowning according to onlookers after she tripped and fell into the water, as others including Nick Knowles looked on

Update: Paramedics arrived shortly after she was pulled from the water, with Ainsley later tweeting that she was ‘doing fine’

‘I think she nearly drowned. She was pulled out by Ainsley Harriott and some other celebrities before they laid her down on the floor. She was coughing up lots of water.’

Nick Knowles was seen watching on as Ainsley helped his sister, after previously being photographed arriving at the event with his girlfriend Katie Dadzie.

Matt Peskett, an RHS volunteer who saw the accident, told The Telegraph that he was scheduled to show visitors around the garden during the public opening on Tuesday, but now officials have put barriers in place which could limit the tours.

Mr Peskett explained: ‘There were 30 or 40 celebs out and they were all drinking champagne. And then all of a sudden one of the guests stepped backwards and fell in. They fully fell in, not just a foot.

‘I hope they don’t keep it like this tomorrow – it would be a shame.’ 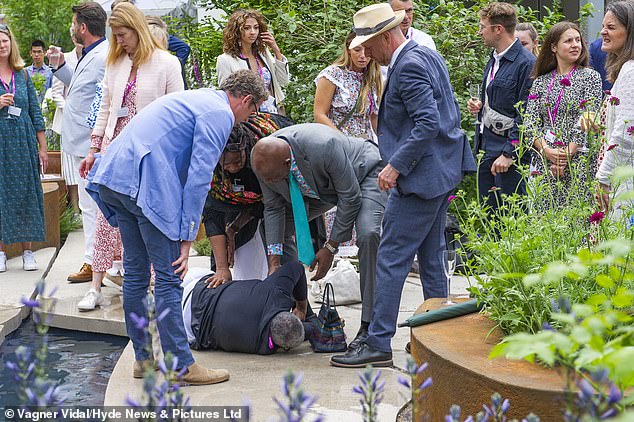 Fall: Ainsley was seen checking on his sister with other passers-by as she lay on the ground next to the garden pond feature in the grounds of Chelsea Hospital

Representatives for Ainsley and the Chelsea Flower Show have been contacted by MailOnline for comment.

Jacqueline has been a regular guest of Ainsley’s at the Chelsea Flower Show over the years.

After 39 years working as a teacher in senior schools and further education colleges, she is now retired and is a committee member for the Croydon branch of U3A – an international movement whose aims are the education and stimulation of mainly retired members of the community.

Jacqueline and Ainsley, along with their brother Chester, are the children of Jamaican-born pianist and singer, Chester Leroy Harriott.

Ainsley previously opened up about his relationship with Jacqueline in an interview with the Guardian, revealing she still tries to take control of his cooking even after he shot to fame as a chef.

He said: ‘I made something quite Caribbean-y on stage at the Commonwealth Institute many years ago, and my mother was in the audience and called out, “don’t forget to turn down the heat, Ainsley!”

‘Then my sister shouted, “and don’t forget to do the onions.” My sister, when she comes over, will say, “I saw your programme the other day and you did OK.” But that’s it for the praise. I take it on the chin. She’ll stir things I’m cooking at home and take control.’ 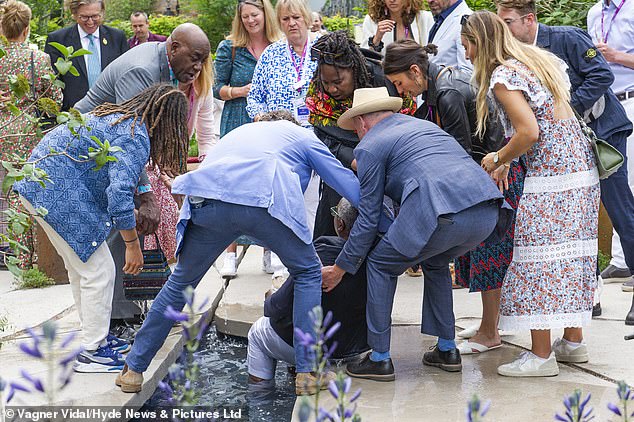 Tripped: Ainsley’s sister ingested a large amount of water and had to be pulled out of the narrow water feature by the celebs who were at the BBC display

The Chelsea Flower Show has returned to its traditional May slot with gardens focusing on wildlife, wellbeing and floral displays to mark the Platinum Jubilee.

Celebrities and members of the royal family are getting a first look at the Royal Horticultural Society’s showpiece event on Monday, before it opens to members of the public.

The exhibit where Ainsley’s sister fell has been created by BBC Earth and RHS and designed by Joe Swift. It features a raft of species that help to sustain bees, which are in decline in the UK and more widely.

The BBC Studios Our Green Planet and RHS Bee Garden design includes the silhouette of a bee wing as the centrepiece for planting including salvias, hardy geraniums, and euphorbias as well as shallow water for insects to drink from, mud for bees to make nests and a dismantlable bee hotel. 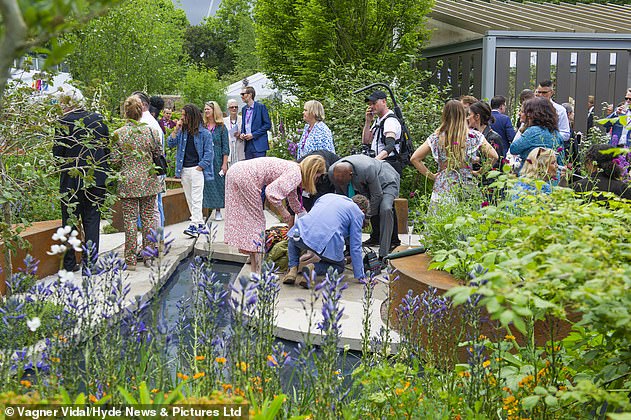 Medical attention: Paramedics arrived shortly after she was pulled from the water, with Ainsley later tweeting that she was ‘doing OK’ 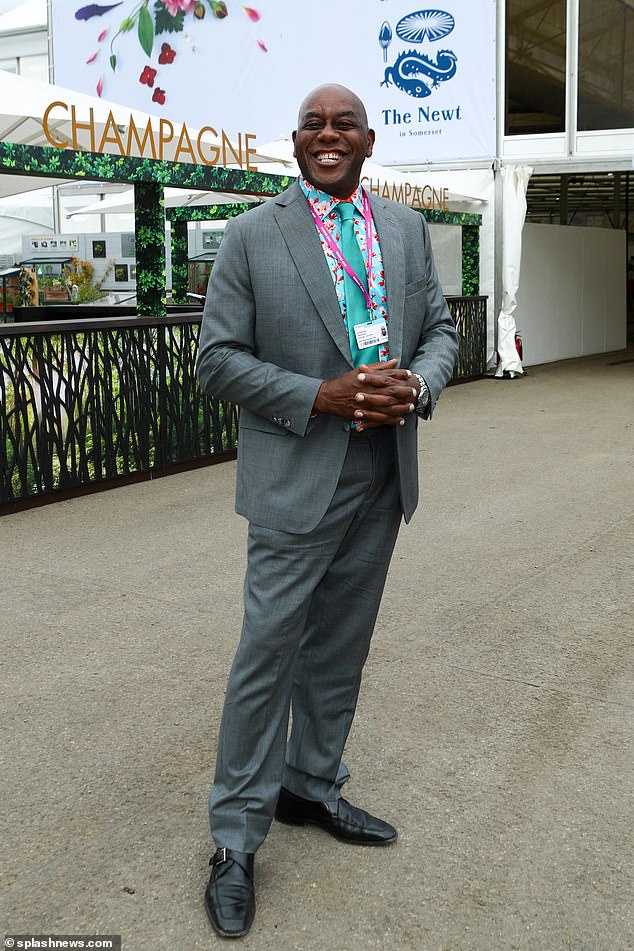 Celebrity guest: Ainsley was earlier pictured arriving at the event, which hosted a press and celebrity preview on Monday ahead of its opening to the public

The Mind Garden focuses on connecting with other people for mental health and St Mungo’s Putting Down Roots garden focuses on a programme to help people recover from homelessness through gardening.

A floral display with the profile of the Queen in Platinum Jubilee purple marks her 70-year reign.

It is covered on both sides with an assortment of native British-grown tree branches with connecting inner shelves arranged with 70 terracotta pots planted with lily of the valley, one of the monarch’s favourite plants.

Another installation aims to transport visitors to one of the Queen’s favourite places, with a canopy of flowers including fresh delphiniums, emulating the colours and planting of the Scottish landscape near the royal family’s Balmoral Castle estate in Aberdeenshire.

The Chelsea Flower Show is back in its May slot for the first time since 2019, after being cancelled in 2020 and moved to September for 2021 due to the pandemic. 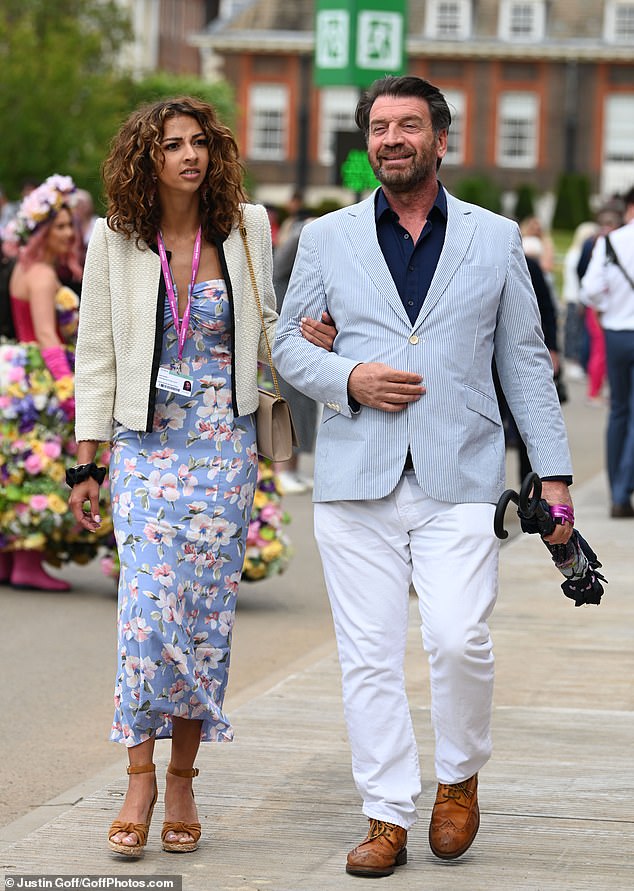 VIP opening: Nick Knowles was seen watching on as Ainsley helped the woman, after previously being photographed arriving at the event with his girlfriend Katie Dadzie 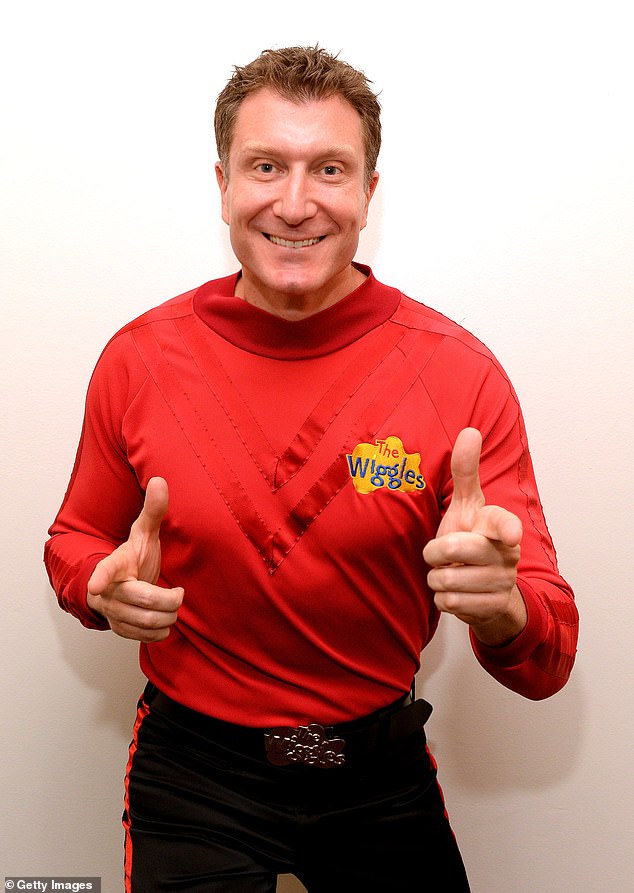 Advertisement Red Wiggle Simon Pryce, 50, reveals the ‘anxiety and stress’ behind the scenes of The Wiggles By A. James Daily Mail Australia Published: 00:56 EDT, 27 March 2022 | Updated: 00:56 EDT, 27 March 2022 Advertisement Wiggle Simon Pryce has revealed the mental strain behind the fun filled high energy shows that have made… 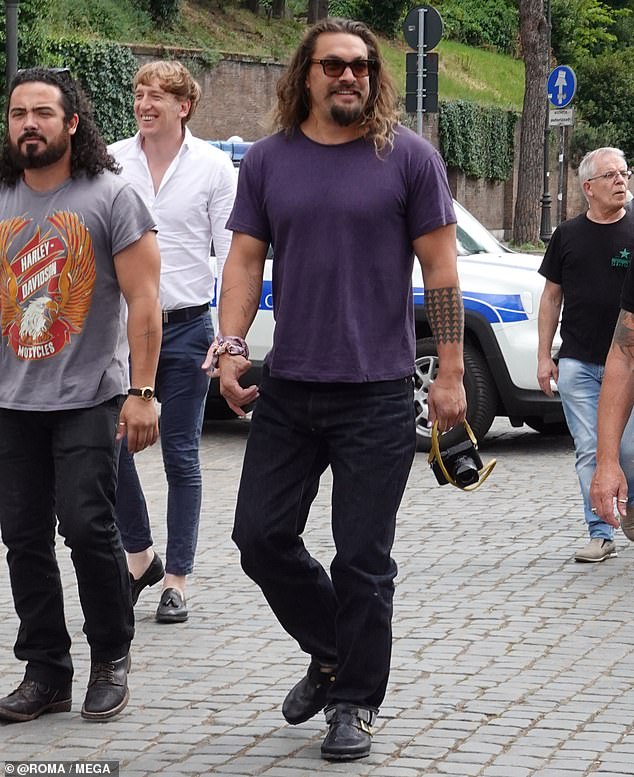 Advertisement He’s been busy filming in Rome for the upcoming Fast And Furious 10: Fast X.  And Jason Momoa showed off his muscular frame as he took a break from filming to visit the Colosseum on Monday.  The 42-year-old actor donned a pair of black jeans and a purple T-shirt as he beamed while sightseeing with… 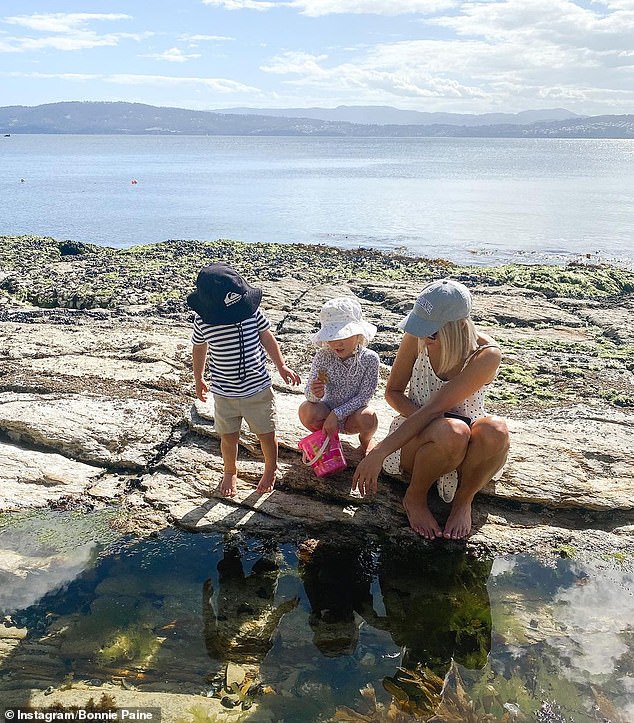 Advertisement Embattled cricket star Tim Paine was nowhere to be seen as his wife Bonnie spent time at the couple’s waterfront holiday home in Tasmania with their two children this week.  The mother-of-two posted several photos of herself and the couple’s daughter Milla, four, and son Charlie, two, as they enjoyed a getaway at the… 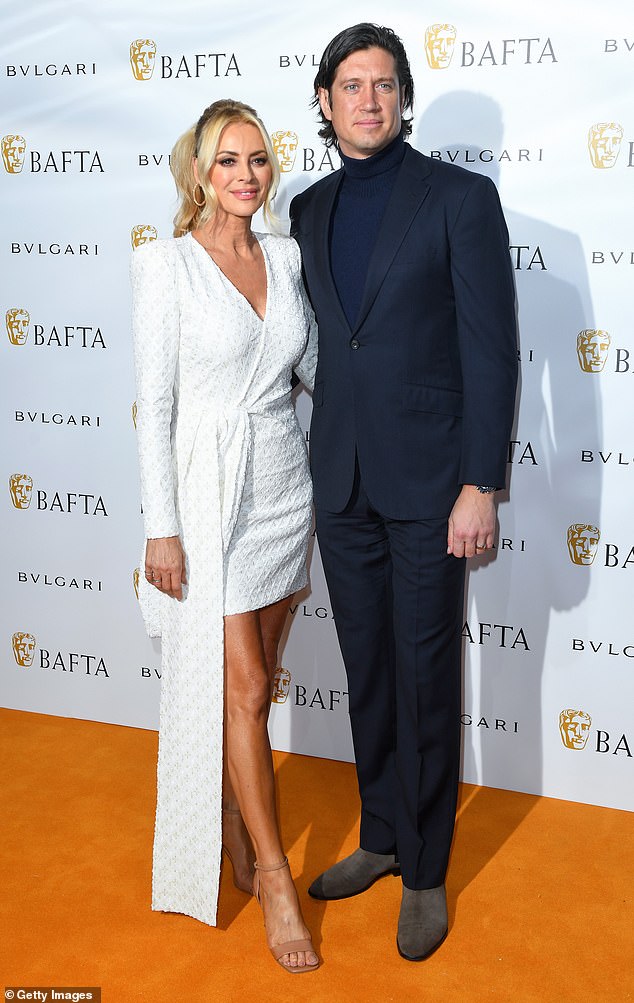 Advertisement Tess Daly made a very stylish arrival with her husband Vernon Kay at the British Academy Film Awards 2022 Gala Dinner at The Londoner Hotel on Friday night. The TV presenter, 52, put on a leggy display in a white mini dress featuring a plunging neckline and sleeves as she posed up a storm alongside… 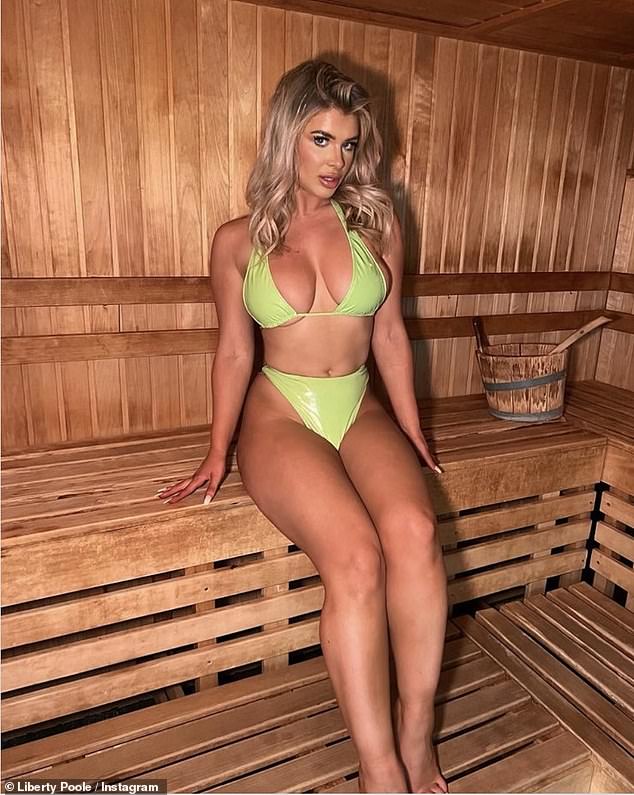 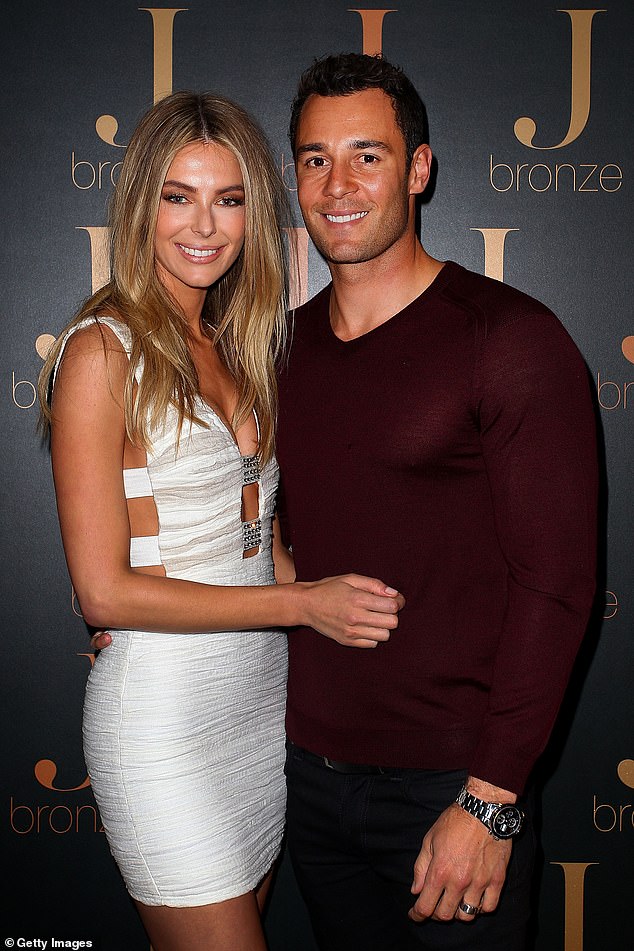