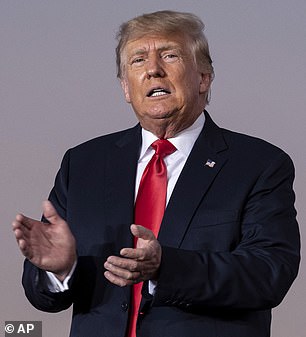 Alaska Governor Mike Dunleavy thanked Donald Trump for endorsing his re-election bid on Friday, implying he also accepts the ex-president’s request to not support his fellow Republican, Senator Lisa Murkowski, to keep her seat in 2022.

A statement released by Trump’s Save America PAC hours before midnight of the near year featured the GOP governor saying there was ‘nothing to worry about’ regarding Murkowski.

Trump endorsed Alaska’s incumbent governor earlier last week – subject to his ‘non-endorsement of Murkowski,’ one of the former president’s strongest opponents, who he said has been ‘very bad for Alaska.’

He echoed the same sentiment on Friday, praising Dunleavy while calling the Republican senator a ‘disaster.’

Murkowski was one of seven Senate Republicans who crossed the aisle to vote for Trump’s conviction in his February impeachment trial for his role in the January 6 riot at the Capitol.

Dunleavy’s apparent acceptance of Trump’s request to shun Murkowski is emblematic of the growing divide within the Republican Party, less than a year until the 2022 elections.

‘This is why Mike Dunleavy of Alaska has been, and will be, a great Governor. He has the courage of his convictions,’ Trump said. 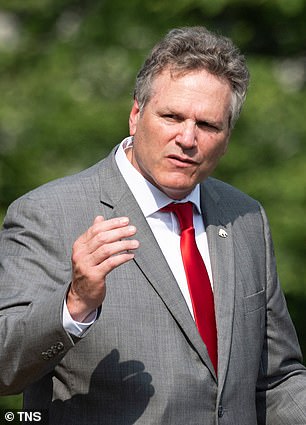 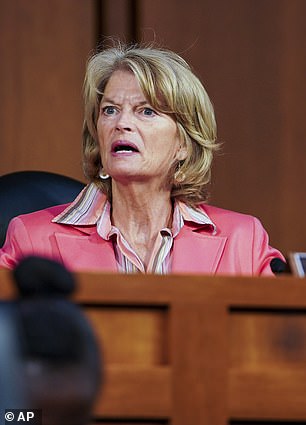 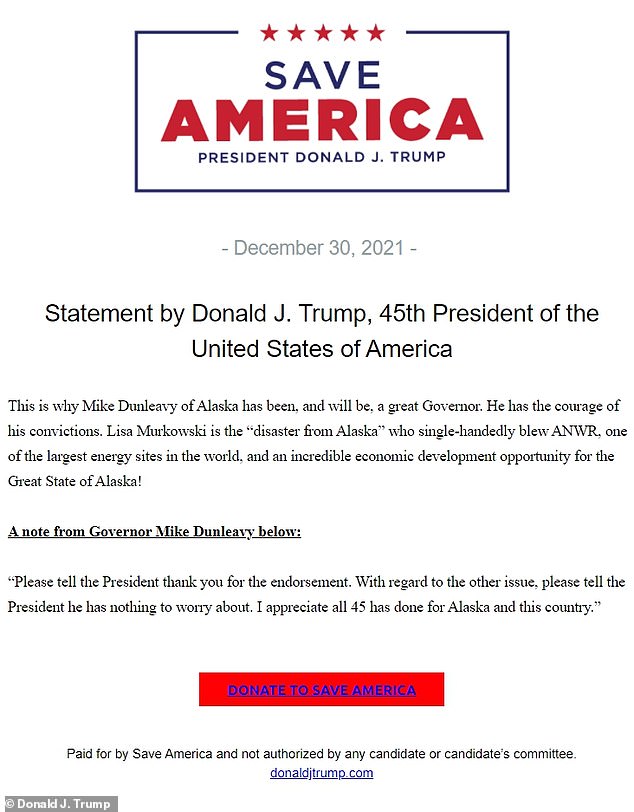 ‘Lisa Murkowski is the “disaster from Alaska” who single-handedly blew ANWR, one of the largest energy sites in the world, and an incredible economic development opportunity for the Great State of Alaska!’

DailyMail.com has reached out to Murkowski’s office for comment.

On Tuesday Trump said that should Dunleavy support Murkowski, his endorsement of the Republican governor ‘is null and void, and of no further force or effect.’

Otherwise, the candidate has his ‘Complete and Total Endorsement.’

‘Mike Dunleavy has been a strong and consistent Conservative since his time in the Alaska State Senate,’ Trump said in the statement.

‘I was proud to endorse his first run for Governor, and I am proud to support his reelection, too. Alaska needs Mike Dunleavy as Governor now more than ever.’ 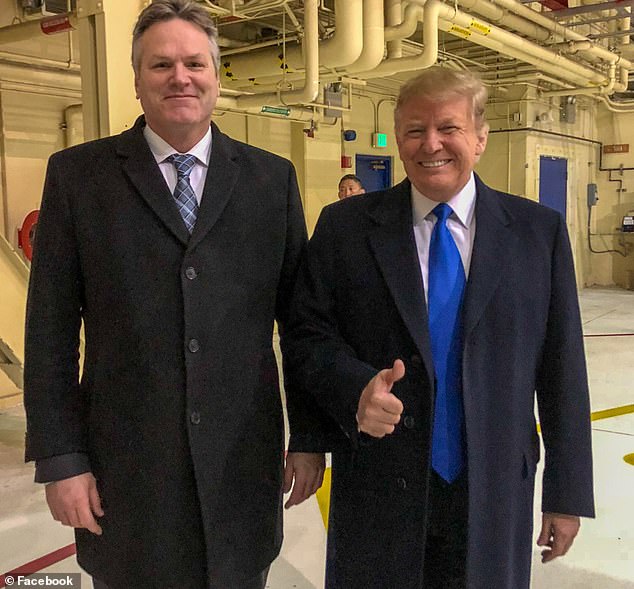 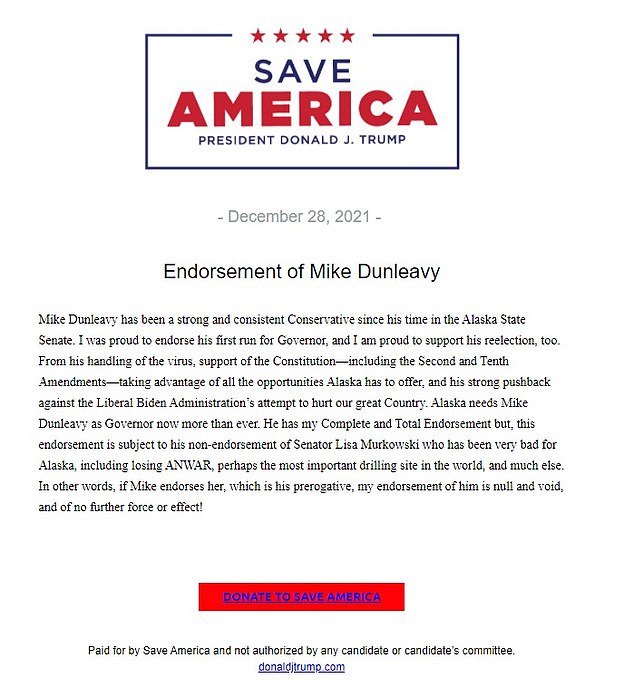 Should Dunleavy support Murkowski, Trump wrote his press release through his Save America PAC, his endorsement of the Republican governor ‘is null and void, and of no further force or effect’

In June, the Biden administration halted all oil and natural gas drilling on the non-wilderness Coastal Plain (1002 Area) of the Arctic National Wildlife Refuge (ANWR) pending an environmental review.

But Trump blamed Murkowski for the loss, citing her support of ‘Radical Left Biden appointees, which in turn led to the revocation of ANWR drilling, which Alaskans have been fighting to see happen for six decades,’ costing the state ‘billions and billions of dollars,’ according to Alaska Public.

‘I think she will be met very harshly by the Alaska voters in 15 months, and I will be there to campaign against her!’ Trump wrote in a June 7 statement.

Dunleavy is facing a primary challenge from state Representative Christopher Kurka as he runs for his second gubernatorial term. 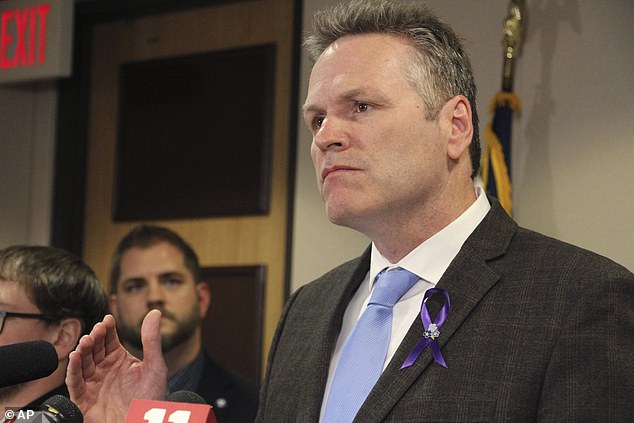 Murkowski is the only one among the seven Republicans who voted to impeach Trump who is running for reelection in the 2022 midterm elections.

The moderate Republican with a history of working across the aisle to reach bipartisan agreements announced her reelection campaign in November. But winning over Alaska’s Republicans will prove difficult after her handling of Trump’s impeachment trial.

She earned Trump’s ire and distanced herself from his base after she opposed the confirmation of Trump-nominated Supreme Court Justice Brett Kavanaugh. She also voted against a Republican-backed plan to repeal Obamacare in 2017.

Dunleavy, on the other hand, has aligned himself with the Trump agenda, supporting the former president when he refused to concede the 2020 election.

‘I, for one, will support our president’s efforts to ensure that the election is completed with integrity. Let us hope and pray that it is,’ Dunleavy wrote in a statement last November. 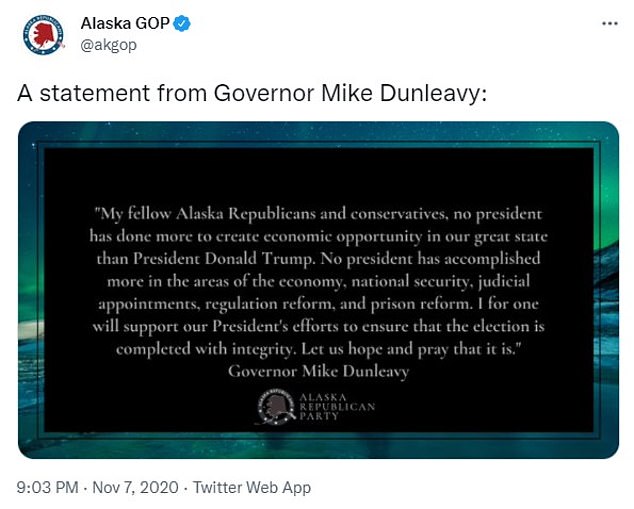 Dunleavy has aligned himself with the Trump agenda, supporting the former president when he refused to concede the 2020 election

Murkowski was appointed to the U.S. Senate in 2002 after her father, Frank, resigned from his seat after he was elected governor.

He is scheduled to hold a fundraiser for Murkowski’s opponent at his Mar-a-Lago resort in Palm Beach, Florida in February, and several leading members of Trump’s 2020 presidential reelection campaign are working for Tshibaka’s campaign as advisers.

‘Murkowski has got to go!,’ Trump wrote in June. ‘Kelly Tshibaka is the candidate who can beat Murkowski — and she will. Kelly is a fighter who stands for Alaska values and America First. She is MAGA all the way, pro-energy, strong on the Border, tough on Crime and totally supports our Military and our great Vets.’