Approval ratings for Rishi Sunak have plummeted since he delivered his Spring Statement a fortnight ago.

The public may be able to forgive the Chancellor over the soaring cost of living. He cannot be blamed for Vladimir Putin’s war or runaway inflation, which is the Bank of England’s job to fix.

He must, however, take responsibility for his botched mini-budget of last September. He caught the public and business unawares with a 1.25 percentage-point hike for citizens and employers national insurance contributions (NICs), which takes effect from today, the start of the 2022-23 fiscal year. 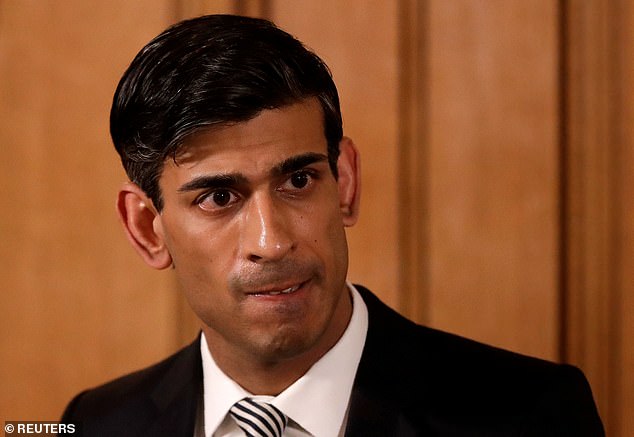 Gamble: The public may be able to forgive Rishi Sunak over the soaring cost of living, but he must, however, take responsibility for his botched mini-budget of last September

The £14billion of extra revenues detailed in the Budget Red Book, together with surging wealth taxes and extra cash which comes with freezing allowances, may be terrific for the public finances.

But taxpayers need to be disabused of the notion that because the NIC increase will appear on the next payslip as the ‘NHS and social care levy’ that it is anything of the kind.

The money will not be ring-fenced and the idea that it is going to fix the problems of the NHS, from worrying maternity care to better cancer treatment, is pure fiction.

As for social care, the ball has been kicked down the road for at least two years. Even a public besotted by the NHS has its doubts, with 39 per cent complaining in the British social attitudes survey that it wastes money.

It would have been far wiser to set about costs, wastefulness and efficiencies than throwing money at the problem. The bigger reason for cancelling the NHS and social care rise is economic.

In case Rishi isn’t watching from his apartment in Santa Monica there is ghastly conflagration taking place in the heart of Europe, higher energy prices are delivering a massive squeeze on real incomes and there is a history of oil price surges being followed by recession.

And if you don’t think this is the 1970s all over again then look at 1914, the interruption to globalisation and what John Maynard Keynes observed was an end to ‘an extraordinary episode in the economic progress of man’.

At a moment when globalisation is in retreat and central banks finally are attending to runaway inflation by slowing the presses and raising interest rates, lumbering people with higher taxes is retrograde.

There is a risk it will bankrupt businesses and that will stymie tax revenues, which boomed as Covid restrictions were lifted.

In his sub-octane statement Sunak started to recognised he had made a mistake through a national insurance giveback and a promise of an income tax cut to come. The Treasury and the bankers also are looking at loan guarantee scheme to help enterprises stymied by high energy costs.

The British Chambers of Commerce, representing small and medium-sized businesses, are demanding he spike the hike.

None of the larger democracies in the free world, other than the UK, are raising taxes in what are wartime conditions.

British exceptionalism could push a growing economy over a precipice.

Russia may be losing the shooting and moral war on Ukraine but there is one small win. When its brutal invasion began the rouble plunged 30 per cent and central bank governor Elvira Nabiullina wanted out.

Putin used his persuasive powers and she stayed. Nabiullina put her shoulder to the wheel, raised interest rates from 9.5 per cent to 20 per cent, imposed swingeing exchange controls and overseas investors were prohibited from trading Russian stocks.

The rouble recovered, gifting Putin a success as he faced down economic sanctions. Reality for Russian citizens is soaring food prices, recession and the impossibility of taking their money with them if they try to flee the country.

As the rouble is the global face of the Russian economy, Putin can claim to be triumphant. But, as on the battlefield, it is a Pyrrhic victory.

Addicts of the BBC’s The Apprentice might question whether Alan Sugar’s instincts have let him down in 2022.

New business partner Harpreet Kaur plans to use Baron Sugar’s £250,000 of capital to scale up her retail offer of delicious desserts.

He failed to see the value of candidate Stephanie Affleck’s plan for an online, kitemarked market for used childrenswear.

Opportunity perhaps for M&S to snap her up to help run its new peer-to-peer marketplace to recycle outgrown kids’ clothes.