Actress Diane Kruger has told how the gun tragedy in which cinematographer Halyna Hutchins was killed on the set of Rust has changed her working processes. Kruger, 46, plays a femme fatale in the period crime drama Marlowe, which will be released in December.

She said this week that she refused to fire an unloaded vintage gun during filming last year. ‘These guns are really different,’ she explained. ‘They’re really old guns. I actually was scared to fire it, so I didn’t do that.’ Her co-star Liam Neeson agreed, saying: ‘The whole Alec Baldwin thing is very close to all of us.’

Hutchins was shot last year as Baldwin practised drawing an old revolver. He denies pulling the trigger and says he was wrongly told the gun was not loaded with live ammunition. This week the Santa Fe County District Attorney’s Office said four people — including Baldwin — will be charged over the fatal shooting, if prosecutors decide it is warranted. 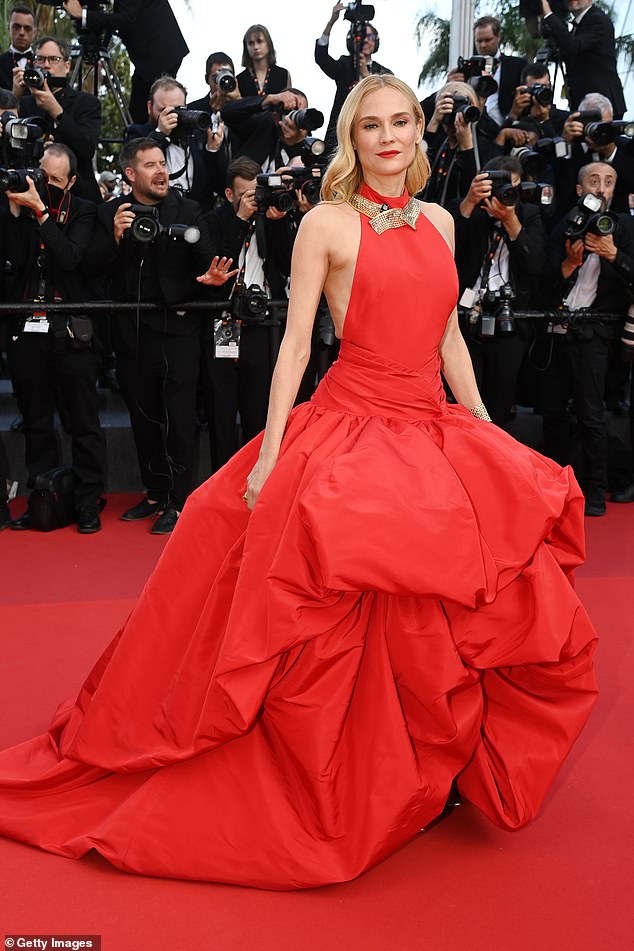 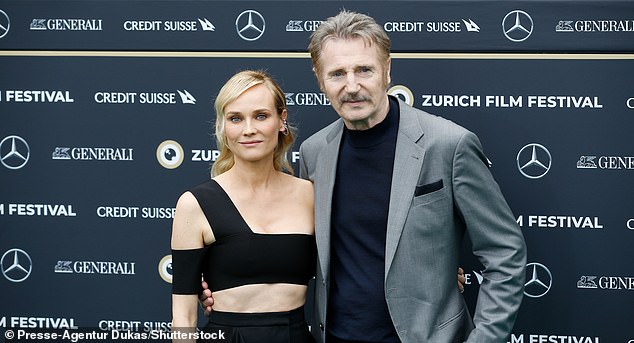 Kruger’s (left) co-star Liam Neeson (right) agreed, saying: ‘The whole Alec Baldwin thing is very close to all of us’

Marlowe is based on Raymond Chandler’s famous detective Philip Marlowe, and is set in 1930s LA. Neeson, who plays the wisecracking gumshoe, turned 70 this year and ad libs in the film that he is ‘getting too old’ for fights.

In real life, he admits he sometimes struggles with the modern world. ‘I have two sons, and I do hate kids calling you by your first name.

‘I say: ‘There’s only two people who can ever call me Dad or Pops or Daddy. That’s you two. Don’t ever call me Liam.’ ‘

Actor Kevin Spacey is continuing his attempts to rehabilitate his image — and has denied, in court papers, that he is a sex addict.

Spacey, who finished making a yet-to-be-released, low-budget thriller Peter Five Eight last year, will bid to clear his name in court in New York next month.

In documents filed ahead of time, the disgraced actor said he did not seek treatment for sex addiction when he checked into a rehab centre in Arizona in 2017, after he was first accused of sexual misconduct.

He did reveal, though, that he was ‘as emotionally fragile as I have ever been in my life’, because he had just come out as gay. 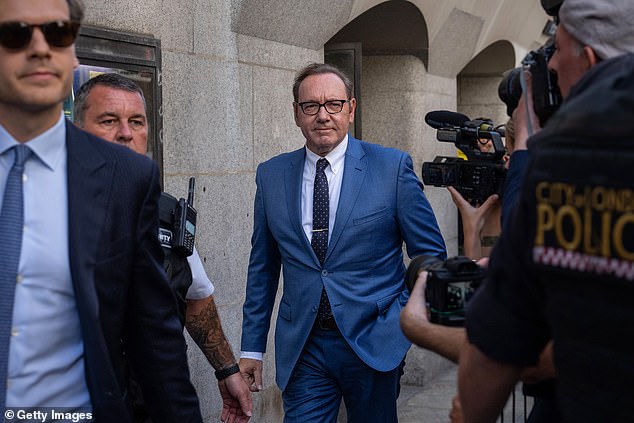 Actor Kevin Spacey is continuing his attempts to rehabilitate his image — and has denied, in court papers, that he is a sex addict

At the time, Spacey had been fired from the Netflix drama House Of Cards; and U.S. website Buzzfeed had accused him of making sexual advances towards a 14-year-old aspiring actor. Anthony Rapp, who is now 50, will face off against Spacey in a civil suit in New York, in which he is seeking $40 million for battery and infliction of emotional distress. In a deposition in the case, the actor was asked by one of Mr Rapp’s lawyers if he was in ‘limbo’ in late 2017, after the Buzzfeed article came out with Mr Rapp’s claims in it.

Spacey said: ‘There was a period of time where I did not know what was going to happen.’ He found out on Thanksgiving that year he had been ‘removed’ from House Of Cards, Netflix’s adaptation of Michael Dobbs’s political novel, in which he starred as Machiavellian Congressman Francis Underwood.

By then, Spacey had already checked himself into rehab in Wickenburg, Arizona. Asked what type of rehab he was undergoing, Spacey said he was ‘not sure what degree I’m able to talk about the work I went there to do’.

But he added: ‘I can only tell you that I was as emotionally fragile as I had ever been in my life. I had just come out [as gay], after having been private about my personal life for more than 30 years. I was being accused of things in the media and I went to go to take care of myself.’

Spacey was referring to a post on Twitter in October 2017 in which he said he did not remember the encounter with Mr Rapp.

But he said if he did behave as Mr Rapp claimed, then he would ‘owe him the sincerest apology for deeply inappropriate drunken behaviour’. In the deposition, the actor was asked if he was treated for alcohol addiction in rehab, but his lawyers objected.

Spacey won an Oscar for his role in 1995’s The Usual Suspects, and a second for American Beauty in 2000. In 2015 he received an honorary knighthood and an Olivier award for his contributions to British theatre. But since the allegations emerged, he has become something of a pariah in Hollywood.

In August a judge in the U.S. ruled he must pay $31 million to MRC, producers of House Of Cards. He was sacked following allegations of improper conduct against young men he’d worked with — his departure requiring costly changes to the storyline.

The late Helen McCrory’s final film will be released in November. Called Charlotte, it’s the animated tale of German Jewish artist Charlotte Salomon, who painted a 761-strong series of works telling the story of her life while she was in the South of France, hiding from the Nazis.

Salomon was murdered, while pregnant, at Auschwitz in 1943. Keira Knightley voices Charlotte, and McCrory her stepmother, Paula, who was a renowned singer.

A dog’s life on set with team Tilda

Tilda Swinton is crazy about her springer spaniels, and one — Louie — is emerging as a film star in his own right, thanks to a significant role in her new film, The Eternal Daughter.

Swinton plays both Julie and her mother Rosalind in the ghost story, and Louie (who plays Julie’s dog) apparently had the time of his life making the picture, which is set in a spooky old hotel.

Three of Swinton’s other springers — Snowbear, Dora and Rosy — appeared with their mistress in The Souvenir Part II last year, but I’m told their roles were much smaller than Louie’s.

A fifth dog, Dot, has yet to make her screen debut. In an interview in The Guardian, the actress explained that ‘Dot is a free radical. She’s not inclined to do take after take of anything. She is above all this. She is much too evolved.’

TV drama Inside Man begins with a sequence in which a young man threatens a woman on a Tube train while those around her sit by and do nothing.

Writer Steven Moffat said: ‘I have been a coward on many such occasions myself and it preoccupies me how weak men can be in the face of such intimidation.’

The series, which stars David Tennant and Stanley Tucci, concludes on Monday and Tuesday of next week.

Dara O’Briain will have hosted all 21 series of BBC2’s Mock The Week by the time the show ends later this year, but says he’s never had any say in which comedians are booked to appear alongside him. 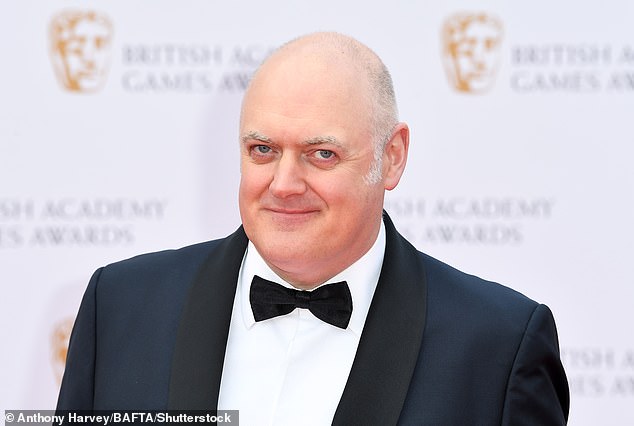 Dara O’Briain (pictured) will have hosted all 21 series of BBC2’s Mock The Week by the time the show ends later this year, but says he’s never had any say in which comedians are booked to appear alongside him

‘Ed Byrne is a regular guest, but he isn’t on the show because he’s a friend of mine — he’s on because the producers saw him doing a best man’s speech at my wedding and thought: ‘He’s funny!’ ‘

Dara, left, admits not all the guests have been to his liking. ‘There was the odd difficult one, but you’ll have to wait for the memoirs — the working title for which is: ‘It’s Over, So Let’s Burn Those Bridges’ — before I reveal all.’

The future of hit sitcom Motherland is in doubt, with its stars victims of their own success. Diane Morgan, who plays single mum Liz, said: ‘We’d like to do more, but bringing us all together is proving to be extremely difficult — maybe impossibly difficult.’

Since the Bafta-winning show started in 2016, Diane and co-star Anna Maxwell Martin have been rarely off our screens. Diane’s new Netflix/BBC series Cunk On Earth is currently on BBC2, while Anna will appear in ITVX drama A Spy Among Friends later this year.

The last waltz for Anton and Erin?

They met 25 years ago, turned pro together, joined Strictly together and — after she left the show — continued to dance together every year on their own national tour. But Anton du Beke and Erin Boag’s professional partnership appears to have come to an end. There will be no Anton & Erin tour this year, for the first time since 2009.

Instead, du Beke, 56, will be spending six weeks on the Strictly Come Dancing arena tour in January and February. And later in the year, the popular dancer-turned-judge will star in his two-man show — Him And Me — with fellow Strictly star Giovanni Pernice. 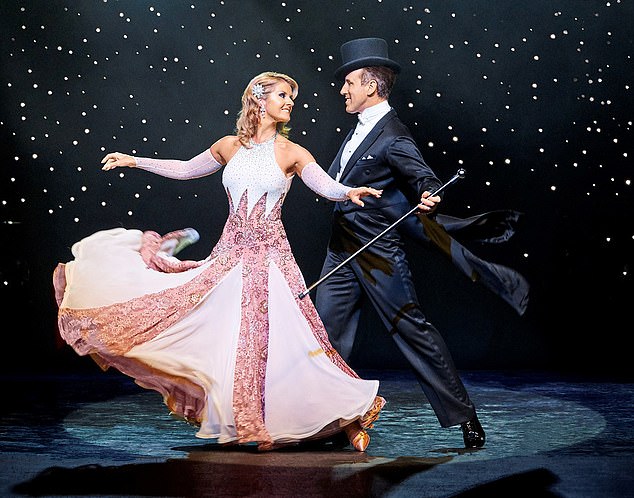 The Strictly tour famously offers rich rewards for the judges and contestants, and it’s said that du Beke stands to make double what he would have on his recent tours with Erin, 47.

It runs from January 20 to February 12, and will visit Birmingham, Nottingham, Leeds, Manchester, Sheffield, Newcastle, London, Belfast and Glasgow.

Du Beke, from Sevenoaks, Kent, and Erin, from Auckland, New Zealand, met in 1997. They became dance partners and turned professional in 2002, and were chosen in 2004 to appear in the Beeb’s first series of Strictly.

Both Amazon and HBO have found themselves the target of racist trolls for including actors of colour in the fantasy worlds of Lord Of The Rings and House Of The Dragon this autumn.

And it seems Disney may be the next to sail into perilous waters in the much-anticipated blockbuster sequel Avatar: The Way Of Water. 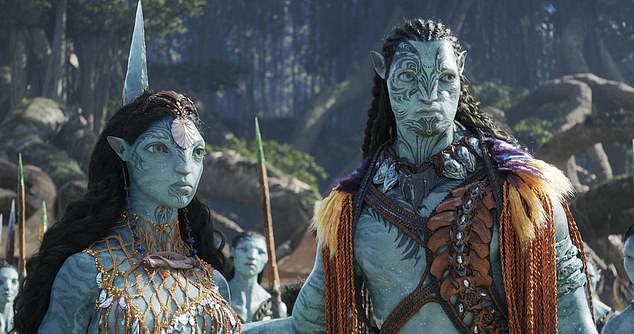 It seems Disney may be the next to sail into perilous waters in the much-anticipated blockbuster sequel Avatar: The Way Of Water (pictured is Tonowari and his wife Ronal, played by Kate Winslet)

A re-release of the 2009 original Avatar reached No 1 on the global box office chart last weekend. Figures show that 93 per cent of the audience in the U.S. watched James Cameron’s film in 3D.