The Senate in a rare occasion voted unanimously to suspend Russia’s ‘most-favored-nation’ trade status and ban oil imports on Thursday.

The trade relations vote was the first 100-0 roll call vote since a Crime Victims Fund bill last July. Amid Russia’s invasion of Ukraine the Senate has been putting on a rare display of bipartisanship with three unanimous votes in two days – Wednesday night approving by voice vote a program that allows the president to provide unchecked arms and aide to Ukraine at rapid speed.

In a roll call vote, each senator goes on record voting yes or no for a measure, whereas in a voice vote members are asked to shout out aye or no all at once.

Biden has already taken executive action to ban Russian oil, natural gas and coal in the U.S., but congressional action codifies the move.

Stripping Russia of its most-favored-nation status is a formal step to sever normal trade relations with Russia and allow more import controls on items like platinum, chemicals, iron and steel.

While there was overwhelming support for ending Russia’s preferential trade treatment, Sen. Rand Paul, R-Ky., blocked quick consideration of the House-passed trade bill due to concerns its language on who can be sanctioned for human rights abuses was too broad and could be ripe for abuse. The House will now have to pass the Senate’s new version of the bill with tweaked language before it heads to President Biden’s desk.

The House is expected to take up the pair of bills later Thursday, getting them through ahead of an April 9 deadline when both chambers will take a two week break. 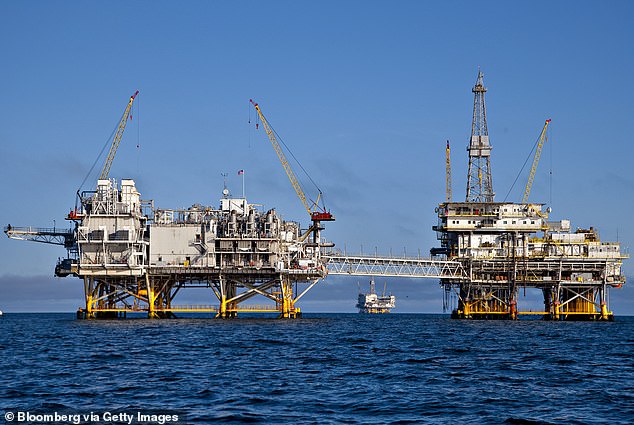 Russian oil account for about 8 percent of U.S.’s supply but accounts for up to 30 percent of Europe’s supply

Sen. Ben Cardin, D-Md., said, practically speaking, the impact of the delay on the trade bill is minimal ‘because there’s virtually no trade right now coming in from Russia.’ Still, he said passage of the bill is important.

‘Messaging is important here and showing action is important,’ Cardin said. ‘You’ve got the Ukrainians on the battlefield every day. The least we can do is get these bills passed.’

The bill gives the president the authority to return normal tariff treatment for Russia as well as resume trade in Russian energy products subject to certain conditions.

Russian oil imports made up only about 8 percent of the U.S.’s supply, but Europe is far more reliant – relying on the Kremlin for nearly 1/3 of their energy. The European Union looks unlikely to enact a similar Russian oil ban.

Franklin Delano Roosevelt’s Lend-Lease program was widely seen as having helped turn the tide against Nazi Germany in World War II – it gave the American president virtually unlimited authority to supply Europe’s Allied countries with weapons, tanks, airplanes and food, among other necessities.

Images and footage coming out of Kyiv and its suburbs in the wake of Russia’s retreat and refocus on the eastern flank sparked international shock and horror. They revealed bodies piled up on the side of the road, some buried haphazardly in mass graves. Some were burned through, others showed signs of torture.

Biden has already cut off normal trade relations with Moscow, banning Russian imports of oil, vodka diamonds and seafood last month. The president has taken steps to cut off Russia from international financing through organizations like SWIFT, the International Monetary Fund and the World Bank. The Treasury Department and the Federal Reserve have blocked Russia’s access to currencies other than the ruble and Biden has targeted the wealth in the U.S. of oligarchs who prop up Vladimir Putin. 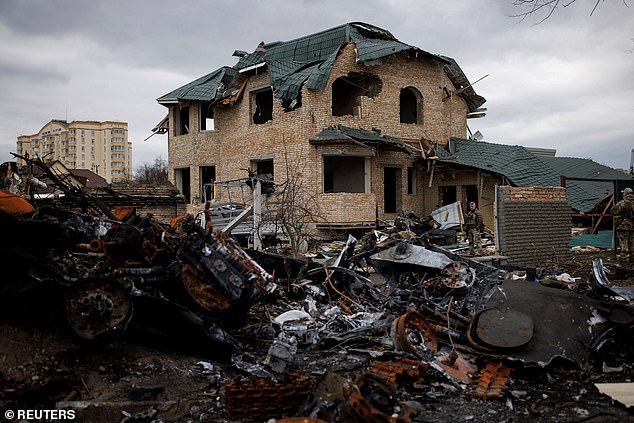 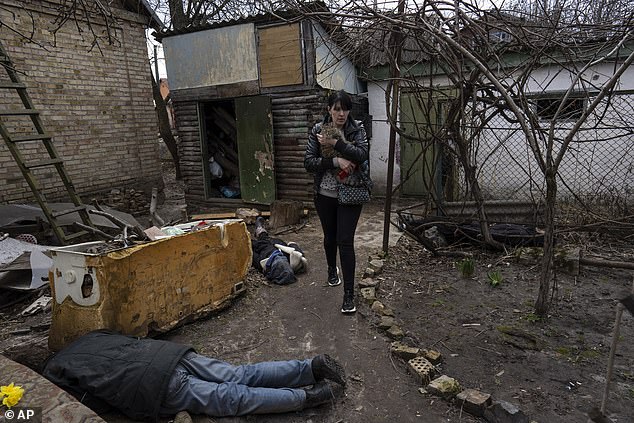 Images show civilians with bound hands. Pictured: Ira Gavriluk walks next to the corpses of her husband and her brother 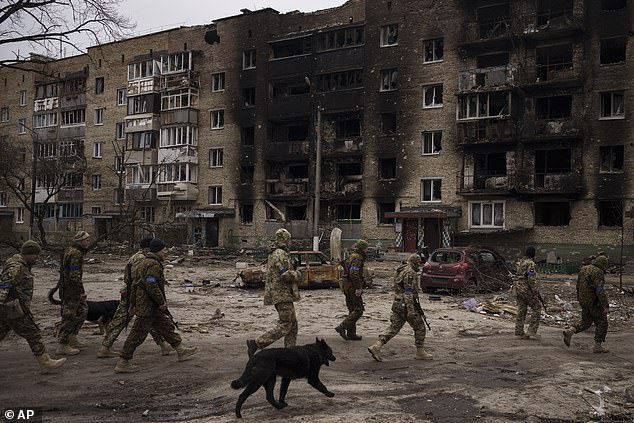 Days ago, the U.S. seized the Tango, a 254-foot luxury yacht owned by oligarch and Putin friend Viktor Vekselberg. And on Wednesday, the U.S. sanctioned Putin’s two eldest daughters, in addition to Russian foreign Minister Sergei Lavrov’s wife and daughter, members of Russia’s Security Council, including former President and Prime Minister of Russia Dmitry Medvedev – who was once seen years ago as a potential reformer – and Prime Minister Mikhail Mishustin.

Biden said Monday he was seeking additional sanctions, as reports came in about atrocities in Bucha.

‘You may remember I was criticized for calling Putin a war criminal,’ he said. ‘Well, the truth of the matter, you saw what happened in Bucha. This warrants him — he is a war criminal.’

‘Most estimates are the Russian economy is now, you know, on track to contract by 10 to 15% over the course of this year, which would be which would be historic,’ said White House economic official Brian Deese at a Christian Science Monitor breakfast with reporters Wednesday.

‘If you track weekly inflation in Russia for the last four weeks, it’s been running at roughly 2% a week. So we’ve all gotten used to monthly inflation data, but 2% a week is like roughly 200% a year,’ Deese said. ‘We don’t expect there to be 200% inflation in Russia because we expect that to level off.’ But he added that is indicative of the ‘extent of the economic challenge that’s operating on the ground in Russia.’

The sanctions are meant in part to undue the ‘social contract’ that Putin has with the Russian people, offering stability and financial security in exchange for his unrivaled power, the administration official said.