I jumped off a volcano with a bloke strapped to my back. Normal behaviour if you live in Tenerife. Locals get a steep discount from Roij Borja and his paragliding company.

This custom kept his Enminube Parapente business afloat during the pandemic. Now that the island is open again, he’s once more shuttling Brits, like me, to the flanks of Mount Teide in a minibus — but we didn’t need it for the long journey back to sea level. We flew.

Taking off from 2,200 metres (7,217ft) we descended through billowing clouds to land on the black volcanic sand of the beach at Puerto de la Cruz, wrapping an English mum and child in guidelines and canopy. (‘Best thing that’s happened to us today,’ laughed mum.) 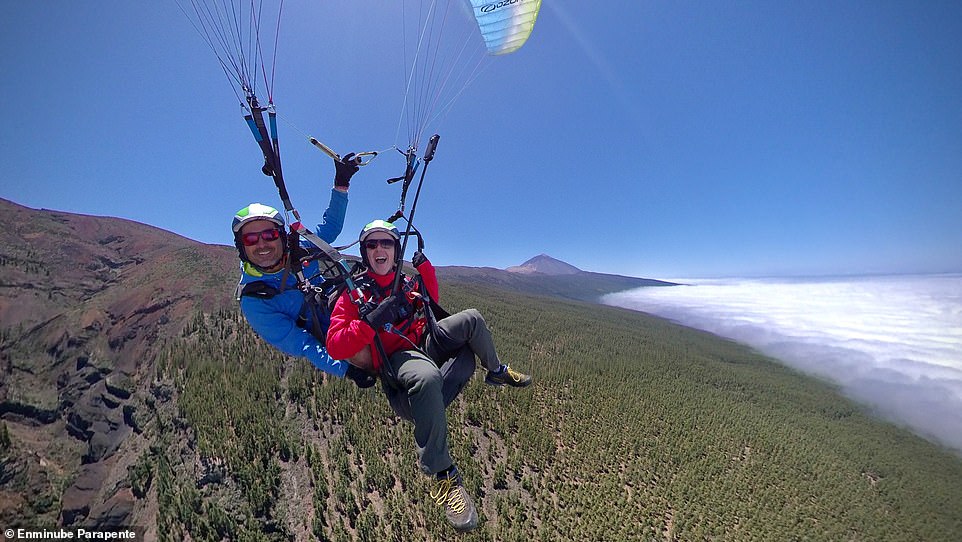 Mount Teide was a stunning backdrop for my maiden flight. I was suspended beneath a ripstop nylon glider that Borja — who did all the work — insisted couldn’t stall in the air.

‘To stall the glider you must make a special manoeuvre using two handles at the same time and pulling down very strong,’ Borja confided.

‘Yes, maybe don’t do that then,’ I thought. Outwardly, I was smiling — a video of the flight is included in the trip’s price — but in my head, I was calculating what I would do if the carabiners worked loose and I started to plummet. Probably best not to focus on that.

‘There are many places around the world that are spectacular for paragliding,’ Borja had told me in the van on the one-hour climb from sea level. 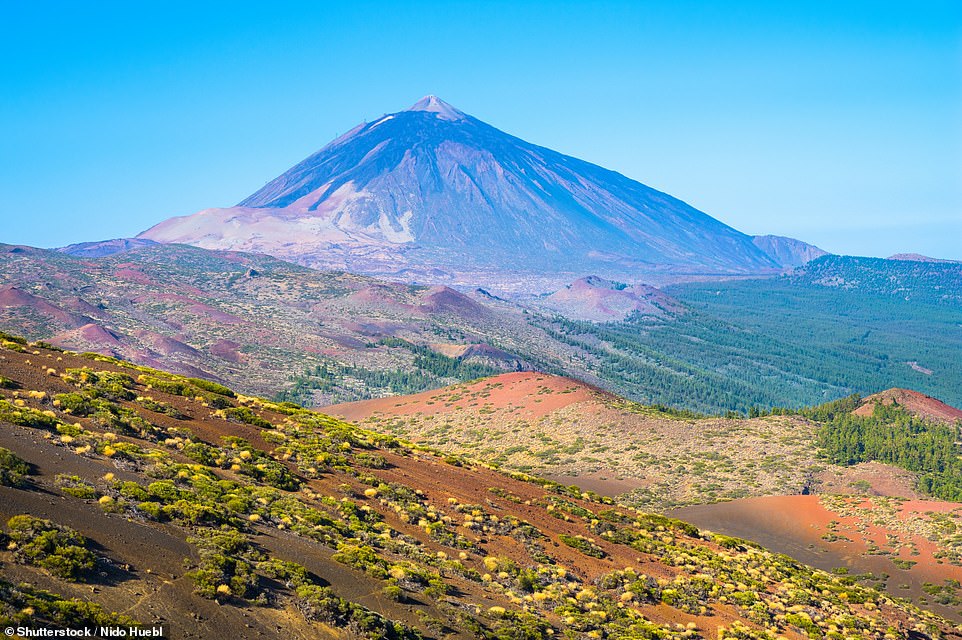 Carlton says that Mount Teide, pictured, was a ‘stunning’ backdrop for his maiden paragliding flight 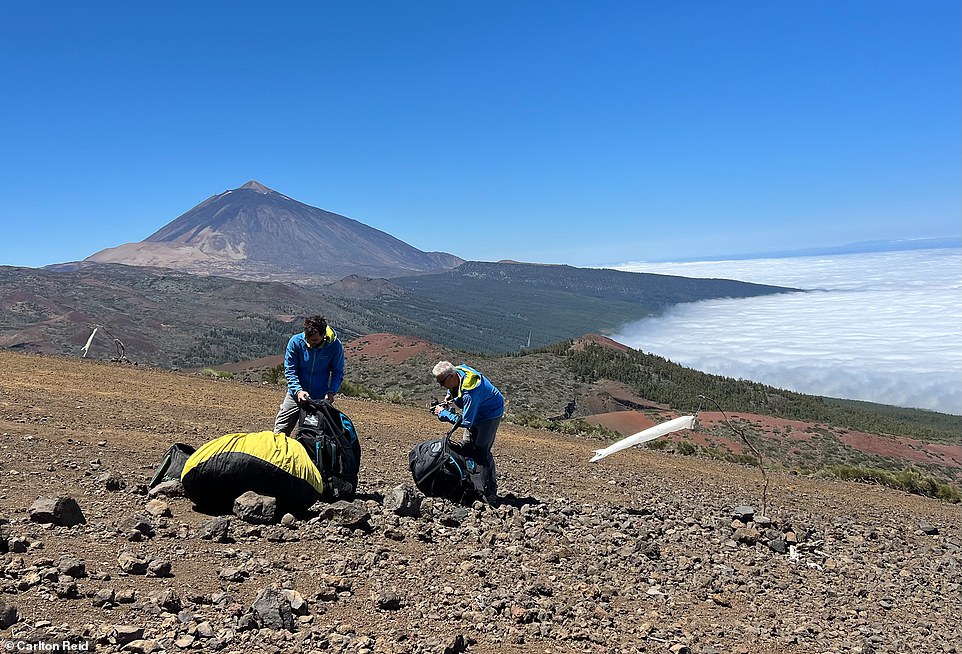 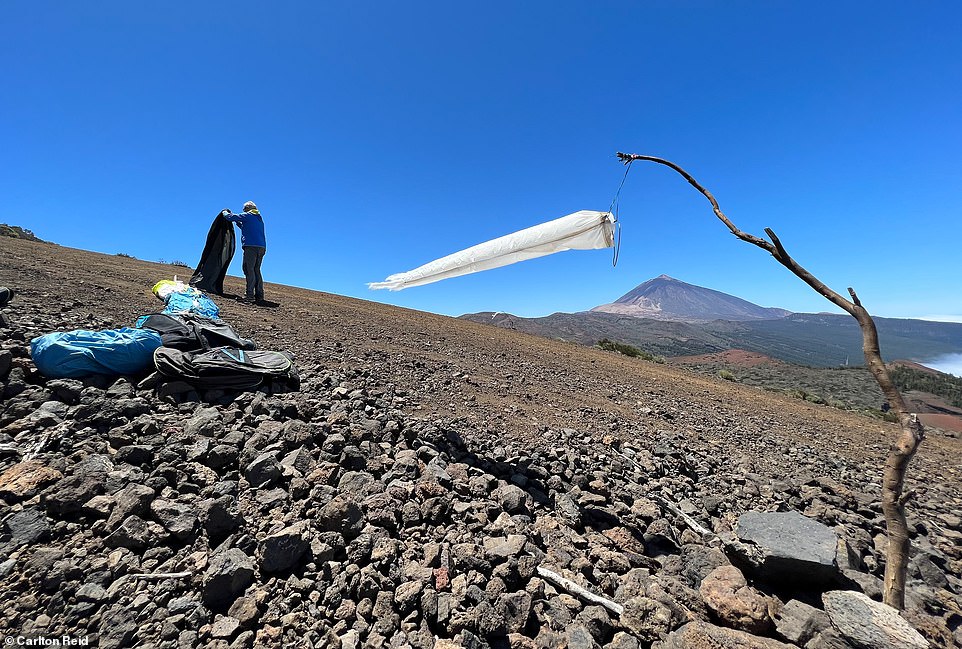 A wind sock, used to determine the speed and direction of the wind, at the Izana take-off zone. ‘Seconds before take-off, we blithely signed a disclaimer form, skim-reading the fact that the “practice of paragliding activities carries serious risks”,’ says Carlton

‘Teide National Park is extra fun because it’s not usual to find a place where you can start at more than 2,000 metres (6,561ft) high and then land on the beach after flying through the clouds.’

Earlier that day, our flight from the La Corona take-off point above the hill town of Los Realejos had been cancelled. The wind direction had flipped, making take-offs too risky.

Six from our eight-person group had already flown from this lower level, but now it was getting unsafe, and Borja gave a choice to the two of us yet to fly: ‘We can cancel and take you to the restaurant where the others will be, or you can miss your meal and we drive for one hour up to the National Park and you will get a flight from there through the clouds.’ 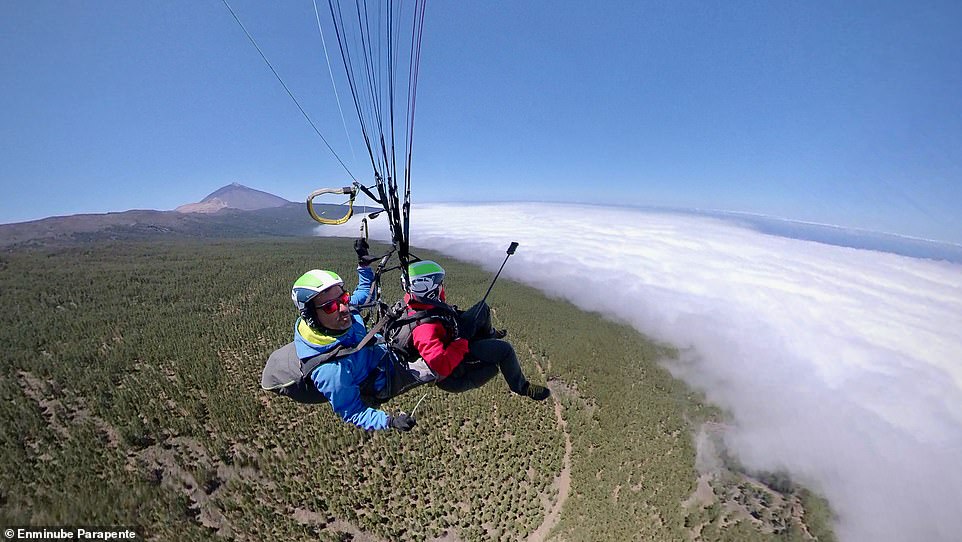 Roij Borja and Carlton Reid heading towards cloud cover after jumping. ‘I was running cartoon circles in the air as we shot skywards,’ Carlton reveals 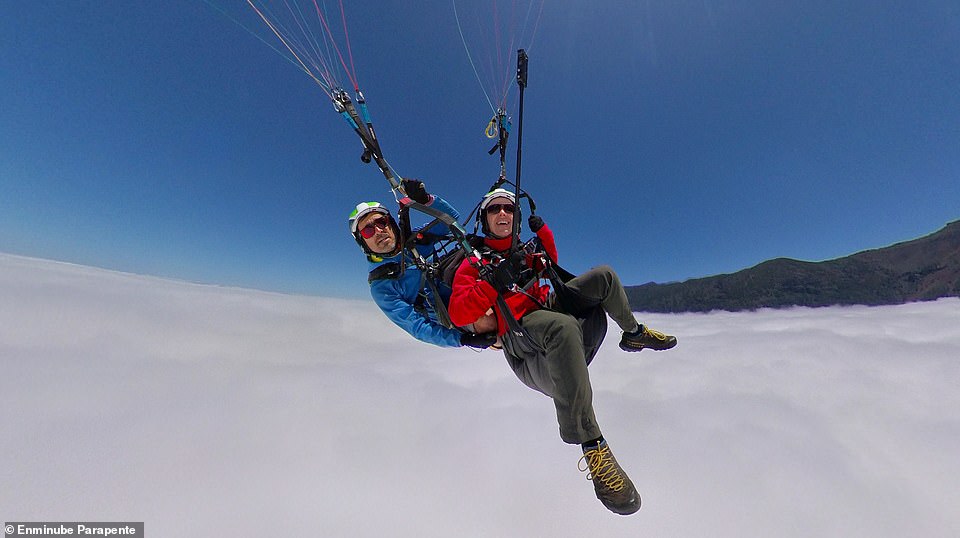 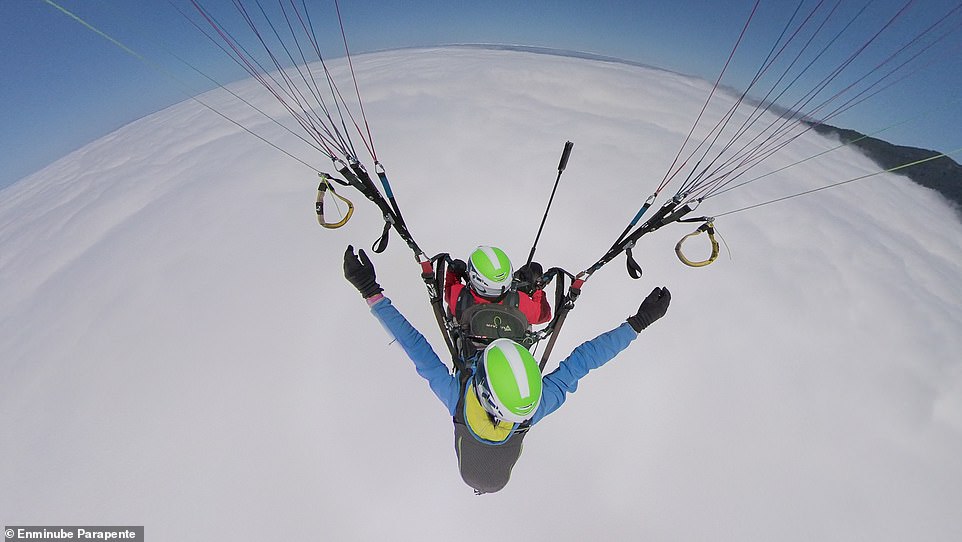 Roij Borja steers the tandem paragliding canopy into clouds. Carlton says: ‘The Atlantic — and the rest of the world — was obscured, meaning a flying-blind descent through cloud cover’

We climbed, overtaking cyclists making the same ascent through the clouds.

We passed clumpy forests of pine and juniper amongst the ancient lava fields. The undergrowth — mostly broom — faded the further we climbed, and then we breached the clouds, emerging into strong sunshine. We headed towards the shining white buildings and telescopes of Mount Teide’s astronomical observatory at Izana. (The night sky above the volcano is among the clearest in the world.)

We stopped at the Puerto de Izana viewpoint, a platform built as a viewpoint and a turning zone for the paragliding shuttles.

A dusty, lunar-like landscape was all around us, with the unmistakable summit of Mount Teide to one side and a white soup of clouds bubbling up from below. The Atlantic — and the rest of the world — was obscured, meaning a flying-blind descent through cloud cover. (Paragliders fly with GPS and altimeters, so the white-out wasn’t as risky as it felt.)

‘We headed towards the shining white buildings and telescopes of Mount Teide’s astronomical observatory at Izana (above),’ writes Carlton 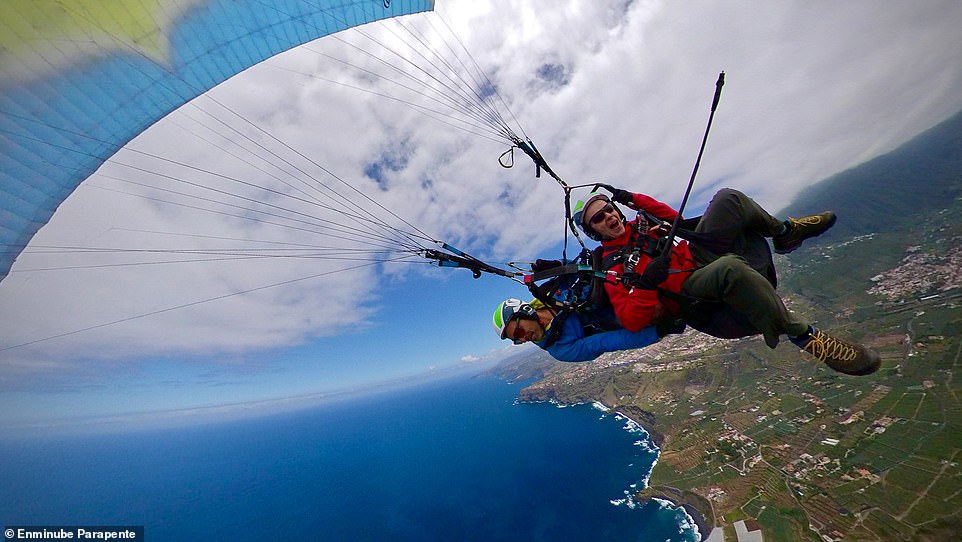 Above, Carlton and Roij do ‘stunts’ in the air. ‘He pulled hard on one of the steering handles to throw us into a steep, curving dive,’ writes Carlton

Our two pilots grabbed their 20kg (44lb) packs, and we followed them across to a makeshift and gentle take-off slope, battered white windsocks flapping in the breeze. This is one of the two official take-off zones in the Unesco World Heritage Site, a National Park since 1954.

Seconds before take-off, we blithely signed a disclaimer form, skim-reading the fact that the ‘practice of paragliding activities carries serious risks’. (Flyers do die, but the drive up the mountain was statistically more dangerous than throwing ourselves off it.)

Tenerife’s climate means it’s perfect for adrenalin sports such as paragliding. The largest of the Canary Islands is on the same latitude as the Sahara Desert and enjoys settled, clear conditions almost all year round. 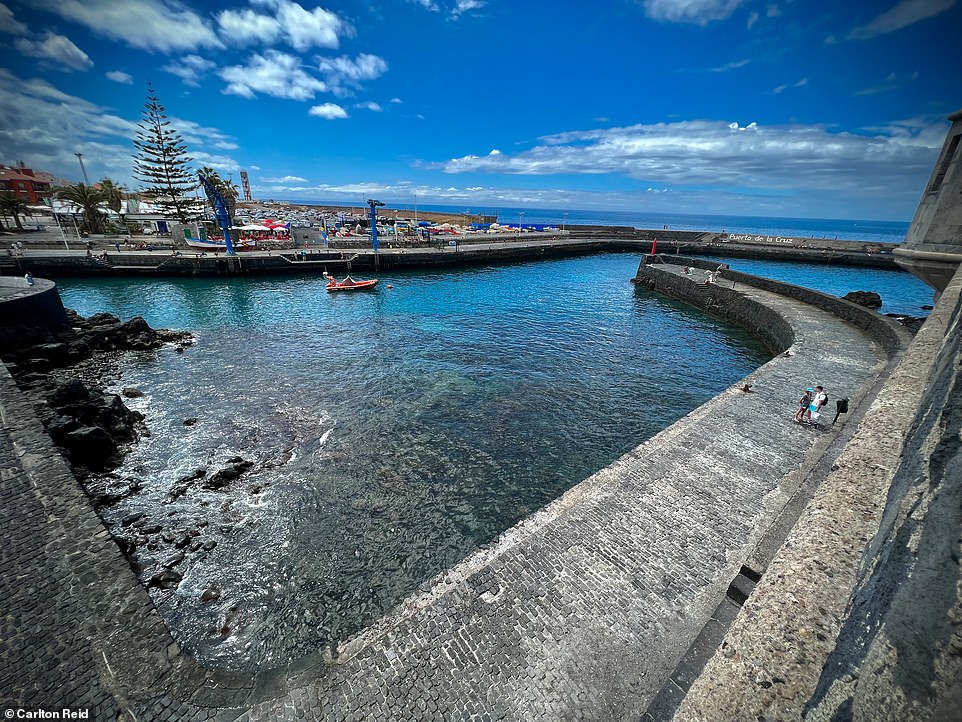 ‘We did loops of the coast and over the town of Puerto de la Cruz,’ Carlton reveals. Above is the town’s port

Not for nothing is Tenerife known as the ‘Island of Eternal Spring’, although in the 15th Century, because of its propensity to be consumed by molten lava, it was known as the Isla del Infierno: Hell’s Island. Mount Teide last erupted in 1909.

None of this is front of mind when you’re about to take off from dusty slopes, knowing you’ll soon be airborne over rocky terrain so barren and devoid of cushioning vegetation that Nasa came here to trial the Perseverance Rover buggy later used on Mars. 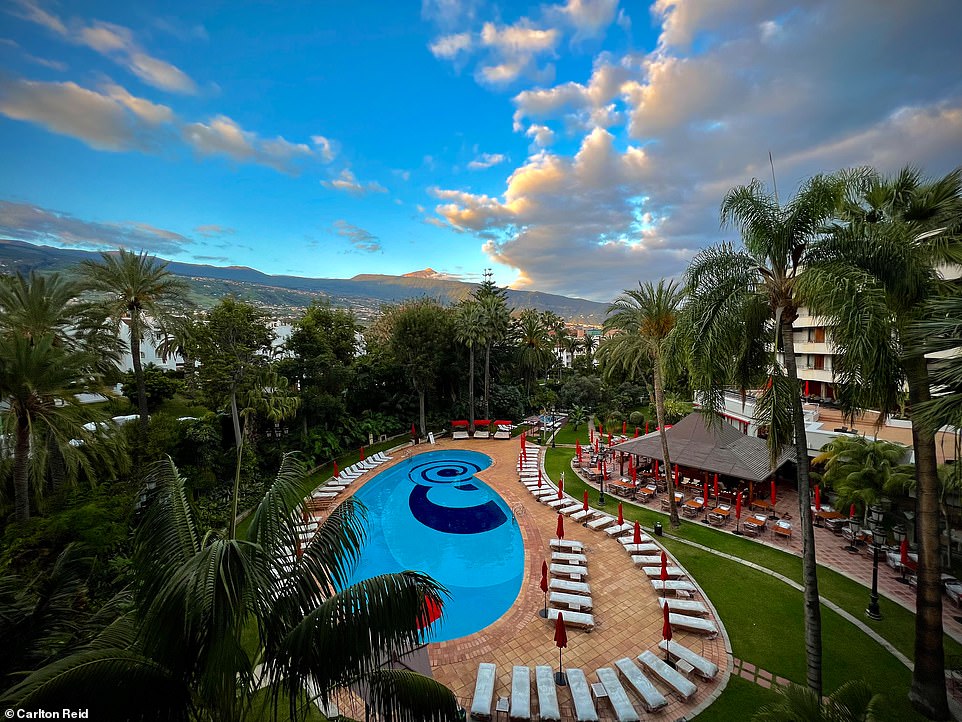 Carlton’s view of Mount Teide from the five-star Hotel Botanico, his base during the trip 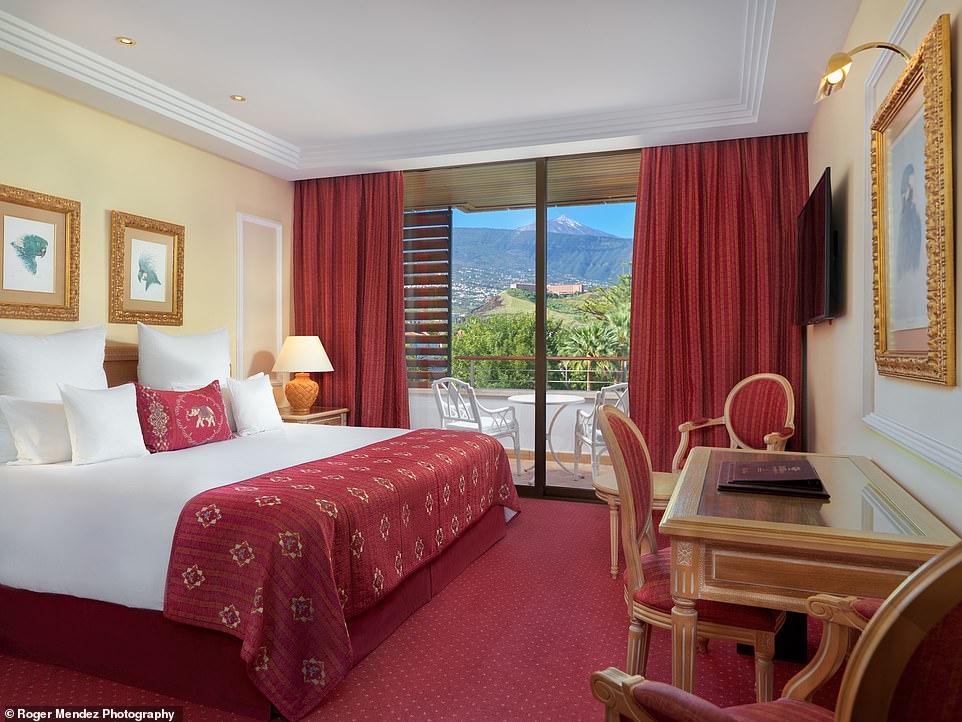 A double deluxe room with a Mount Teide view at Hotel Botanico. The volcano last erupted in 1909, Carlton reveals

A flight from the Izana viewpoint (2,200m/7,217ft) costs £119 (140 euros) per person and includes insurance, transport, and photographs of the experience. In fair weather, Enminube Parapente can operate three flights a day. ‘Four is too much for us – we must not be very tired,’ said company owner and chief pilot Roij Borja.

Flying from the La Corona take-off point above the hill town of Los Realejos costs £102 (120 euros) per person. This wide, blanket-covered take-off zone is 765m (2,509ft) above sea level and allows for a flight of between 15 and 30 minutes. For more information visit enminubeparapente.com.

Carlton stayed at the five-star Hotel Botanico. For more information, visit www.hotelbotanico.com. Rooms cost from around £180 per night.

As well as flying from the flanks of Mount Teide, he also joined a group of stargazers for Atardecer y Estrellas (dusk and stars), an evening tour of the heavens led by a very entertaining astronomy guide who picks out stars with a laser pointer.

Some passengers slump into the harness before lift-off, hampering the pilot. I did as I was told. And then I was running cartoon circles in the air as we shot skywards.

‘Now sit back,’ barked Borja, kicking my bum to force me back into the passenger seat. On the ground, I’d think the thump presumptuous; up here in the sky, I wasn’t so fussed. Borja was now God, my life in his hands. Literally. The handles above his head would steer us through the approaching white-out.

‘We won’t see a thing for two minutes,’ he warned.

Just before the clouds swallowed us, Borja extended the selfie-stick on his Insta360 camera and took photos of our flight. At a speed of 25kmph (15.5mph), we dropped into the gloop.

Borja told me about the GPS equipment and said he was following an app that knew where we were, when we had to turn and how far and fast we had to descend.

Gradually, the houses of the Orotava valley became clearer and clearer, and then we were out of the clouds, yet seemingly higher than ever.

Taking off beside Mount Teide had been a thrill; there had been little sensation of being at a great height because all that could be seen was a blanket of fluffy whiteness.

Now with the whole valley far, far below us, the flight felt more real, more vulnerable. I was still smiling.

As the crow flew the distance from Izana to the landing beach was about nine miles, but we did loops of the coast and over the town of Puerto de la Cruz.

We passed over the teardrop-shaped pool of the Botanico Hotel where I was staying and then steered out to sea again, boosted by thermals above sea cliffs and tall buildings.

I had already given Borja permission to pull some stunts. ‘We can do “acro” at the end of the flight,’ he had said on the drive up the mountain. ‘Maybe you get sick.’

He pulled hard on one of the steering handles to throw us into a steep, curving dive.

The video shows my shock at the g-forces we pulled. Now lower, we skimmed hotel rooftops pretending to reach out to surprised sunbathers.

‘We will land on the beach – there aren’t many people on it,’ said Borja. ‘When we land, keep running,’ he added. As we hit the black sand, I faltered only slightly, staying upright as we hopped to a halt and the canopy and guidelines flopped to one side, covering the mum and her delighted child.

We had been in the air for 45 minutes. As Borja had predicted, I felt slightly seasick, but I still had a massive grin on my face. What fun!