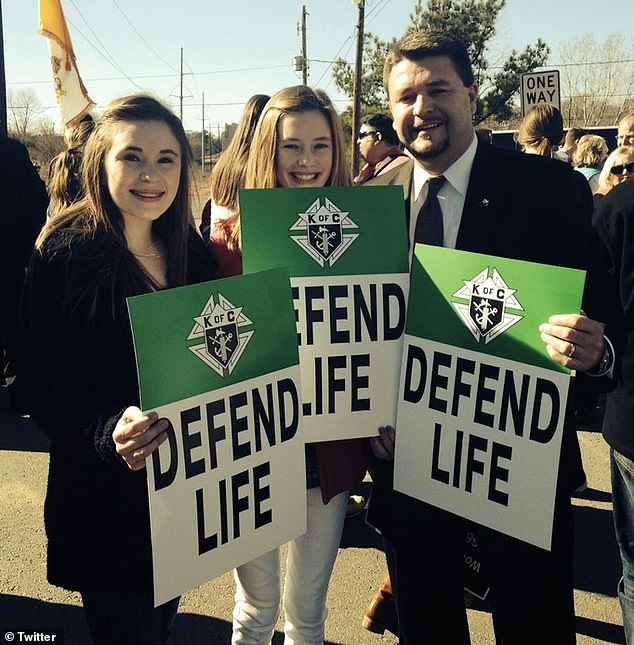 Arkansas will likely be the next state to ban abortion for women who are more than six weeks pregnant.

Last week, State Sen. Jason Rapert announced on Twitter that he would introduce the Arkansas Heartbeat Protection Act during a special legislative session on October 25.

The bill, he said, will include a ‘civil cause of action – just like Texas’s,’ which includes financial incentives for citizens to seek out and sue anyone who ‘aid or abets’ anyone trying to get an abortion.

If they successfully sue, they could receive at least $10,000 and have their legal fees covered by the opposing side.

Rapert has called the bill ‘absolutely awesome’ in an interview with KNWA, and tweeted on Monday: ‘It should be easy to pass the Texas-style heartbeat bill in our upcoming special session.’ 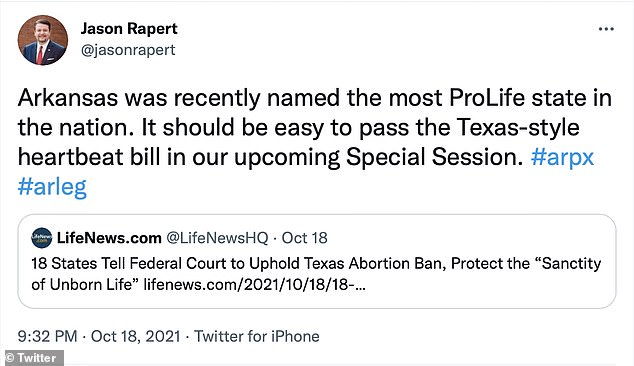 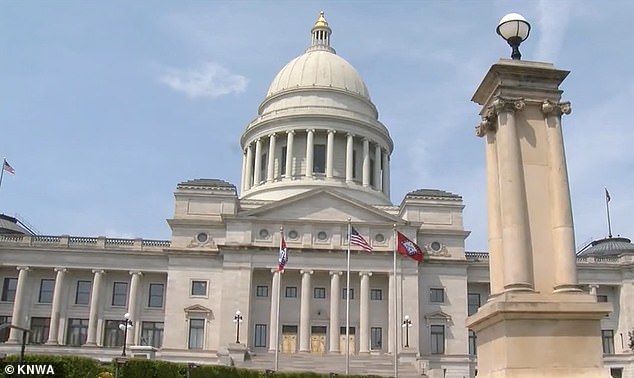 The Arkansas State Legislature has previously passed a number of measures limiting abortion access, and in 2020, the state was named the ‘most pro-life state in America’

Rapert has previously introduced other measures to limit abortion access, including a near-total abortion ban that the Arkansas State Legislature passed earlier this year. 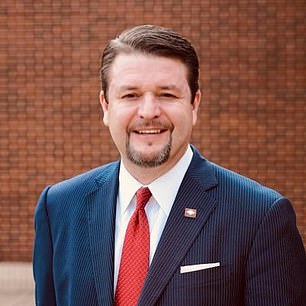 Rapert has previously introduced a number of anti-abortion bills, including a near total ban on abortions that was struck down by a judge earlier this year

The state also passed a trigger law in 2019, which Rapert also sponsored, that would immediately ban abortion if Roe v. Wade is ever overturned.

Arkansas was named the ‘most pro-life state in America’ by Americans United for Life, a national anti-abortion group, in 2020.

The organization ranked each state based on ‘state laws protecting the unborn, the elderly, the disabled, and the terminally ill,’ KNWA reported at the time.

And if Rapert had his way, he told the Southwest Times Record earlier this month, ‘I’d go board-up the abortion clinics in west Little Rock this weekend and be done with it because that’s what the people of Arkansas want.

‘But I’m working within the system, and we respect the fact that we passed laws, they got struck down, we came at it again.’

He said his proposed heartbeat bill is needed ‘because federal judges are trying to strike down our laws time and time again.’

He noted: ‘We need to do this before our regular session ends in September.’ 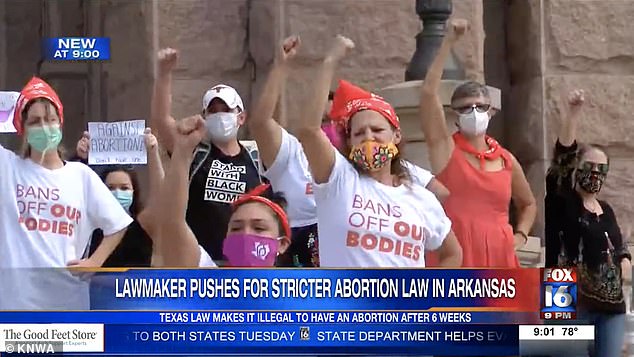 Abortion rights activists are pushing back against the measure, as they say they are preparing ‘for the worst’

But not everyone supports the heartbeat bill.

Still, abortion rights activists say they are preparing for the worst.

‘We are taking this very, very seriously,’ Emily Wales, CEO of Planned Parenthood Great Plains told the Huffington Post. ‘We know that we have a number of legislators here in Arkansas who are eager to be on the frontlines of ending abortion access entirely – no matter the impact on the citizens they serve.

‘The overwhelming majority of Arkansans would lose access to care’ under the bill, she added, saying: ‘The reality of what this means for the region is very, very real and present.’

Wales noted that Planned Parenthood Great Plains also oversees Nebraska and Oklahoma, which she said, is seeing ‘lots of patients in crisis who are crossing state lines from Texas.’

And Rapert’s bill, she said, ‘would only increase that crisis to Arkansans who would then be forced to travel, if they can afford to, to states even farther out- potentially overwhelming the neighboring states that are trying to support Texas.’ 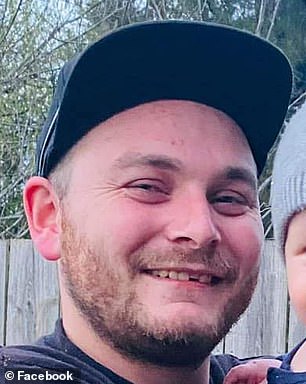 Advertisement Search crews continue to scour the coast for missing boatie after two bodies wash ashore Isaiah Dixon, Thomas Courto and Bree-Anna Thomas were reported missing  The trio left from Wynyard on a 17-foot motorboat on Monday at about 12pm  Following extensive searches two bodies were found on Wednesday afternoon  By Charlie Coe For Daily… 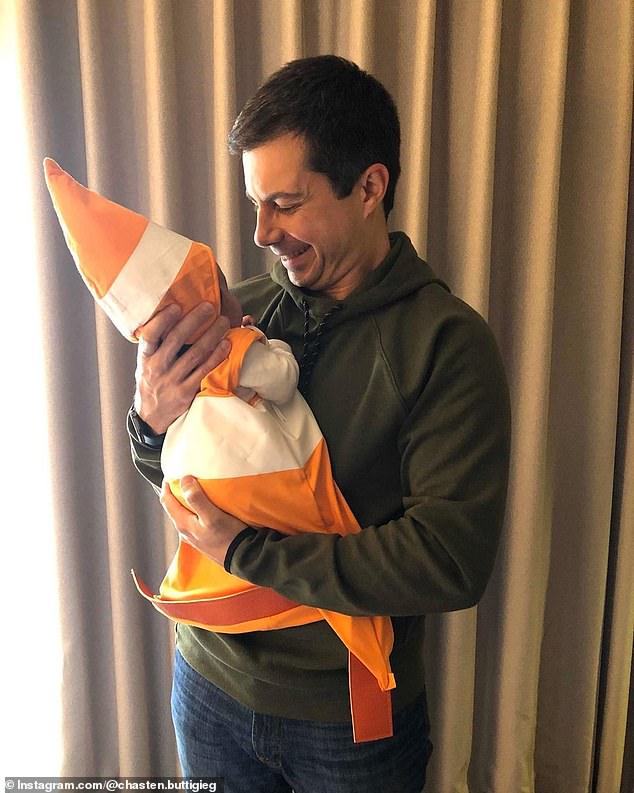 Advertisement Transportation Secretary Pete Buttigieg dressed his twins as traffic cones to match their outfits with his talking points on infrastructure, as he and his family celebrated Halloween in the hospital with their ailing infant son.   ‘It is Halloween. Do the twins have a costume or costumes?’ CNN anchor Dana Bash asked him on Sunday…. 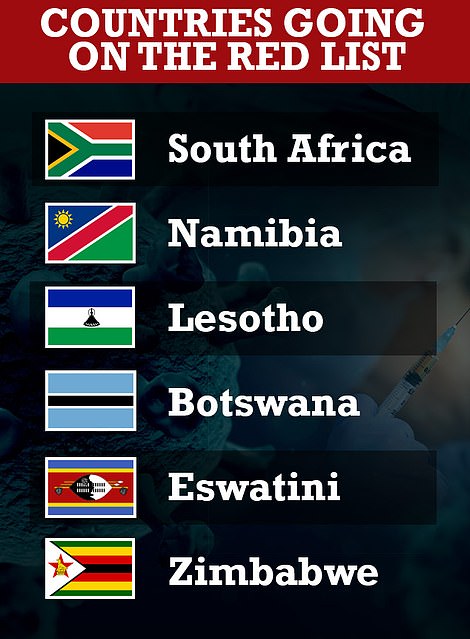 Advertisement Sajid Javid today warned the new super-mutant, vaccine-evading Botswana Covid strain has shown the pandemic is ‘far from over’ after experts warned the variant may have already arrived in the UK prompting fears it could cause another Christmas lockdown. Scientists insisted people must be braced for a ‘change in restrictions’ amid growing alarm at… 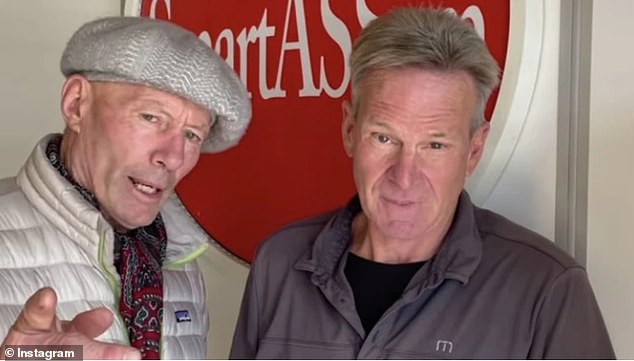 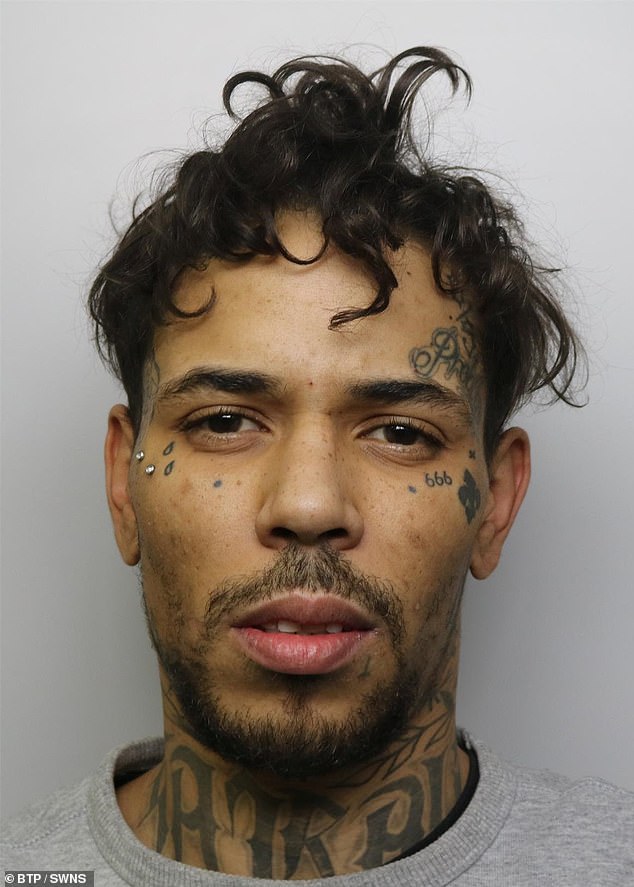