Think of a string of idyllic islands scattered like pearls across the glittering Indian Ocean and you’ll almost certainly imagine the Maldives. But head closer to the eastern coast of Africa and the Seychelles archipelago has the same soft sandy beaches, kaleidoscopic sea life and blindingly blue ocean, yet with attractions and amenities that won’t leave you feeling like a stranded Robinson Crusoe.

It’s no wonder that the country – made up of 115 islands – is a magnet for high-profile honeymooners such as actress Salma Hayek and her billionaire husband Francois-Henri Pinault, George and Amal Clooney and the new Prince and Princess of Wales.

‘Visitors come here who’ve also been to the Maldives and say that it’s beautiful there but after three days they’re bored,’ says Nils Roberts, a tour guide on the Seychelles’ largest island, Mahe (cocotiertours.com). ‘In Mahe you can tour the capital, Victoria, or hike or visit heritage sites and museums. You can even do trips to other islands. You don’t have to sit on the beach all day – although you can if you want to.’

Dream destination: Siobhan Grogan explores the ‘idyllic’ islands of the Seychelles archipelago. The palm-tree-fringed sands of Anse Source d’Argent (pictured) on the isle of La Digue are often named the most beautiful in the world, she reveals 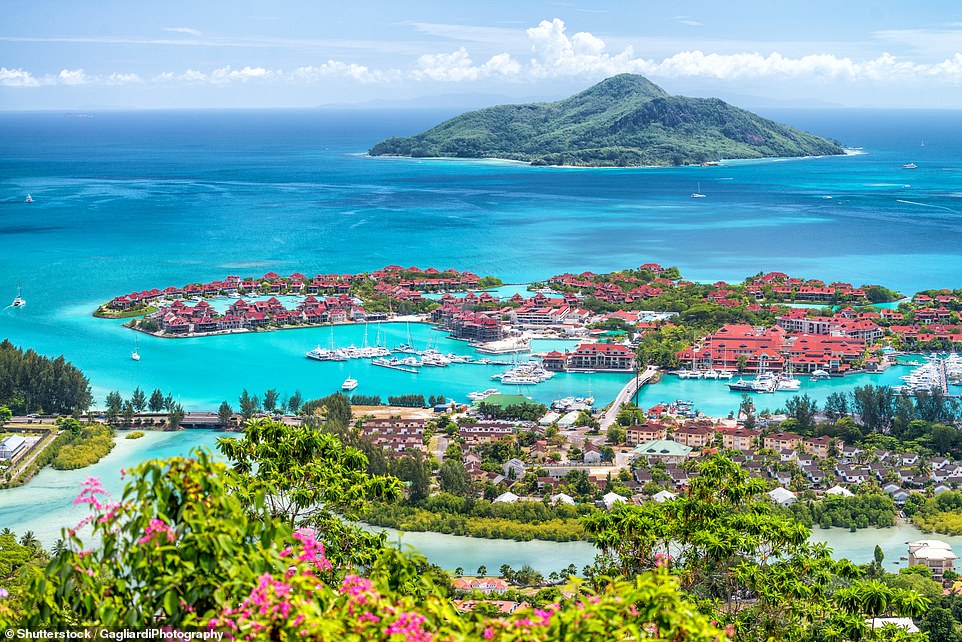 ‘In Mahe (pictured) you can tour the capital, Victoria, or hike or visit heritage sites and museums,’ a tour guide tells Siobhan

In the Maldives, each island tends to belong to a resort, so to visit another usually means having to check in. In contrast, the main islands in the Seychelles are connected by a reliable ferry service, so you can either zip about between them yourself or join organised tours.

Among the largest, the almost car-free La Digue has beaches straight out of a daydream – the palm tree-fringed sands of Anse Source d’Argent are often named the most beautiful in the world.

Volcanic Silhouette is ringed by a protected marine reserve for swims alongside lionfish, turtles and whitetip sharks, while the second-largest island, Praslin, is the place for stunning sunsets. It’s also home to the Unesco-listed Vallee de Mai, a prehistoric forest which was presumed to be the Garden of Eden by British General Charles Gordon when he visited in 1881.

It’s one of only two places in the world where the endangered coco de mer grows naturally – an enormous double coconut that can weigh more than 40 lb (20kg) and is the world’s heaviest seed. 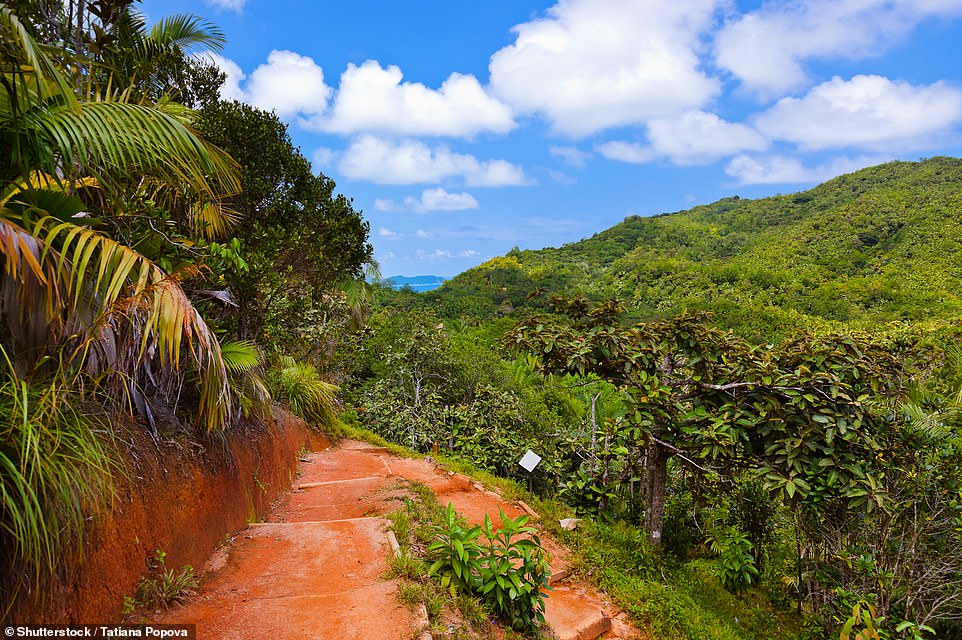 The island of Praslin is home to the Unesco-listed Vallee de Mai (pictured), a prehistoric forest that was presumed to be the Garden of Eden by British General Charles Gordon when he visited in 1881

However, to really experience the Seychelles beyond the beaches, you’ll need to base yourself on Mahe. Home to 90 per cent of the archipelago’s population and its international airport, a vibrant Creole culture reveals historic ties to Africa, India, Portugal, France and Britain. Uninhabited until the 18th Century, the first to roam Mahe’s shores were pirates – it is rumoured that one of them, Frenchman Olivier Levasseur, left behind buried treasure worth some £100 million.

The French soon claimed the archipelago as their own, naming it after Louis XV’s finance minister, Jean Moreau de Sechelles, and brought in slaves from Africa and India. It was handed over to Britain in 1814 following the Napoleonic Wars and remained a colony until 1976, when it became the independent Republic of Seychelles.

Now Mahe is the country’s largest and most developed island, although only 17 miles long. It is also the best place to stay if you’re not working with a billionaire’s honeymoon-sized budget – reasonably priced accommodation includes Blue Hill B&B in Victoria costing about £115 per double room per night (bluehill.sc), and Panorama Guesthouse, close to the popular Beau Vallon Beach, at about £90 per double room per night (panorama-seychelles.com).

Beau Vallon is also the best place for cheap eating, with a handful of ocean-front cafes, beach shacks and stalls selling fish hauled straight from the sea just feet away. Octopus is a staple, caught by local fishermen who wade into the water at low tide with a sharpened stick and length of twine. 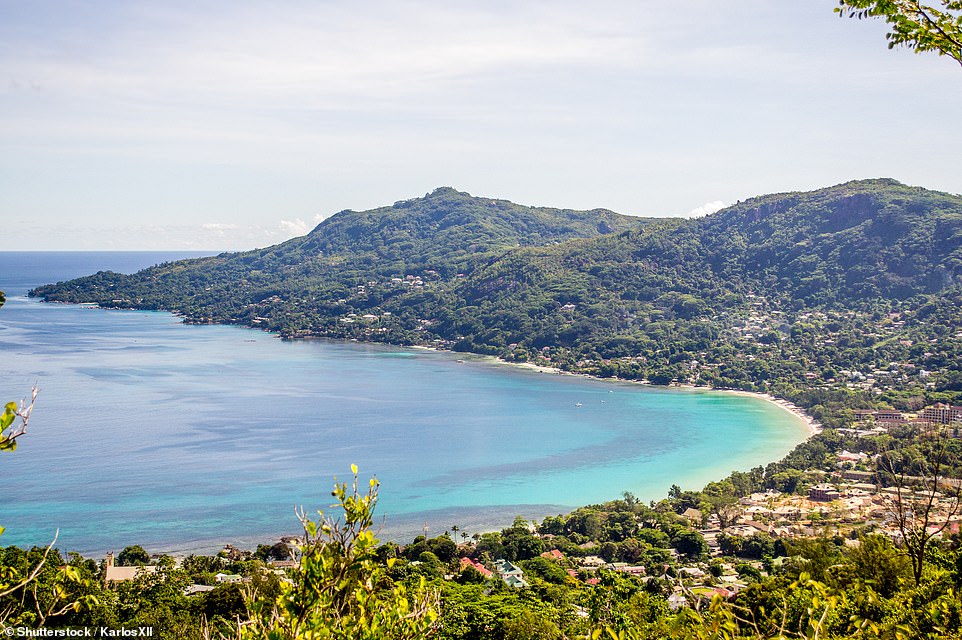 According to Siobhan, Beau Vallon bay, pictured above, is the ‘best place’ for cheap eating

Try it cooked with coconut and cinnamon in creamy curry served from vats at the night market every Wednesday. Afterwards, browse the craft stalls or grab a SeyBrew beer and watch live Moutya music played on goatskin drums around campfires.

For serious indulgence, stay close by at the adults-only five-star Hilton Seychelles Northolme Resort & Spa, with a view so good it inspired James Bond author Ian Fleming when he was struggling to write For Your Eyes Only.

Here villas on stilts, many with expansive private pools, are dotted across a forested hillside that tumbles straight on to a private beach, traditional Creole dishes have a fine-dining twist, and the Seychelles’ only gin bar serves up cocktails with uninterrupted sunset views over the ocean. 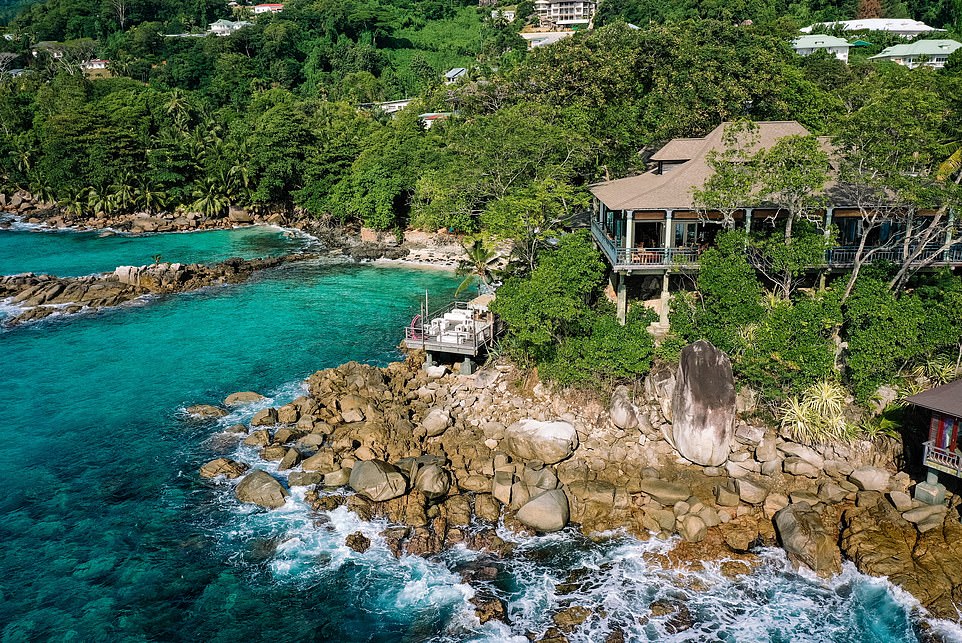 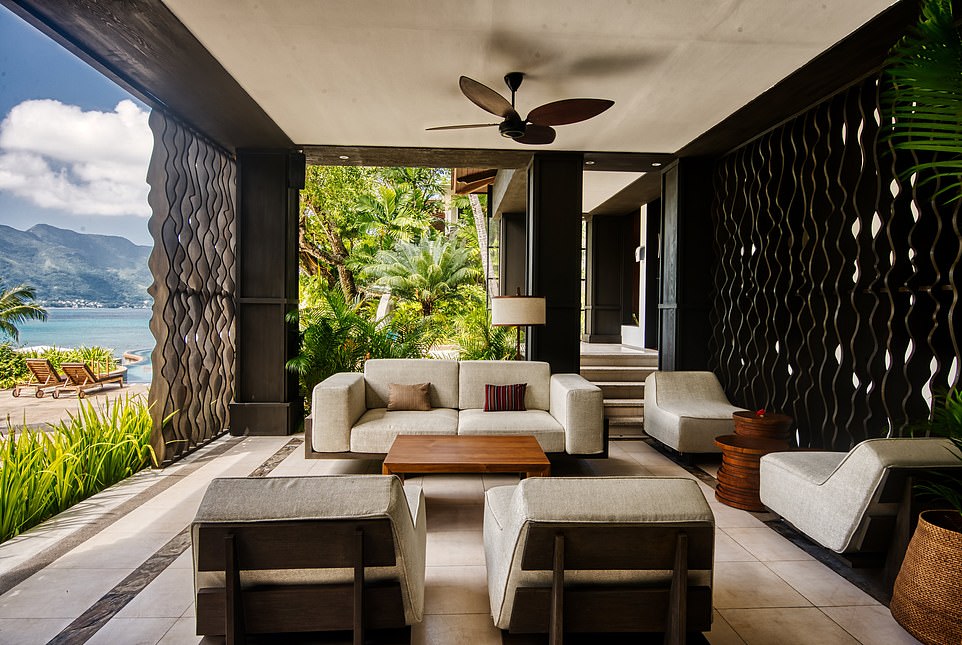 Villas on stilts, many with expansive private pools, are dotted across a forested hillside that tumbles straight on to a private beach at the Hilton Seychelles Northolme Resort & Spa 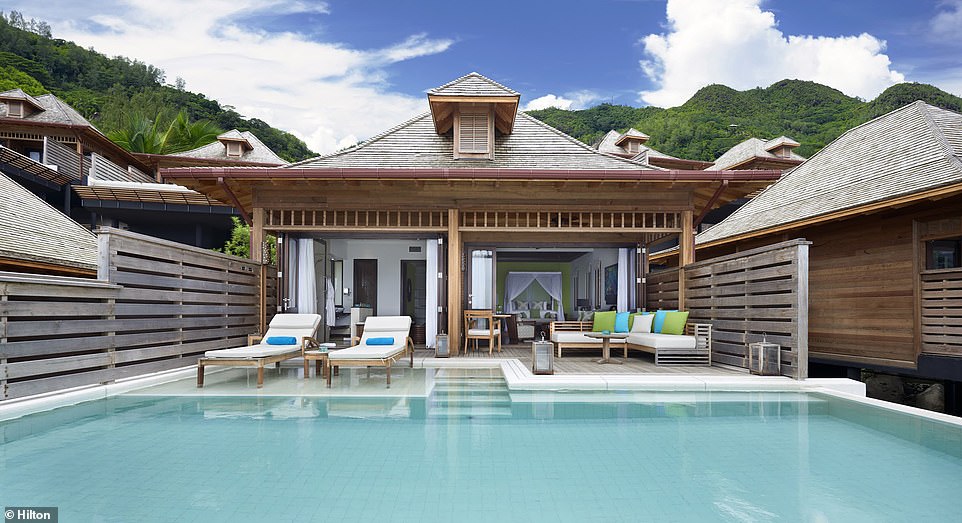 A pool at the Hilton Seychelles Northolme Resort & Spa. ‘The resort is ideally placed to explore the island away from the water, and operates a free shuttle service to Victoria,’ says Siobhan

HOW MUCH? IT CAN BE CHEAPER THAN CENTER PARCS!

If you have a celebration-sized budget, you won’t struggle to splash the cash in the Seychelles.

But if you can resist the five-star resorts, you’ll find the Indian Ocean archipelago can be better value than you might have expected. Research by the Seychelles Tourism Board found that a holiday in the island paradise costs less than a UK staycation in Center Parcs. A week in a four-bed Exclusive lodge in Center Parcs Elveden Forest in Suffolk costs up to £7,198, while the average price for a family of four spending seven nights in the Seychelles, including flights and hotel, is £5,900.

Karen Confait, marketing director at Tourism Seychelles, says: ‘Across the 115 islands, there are many small hotels and guest houses for a price that will leave you enough to enjoy diving, sailing, hiking, cycling and island-hopping. And keep costs down by using buses, visiting markets and street food stalls to eat – and using all the beaches that are free, which is most of them.’

The resort is also leading the way on Mahe when it comes to protecting the Seychelles’ future, aware that by 2050 it’s estimated that 90 per cent of the world’s coral will be dead. To do its bit to preserve paradise, it created the island’s first artificial reef and now runs a coral-restoration programme alongside the Marine Conservation Society.

Guests can join guided snorkelling trips to the underwater nurseries where ideal growing conditions help young coral flourish, or even adopt a coral to track its growth after they return home, with pictures and a GPS location provided once the coral is replanted in the ocean. Hundreds have been adopted so far and the work is now part of a nationwide move to safeguard the Seychelles’ future and its maritime economy.

The resort is also ideally placed to explore the island away from the water, and operates a free shuttle service to Victoria, one of the world’s smallest capital cities.

Named after Britain’s former Queen, Victoria is a startling contrast to Mahe’s tranquil, wave-lapped sands. There are traffic jams and blaring horns while the extravagant, pastel-coloured Sri Navasakthi Vinayagar Hindu temple looms above it all. A miniature replica of the clock tower on London’s Vauxhall Bridge Road marks one busy crossroads, which was brought to the island in 1903 to commemorate Victoria’s life.

Inside the central Sir Selwyn Selwyn-Clarke Market, stallholders yell Creole over bags of cassava chips, sweet red bananas and trays of glossy red snapper and stingray. This is also the best place to pick up souvenirs, including skin-softening coconut oil, bundles of cinnamon sticks and jars of papaya jam. 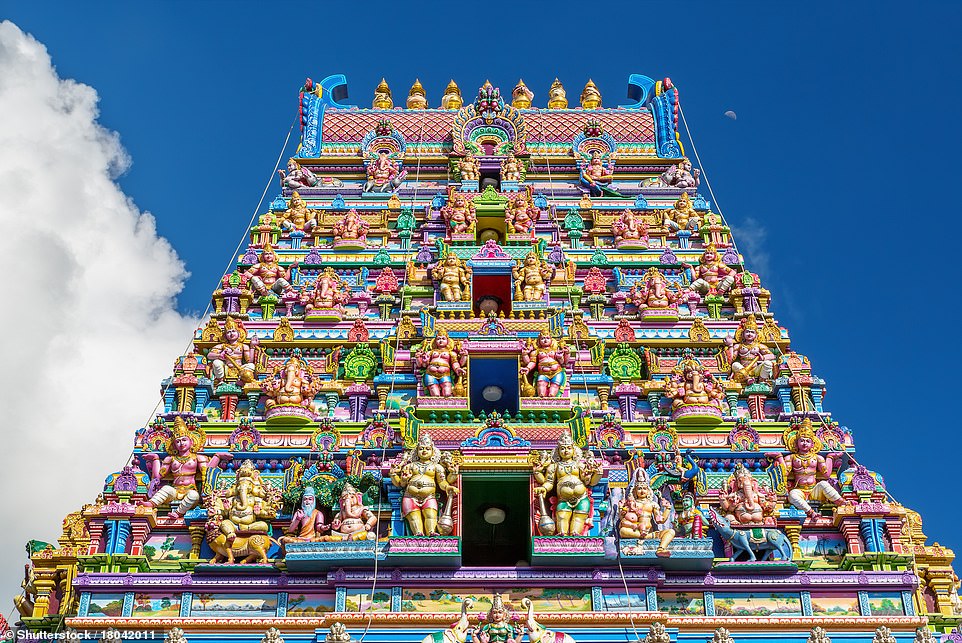 Above is the ‘extravagant, pastel-coloured’ Sri Navasakthi Vinayagar Hindu temple that ‘looms over’ Victoria 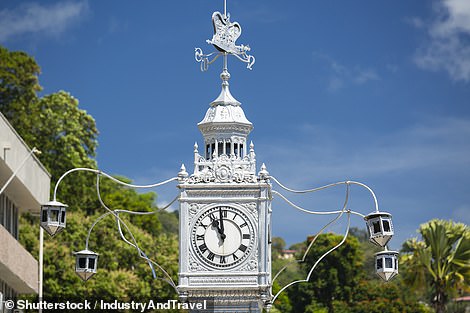 For one of the best views on the island, head to the Mission Ruins of Venn’s Town, almost hidden by thick jungle at the top of a mountain in the Morne Seychellois National Park. The crumbling walls are all that remain of a 19th Century school established by the burgeoning Anglican church to educate children of freed slaves.

Many of those brought here had been rescued by the Royal Navy from ships carrying illegally traded slaves after the practice was abolished in the British colonies in 1834. It was these families and their descendants who would go on to establish the Creole culture of the Seychelles today.

This is a great place if you want to get some exercise. The National Park covers 20 per cent of the island and is criss-crossed by hiking trails and paths which weave through dense rainforest, past giant granite boulders and over cloud-grazing peaks, and where you may not meet another walker for hours. 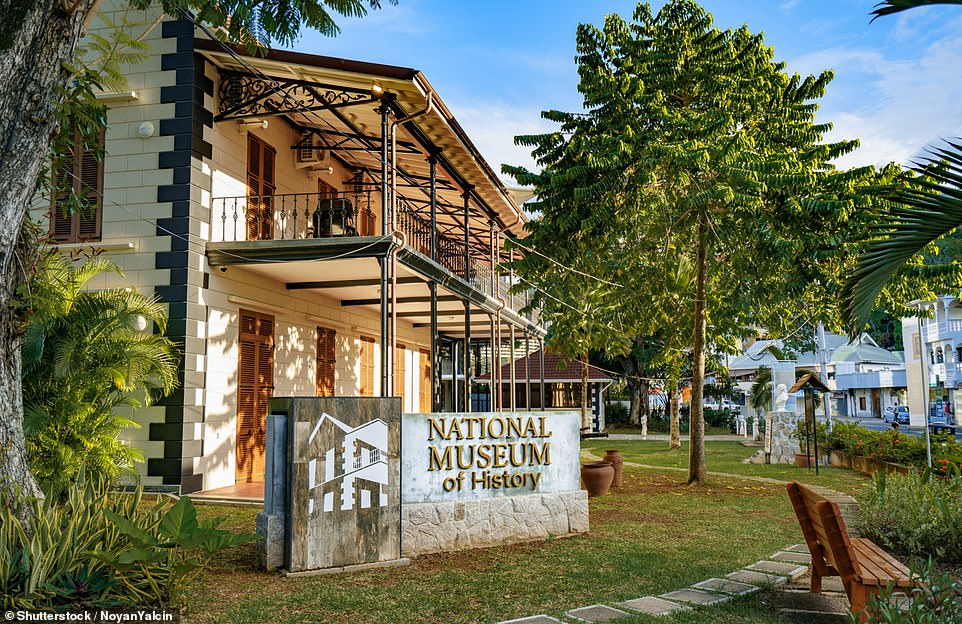 Above is Victoria’s ‘excellent’ National History Museum, where displays tell the story of the Seychelles’ 300-year history

However, you won’t be completely alone, as this is the best place to spot some of the Seychelles’ unique wildlife, including the Sooglossus, one of the world’s tiniest frogs. Also worth watching out for, sitting in webs shimmering in the sunlight, are palm spiders – they’re about the size of a hand – and, when evening falls, huge fruit bats swoop in to feast on mangos.

A guide can help point out the astounding array of flora and fauna along the way, including trees growing cotton, pineapples and cashew nuts.

For spectacular bird’s-eye coastal views, the steep Morne Blanc trail scales one of the island’s highest mountains, but it is an experience best left to serious hikers. 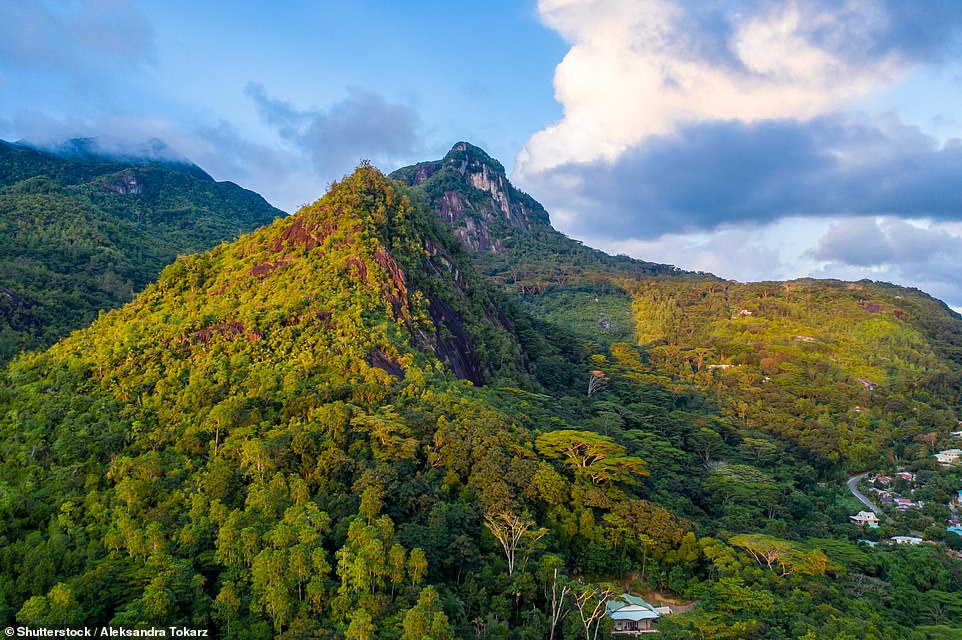 Morne Seychellois National Park, pictured, covers 20 per cent of Mahe and is criss-crossed by hiking trails and paths that weave through dense rainforest 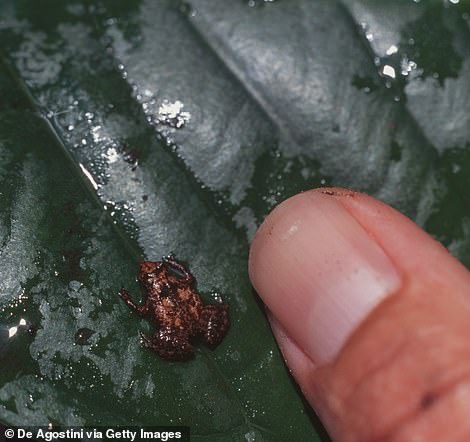 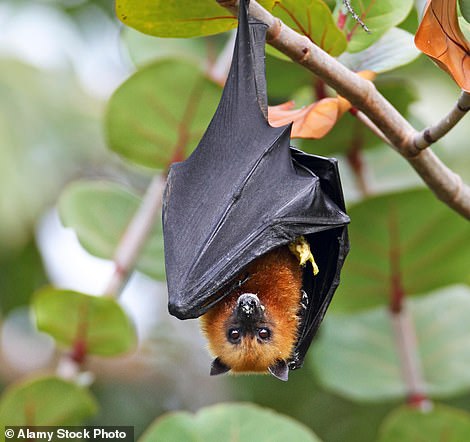 Morne Seychellois National Park is the best place to spot some of the Seychelles’ unique wildlife, including the Sooglossus (left), one of the world’s tiniest frogs. When evening falls in the national park, huge fruit bats (right) swoop in to feast on mangos 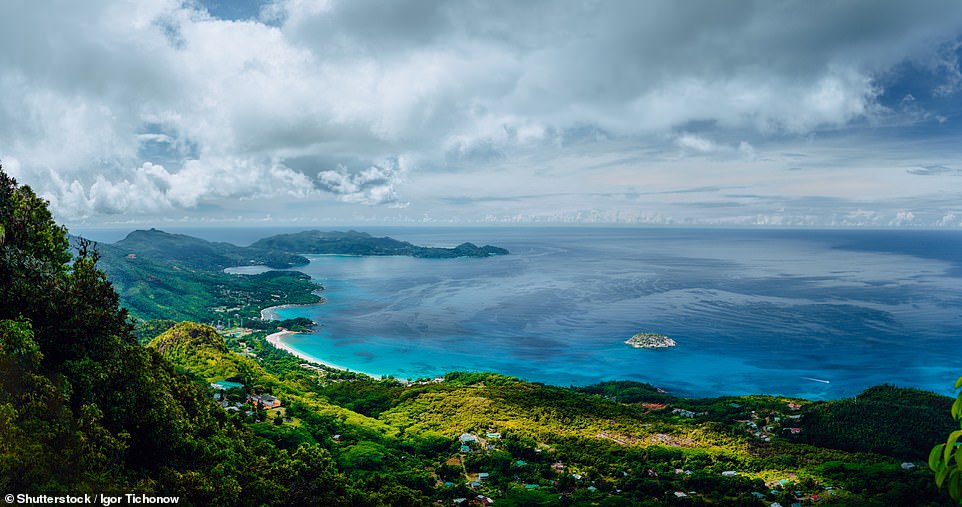 Above is the ‘spectacular’ coastal view from the top of the steep Morne Blanc trail, which scales one of Mahe’s highest mountains

Instead, follow the Anse Major trail along a rocky cliff edge, between granite monoliths and through a cave buried under tangled tree roots in the rainforest.

At the trail’s end, scramble through the undergrowth to cool off in the clear water of Anse Major beach, a deserted curve of bone-white sand that can be reached only on foot or by boat.

Just one more reason why it would be a mistake to leave this unspoilt island paradise to the newlyweds.

Siobhan Grogan was a guest of Hilton Seychelles Northolme Resort & Spa, where B&B is from £404 per night for a Sunset Villa (seychelles.hilton.com). Emirates (emirates.com) flies to the Seychelles from Gatwick via Dubai from £729 return. For more information, visit the Seychelles Tourism Board at seychelles.com.