Multiple weather systems are set to combine to bring an exceptionally chilly and damp start to winter for much of Australia.

A ‘polar surge’ is forecast to sweep up over the south of the country from Antarctica and will eventually reach as high as Queensland, bringing icy temperatures, winds and snow as low as 1000m above sea level.

The wet weather is also not forecast to ease, with La Nina predicted to last well into winter.

A similar system off Australia’s west coast, the Indian Ocean Dipole, is also causing problems in WA and will contribute to the increased rainfall.

Weatherzone meteorologist Joel Pippard said the freezing blast of Antarctic air will at first hit lower Western Australia before moving east to Adelaide, Melbourne and Sydney and then north over the country. 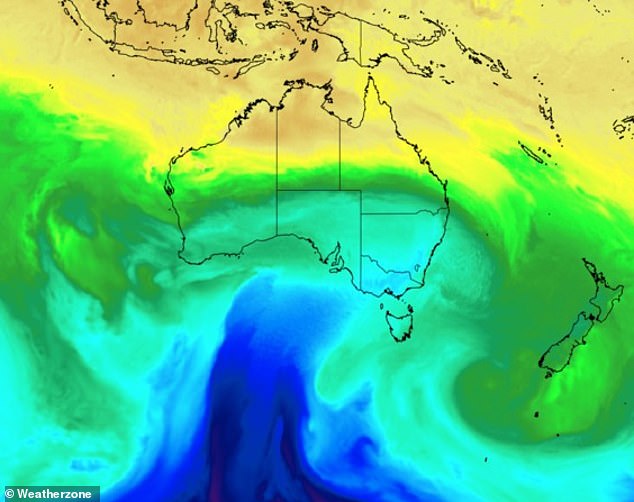 ‘Once it nears Australia on Saturday, this set-up of cold air hitting moisture can be very conducive to heavy, low-level snowfalls,’ Mr Pippard said.

He said a moisture-laden sub-tropical low off Western Australia and a Tasman low off the east coast will combine with the cold air.

‘There are three systems in total that need to line up so the specifics (of rain and snowfall cover) will vary in the next few days,’ he said.

Sydney is expected to see temperatures hovering between the low teens and low 20s for the week with rain on the weekend as the blast of cold air hits.

Slightly cooler conditions are forecast for Melbourne, with highs around 17C, while Adelaide will see similar temperatures but rain most of this week.

Research shows the La Nina system, which began 18 months ago and has battered Australia with record rainfall and floods, has an above average chance of sticking around into September.

Columbia University’s International Research Institute for Climate and Society and the US Climate Prediction Centre said there was a 63 per cent likelihood of La Nina throughout winter and a 58 per cent chance of the system continuing into spring. 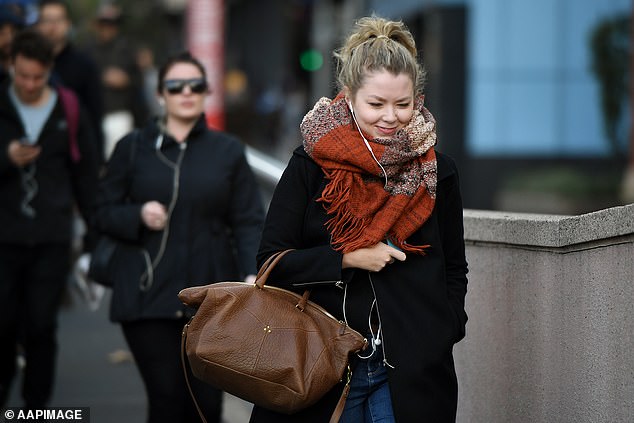 Sydney and Melbourne residents will need to rug up with a winter blast to hit later this week and the La Nina rain could stick around until September (pictured: a Sydneysider braves the cold) 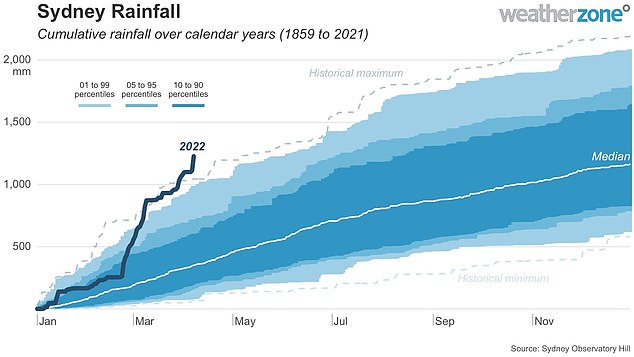 April ended up being another wet month in Sydney with 267.2 mm in the gauge, while May has also been relatively soggy, with 147.8 mm up until 9 am this morning, spread across 13 rain days

The Bureau of Meteorology agrees with the US research in their latest climate driver update issued on Tuesday which also forecasts La Nina will remain until well into winter.

‘Indicators of La Nina, including tropical Pacific sea surface temperatures and equatorial cloudiness, have seen little change for past fortnight,’ the bureau said.

The west coast, which has been largely unaffected by La Nina as yet, is forecast to also experience a wet winter thanks to a different weather system.

‘The Indian Ocean Dipole is currently neutral. However, the IOD index has become more negative over the past fortnight,’ BOM said.

The Bureau said all the climate outlook models form a consensus that a negative pattern in this system would develop in winter.

‘A negative IOD increases the chances of above average winter–spring rainfall for much of Australia.’ 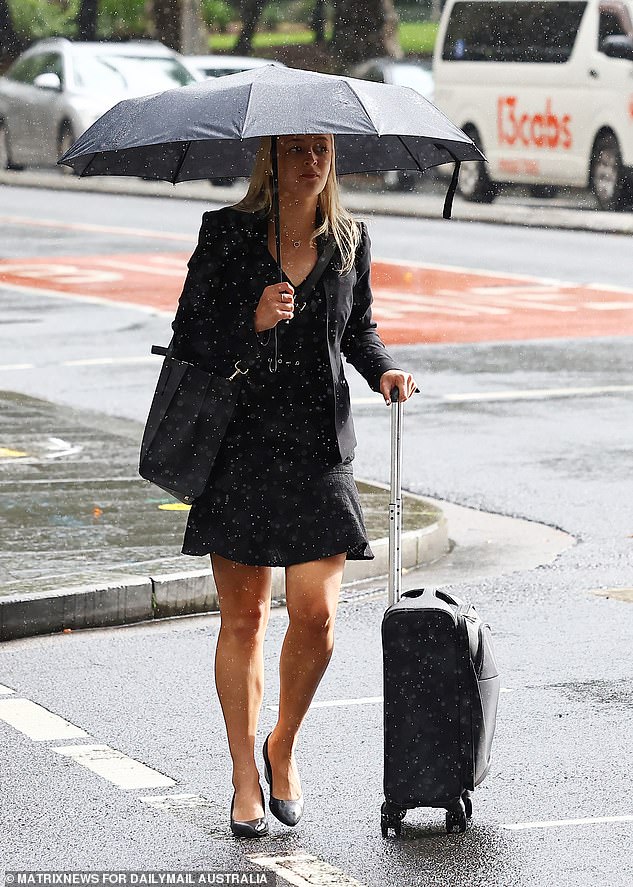 More rain is likely on the way after one of the wettest years on record for Sydney (picture: Sydney in February) 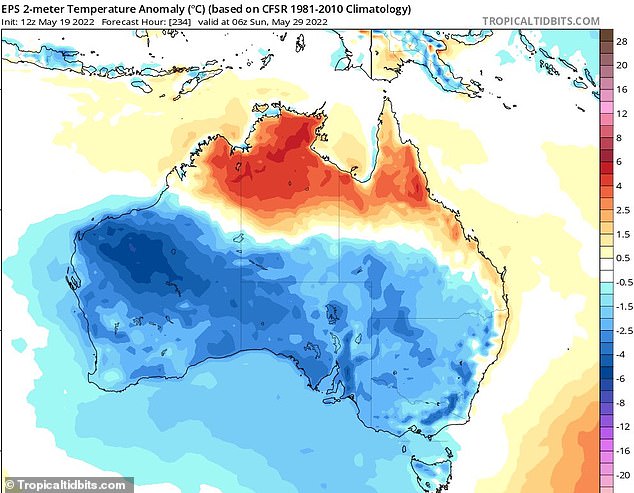 From Tuesday, increased rain and gale force winds are expected for southern WA and then across to the Victorian coastline and ranges.

The exceptionally chilly weather appears to have already reached Tasmania, with the state hitting its third lowest Autumn temperature on record.

The town of Liawenee, on Tasmania’s Great Lake, reached -9.9C at 7.20am on Tuesday, which is also the lowest temperature in the state since 2010.

The official ski season starts on June 12 but resorts such as Perisher and Thredbo in the Australian alps are already recording good snow temperatures.

Thredbo reached a low of -4C on Wednesday and will hit a high of 7C while Mt Hotham in Victoria had temperatures between 2C and 6C.

Perisher could see up to 40cm of fresh powder in the next 10 days while Mt Hotham and Falls Creek could reach 50cm. 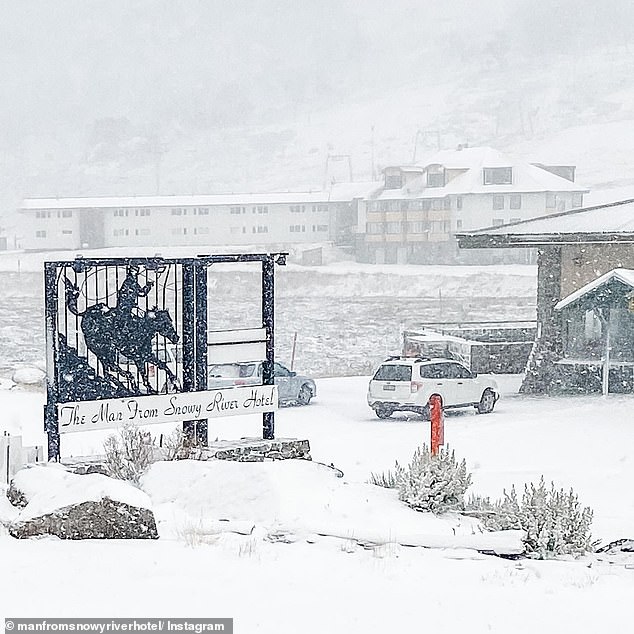 THE WEATHER IN YOUR CITY