A version of Omicron that is harder to track is rising quickly in England and is now more common than Delta.

Just a few hundred cases of BA.2 have been detected in the country so far, but the number of people testing positive for the subvariant has quadrupled in the last week.

Data from the UK’s largest Covid surveillance lab shows BA.2 was behind 0.8 per cent of all positive samples in the seven days to January 15 — up from 0.2 per cent the week prior.

It suggests around one in 125 people who tested positive for Covid in this period had the new subvariant.

The once dominant Delta mutant strain, for comparison, made up just 0.5 per cent of cases last week.

Delta was almost entirely pushed out following the arrival of the ultra-virulent original Omicron variant in late November, which now accounts for the vast majority of domestic cases.

Scientists believe BA.2 may have evolved to be slightly more transmissible than Omicron and could slowly become the UK’s dominant Covid virus.

There are already signs BA.2 outstripping its ancestor strain in Denmark, where it now makes up 45 per cent of all cases.

The Scandinavian nation’s daily cases have nearly doubled in a fortnight, despite having similar restrictions to the UK and being hit by Omicron at roughly the same time.

BA.2’s rise in England comes as infections start to creep back up after falling for two weeks straight, with 88,447 new cases yesterday.

But Dr Tom Peacock, a virologist at Imperial College London, said BA.2 is unlikely to be more severe. He insists it won’t have a ‘substantial impact’ on the UK’s current situation. 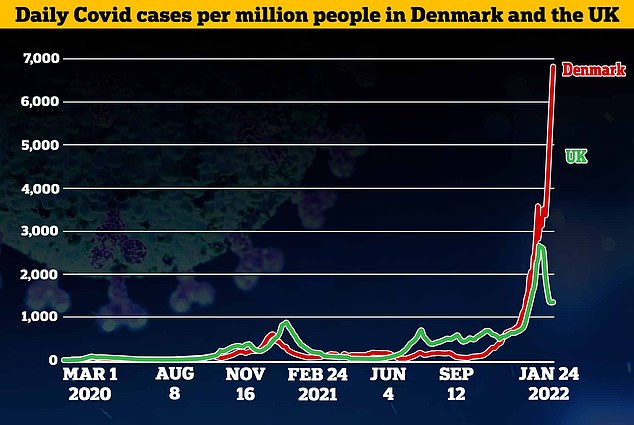 The above graph shows daily Covid cases per million people in Denmark (red) and the UK (green). It reveals Denmark, where BA.2 is dominant, has seen a much bigger spike in cases 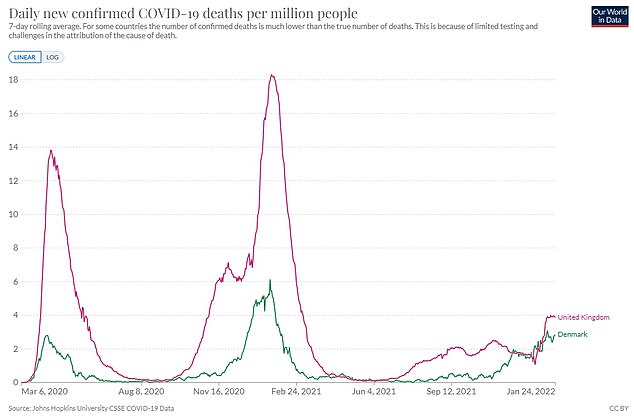 This graph shows the rate of Covid deaths per million people. It is higher in the UK (red) although this is a lagging indicator because of the time taken for someone who catches the virus to fall seriously ill 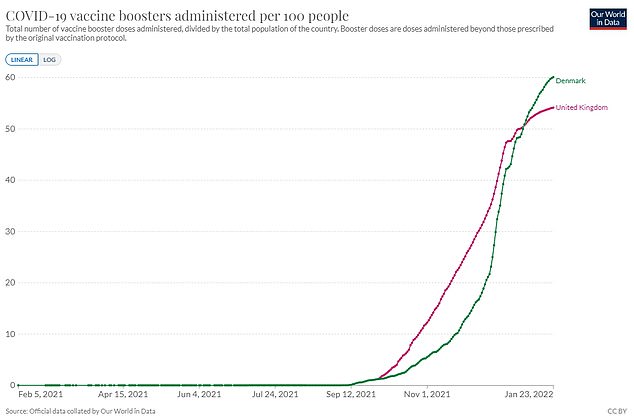 Both Denmark (green) and the UK (red) have vaccinated a similar proportion of their populations with a booster dose. The UK’s programme was also slightly ahead of Denmark’s 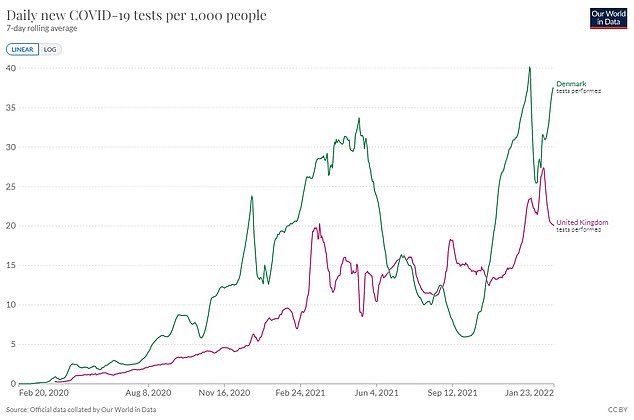 And both the UK (red) and Denmark (green) are carrying out a similar number of tests per 1,000 people, data suggests

BA.2 differs from the initial Omicron strain by around 20 mutations, scientists say, although only a few of these could make it better at evading vaccine-induced immunity.

It still carries changes that made Omicron more transmissible — and milder — than previous strains, but it is harder to detect.

What do we know about BA.2? Should we be concerned?

This is an off-shoot of the Omicron lineage.

It carries all the mutations of its parent, but also has a change that makes it harder to detect using PCR tests.

Omicron’s outbreak has been easy to track because it has an S gene drop out, unlike Delta, meaning it easily shows up on PCR tests.

But this is not the case with BA.2.

Is it more dangerous?

It is already the dominant strain in parts of India and the Philippines, scientists say, with cases now rising in the UK, Germany and Denmark.

But there is no evidence to suggest it is more likely to cause serious disease.

Dr Tom Peacock, one of the first scientists to warn the world about Omicron, says there is no reason to be overly concerned.

The Imperial College London expert said he thinks the variant will not have a ‘substantial impact’ on the current wave.

Professor Francois Ballous, a geneticist at Imperial College London, says people not obsessed with Covid should treat it as the same disease as Omicron.

The original Omicron has a specific alteration — known as an ‘S’ gene dropout — which meant it could be detected through PCR tests without the need for lab analysis.

But this does not appear to be the case with BA.2.

It does not mean that BA.2 is completely undetectable by PCR, but samples will need to be sent for further analysis to confirm it is the subvariant.

Data from the Sanger Institute shows there were 300 cases of BA.2 detected in England last week, out of 38,000 samples analysed. This was up from 78 the previous week.

Over the same period, Delta infections dropped from 482 to 179. Delta also carries the ‘S’ gene.

The areas with the most BA.2 infections are Brent (nine cases) and Barnet (also nine cases), which are both in London.

‘(But) both are loose change compared to BA.1 (the original Omicron variant).’

Britain is currently only checking around one in ten cases for variants because of the scale of its outbreak, meaning the true number of BA.2 infections every week may be closer to a thousand.

The rise in BA.2 cases co-incides with the flattening off of the UK’s outbreak, which has ticked up week-on-week for the last two days in a row.

But schools also returned earlier this month, sparking fears from some quarters that they could trigger an uptick in infections.

In Denmark where it is dominant the country is currently recording 6,500 cases a day per million people, while the UK is registering 1,300 per million.

Both countries have boosted around 60 per cent of their population against Covid, and are carrying out a similar number of tests.

Some 2,093 cases of BA.2 have been detected globally, since the separate mutant strain was first spotted in South Africa.

They have been detected in 22 countries including the UK, US and Australia. In the US there have been 27 cases so far.

This category is reserved for variants that are already spreading in the UK, and are likely more transmissible and better able to evade vaccines than others.

It is one step below a ‘variant of concern’, a title listed for mutant lineages like Omicron, Delta and Alpha. But UKHSA bosses could yet decide to place it in the highest category. 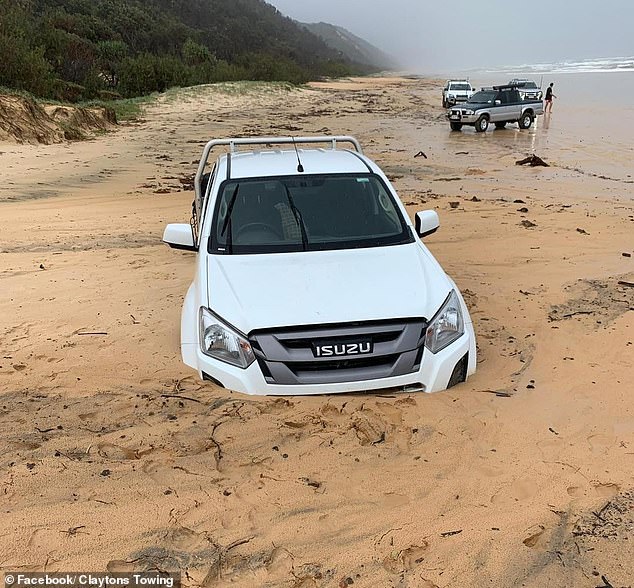 Advertisement Off-road enthusiasts are calling for Australia to introduce a new licence for 4WD drivers amid a rise in blokes with kitted up vehicles getting bogged on outdoor adventures.  Advertisement Tow truck drivers have been making a fortune rescuing Aussies ‘with all the gear and no idea’ as drivers with ‘no skill level’ get stuck… 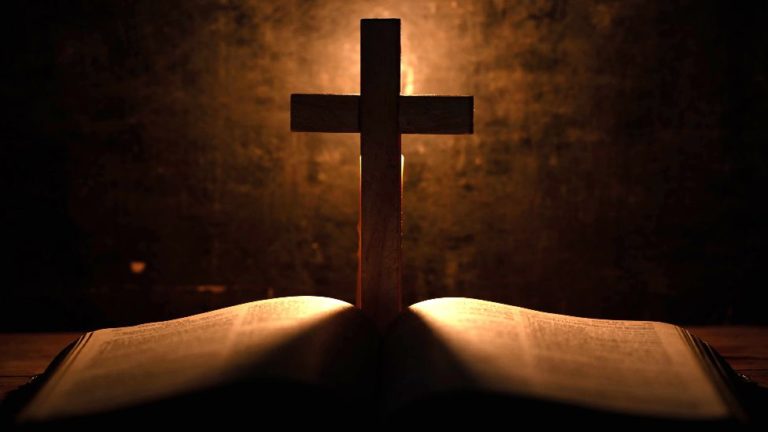 Advertisement A stampede at a church gathering in Liberia’s capital Monrovia killed 29 people overnight, the deputy information minister told state radio on Thursday. The incident occurred during an all-night Christian worship event at New Kru Town, a neighbourhood on the outskirts of the capital, deputy information minister Jalawah Tonpo said. Advertisement He did not… 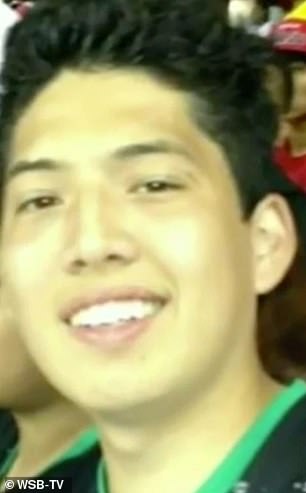 Advertisement Five Georgia cops are indicted for murder after concertgoer, 24, who was walking naked along the road died when they ‘tased him more than a dozen times while they held him on the ground handcuffed’ Fernando Rodriguez, 24, died of asphyxiation after Georgia officers stopped him Robert Butera, Quinton Phillips, Mason Lewis, Marcus Stroud… 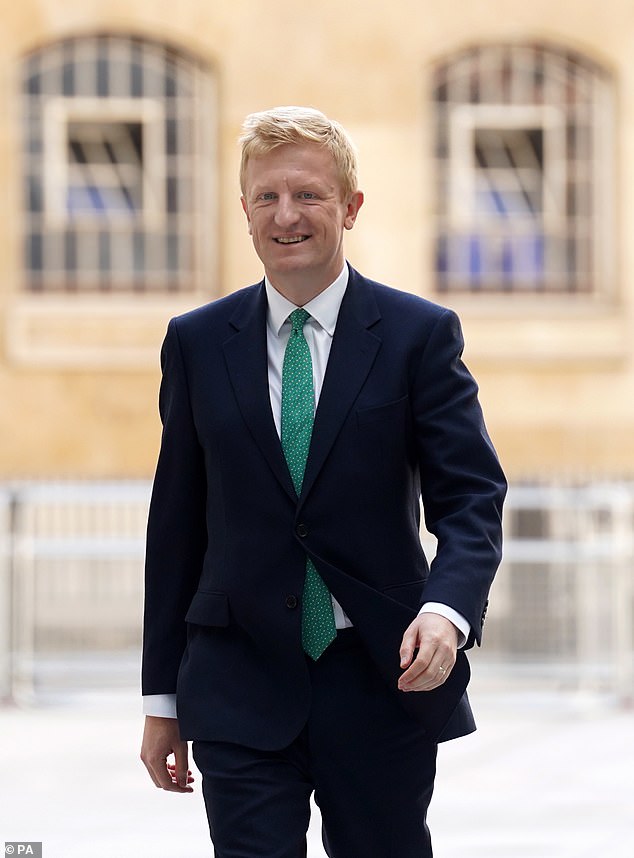 Advertisement Labour was last night accused of stitching up Boris Johnson by forging a secret pact with the Liberal Democrats to sway this week’s local election results. Advertisement Tory chairman Oliver Dowden claimed Sir Keir Starmer was standing down candidates ‘in swathes of the country’ where Lib Dem support is strong to avoid splitting the… 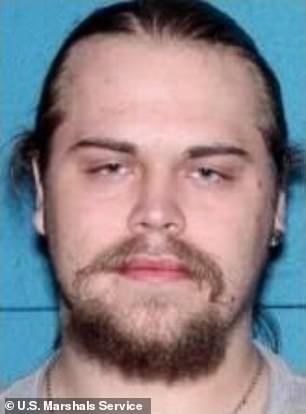 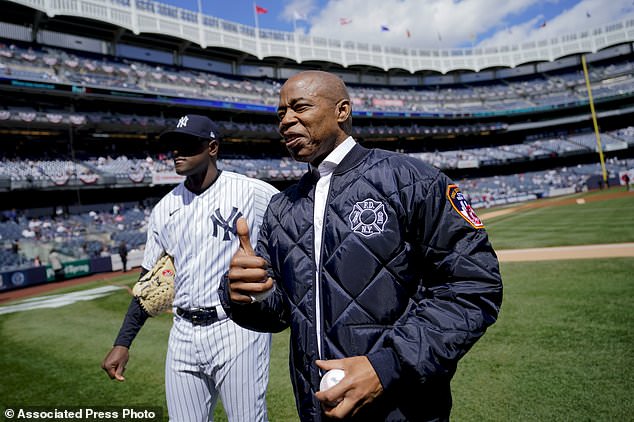 Advertisement NYC Mayor Eric Adams tests positive for Covid-19 after attending ‘super-spreader’ Gridiron Dinner event in DC that resulted in more than 60 cases including AG Merrick Garland Adams woke up with a raspy voice Sunday and took a PCR test that came back positive, spokesperson Fabien Levy said in a statement Adams has no…