As the countdown to the first eviction ceremony hots up, Laycon has expressed his regrets about his time so far in the house.

He said: “There are a couple of things I should have done and one or two things I shouldn’t have done too. I thought about it earlier today and I know if I’m still here by tomorrow I will certainly be doing a lot of things differently. One is my tolerance which has allowed some disrespectful things happen to me and which I should have not allowed. I should have been more assertive. Moving forward I want to let people know how I feel immediately I feel they’re doing things I don’t like. One of the housemates that I’m close to was giving me attitude so I stepped back a bit from him. He got the message and though he didnt come out to apologize but we patched up and we are cool now.

“Secondly, I’m beginning to have feelings for one of the housemates and I need to focus on why I’m here. This particular housemate that I’m close to, some of the things that happened last week distracted me and I didn’t like that. These are some of the things thaf I would work on if I escape eviction. I will make mistakes here but not allow them to define me but I will use them to grow as a human being.” 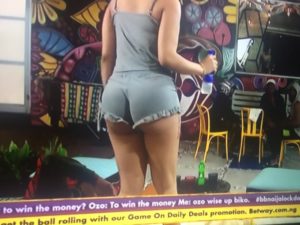 During his diary session with Big Brother, the budding artiste admitted that he was pretty scared about the eviction and hoped he can escape being kicked out of the House.

“I’m actually very scared. It’s (eviction) not what I’m looking forward to. I’m scared for myself and for some others that I have bonded with in the House. Hopefully I would still be here tomoro after the eviction party,” he began.

Laycon also revealed that he has had a very wonderful time in the House and looks forward to continue his stay with the friends he has made.

Asked about his regrets so far during his time, Laycon pointed at two which he hopes to correct should he have a second chance.

On his favourite moment in the House, Laycon picked the moment his song was played while the housemates were in the garden.