BBNaija 2020: See why Erica told Kiddwaya she is not stupid (video)

Kiddaway kissed Erica at the truth and dare games but their relationship has hit a brick wall since.

In an astonishing rant, Erica accused Kiddwayaof wanting sex from her.

Erica then came out to bear her true feeling for Kiddwaya which eventually led to another kiss under the sheets. 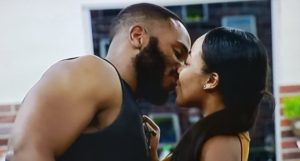 Erica told Kidd that, “There is no space for someone like you in my heart. It’s just unfortunate that i am attracted to you and with time it will go.

“I can’t be with someone that doesn’t respect me.

“I am not stupid, I know the kind of guy you are but it just happens that i really like you.

After they both kissed Erica then told Kiddwaya that, “I so much like you am feelig so so sorry for myself.”