Bec Judd has pointed to crime data to back up her claim that a terrifying crime wave is gripping her rich suburb as she wages bitter war with Premier Dan Andrews.

The footy WAG last week sparked uproar when said she felt ‘unsafe’ in her $7.3million mansion in Melbourne’s wealthy Bayside suburb of Brighton.

Judd claimed the Victorian Government didn’t ‘seem to care’ about the ‘rapes, bashings and home invasions at the hands of the gangs in Bayside’.

Mr Andrews dismissed her claims as ‘sweeping assessments’ and insisted: ‘I’m sorry she feels that way. The data would tell a different story.’

Crime statistics for the area tell a more complicated story than either of their assertions, and a new police task force has been formed to tackle youth crime. 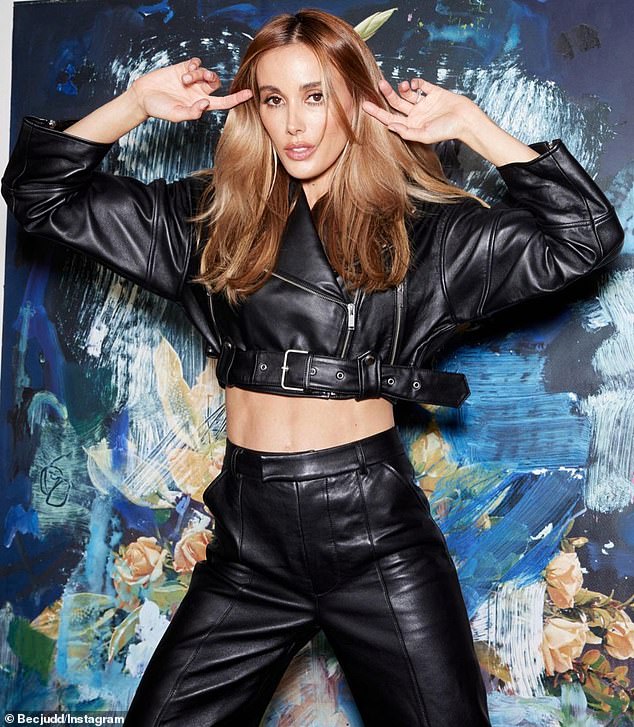 Certain crimes in the area have noticeably increased over the past 10 years and hit record highs, with home break-ins quadrupling since 2014 and aggravated robberies at their highest in five years.

Bayside Local Area Commander Inspector Cath Wilkins admitted to The Australian that there ‘has been an increase in offences recently’.

But she said that while the suburb had ‘seen a number of serious incidents recently, Bayside remains an overwhelmingly safe place to live.’

Judd maintained crime was worsening in her neighbourhood and credited her attack on Mr Andrews with the creation of the new police taskforce.

‘I’m glad my voice has shone a light on the escalating aggravated burglaries in Bayside,’ Judd claimed to The Australian.

‘[While] we are thankful for low non-aggressive crime rates, the increasing nature of home invasion-type crimes in our local community is what makes residents, particularly women, feel unsafe.

‘I welcome Operation Ibis and the extra 500 police promised to the people of Victoria.’ Dan Andrews dismissed her claims as ‘sweeping assessments’ but new figures show crime in the area HAS exploded in recent years, with home burglaries quadrupling

Ms Judd triggered the storm last week when she posted details of recent home invasions in the area on Instagram.

‘I personally know two women who have experienced home invasions in Brighton in the last few weeks while they were at home,’ she said.

Mr Andrews insisted the crime statistics did not back up her claims though and said he was ‘not interested in having an argument with Ms Judd’.

But he added: ‘I’m also obliged to point out though, I think there are more than 70 additional police in the Bayside area.

‘And the most recent crime statistics released by an independent agency would not support those sweeping assessments about patterns of crime.

‘I say this respectfully to Bec Judd, or anybody – I don’t want anybody to feel unsafe. I’m sorry she feels that way.

‘The data would tell a different story, but it is about personal feelings and your sense of safety.’

However, those 70 extra police referred to by Mr Andrews were part of a three year task force that ended in 2021. 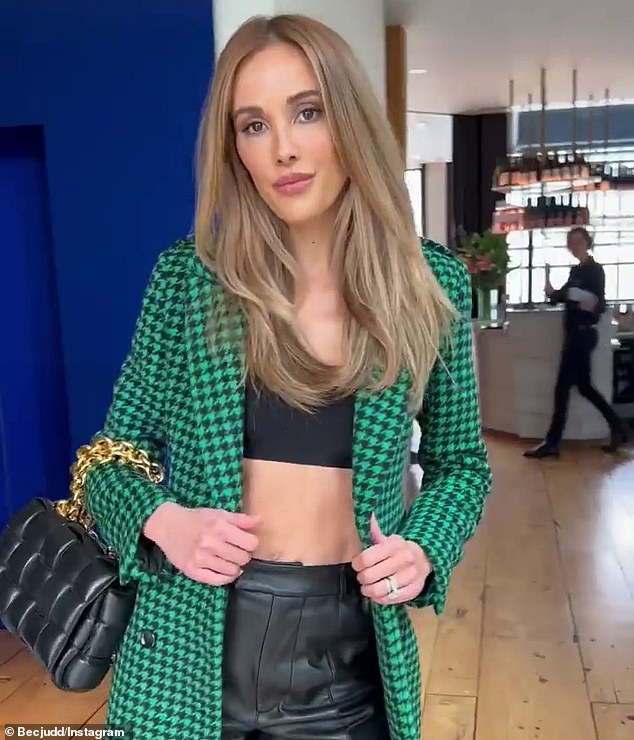 The stats also show Bayside locals are more likely to be attacked by someone in their own family than by a stranger bursting into their home.

Common assaults outside the home have also increased year on year, recording the second highest figure in 10 years with 85 offences in 2021, while aggravated robberies also hit an all-time high of 29 cases, up from 12 in 2019.

The area also suffered four homicides, more than any other year in the past decade.

By comparison, suburbs around Toorak suffered less than three homicides – down from 8 in 2019 – while the area also saw 288 common assaults, the second highest in 10 years, and 60 aggravated robberies, up from 42 the previous year. 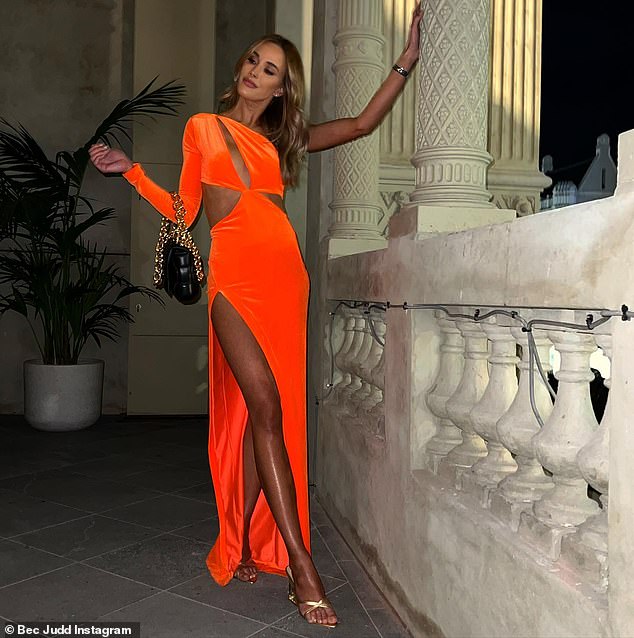 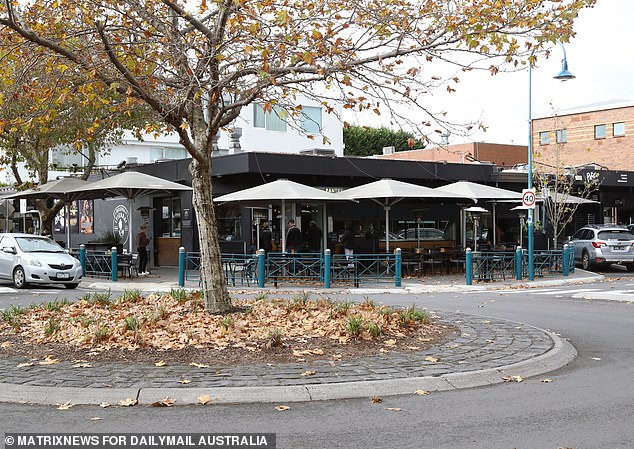 In the past 18 months, Brighton has been rocked by the rape of a 16-year-old girl, the stabbing of a teenage boy, and two 10-year-olds attacked by a gang of knife-wielding teens.

An 83 year old man was also confronted by teens armed with knives who tried to steal his car from his home, while just this weekend two boys aged 13 and 14 broke into another home and stole two cars.

Just as the statistics tell a complicated story about crime in Brighton, locals are divided about whether the area is less safe than it used to be.

Daily Mail Australia spoke to a mix of residents and shopkeepers along Brighton’s main strip, which is littered with well-to-do cafes, boutiques and restaurants. 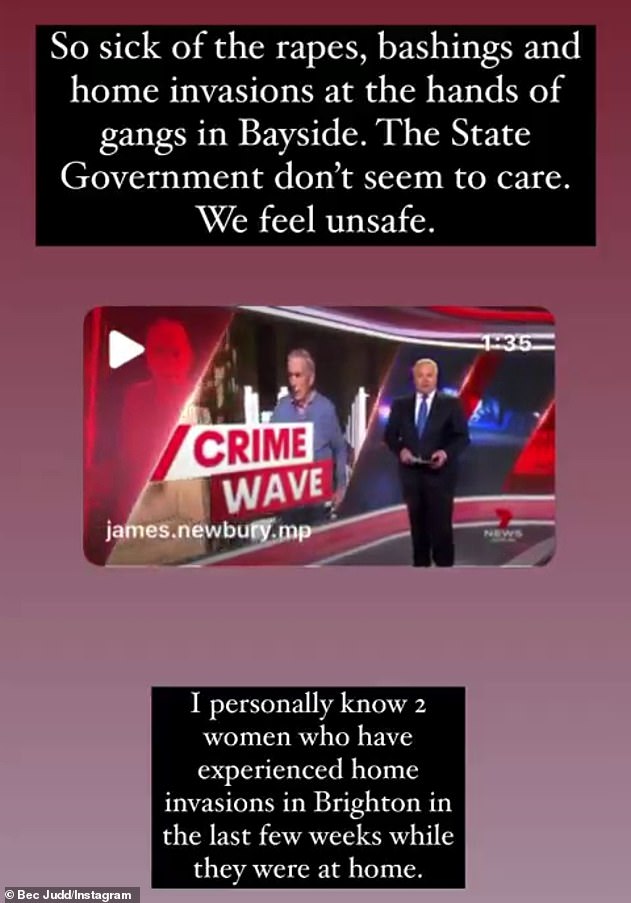 Scared: ‘So sick of the rapes, bashings and home invasions at the hands of the gangs in Bayside,’ Bec Judd wrote to Instagram 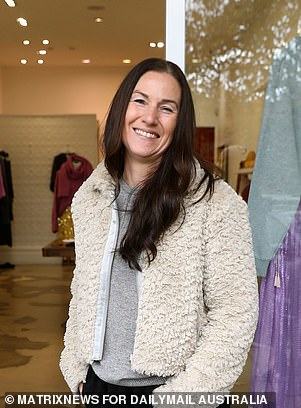 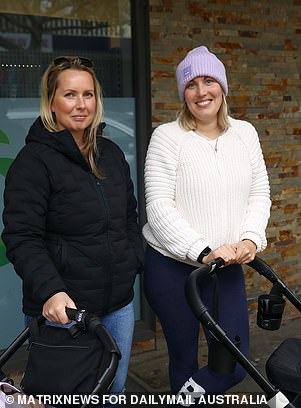 One shopkeeper, who did not wish to be named, said her salon had been targeted numerous times by opportunistic thieves in recent times.

Attacking in the dead of night, the crooks had smashed their way into the Church Street shop and helped themselves to whatever they wanted.

So concerned about the thefts, iron bars have now been erected outside, caging the shop in when the sun sets.

‘It’s a smash and grab thing. They smash our window, they grab whatever they want and they run away,’ the female shop owner said.

‘During the two years of Covid, it didn’t happen because police were patrolling the area… but as soon as everything unlocked then we got broken into twice in a month.’

While the bars outside the salon would not look out of place in most retail outlets west of the city, here, they are an anomaly.

‘At least now I can sleep at night,’ the shop owner said. 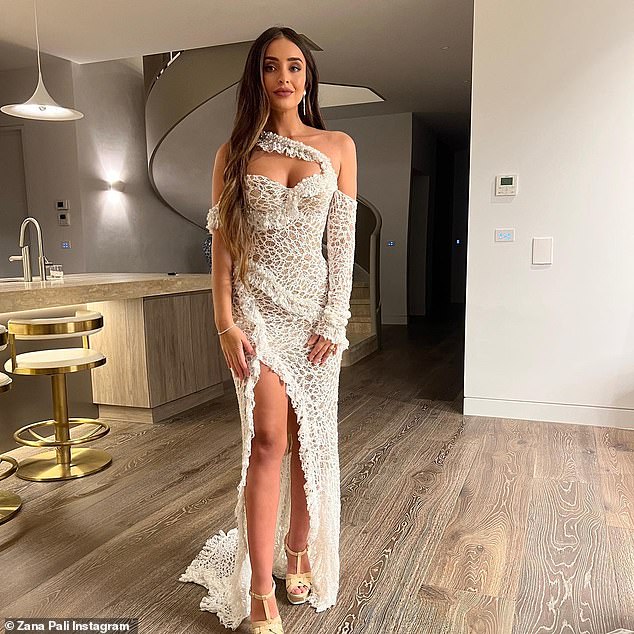 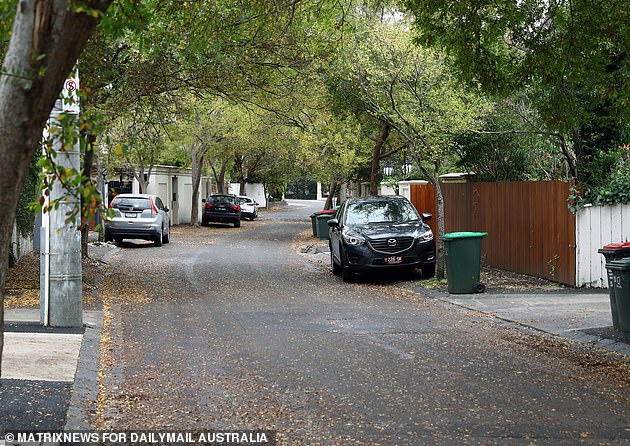 They don’t call it ‘leafy Brighton’ for nothing. Residents in the well-to-do suburb fear a crime wave is afoot

It is a similar story along the strip of shops, where at least two others businesses have recently fallen victim to repeated opportunistic smash and grabs.

Up the road, crowded around a popular coffee shop, two Brighton locals tell Daily Mail Australia they too are aware of a spate of ugly incidents.

Home invasions and car thefts are crimes not overly familiar on home soil in these parts.

‘We’ve heard about car thefts just around the corner here,’ they said, gesturing toward another well presented street.

Sitting on the cold footpath desperately trying to keep warm, Ronnie had only a few coins in his paper cup.

The homeless man has spent the best part of three years living on and about the streets of Brighton, where people tend to be more generous, he said. 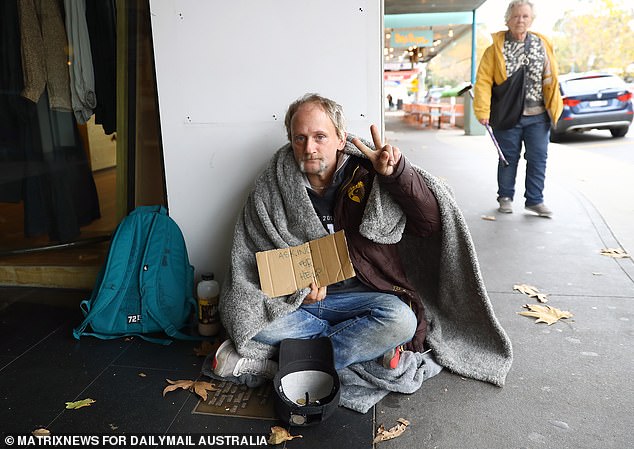 Homeless man Ronnie has called the streets of Brighton home for years. He said he continues to feels safe there

While some locals told Daily Mail Australia they associated the reported influx in crime with a return to the streets of Melbourne’s homeless, Ronnie said he had never felt safer getting about Brighton.

‘We started coming out here when they tossed us out of the CBD during Covid,’ Ronnie said.

Ronnie said he had not seen a single crime committed since returning to Brighton post Covid.

‘I have seen absolutely nothing. I mean you go into Coles and there is no security guard in there. You go to Woolworths and it’s the same there. So I’d hate to think that crime is coming to Brighton because it’s always been so safe,’ he said.

Situated about 11km out of Melbourne’s CBD, Brighton is the playground of the rich and famous. 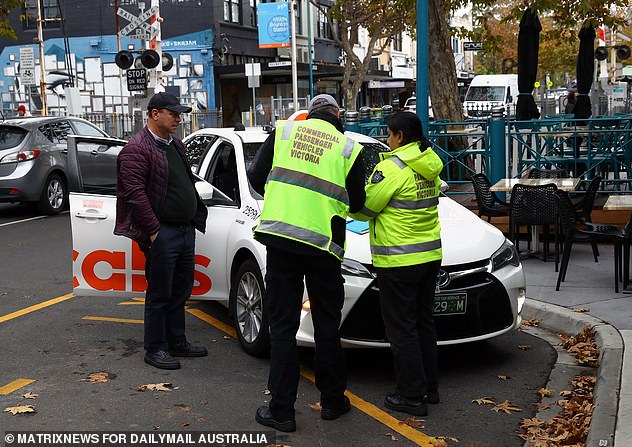 Crime wave: Cabbie inspectors checking out a vehicle was the only sniff of a crime possibly occurring in Brighton on Tuesday

It’s a suburb where hired help use high pressure hoses to spray leaves off the road during a rain storm.

Employees from households walk dogs in the rain and gardeners put on raincoats and continue cutting the hedges.

The suburb made headlines last week when Judd, a fellow resident and social media influencer, claimed she felt ‘unsafe’ in her $7.3 million mansion.

Pali backed her up via Instagram on Monday night, stating there was a ‘clear target’ on the Bayside which was causing ‘anxiety and fear among the community’.

The mother-of-two claimed ‘it was only a matter of time before someone gets killed’ and said she had received ‘countless’ messages from other worried locals who said they were scared to sleep at night in fear of being robbed. 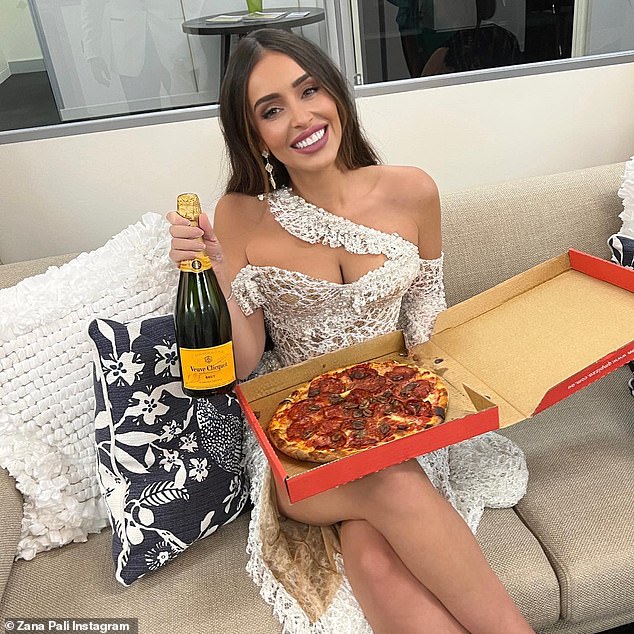 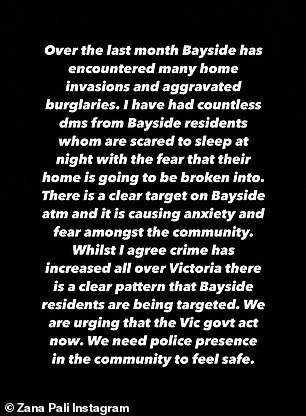 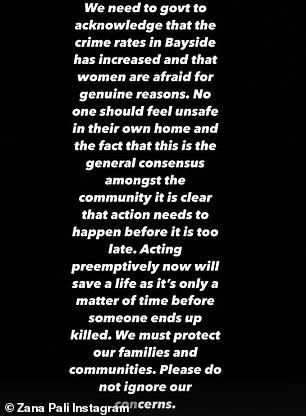 Brighton resident Lyla, who like everyone else wished to remain at least partially anonymous, said while Brighton residents weren’t used to seeing homeless people on their streets, she too had heard stories of home invasions.

‘But on the street I haven’t personally noticed anything out of the ordinary. There was a wave of shops being broken into.’

‘There have been home invasions, I’ve seen it, but I haven’t heard it’s anything more than what usually goes on.’

Court sources have told Daily Mail Australia a good friend of a well respected judge had been the victim of one such attack.

Other Brighton locals claimed kids wearing ‘sh**ty tracksuits’ had caused some fear among the general population.

‘There’s been like gangs of youths. I sit here and go “they’re not from Brighton”. I think it’s the way they dress, they’re all just wearing sh**ty tracksuits and they look like bogans,’ one woman said.

‘You need to go to Elwood. There’s a lot of crime in Elwood at the moment,’ her friend said. 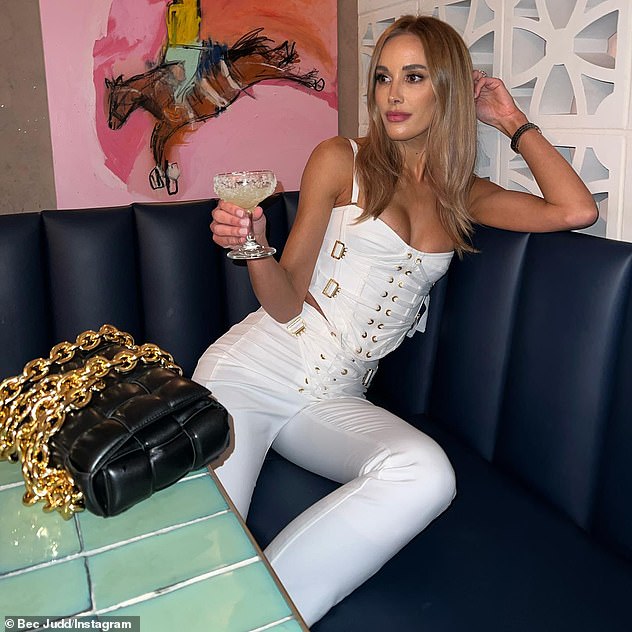 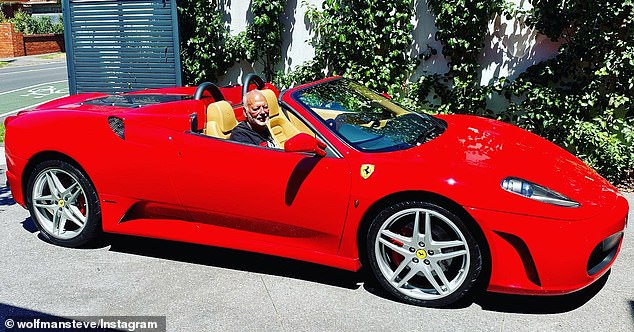 Local man, Steve Wolf, claimed the ritzy suburbs had become ‘astronomically worse’ since he moved to Brighton in February 2019.

Mr Wolf said in recent months his front gate was smashed, people with knives slashed a Liberal Party sign on his fence, and he’s been the victim of an attempted carjacking while driving his Ferrari.

Back on the streets, Bayside blow-ins from across the walk happily strolled along the main drag to catch-up for lunch.

Nicola and Johanna said they felt safe in Brighton and had heard nothing more than reports of a few online ‘Gumtree’ scammers using the location to hoodwink locals.

‘We go out for lunch once a week in Brighton and we’ve never had any issues, but now I’m a bit worried. Should I look over my shoulder?’ Johanna laughed.

As Daily Mail Australia endeavoured to cordon-off more locals to address the reported crimewave, one elderly resident couldn’t help but offer an opinion.

Dressed smartly in the kind of ensemble one would expect from a lifelong residents of the jewel in Bayside’s crown, she suggested what perhaps the Victorian premier was thinking. 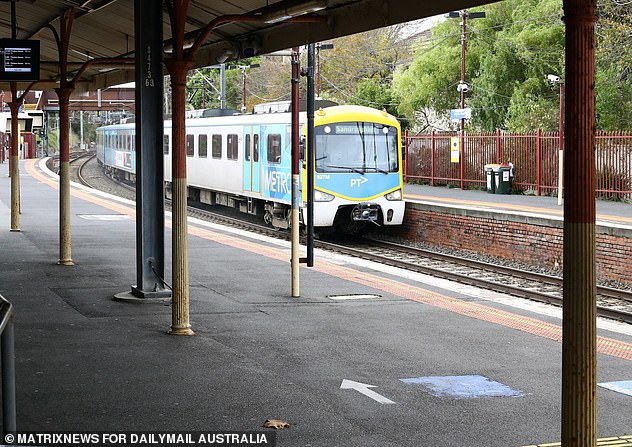