President Joe Biden visited the Augusta Victoria Hospital in East Jerusalem Friday morning and announced he will ask Congress to fund $100 million for healthcare services for the hospital network, which serves the Palestinian population.

‘Palestinians and Israelis deserve equal measure of freedom, security, prosperity and dignity and access to healthcare, when you need it, is essential to living a life of dignity for all of us,’ the president said during brief remarks.

Biden followed in the footsteps of his wife, First Lady Jill Biden, who had visited the hospital twice before.

His visit, according to the hospital’s CEO and East Jerusalem Hospital Network Secretary General Dr. Fadi Atrash, was ‘bringing hope to thousands of Palestinians.’

‘We Palestinians are same like Americans,’ Atrash said. ‘We have our own dream that we want to achieve. And for this we need hope, justice, freedom and support from friends like you in America and all over the world.’

‘We are extremely, extremely happy to have you and you are most welcome, Mr. President,’ Atrash added. 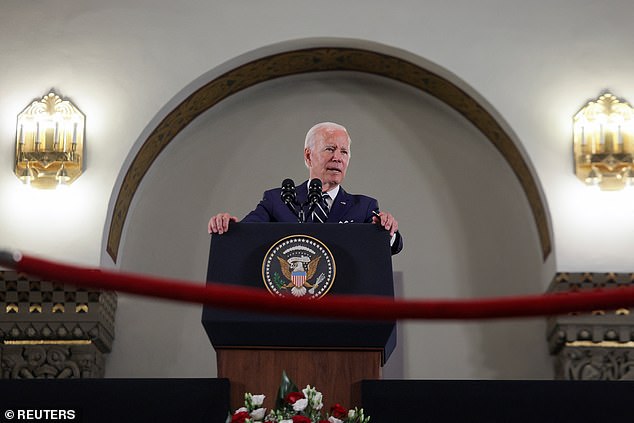 President Joe Biden visited the Augusta Victoria Hospital in East Jerusalem Friday morning and announced he will ask Congress to fund $100 million for healthcare services for the hospital network, which serves the Palestinian population

When Biden took over the podium he talked about being Irish-American, likening the Palestinian-Israeli conflict to Irish Catholics’ relationship with Great Britain.

He then asked, ‘Are there any nurses in the room?’

‘Because if not, I’m going home,’ the president said to laughs. ‘If there are any angels in heaven – no, no, no I mean this sincerely from the bottom of my heart.’

‘My wife and daughter were killed and my boys were trapped in a vehicle for there hours when a tractor-trailer hit them – the doctor saved their lives, but the nurses made them want to live,’ Biden said.

The president talked about his own healthcare challenges, double aneurysms with an embolism on top of that.

‘I joked the reason they went in twice to take the top of my head off is they couldn’t find a brain the first time,’ Biden said.

In a more serious tone he added, ‘I don’t think you nurses are nearly appreciated enough.’

He recalled being in the intensive care unit – saying he had never made these comments publicly before.

‘And you look at the monitors and you know if the line goes flat you’re dead,’ the president said. ‘But you just get tired, even when you’re not in pain, you just want to quit.’

‘And the nurses at Walter Reed Hospital. Would come up, and they’d rub my face, they’d whisper in my ear. They’d get close and tell me, it’s going to be OK. They made a difference in my life,’ he said.

He then turned to his late son Beau Biden, who died of Glioblastoma in 2015, which the president said he believed was a product of his son’s service in Iraq, as the Delaware attorney general was sleeping close to burn pits.

‘He should be the man talking to you as president, not me,’ Biden remarked.

The president then turned back to the business at hand – announcing the $100 million commitment to the Palestinian healthcare system.

‘Working together, it is my prayer the United States will both relieve the hospital’s burden of debt, and support targeted infrastructure updates and key reforms in patient care, to ensure longterm financial stability,’ he said.

‘We also welcome the $25 million contribution from the UAE. And I encourage other nations around the region and around the world to step up as well with their own contributions to support the vital work that’s being done here,’ the president added.

He said that the ‘United States will continue to work with the Palestinian leadership, with the government of Israeli and with all our international partners to ensure that East Jerusalem’s hospital network retains sustainable, remains available and is able to provide high-quality care the Palestinian people deserve.’

After the hospital stop, Biden will meet with Palestinian President Mahmoud Abbas in his last stop in Israel before he heads to Saudi Arabia to meet with its controversial crown prince.

Biden will offer Palestinians a commitment from Israel to modernize wireless access.

But that will be all that he has to offer.

Biden supports a two-state solution but there is no clear path to an independent Palestinian state.

‘There are practical realities on the ground that we are very mindful of so we have not come in with a top-down plan but we have always said that if the parties are ready to talk, and we think they should, we will be there, right beside them,’ said a senior administration official.

The Palestinians want an independent state in east Jerusalem, the West Bank and Gaza – territories Israel seized in the 1967 Mideast war.

The international community also supports the idea but it appears to be a distant goal amid hardening attitudes on both sides.

Yair Lapid, the caretaker prime minister, supports two states but he does not have a mandate to hold peace negotiations. And Israel’s Nov. 1 elections could bring to power a right-wing government that is opposed to Palestinian statehood.

Biden will meet with Abbas, 86, who heads the Palestinian Authority that administers parts of the occupied West Bank and cooperates with Israel on security.

The president will spend his last day in Israel focused on the West Bank after there has been hardly any mention of the Palestinians over the past two days.

Biden’s focus has been on the U.S.’s longtime ally Israel and he has repeatedly praised the country during his time on the ground.

Israeli officials objected to not having any of their officials with Biden on the hospital stop, which they see as happening in their territory.

But a senior administration official called it a ‘private visit’ and pointed out Jill Biden visited the same hospital when she was second lady, arguing the Bidens have long ties to it.

After the hospital stop Biden will visit with Abbas in Bethlehem and then see the Church of the Nativity.

He then heads to Saudi Arabia.