Boris Johnson is today gathering a new ‘unity Cabinet’ as he promotes ministers who did not quit in the Tory revolt – and blocks those who betrayed him from making a comeback.

Even as he announced his resignation as party leader, the PM was putting together names to fill the gaps left by the coup.

The new-look team will be in charge of the government until a new leader is installed potentially in October – a delay that is causing widespread fury among MPs.

Long-term allies James Cleverly and Kit Malthouse were promoted to become Education Secretary and Chancellor of the Duchy of Lancaster respectively.

Johnny Mercer has also been appointed Minister for Veterans’ Affairs and will attend Cabinet.

And Mr Johnson also acted to shut the door on those who had walked out of government in order to force his resignation statement – many of whom might have been eyeing a quick return.

After he brutally took revenge by sacking Michael Gove last night, Mr Johnson handed his Levelling Up job to Greg Clark – a centrist who was last in Cabinet under Theresa May.

Robert Buckland makes a return as Welsh Secretary, having previously been axed as Justice Secretary in a reshuffle last year. He replaced Simon Hart, who quit last night. 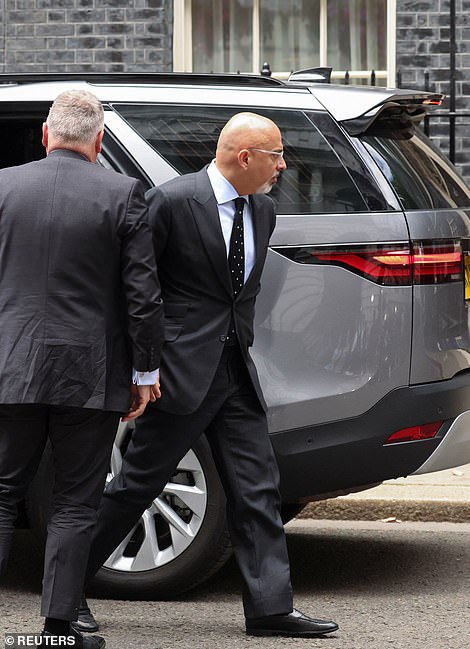 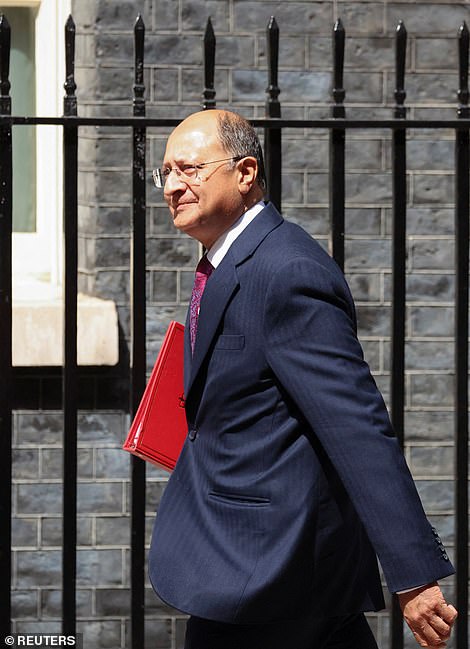 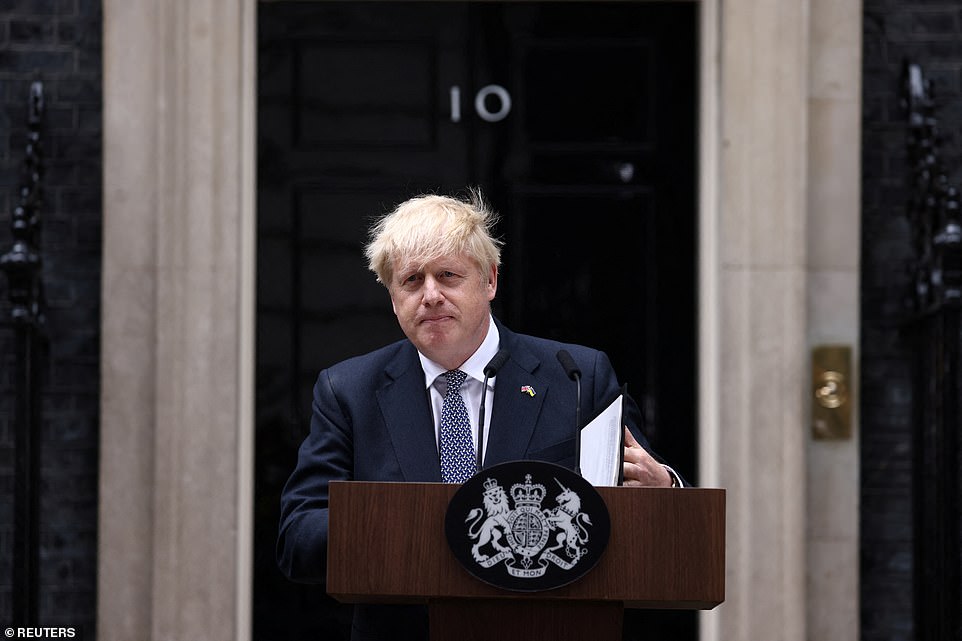 Even as he announced his resignation as party leader, the PM was putting together names to fill the gaps left by the coup 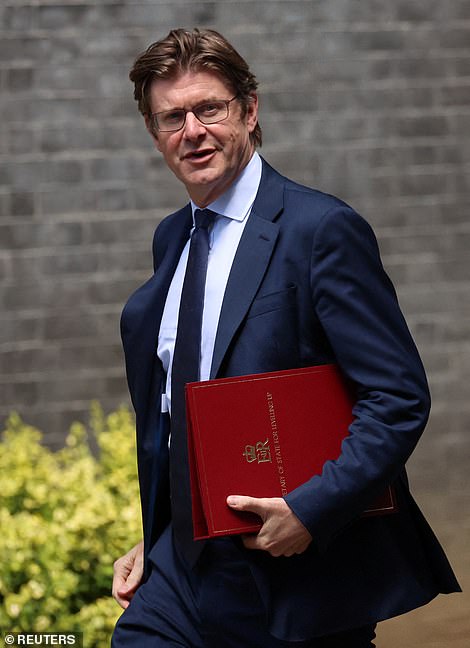 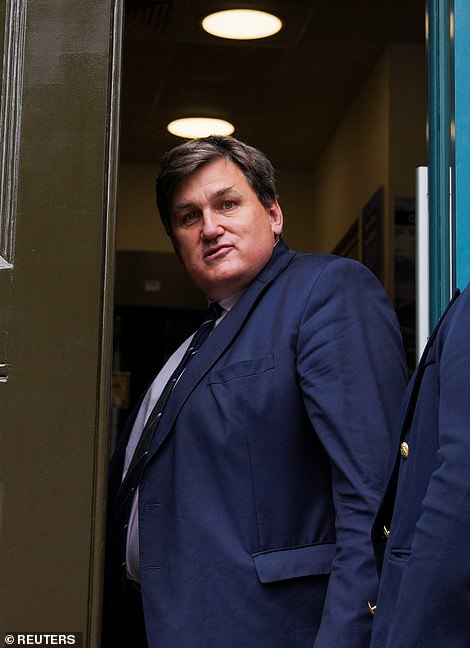 After he brutally took revenge by sacking Michael Gove last night, Mr Johnson handed his Levelling Up job to Greg Clark (left) – a centrist who was last in Cabinet under Theresa May. Kit Malthouse (right) was promoted to become Chancellor of the Duchy of Lancaster

Shailesh Vara takes over as Northern Ireland Secretary, the department where he was once a junior minister, following a spell outside government.

That post was vacated by Brandon Lewis, who fell on his sword early this morning amid the desperate efforts to get Mr Johnson to recognise his time was up.

However, it is far from clear that Mr Johnson staying on until October – more than two months – will be acceptable to Tory MPs. There are rumours that Mr Johnson still wants to push key policies such as tax cuts.

Keir Starmer threatened to call a Parliamentary confidence vote and try to force a general election if Mr Johnson does not leave immediately.

‘He needs to go completely. None of this nonsense about clinging on for a few months,’ he said.

Former PM Sir John Major has written to the chairman of the Tory 1922 Committee warning it is ‘unwise’ for Mr Johnson to remain in office, suggesting either an interim premier or a streamlined election process ‘in the national interest’.

New Levelling Up Secretary Greg Clark said that he will do his best to ‘provide stability’ in Government.

He tweeted: ‘We have a duty to ensure that the country has a functioning government in the weeks ahead.

‘Having been Secretary of State at the Communities department before, I will do my best to provide stability, good governance and accountability to Parliament at this important time.’

There was a similar message from Mr Malthouse, who said: ‘While my party decides on a new leader HMG must continue and we all have an overriding duty to put our shoulder to the wheel if asked to serve.

‘I hope to bring stability to the Cabinet Office at a time of political transition.’

Sir Robert Buckland said he was ‘here to help’, after taking up a post in Cabinet.

He also said that Boris Johnson would not have the authority to do ‘new’ things in government.

The new Welsh Secretary defended his decision to join Mr Johnson’s new-look caretaker Cabinet, stressing that he felt the need to ‘help and serve’.

He said: ‘I felt it was right that I did that now. The issue about the Prime Minister and his character has been settled. He no longer has the confidence of the Conservative Party. He is resigning. That is right. But the business of government goes on. I’m here to help.’

Sir Robert said he would not have accepted a position yesterday, but the fate of the PM was ‘now dealt with’.

‘He did the right thing and resigned. He changed the circumstances by rightly resigning,’ he said.

Describing himself as a ‘team player’, Sir Robert said there was no such thing as an interim prime minister in the British system of government.

‘This Prime Minister no longer has the political authority to do new things,’ he said.

Mr Vara said: ‘A huge privilege to return to the Northern Ireland Office as Secretary of State. 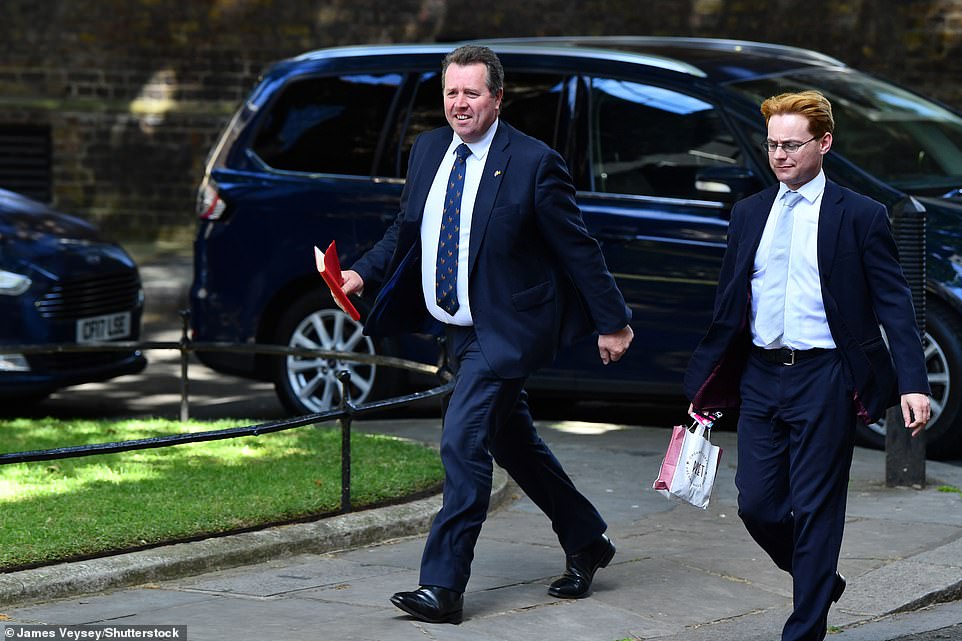 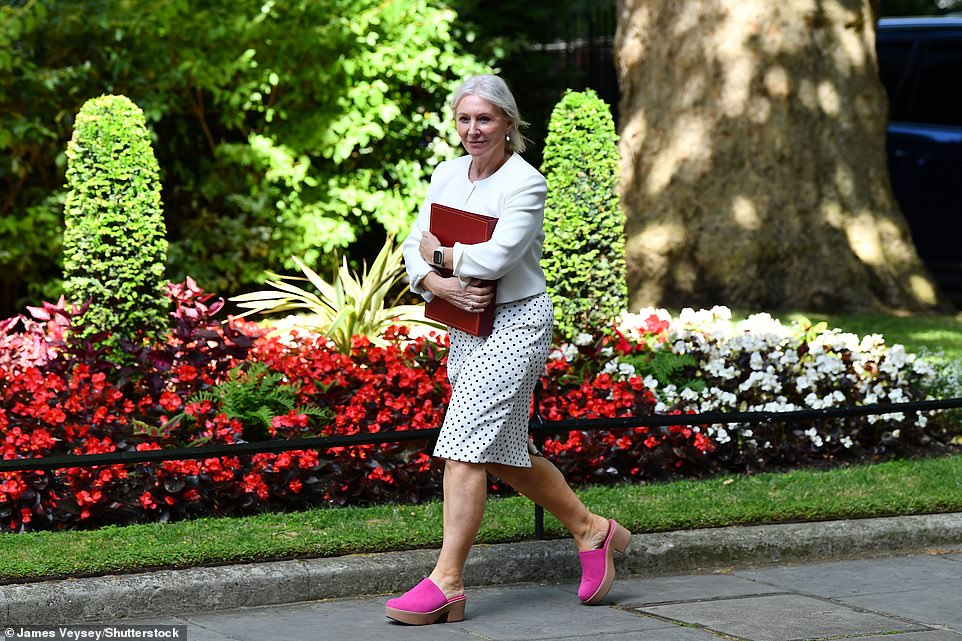 Nadine Dorries, a close ally of the PM, was among the senior figures walking into the building on a dramatic day

‘Having served previously in the Department I recognise the immense contribution of Northern Ireland, and its people, to the UK and I look forward to representing those interests at the Cabinet table.’

In his Downing Street speech, Mr Johnson said he is ‘immensely proud’ of the Government’s achievements.

‘I’m immensely proud of the achievements of this Government, from getting Brexit done to settling our relations with the continent for over half a century, reclaiming the power for this country to make its own laws in Parliament, getting us all through the pandemic, delivering the fastest vaccine rollout in Europe, the fastest exit from lockdown, and, in the last few months, leading the West in standing up to Putin’s aggression in Ukraine,’ he said.

He said his successor’s priorities would be ‘helping families to get through … cutting burdens on businesses and families, and, yes, cutting taxes because that is the way to generate the growth and the income we need to pay the great public services.

‘To that new leader, I say, whoever he or she may be, I say: ‘I will give you as much support as I can’.

‘To you, the British public, I know that there will be many people who are relieved and perhaps quite a few who will also be disappointed.

‘I want you to know how sad I am to be giving up the best job in the world.’