Cool it, Ben & Jerry’s: Bosses of ice cream brand are accused of virtue-signalling after saying that sending migrants to Rwanda was ‘ugly, inhumane and racist’ and urging customers to join a planned protest march

By James Tozer for the Daily Mail

Ben & Jerry’s was told to stick to making ice cream yesterday after saying that sending migrants to Rwanda was ‘ugly’, ‘inhumane’ and ‘racist’.

The brand was accused of ‘virtue-signalling’ after urging customers to join a planned protest march against the policy.

This is despite it being owned by a multinational criticised for continuing to sell its products in Russia.

In a series of messages on its Twitter feed, Ben & Jerry’s wrote: ‘Listen up folks ’cos we need to talk about Priti Patel’s “ugly” Rwanda plan and what this means.’

It went on to label the policy to ‘forcibly send people to a country thousands of miles away’ as ‘cruel and morally bankrupt’.

Urging customers to ‘stand with refugees and fight against these inhumane plans’, it promoted posters advertising protest rallies this weekend and shared links to coverage of the policy in the Left-leaning Guardian newspaper. 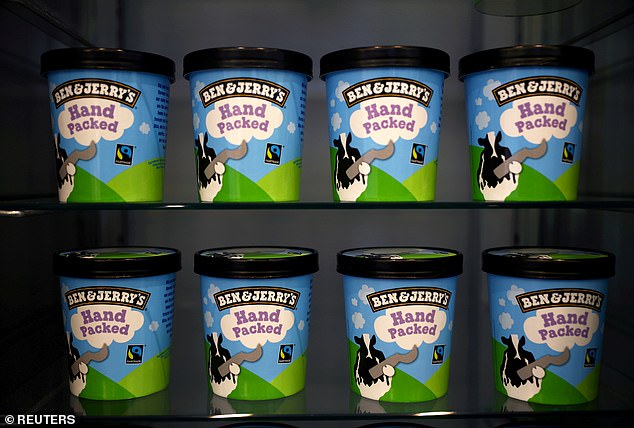 It also published a blog written by Detention Action – one of the charities trying to block the first plane taking foreign nationals to the African nation.

However the stance appeared to backfire as the thread was inundated by responses telling the firm to ‘stick to selling ice cream’.

One Twitter user accused Ben & Jerry’s of ‘pathetic virtue signalling’ and pledged to switch to rival luxury brand Haagen-Dazs. Another criticised the firm for ‘using their wealth to interfere in our democratically-elected Government’.

Others pointed out that a company based on selling unhealthy, sugary snacks was hardly in a position to take the moral high ground.

Founded in Vermont in the 1970s, Ben & Jerry’s has long campaigned on issues such as equality and climate change.

Under the terms of Unilever’s 2000 takeover, its directors continue to be able to adopt their own political stance. However it came unstuck earlier this year when it accused US President Joe Biden of ‘fanning the flames of war’ by sending extra US troops to Europe in response to the invasion of Ukraine.

Unilever chief executive Alan Jope said it was ‘best to stay out of the debate’ when brands lacked ‘expertise or credibility’.

Unilever was criticised in March for defying calls to pull products including Carte D’Or and Magnum ice creams from Russian shops. However, it has criticised the ‘senseless’ invasion of Ukraine.

Ben & Jerry’s and Unilever were both approached for comment.