Britons are set to enjoy the hottest day of the year so far today with temperatures expected to hit 33C (91F) amid a heat-health alert and a one in three chance of the country’s warmest day on record this week.

The mercury in central, southern and eastern England will soar this afternoon amid a heatwave blasting the nation – with the hot weather set to last until at least the weekend when temperatures could get up to 35C (95F).

Parts of the UK will be hotter than some of the world’s top beach destinations such as Hawaii, Jamaica, the Maldives and the Bahamas this week – with 33C (91F) highs expected today and tomorrow, and 29C (84F) on Wednesday. This will be followed by 28C (82F) this Thursday, 27C (81F) on Friday and 31C (88F) on Saturday.

The Met Office said there is a 30 per cent chance of the UK experiencing its hottest day ever day this Sunday – with the current forecast for 36C (97F) highs in London, although this could be upgraded in the coming days.

A Level Three heat-health alert from the UK Health Security Agency (UKHSA) began this morning, advising Britons to stay inside during the middle of the day, drink extra fluids and take extra care of young children.

Professor Mike Tipton, an extreme environments expert at Portsmouth University, warned of the health issues that can arise from high temperatures and claimed Britain could see nearly 2,000 extra deaths due to the heatwave.

Speaking on BBC Radio 4’s Today programme this morning, he said: ‘You get an increased likelihood of blood clotting and cardiac problems because of the extra strain heat puts on the body. We’ll see anything between 1,000 to 2,000 excess deaths due to the heat over heatwaves and the vast majority of those are in the elderly.’ 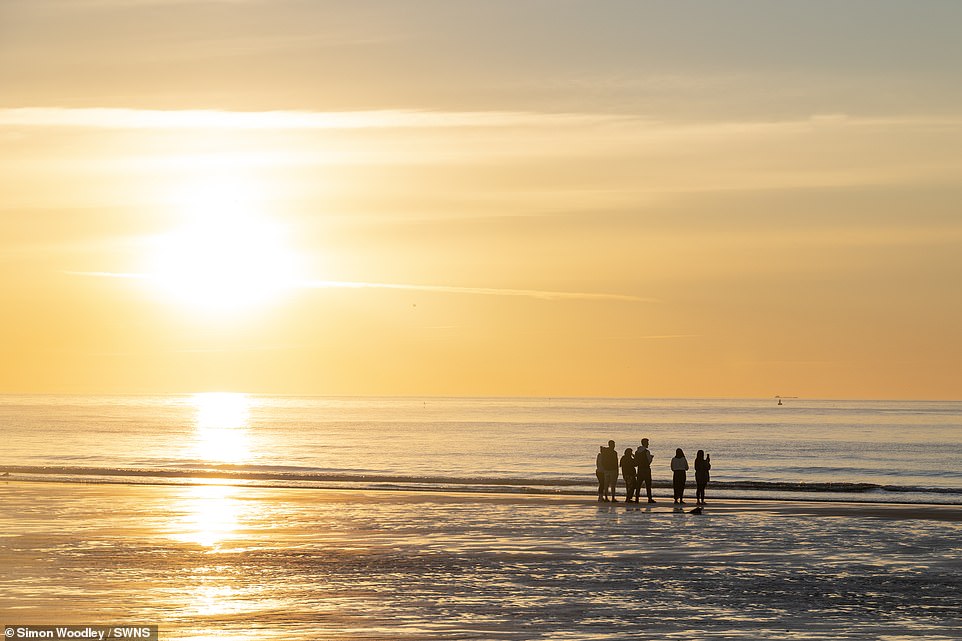 The sun rises at Roker beach in Sunderland this morning as early walkers, fishermen and sunrise watchers enjoy the cool air 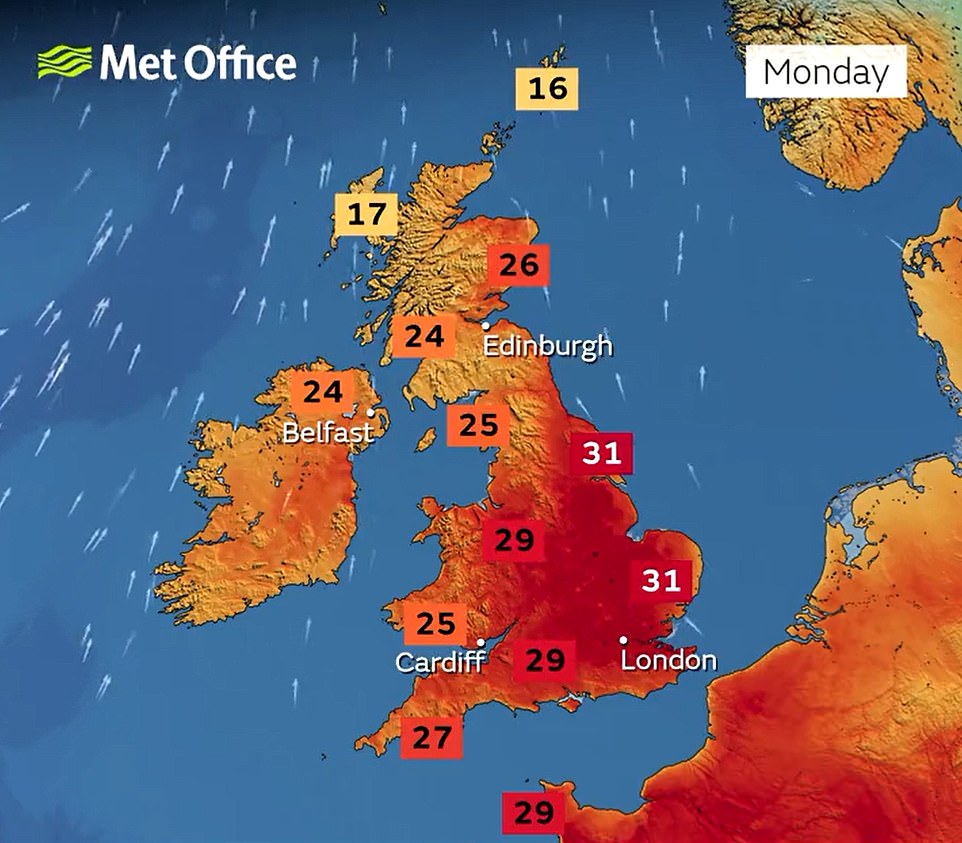 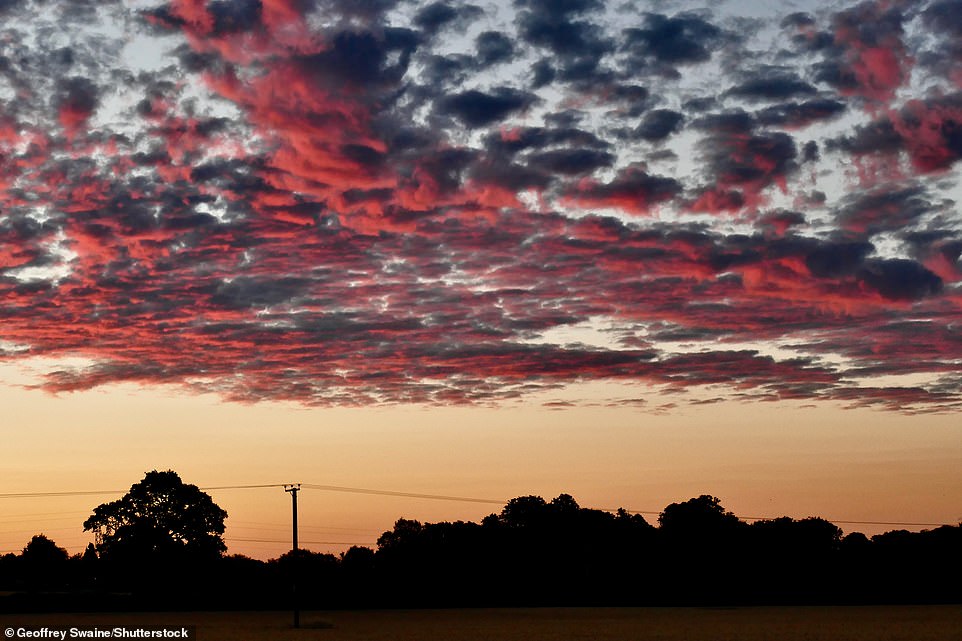 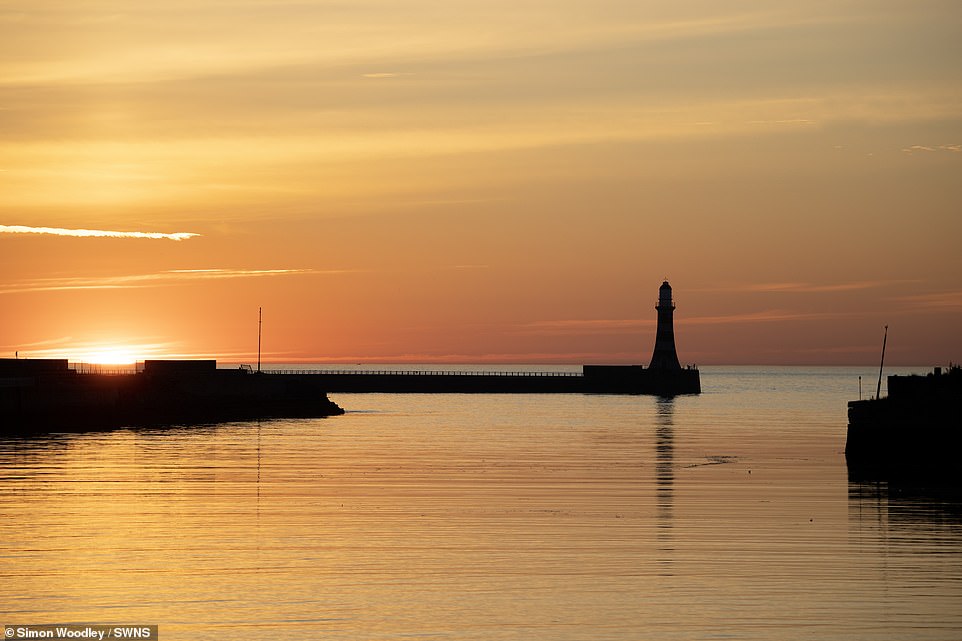 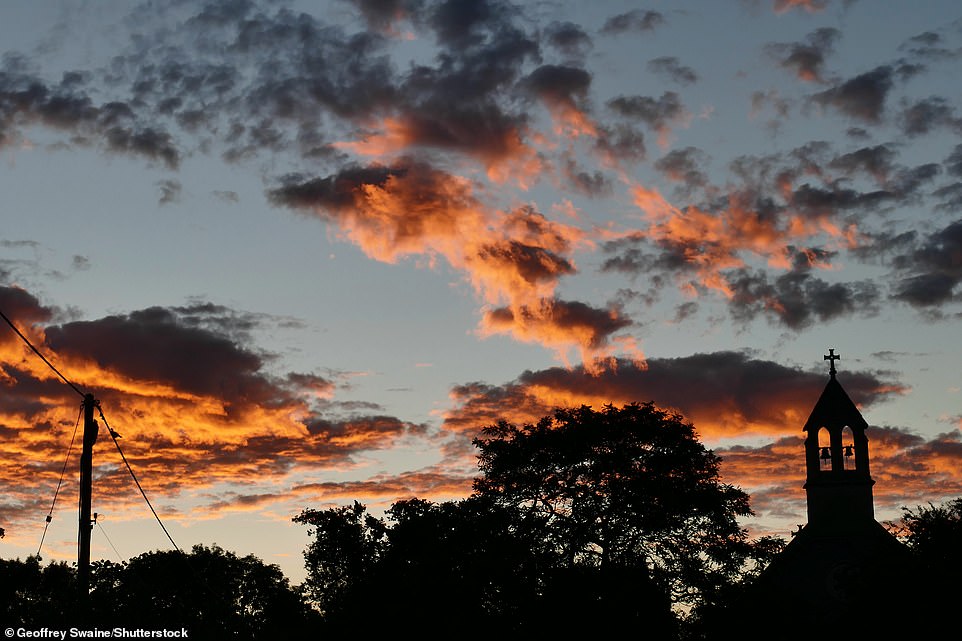 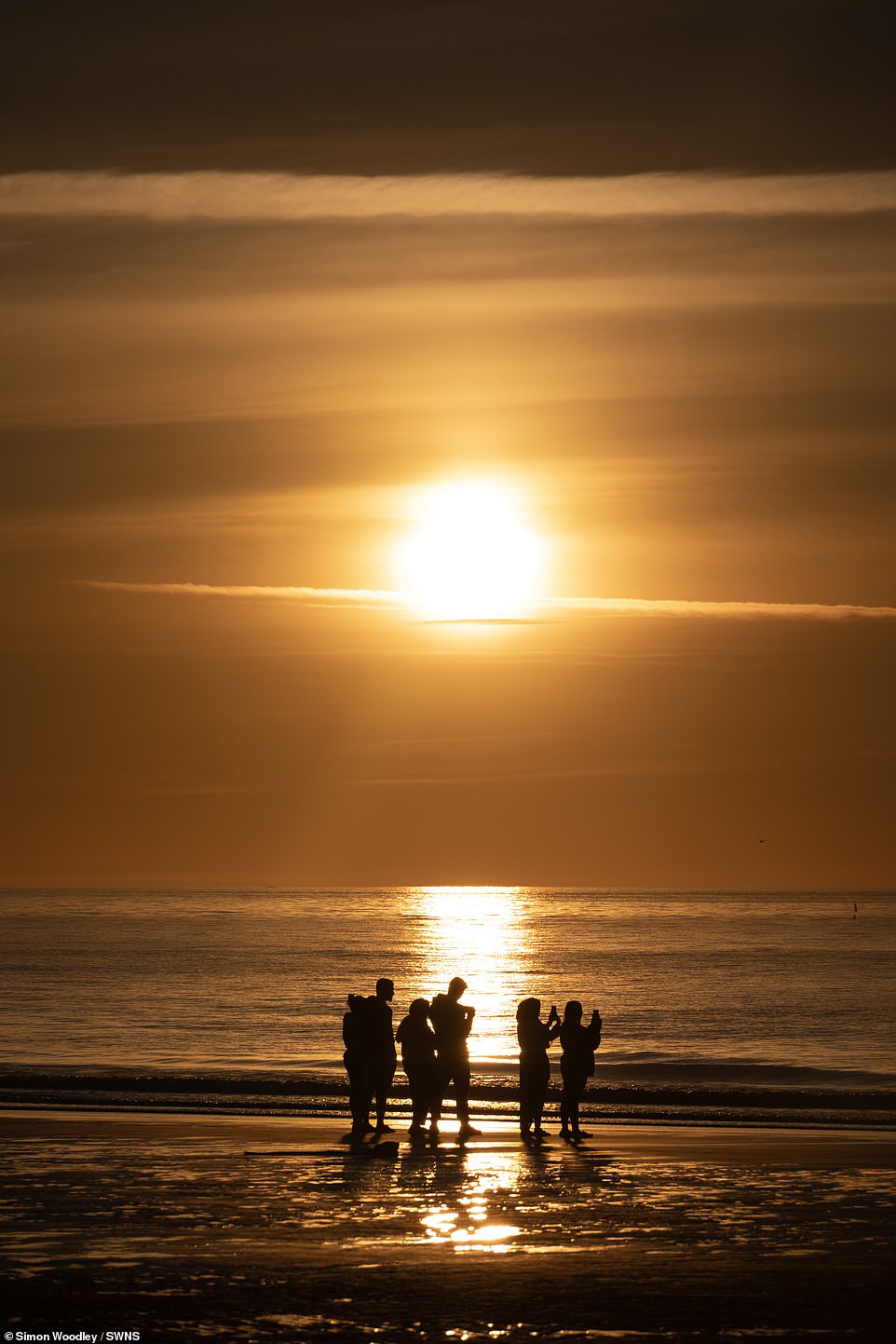 The sun rises at Roker beach in Sunderland this morning as early walkers, fishermen and sunrise watchers enjoy the cool air

‘In Scotland and Northern Ireland it will be somewhat hazy at times with thick cloud moving in from the north-west, possibly bringing some rain at times.

Boy, 16, dies after getting into difficulty while swimming in old quarry

A 16-year-old boy has died after getting into difficulty in the water at an abandoned quarry in Lancashire.

Officers from Lancashire Police were called by paramedics to East Quarry in Appley Bridge at around 9:40pm on Saturday.

The teenager was pronounced dead at the scene and his death is not being treated as suspicious, Lancashire Constabulary said.

The boy’s family have been informed, the force added.

In 2015, 13-year-old Miracle Godson – a promising young rugby player from Wigan – died after getting into difficulties in the quarry’s deep waters.

And in 1999, 17-year-old Craig Croston drowned at the site after also getting into trouble in the water.

A Lancashire Constabulary spokesman said: ‘Emergency services attended the scene and following a search the body of a 16-year-old boy was recovered from the water. He was sadly pronounced dead at the scene.’

‘But for most of us it will be a dry and sunny day, well into the high 20s from the morning, with central, southern and eastern parts of England to possibly see maximum highs of 33C.

‘So it’s very possible tomorrow will be the hottest day of the year so far, it will certainly be on par with the existing record, maybe more.

‘It will also be very warm overnight going into Tuesday, remaining in the low 20s in cities, so many may experience an uncomfortable night.’

Mr Dewhurst added: ‘Tuesday will see the risk of a few showers across the north of the UK and slightly lower temperatures of 19C to 25C. It will remain hot with sunny spells in the south with highs of 27C to 33C.

‘Wednesday, Thursday and Friday will see a mixture of sunny spells, but the risk of showers in the north too. Temperatures 20C to 23C in the north and 24C to 28C in the south.

‘Over the weekend, it looks set to be mainly dry and sunny and temperatures could rise back into the low to mid 30Cs.’

Some even predict the UK could reach a staggering 43C (109F) this weekend.

Met Office forecaster Steven Keates told The Sun: ‘We’re in for a real rollercoaster which may take people by surprise. (This) weekend we could have some really exceptional record-breaking heat and it will ramp up suddenly like someone has turned on the gas.

‘Some models from America indicate we could see 43C in East Anglia next Sunday, which would obliterate the current UK record.

‘At the moment we’ve got quite pleasant dry heat, but next weekend the dew point will rise and it will become very hot and sticky. The high humidity means temperatures won’t drop quickly at night.’

And BBC Weather presenter Simon King tweeted: ‘Some of the weather computer models we use are still coming up with temperatures in the mid-high 30’s on Sunday and Monday.

‘Still a way off but it has been too consistent to ignore. There’s ‘summer’ and then there’s ‘extreme heat’.’

A Level Three heat-health alert, labelled ‘heatwave action’, has been issued for this week by the UKHSA for the South East, East and London regions – highlighting the potential health impacts of the conditions.

It says: ‘Look out for others, especially older people, young children and babies and those with underlying health conditions. Close curtains on rooms that face the sun to keep indoor spaces cooler and remember it may be cooler outdoors than indoors.

‘Drink plenty of fluids and avoid excess alcohol, dress appropriately for the weather and slow down when it is hot.’

The alerts began at 9am this morning and will be in place until 9am this Friday as it stands.

A Level Two alert – labelled ‘alert and readiness’ has been issued for the South West, East Midlands, West Midlands, North West and Yorkshire and the Humber regions.

This states: ‘Hot weather can be dangerous, especially for the very young or very old or those with chronic disease.’

The extreme heat predicted for this week means that South West Water has called on customers to try to save five litres of water a day to maintain reservoir levels, admitting that pressure on supplies is building.

Lisa Gahan, the director responsible for water resources, said there had been no restrictions in the region since 1976 and ‘if we are careful we can have another year without any restrictions’.

Dr Agostinho Sousa, Head of Extreme Events and Health Protection at the UKHSA, said: ‘We want everyone to enjoy the hot weather when it arrives, but also to check in on their vulnerable family, friends and neighbours to make sure they are prepared for the warm conditions ahead.

‘High temperatures are predicted for a prolonged period, so make sure to follow our simple health advice to beat the heat, such as covering windows exposed to direct sunlight and making sure that fridges, freezers and fans are working properly.’

And Sam Hughes, National Water Safety Partner at the RNLI, urged Brits to stay safe at the coast, when they’re cooling off.

‘If you are planning on going to the beach we would encourage you to visit a lifeguarded beach and swim between the red and yellow flags.

‘If you get into trouble in the water, Float to Live: lean back, use your arms and legs to stay afloat. Control your breathing, then call for help or swim to safety. In a coastal emergency, call 999 or 112 for the Coastguard.’