The owners of a bulldog have been left heartbroken when it died after it was allegedly left in a glass conservatory by a £28-a-day dog sitter during this week’s record-breaking heatwave.

Bulldog Teddie had been left with the sitter in Barry, South Wales, by his owners Nikki and Glenn Morton on Sunday, July 17.

The couple, from Caerphilly, in South Wales, said they thought the 21-month-old would be safe with the dog-boarder, who they found recommended on the website Rover.

However, less than 24 hours after dropping him off at the carer Mrs Morton received a phone call to say: ‘Your dog is dead.’

Police and the dog-sitting company are investigating the tragedy after Mrs Morton, 49, alleged her pet was kept in a hot conservatory in the boarder’s. 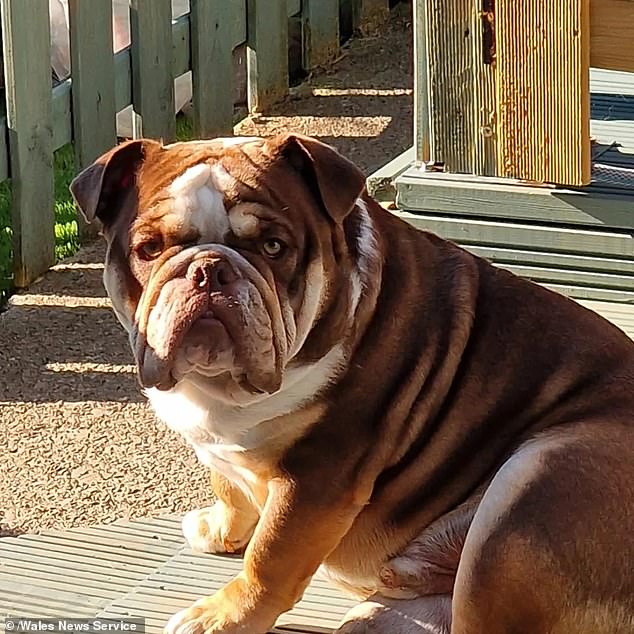 Bulldog Teddie was found dead on Monday, July 18, after allegedly being left overnight in a glass conservatory. Pictured is Teddie outside his family’s home

‘I am angry and absolutely heartbroken because it was so avoidable,’ she said.

‘The conservatory was boiling when we went there that day. It was 27C outside and hotter in there.’

The Mortons had booked Teddie in to stay there for a couple of nights so he could get used to it before they went on a two-week holiday to Jamaica later this year.

Mrs Morton found the sitter in Barry, 20 miles from her home in Caerphilly on Rover, a website that brokers pet services such as pet sitting, dog boarding and dog walking.

She said: ‘I searched on Google and Rover came up. It seemed really legit and we found a sitter who sounded like a really nice lady with five-star reviews and everyone raving about her.’

She said she was surprised to learn five other dogs were staying with the sitter at the same time. 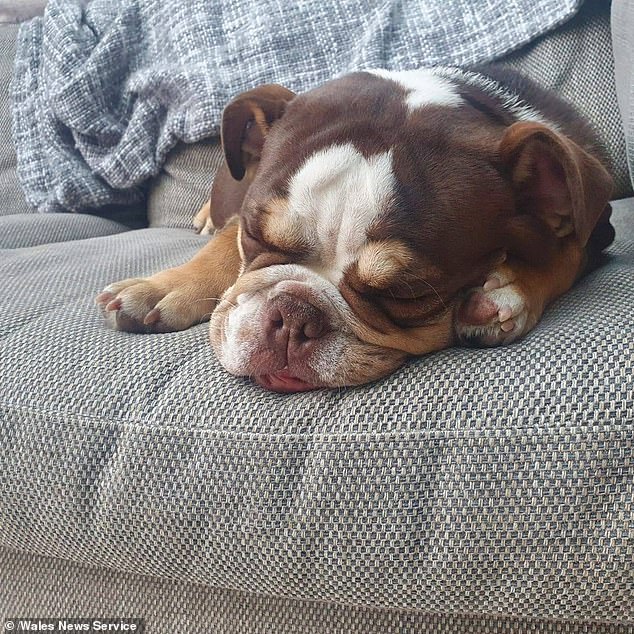 The 21-month-old dog was left overnight in the care of a £28-a-day dog sitter by his owners Nikki and Glenn Morton. Pictured is Teddie asleep on a sofa

Teddie was left in the home at around 6pm but the sitter then called her at 7.48am the next day and said: ‘The dog is dead.’

Mrs Morton said: ‘I asked where he’d been sleeping and she said: ‘Well, the conservatory.’

‘Why would you leave a dog in a glass box in extreme weather conditions? I was sobbing and had to just put the phone down.’

The Mortons went to collect her pet’s body that morning and saw the conservatory door was open.

She said: ‘My dog was dead on the floor and she had thrown a quilted blanket over him. He was in almost full rigor mortis. The smell was horrendous.

‘It’s a fully glass conservatory with no blinds. I’m hanging on to the thought that he didn’t suffer in the conservatory.

‘My house feels empty and my heart feels empty. Everyone in our street knew him. He couldn’t walk down the street without someone fussing him. He loved running around the garden chasing tennis balls. He loved life and he loved people.

‘The cat is wandering round the house looking for him because they were best mates. He was a huge, huge part of our life. And he was a baby – he had at least another 10 years in him.’

The local council’s licensing team told her the sitter does not hold a dog boarding licence. 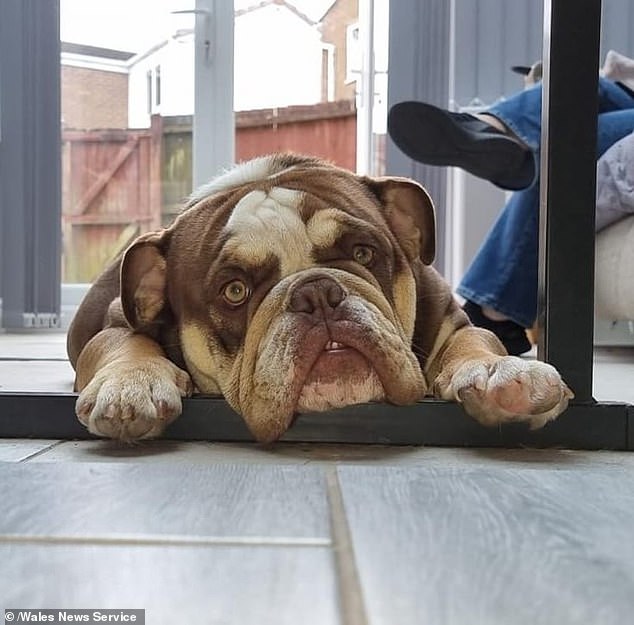 Nikki Morton said she found the dog sitter on the website Rover but later discovered they had  no licence. Pictured is Teddie before his tragic passing

A Vale of Glamorgan official said: ‘The licensing department recommends that only licensed dog boarders are used,’ the email read.

A Rover spokesman said: ‘At Rover most of us are pet parents ourselves and our hearts go out to Teddie’s family and all who loved him.

‘We are committed to supporting Teddie’s owner during this challenging time. Our 24/7 trust and safety team is currently investigating the situation.

‘We are removing the sitter from our platform, preventing them from offering further pet care services through Rover.

‘Pet safety and the wellbeing of our community is our top priority at Rover. During this unprecedented heatwave in the UK we are proactively providing safety information to members of our community to help protect pets.’

A South Wales Police spokeswoman said on Thursday: ‘We received a report concerning the death of a dog which happened on Monday, July 18. Inquiries are ongoing.’