Royal sources today soundly trashed claims that Camilla, the Duchess of Cornwall, joked to Prince Harry that it would be ‘funny’ if his unborn child with Meghan Markle had ‘ginger Afro hair’.

The incendiary claims were made in Tom Bower’s new no holds-barred book: Revenge: Meghan, Harry and the war between the Windsors.

Mr Bower alleged Camilla made the comments about Harry and Meghan’s unborn baby’s future hairstyle during a chat with Harry and his family about his relationship with the American actress.

But royal sources speaking to the MailOnline said ‘this suggestion is nonsense’. Clarence House has not commented.

The Sussexes would later claim to Oprah that a senior royal, who they refused to name, had also asked how ‘dark his skin might be when he’s born’ when discussing Archie. 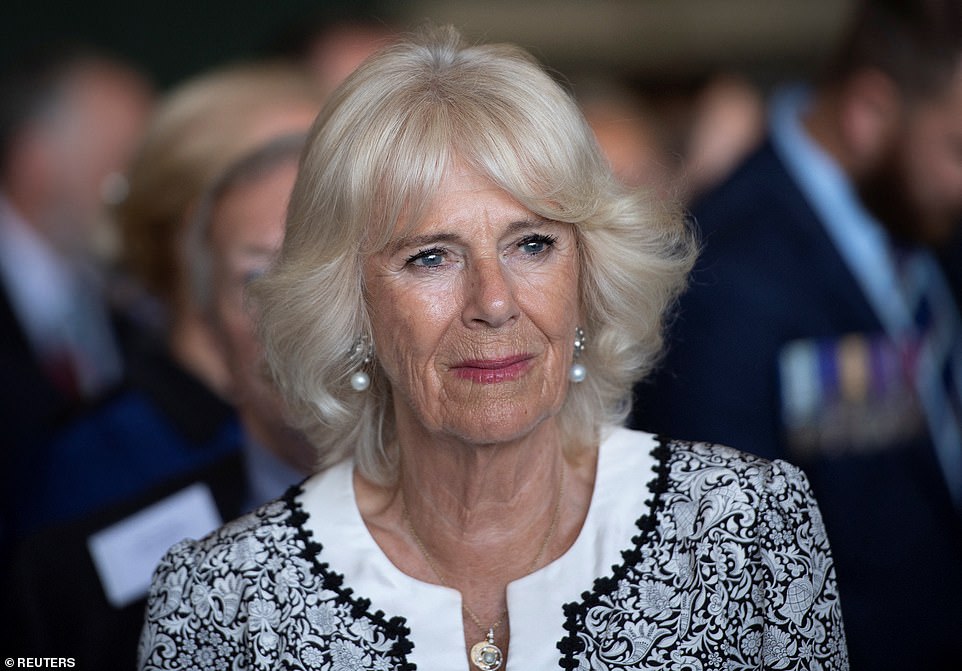 An award winning author has written of claims that Camilla, the Duchess of Cornwall, asked Prince Harry if his unborn mixed-race child would have a ‘ginger Afro’ when he grows up

Duke and Duchess of Sussex, Prince Harry and his wife Meghan hold their baby son Archie as they meet with Archbishop Desmond Tutu and his wife (unseen) at the Tutu Legacy Foundation in Cape Town on September 25, 2019

Presenter Ben Shephard asked how the story could be an unbiased account if the author had interviewed people who dislike the Duchess of Sussex.

Bower responded: ‘Because I sifted through, I never put in stuff that isn’t true and can’t be checked.’

The presenters said: ‘We should add that she has not commented on the claims in the book.’

Harry and Meghan, in an interview US chat show host with Oprah Winfrey, said a member of the Royal family asked how ‘dark’ the skin of their first born son Archie would be.

‘During those weeks, Harry met Charles and Camilla at Clarence House,’ said Bower, according to The Mirror.

Harry said he was told Meghan should continue with her acting career, and that Harry should not expect automatic police protection for his girlfriend.

Harry and Meghan announced their engagement the following year in November 2017, marrying at Windsor Castle in the spring of 2018. 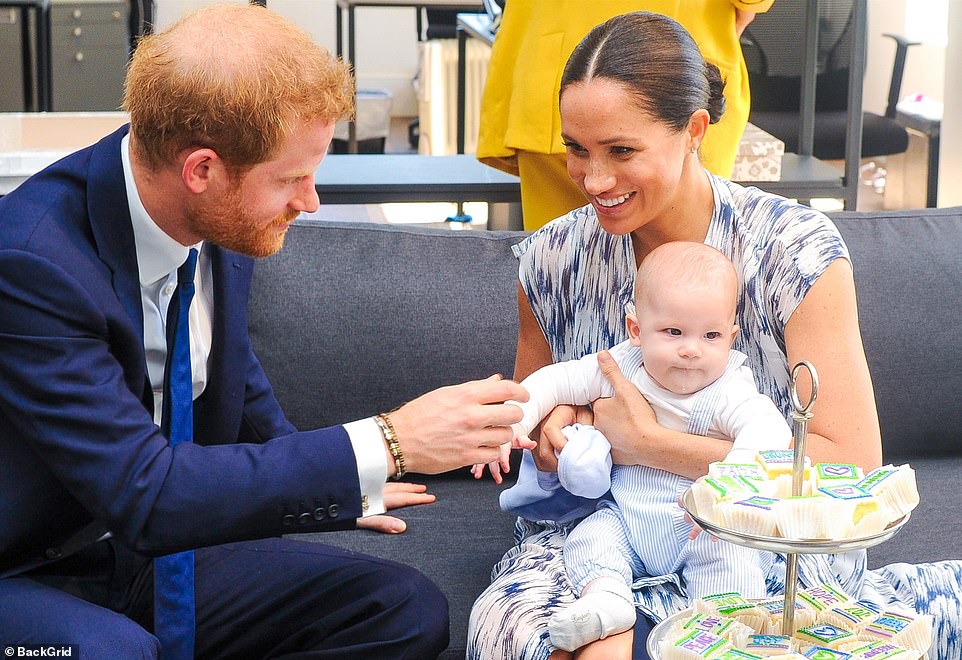 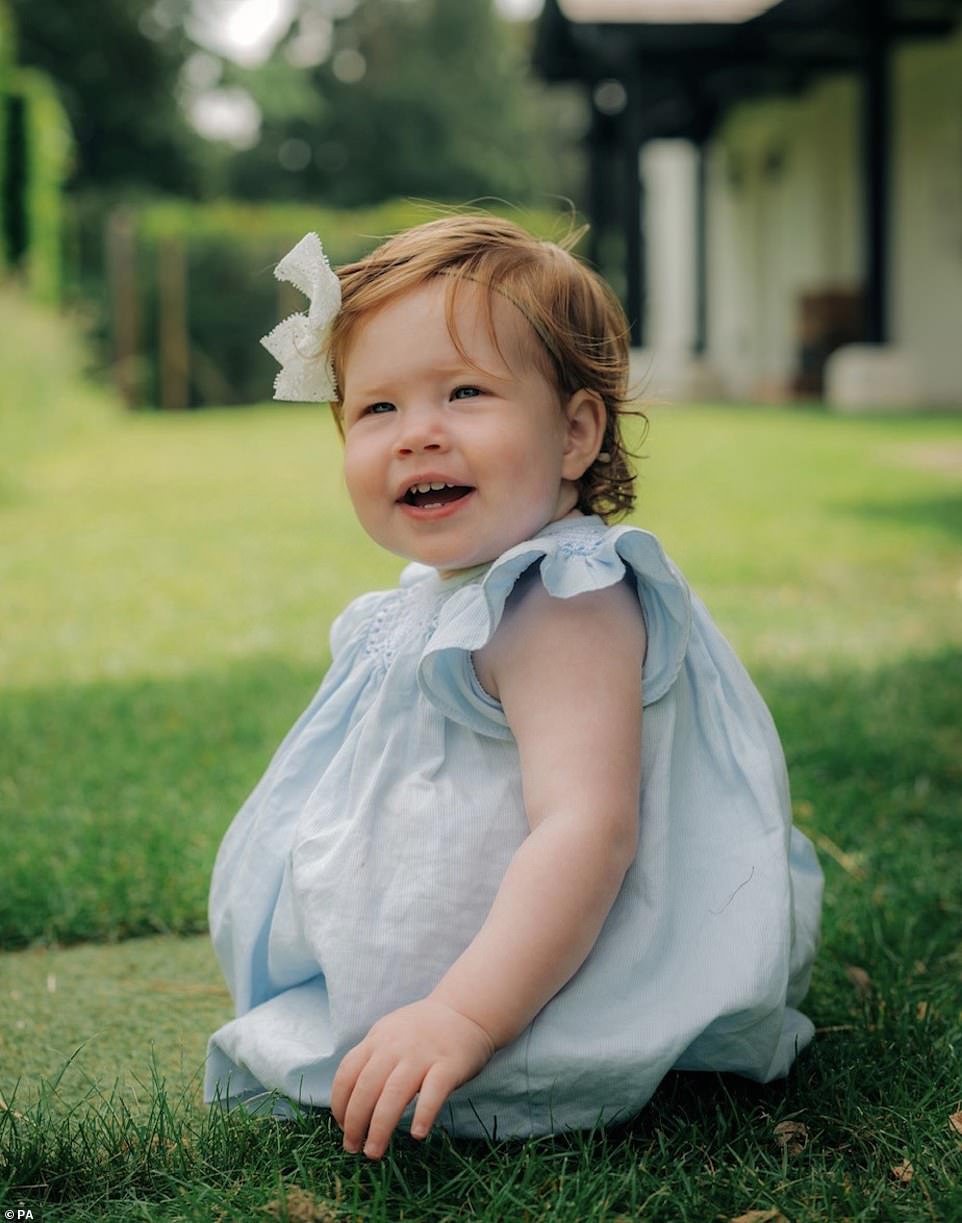 Lilibet Diana Mountbatten-Windsor the daughter of the Duke and Duchess of Sussex, after celebrating her first birthday, is pictured

But the couple would eventually quit royal life, taking a step back from royal duties and moving to California.

Another one of Mr Bower’s bombshell claims in the book is that the Queen told an aid she was glad Meghan was unable to attend the funeral of her husband Prince Phillip on April 17.

Bower also says he believes the Queen kicked Harry and Meghan off the balcony at the Platinum Jubilee celebration, hiding them from view of the crowd for fear of the couple taking too much media attention away from the event and adding that Prince Charles and Prince William had a say in the decision.

The investigative author said he had hoped to ‘diminish’ the importance of the royal couple with his book. 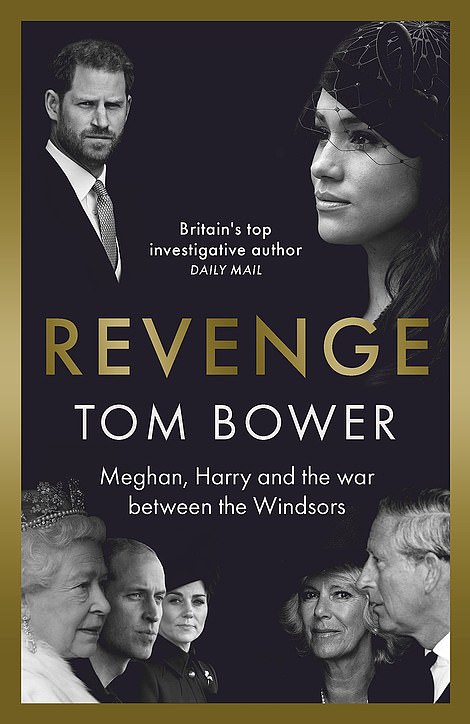 Revenge: Meghan, Harry and the war between the Windsors by author Tom Bower

It comes as it was also claimed in the bombshell biography that Kate Middleton ‘burst into tears’ after Meghan Markle ‘compared Princess Charlotte unfavourably to her best friend Jessica Mulroney’s daughter’ during a bridesmaid fitting ahead of the royal wedding.

Tom Bower claims the Duchess of Cambridge, 40, and Duchess of Sussex, 40, disagreed over the length of Princess Charlotte’s hemline and the fit of her dress, as well as whether the bridesmaids ‘should wear tights’ at the wedding.

He also claimed Meghan’s ‘insistence’ was ‘supported’ by her former BFF and mother of another bridesmaid Jessica Mulroney, adding: ‘Some would say that Meghan compared Ivy favourably against Charlotte.’

The alleged version of events are the latest in a long line of claims about the disagreement. Early reports in 2018 claimed Meghan who had made Kate cry during a row over bridesmaids’ dresses.

The Duchess of Sussex later disagreed in her bombshell Oprah Winfrey interview, claiming it was the other way around and adding: ‘She (Kate) was upset about something, but she owned it, and she apologised. And she brought me flowers’.

Meghan also said: ‘It wasn’t a confrontation, and I actually think it’s… I don’t think it’s fair to her to get into the details of that, because she apologised.

‘What was hard to get over was being blamed for something that not only I didn’t do but that happened to me.

‘And the people who were part of our wedding were going to our comms team and saying: ‘I know this didn’t happen. I don’t have to tell them what actually happened’.’

However in his book, Tom goes on to write unnamed sources told him the two continued to disagree.

Speaking on Good Morning Britain today, he acknowledged all his sources were people who don’t like Meghan, confessing: ‘She made it pretty clear to all her friends and people who work for her not to talk to me, so it was quite an uphill struggle but I got enough people to speak to me, more than enough, I got about 80 people.’

However he insisted that the biography was unbiased, adding: ‘I sifted through, I never put in stuff that isn’t true and can’t be checked.’ 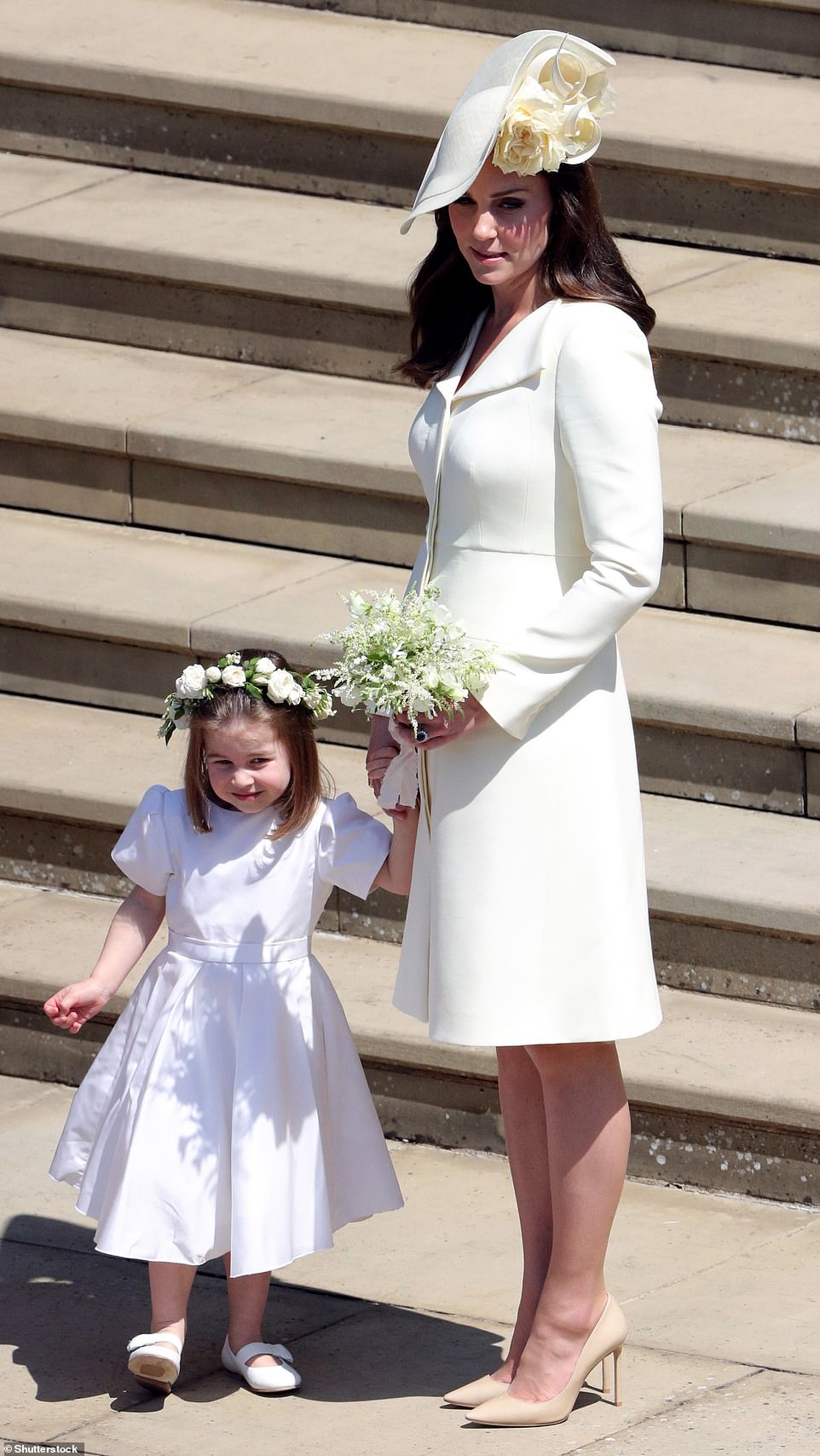 Kate Middleton ‘burst into tears’ during a bridesmaid fitting ahead of Prince Harry and Meghan Markle’s wedding after a series of disagreements with the Duchess of Sussex, a royal biographer has claimed 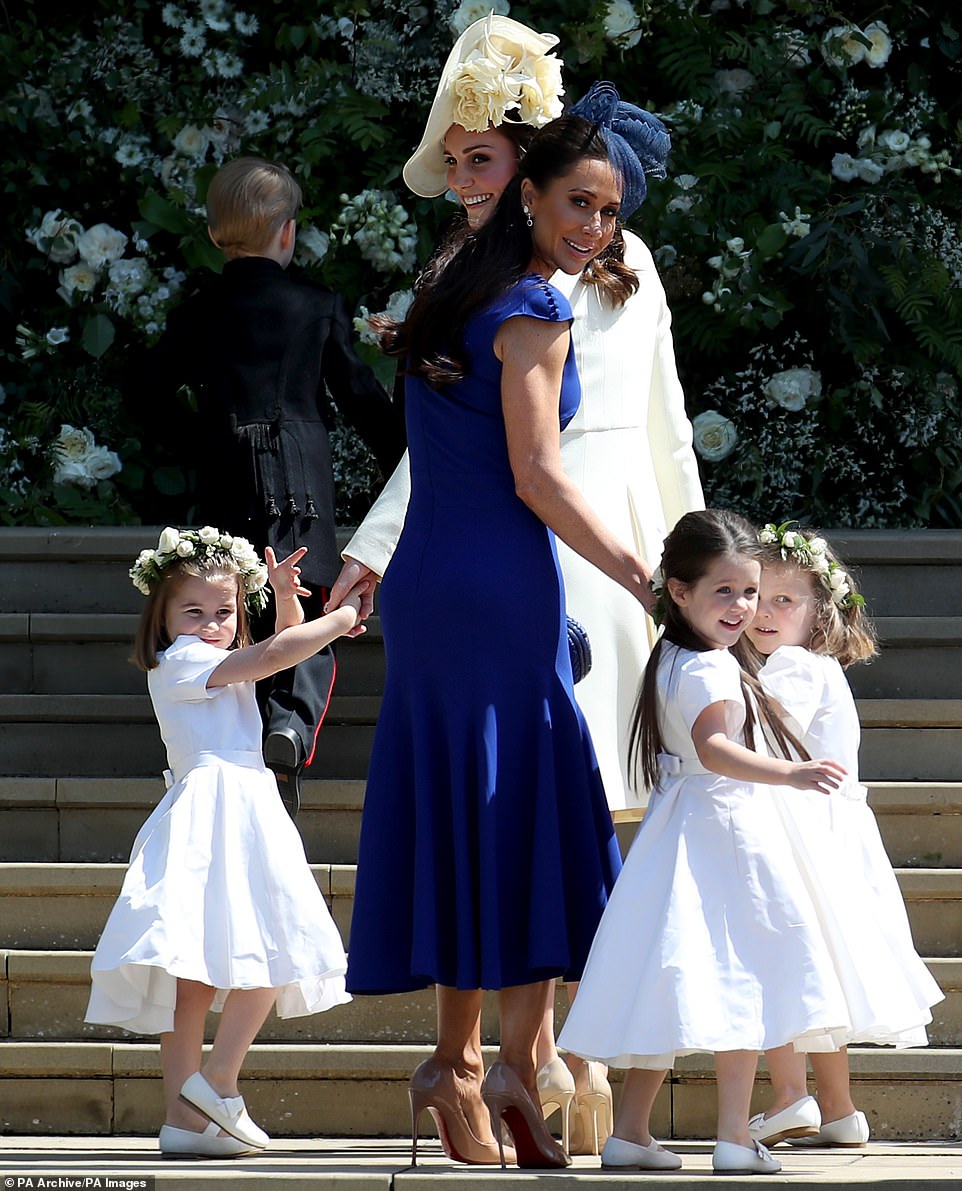 In the book, Bower also said Kate had been ‘tired’ following the birth of her son Prince Louis in the run-up to the wedding, adding she was ‘irritated by [claims] of Meghan bullying her staff.’

He wrote that one staff member said the Duchess of Sussex showed ‘little sympathy for those outside her circle.’

Writing in the biography, Tom Bower said the Duchess of Cambridge was ‘too fatigued to cope’ with a disagreement over whether bridesmaids should wear tights, however ultimately felt they should in order to follow protocol.

However he claimed: ‘Meghan’s insistence was supported by Jessica, the mother of Ivy.’

The disagreement was then followed by a second argument ‘about the length of Charlotte’s hem – Kate felt it was too short and anyway did not fit.’

However Bower claims the Duchess of Sussex ‘wouldn’t compromise’.

Bridesmaid dress-gate! How reports of Kate and Meghan arguing ahead of wedding unfolded

The bridesmaids, including Jessica Mulroney’s daughter Ivy and Princess Charlotte, have bare legs

November 2018 – The Telegraph’s royal editor Camilla Tominey wrote she had ‘spoken to two separate sources who claim Kate was left in tears following a bridesmaids dress fitting for Princess Charlotte’.

March 2021 – Meghan confirms there was a disagreement in her bombshell Oprah Winfrey interview but says the Duchess of Cambridge actually made her cry.

The infamous row with Prince William’s wife made headlines around the world after a supposed falling out over dresses for the flower girls.

Pictures from the wedding at St George’s Chapel, Windsor, appear to show the six bridesmaids with bare legs, while photographs from Prince William and Kate’s wedding in April 2011 show bridesmaids wearing tights.

It was claimed in November 2018 that Meghan had reduced Kate to tears over Princess Charlotte’s bridesmaid’s dress.

The Daily Telegraph reported that two sources said the Duchess of Cambridge was crying after a dress fitting with Charlotte.

‘Kate had only just given birth to Prince Louis and was feeling quite emotional,’ a source claimed.

However Meghan would later claim in her interview with Oprah Winfrey that the Duchess of Cambridge made her cry.

Oprah asked Meghan: ‘Was there a situation where she (Kate) might have cried? Or she could have cried?’

But the Duchess of Sussex replied: ‘No, no. The reverse happened.

‘And I don’t say that to be disparaging to anyone, because it was a really hard week of the wedding.

‘And she was upset about something, but she owned it, and she apologised.

‘And she brought me flowers and a note, apologising. And she did what I would do if I knew that I hurt someone, right, to just take accountability for it.’

Meghan added that it was ‘shocking’ that the ‘reverse of that would be out in the world’.

She continued: ‘A few days before the wedding, she was upset about something pertaining – yes, the issue was correct – about flower girl dresses, and it made me cry, and it really hurt my feelings.

‘And I thought, in the context of everything else that was going on in those days leading to the wedding, that it didn’t make sense to not be just doing whatever everyone else was doing, which was trying to be supportive, knowing what was going on with my dad and whatnot.’

Tom Bower claims the Duchess of Cambridge and Duchess of Sussex disagreed over the length of Princess Charlotte’s hemline and the fit of her dress, as well as whether the bridesmaids ‘should wear tights’ at the wedding 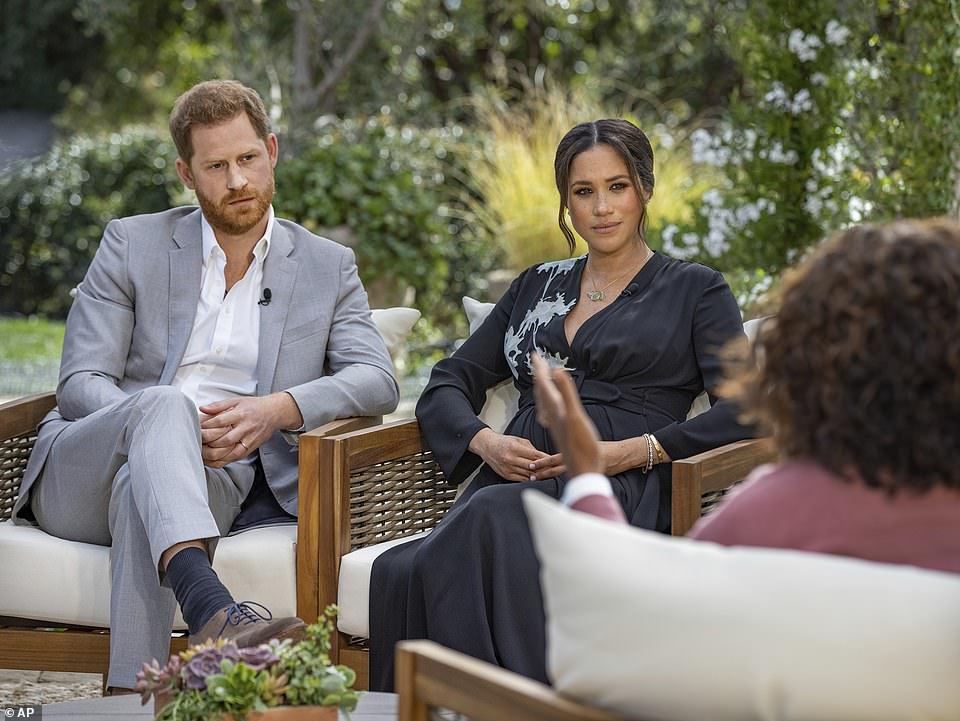 Meghan also said: ‘It wasn’t a confrontation, and I actually think it’s… I don’t think it’s fair to her to get into the details of that, because she apologised.

‘What was hard to get over was being blamed for something that not only I didn’t do but that happened to me.

‘And the people who were part of our wedding were going to our comms team and saying: ‘I know this didn’t happen. I don’t have to tell them what actually happened’.’

Meghan also said reports she had reduced the Duchess of Cambridge to tears were a ‘turning point.

The Duchess said ‘everyone in the institution knew that wasn’t true’ and she hoped Kate ‘would have wanted that to be corrected’, adding ‘she is a good person’.

Katie noted how you ‘never hear’ about the Duchess falling out with anyone because she is ‘very careful with how she treats others.’

Speaking to OK! magazine, Katie explained: ‘Kate has never wanted any suggestion of a rift with Meghan to come out in the press, so for this story to be circulating is very hard.’

Katie added there are ‘different versions’ of the story and claimed that Prince Harry and Meghan know Kate is ‘not in a position to respond’.

‘From what I hear, there are different versions of the bridesmaid story, not just the one Meghan discussed,’ the royal expert told the publication.

‘Kate felt it was all sorted, so to have it brought up again was mortifying. Kate is not in a position to respond and Meghan and Harry know that.

The royal expert went on to claim that Kate has been left ‘saddened, disappointed and hurt’ in the wake of Meghan Markle and Prince Harry’s tell-all interview with Oprah Winfrey.