Cardi B stole the show at the Wireless Festival in Birmingham on Saturday evening as the singer pulled out all the stops with her sheer mesh outfit.

The hitmaker put on a sizzling display in a sheer mesh sequinned stocking with nipple pasties as she took to the stage to put on another show-stopping performance.

It comes after Cardi was forced to deny getting into a fight at her Wireless show in London the previous evening, after footage emerged appearing to show her swinging the microphone at a fan. 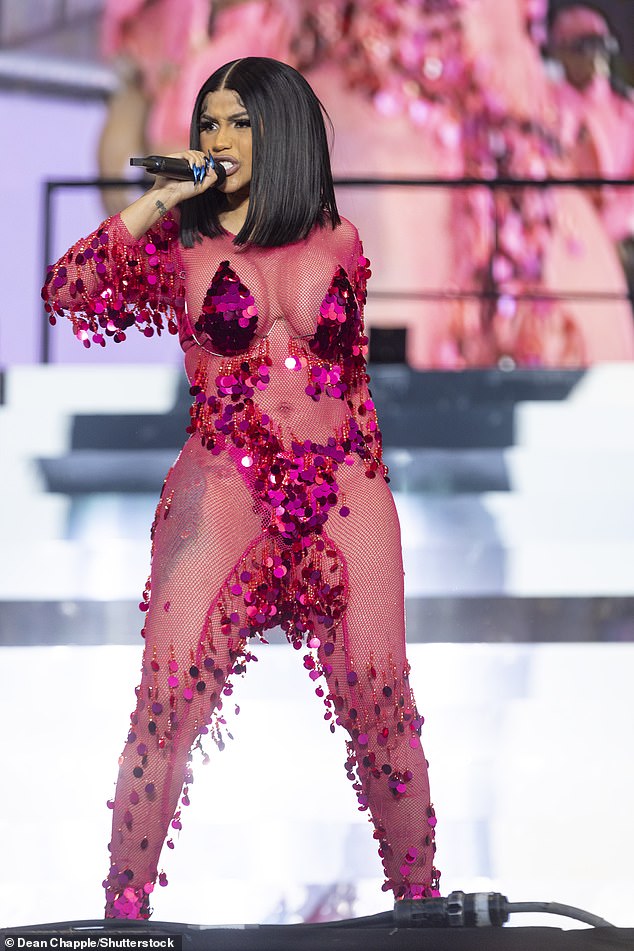 Sensational: Cardi B stole the show at the Wireless Festival in Birmingham on Saturday evening as the singer pulled out all the stops with her sheer mesh outfit

A video from a different angle cleared the situation up as it showed the fan grabbing the microphone from her, so the WAP rapper snatched it back.

Offering some support for her bust, the American superstar also donned a wire that was places between her cleavage on order to keep her ample assets in position.

Cardi’s racy red ensemble just about covered her modesty as the carefully placed sequins protected her from suffering a wardrobe malfunction.

Wowing in the daring garment was almost completely see-through, she also decided to go shoeless with the ensemble as she stormed the stage during a stellar set. 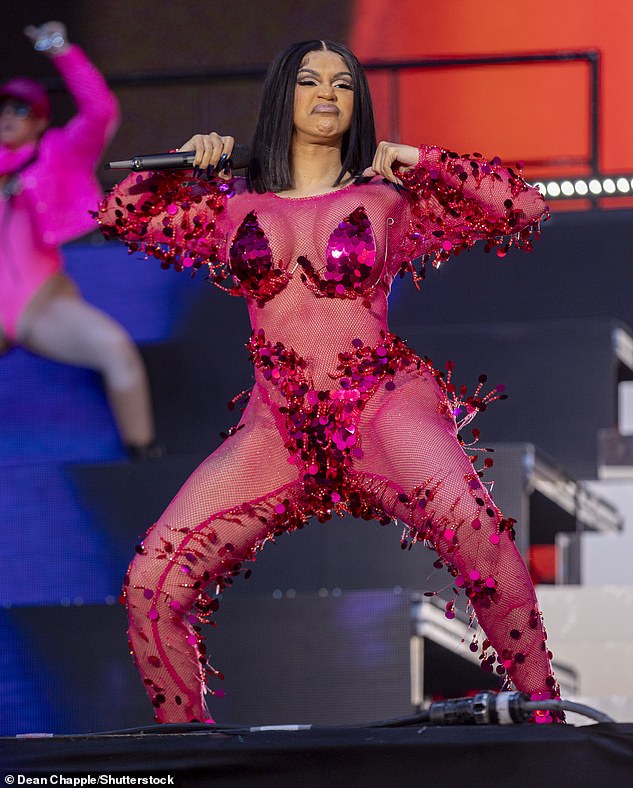 Revealing: The hitmaker put on a sizzling display in a sheer mesh sequinned stocking with nipple pasties as she took to the stage to put on another show-stopping performance 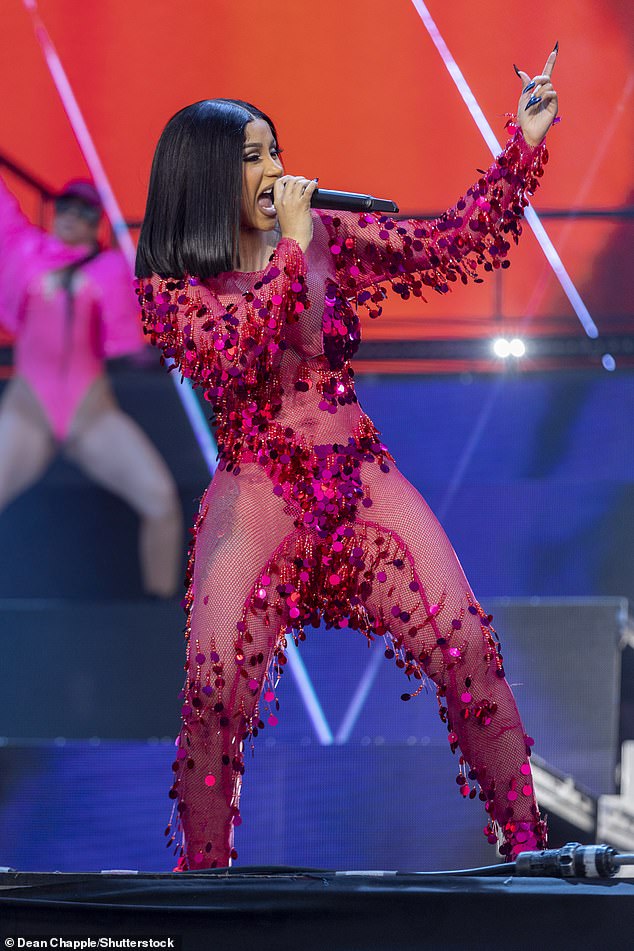 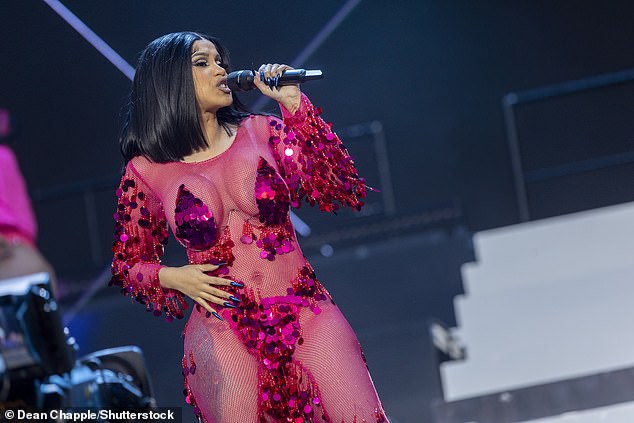 The sheer ensemble clung to her incredible curves as the bodysuit’s perfectly placed embellishment maintained her decency.

Her brunette bob was styled in a straight hairdo and she enhanced her flawless complexion with full coverage make-up.

The outfit’s metallic embellishments glistened under the stage lights a she showed off an impressive range of dance moves.

The Grammy winner twerked up a storm on stage before strutting from side to side as she whipped the audience into a frenzy. 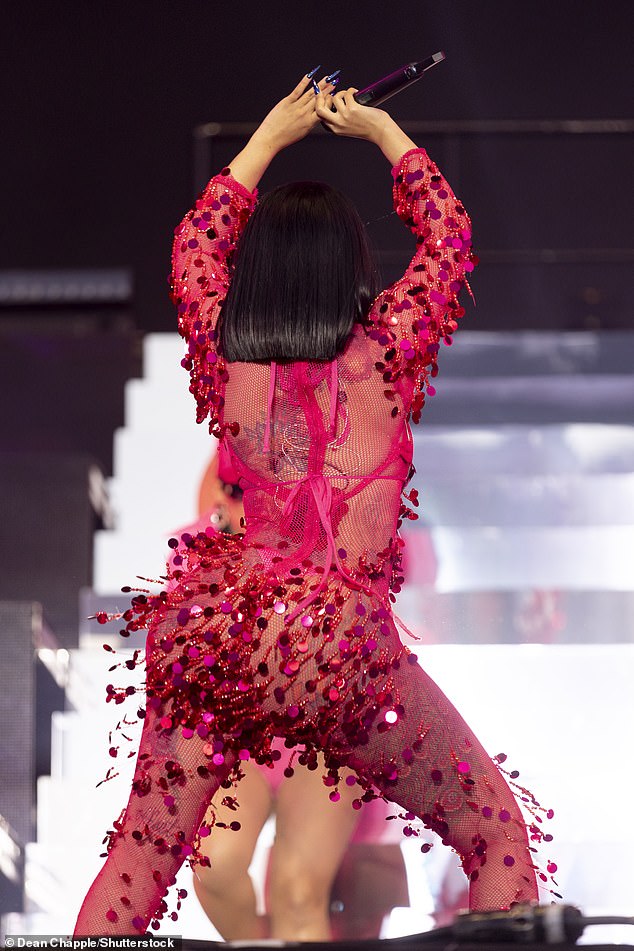 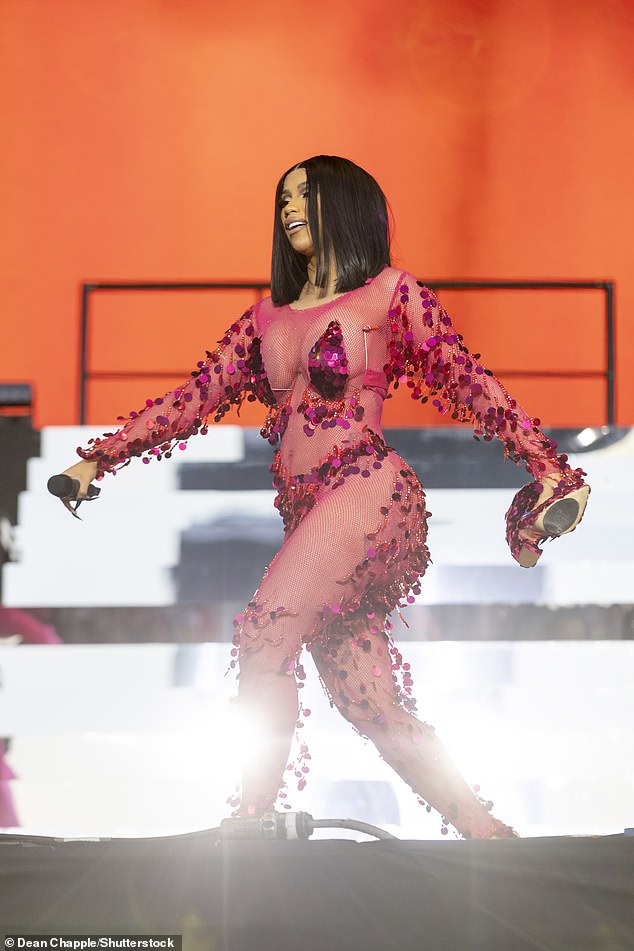 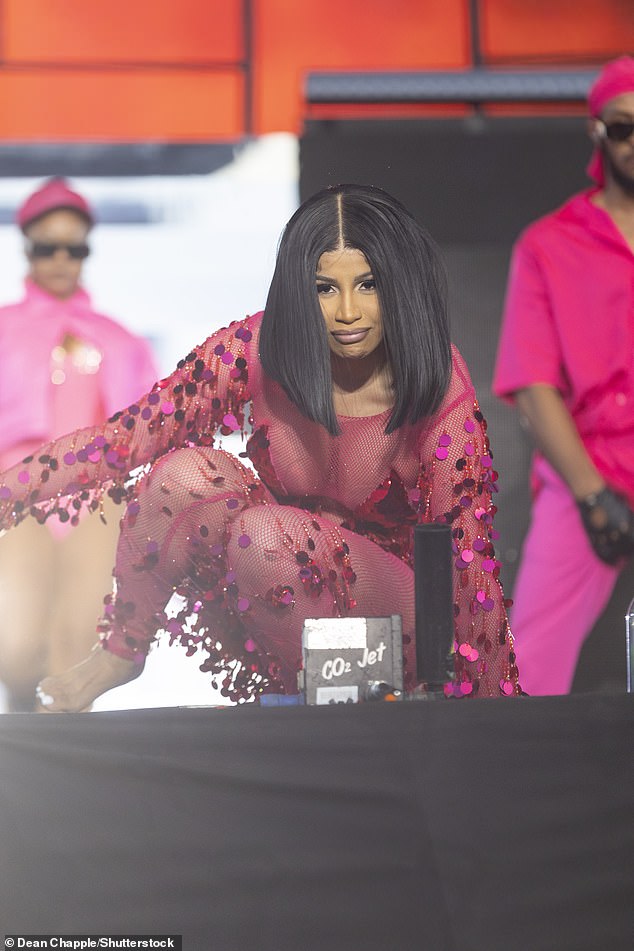 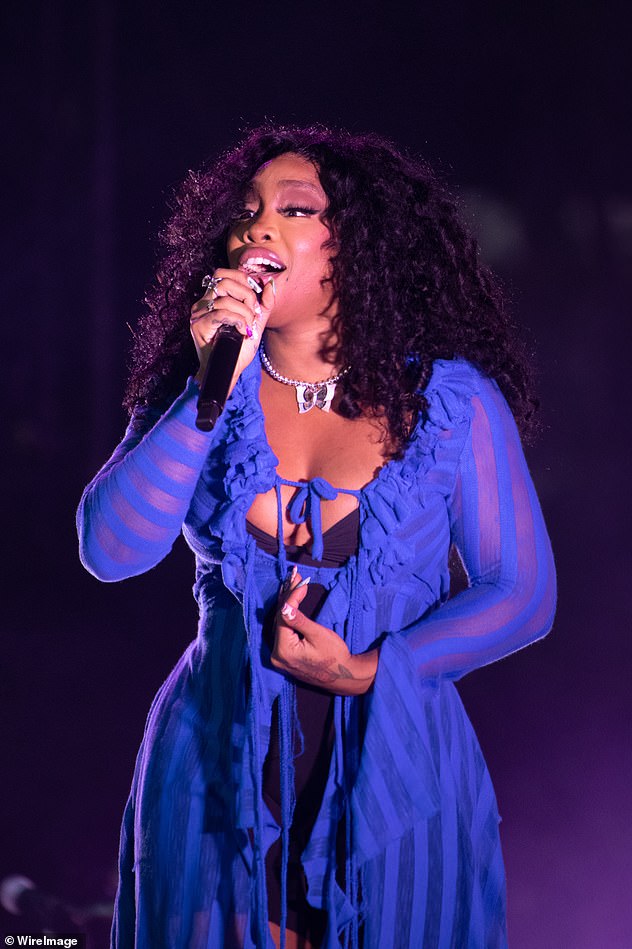 Headline: SZA also wowed in an electric blue mesh ensemble on Saturday as she put on a sensational headline performance at Wireless Festival in Finsbury Park, London 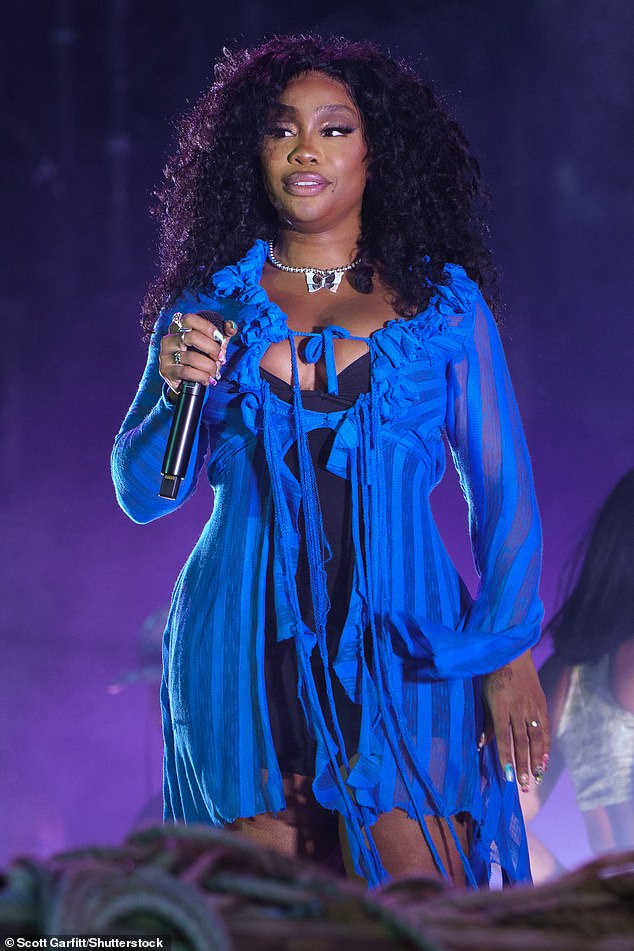 Wow! The distressed mesh piece was layered over a figure-hugging black dress, with a plunging neckline as she displayed her physique in the number

Simger SZA also took the stage by storm on the night.

The rapper, 31, donned an electric blue mesh robe for the appearance with a ruffled neckline, string tie bust and flared sleeve.

The piece was layered over a figure-hugging black dress, with a plunging neckline as she displayed her physique in the number.

Her dark locks were left to fall freely in a naturally voluminous ringlet curl, as the star opted for a glamorous palette of makeup, which included a smokey winged eye.

The Missouri native added a pair of heavy duty brown boots to complete the ensemble. 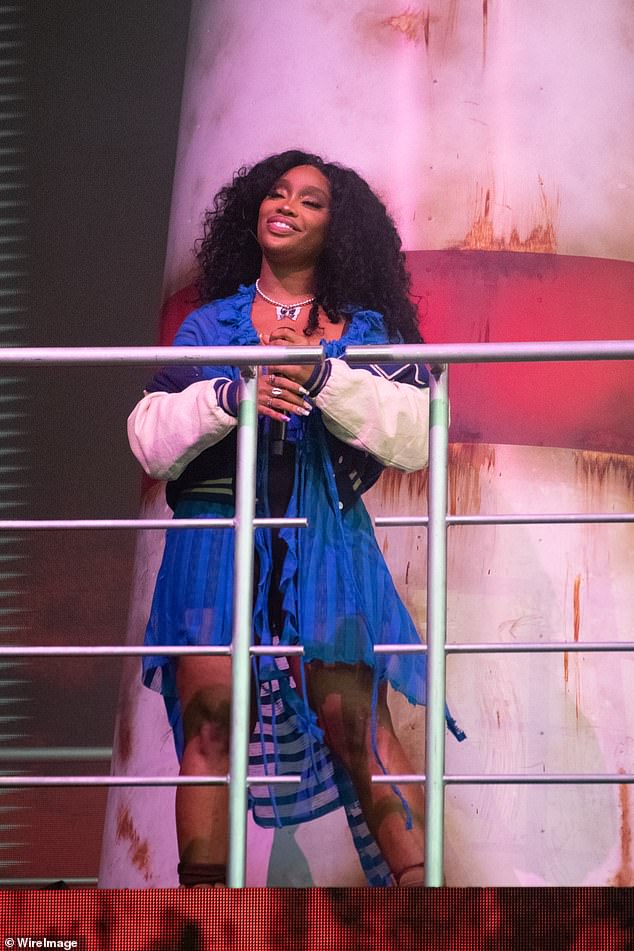 Natural: Her dark locks were left to fall freely in a naturally voluminous ringlet curl

Chris Brown also put on a stellar performance as he banged out a a slew of his hits on the night.

The American rapper, 33, donned a smart casual look as he donned a beige shirt and olive trousers and wore one of his signature baseball hats as he delighted fans.

Concert goers were said to be delighted with his performance at the first instalment of Wireless Festival at Crystal Palace last week as he showed he is a force to be reckoned with.

His set was met with thunderous praise after he performed old favourites including Yeah 3X and Beautiful People. 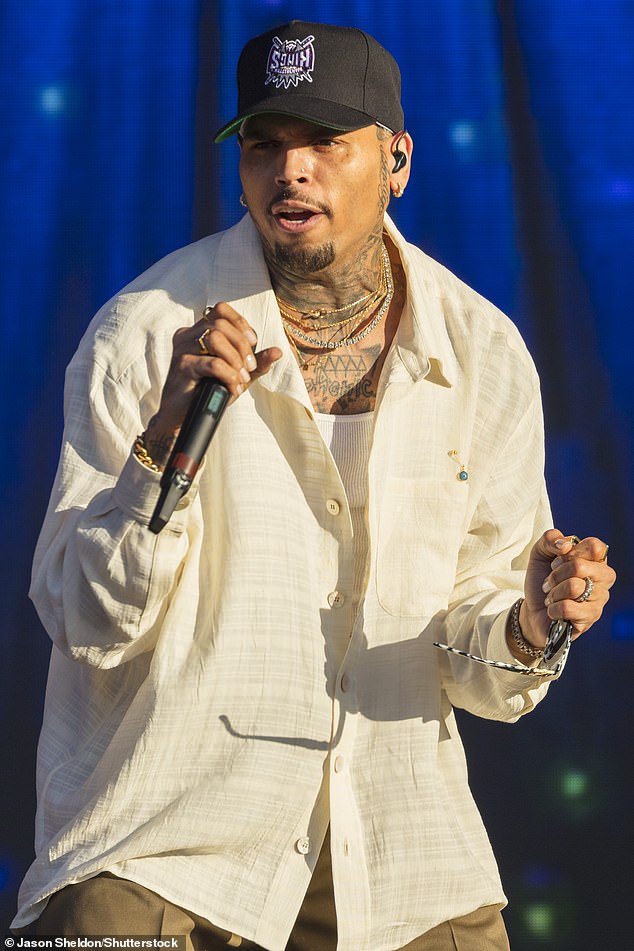 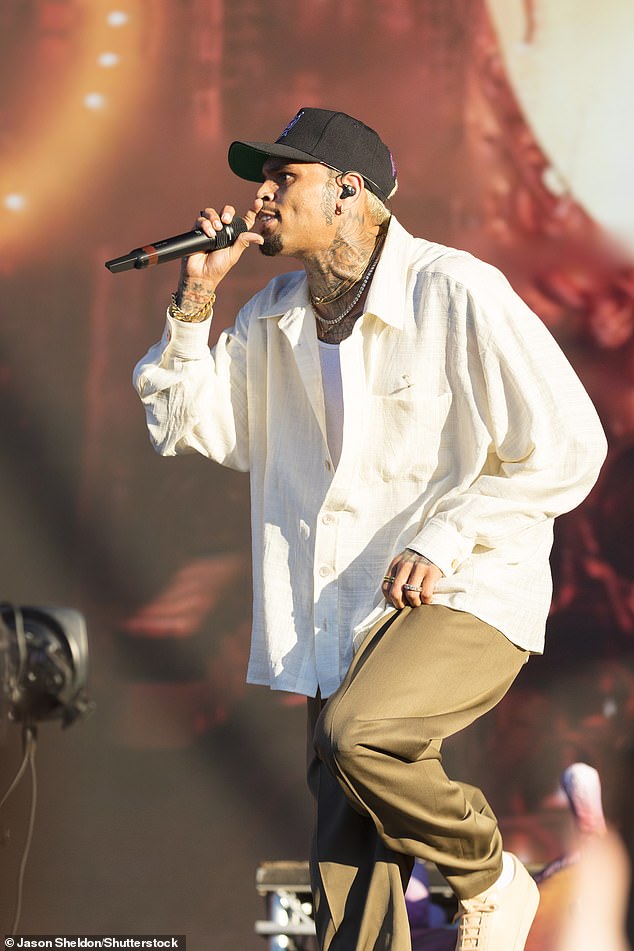 In attendance to see some of her favourite acts was model Jourdan Dunn.

The Victoria’s Secret Angel, 31, showed off her edgy sense of style as she wore a pair of futuristic style sunglasses. 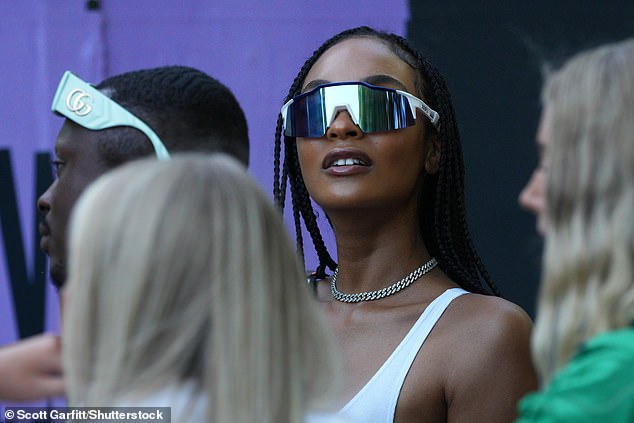 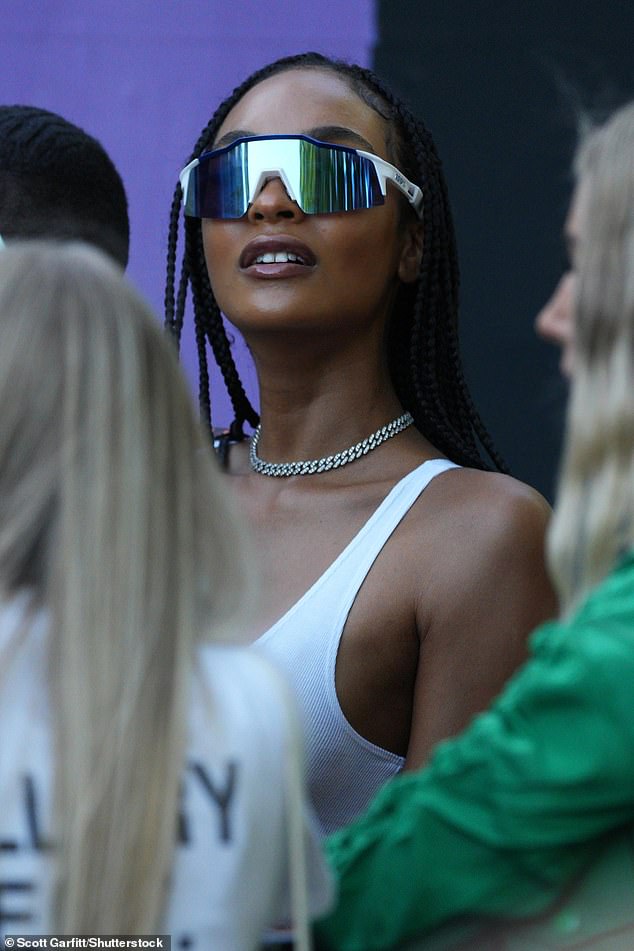 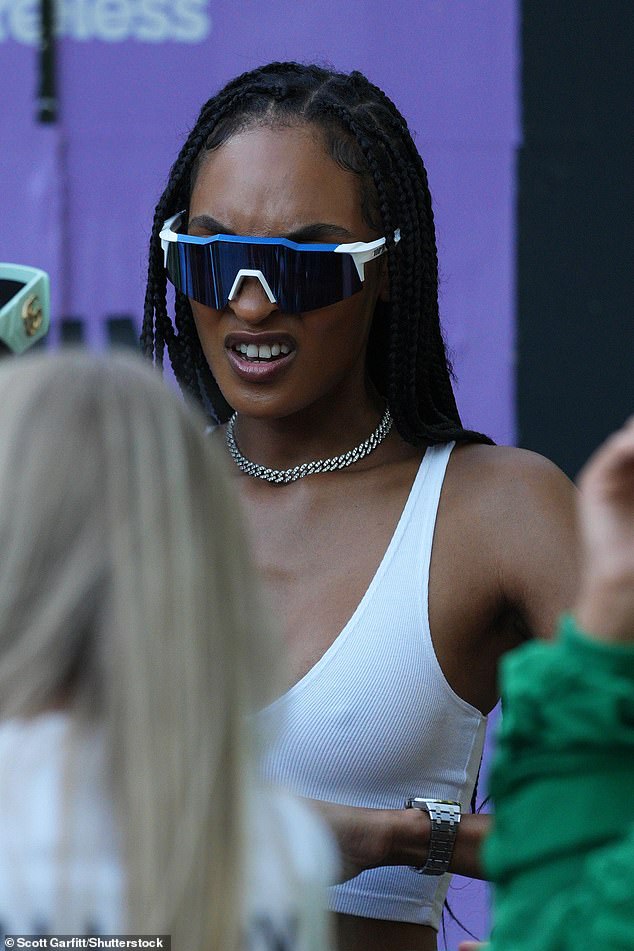 Saturday night’s concert comes after Cardi B was forced to deny getting into a fight with the audience on Friday as a video began to circulate Twitter, seemingly showing her hitting a fan with her microphone.

But clearing things up, the rapper tweeted: ‘It wasn’t NO FIGHT!’, as videos from other angles showed that she was simply caught up within the crowd.

And it came as the 29-year-old also delivered a jaw dropping performing alongside Megan Thee Stallion, with the pair certainly sending pulses racing as they put on an X-rated show – bending over one another on stage.

Cardi donned a bejewelled catsuit for the performance as she belted out a number of her well-known hits for the thousands of fans in attendance, making even more waves with the dance-moves she displayed with Megan.

In a video posted to Twitter by a fan in the crowd at the festival, Cardi bent over to the front of the crowd, before swinging her microphone in the air and seemingly hitting down.

She stayed down low for a few seconds, as her arms could be seen swinging up and down before she appeared to wrestle, before the lights went down on the stage.

The fan captioned the video: ‘Cardi B fights fan on stage at Wireless Festival’.

But hitting back to clear her name, Cardi explained that it wasn’t a fight, as other videos began to pop up – showing the moment from different angles as she simply got caught up in the audience.

‘It wasn’t NO FIGHT’: But hitting back to clear her name, Cardi explained that it wasn’t a fight via her own Twitter

MailOnline have contacted representatives for Cardi B and Wireless Festival for comment.

The superstar made her grand entrance down white steps as she was guided by two of her back up dancers before six others joined the stage.

The performance also included impressive pyrotechnics and fireworks making it a show to remember. 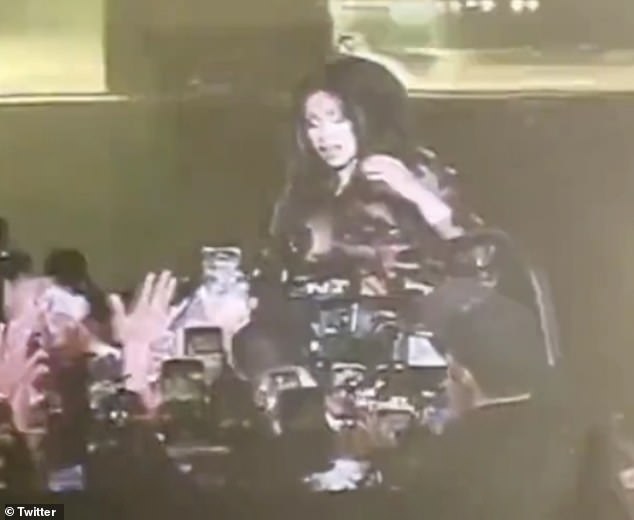 Brawl? Cardi B, 29, was forced to deny fighting with the audience during her performance at Wireless Festival on Friday – after a video surfaced which appeared to show her hit a fan with a microphone