She’s known for her lavish lifestyle and love of designer goods.

And Cardi B treated herself to some retail therapy on Friday, as she headed to Gucci’s Fifth Avenue store in New York.

Walking down Millionaire’s Row, the singer, 29, turned heads as she rocked a pink hot pants and purple crop top while bringing attention to her impressive abs. 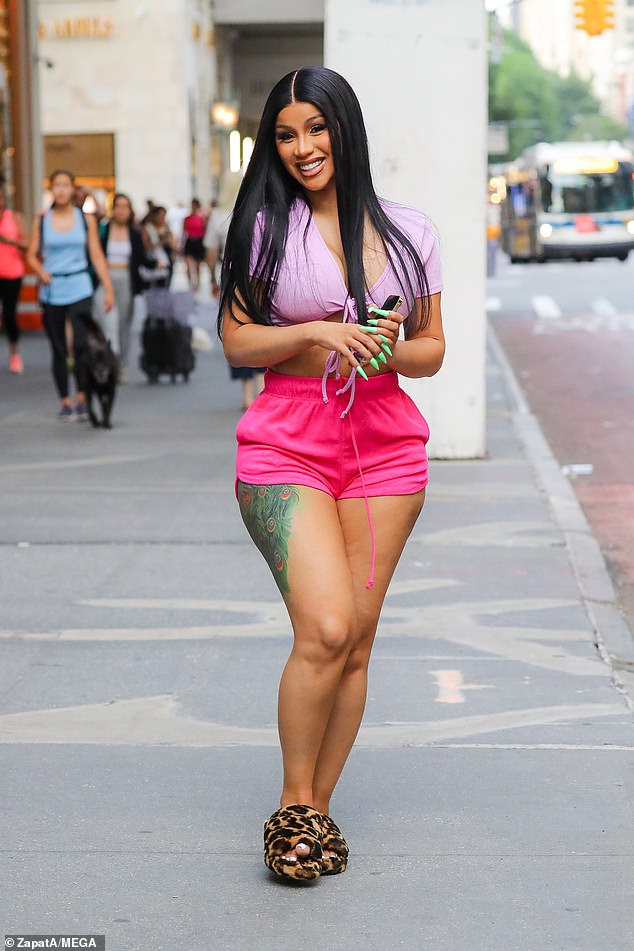 All smiles: Cardi B turned heads as she rocked a pink hot pants and crop top as she treated herself to some retail therapy on Friday, heading to Gucci’s Fifth Avenue store in New York

The former stripper looked in a playful mood as she pulled several funny faces, while showing off some of her stage moves.

Stepping out in a pair of fluffy double strap animal print slippers, the hitmaker appeared to form a little twerk as she strolled down the street,

Looking as glam as ever, Cardi rocked picture-perfect makeup, with her tresses styled sleek and straight with a centre parting. 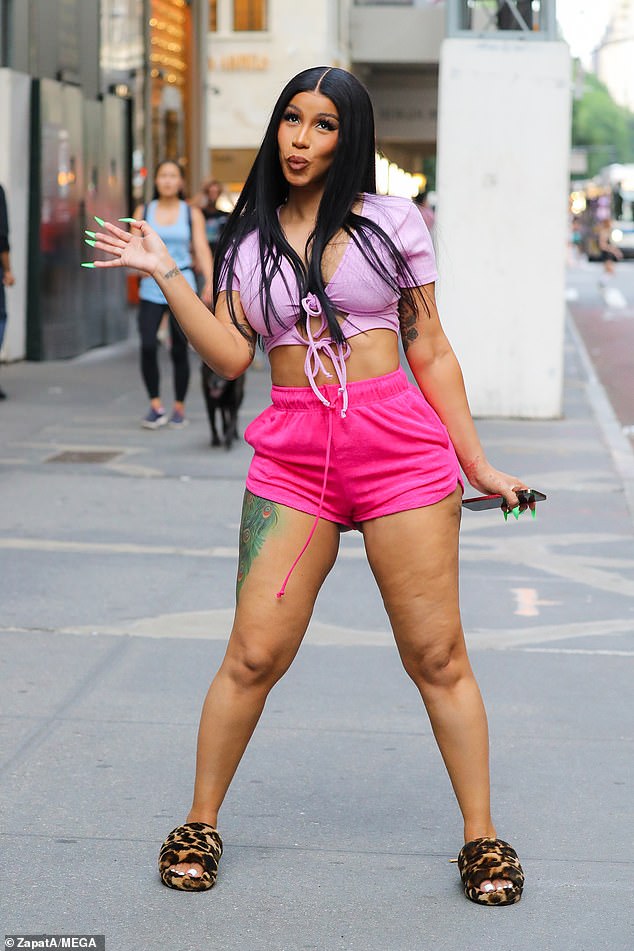 On form: The former stripper appeared in a playful mood as she pulled several funny faces 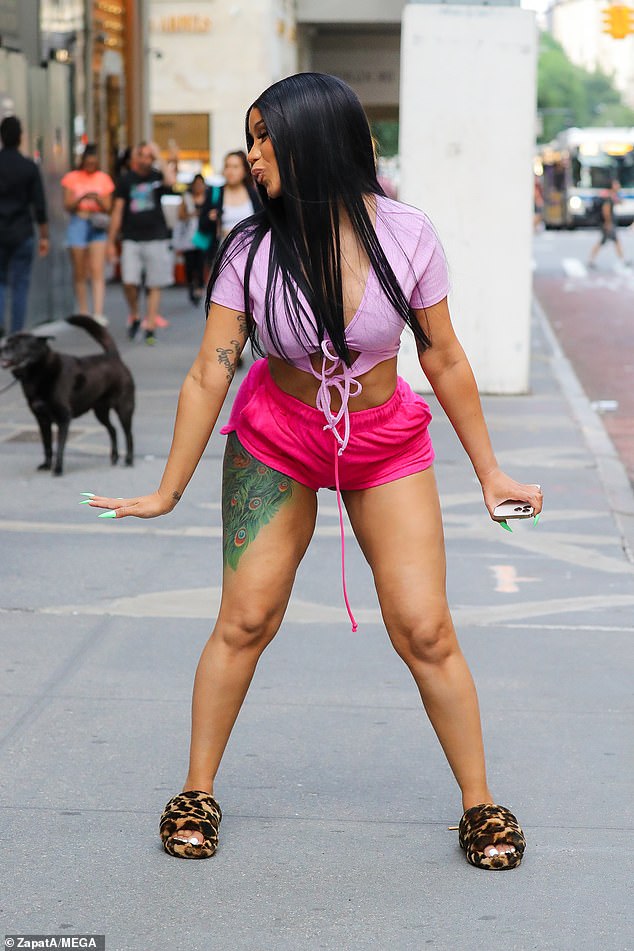 Work it: Looking as glam as ever, Cardi B rocked picture-perfect makeup, with her tresses styled sleek and straight with a centre parting.

The outing comes after the New York city rapper released her first solo single in over a year two days ago.

This is the Cardi’s first new song since Up debuted at number two on the Billboard Hot 100 chart in February 2021. It would eventually hit the number one spot on the chart after her riveting performance at the 63rd Grammy Awards five weeks later. 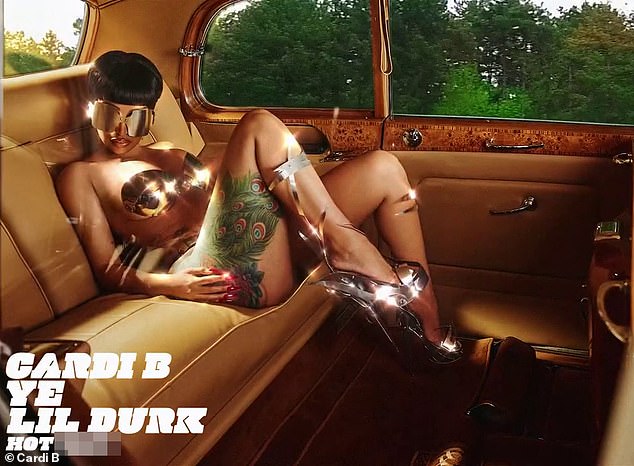 In full-on Cardi tradition, the hip hop superstar hit hard on the lyrical front, to match the driving force of the song.

Lead by a constant bass drum, the Bodak Yellow star jumped right in for verse one with hard-hitting raps.

Continuing on with her self congratulatory tone, she added: ‘New Chanel, I rock It – twist and it ain’t even out yet – All this jewelry at the grocery Store – I’m obnoxious.’ 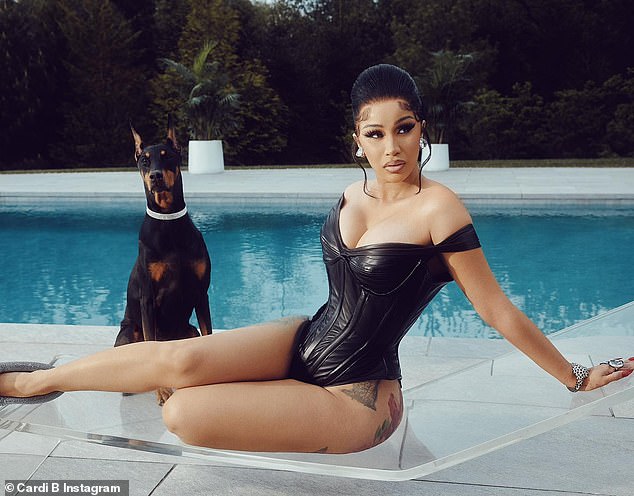 FILTERED: Grammy winner Cardi shared a celebrity retouching secret earlier on Thursday by posting a corset-clad poolside snap, which showed her tattooed thighs both with a filter and without a filter 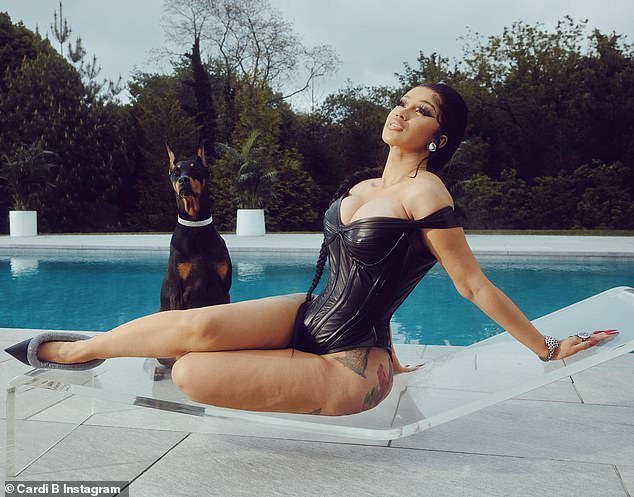 NON-FILTERED: In the non-filtered version of the photo, the Bronx-born 29-year-old’s left thigh showed tiny ripples of cellulite that most average women have, and the filtered version smoothed her thigh out

She also highlighted her accumulating wealth by spitting out lines like, ‘Bought a home and closing on another – I know I’m blessed – Everybody wanna be gang – Ain’t no spots left – Bad b**ch contest – Thеre wouldn’t be a contest.’

The song also marks the second time Ye has collaborated with Lil Durk on a song. The Chicago natives previously worked together on the song Jonah that made it on to West’s studio album, Dona (2020).

Leading up to the release, Cardi (born Belcalis Almánzar) had been in promo mode, teasing a 15 second snippet fro. the track while sipping champagne on a New York City rooftop dressed only in a Disco Daddy Studio bathrobe and towel.

And 15 seconds was all the Bronx, New York native needed to start creating TikTok dance/lip-sync videos as she remarked: ‘It’s starting already! 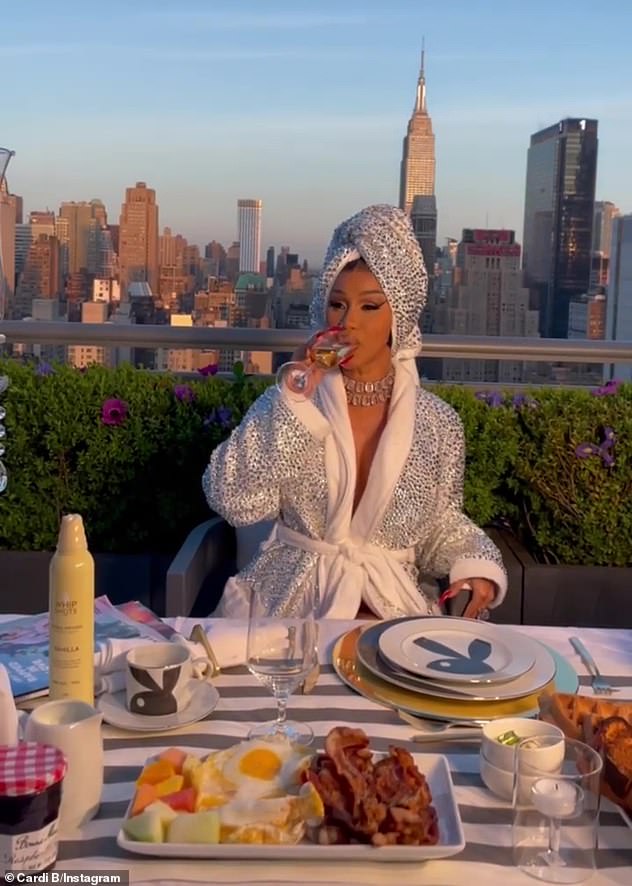 Sneak peak! On Wednesday, Cardi (born Belcalis Almánzar) teased a 15-second snippet from the trap track while sipping champagne on her New York City balcony clad only in a Disco Daddy Studio bathrobe and towel 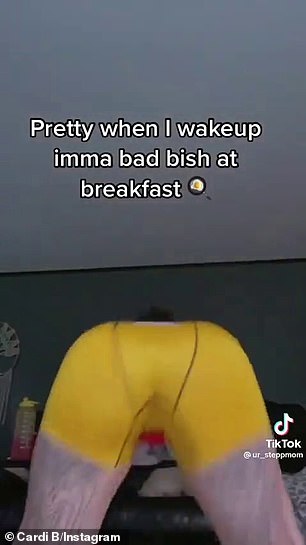 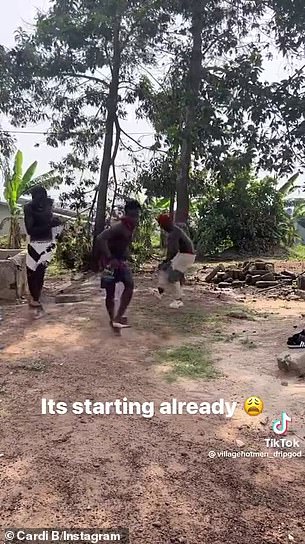