An alleged paedophile has been filmed waddling down the street after being arrested by sex crime detectives, before struggling to fit inside their police van.

The Central Coast man is accused of sending her explicit messages to who he thought was a 14-year-old girl online.

It’s alleged the 50-year-old also arranged to meet her for sex.

Detectives from the Child Abuse and Sex Crime Squad began engaging online with the man from Sydney’s north-west last month.

After being arrested on the streets of Tuggerah on Thursday, police raised his home and seized computer storage devices. 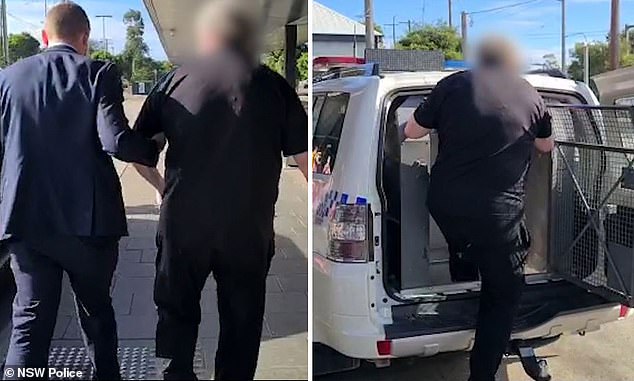 Video of his arrest shows the man being dragged away by the arm during his arrest, but he struggles to keep up with the officer and is forced to waddle down the street.

He then climbs into the back of the police van, with difficulty.

The man was taken to Wyong Police Station and was charged with using a carriage service to procure a child under 16 years for sexual activity.

He was refused bail to appear at Wyong Local Court on Friday.