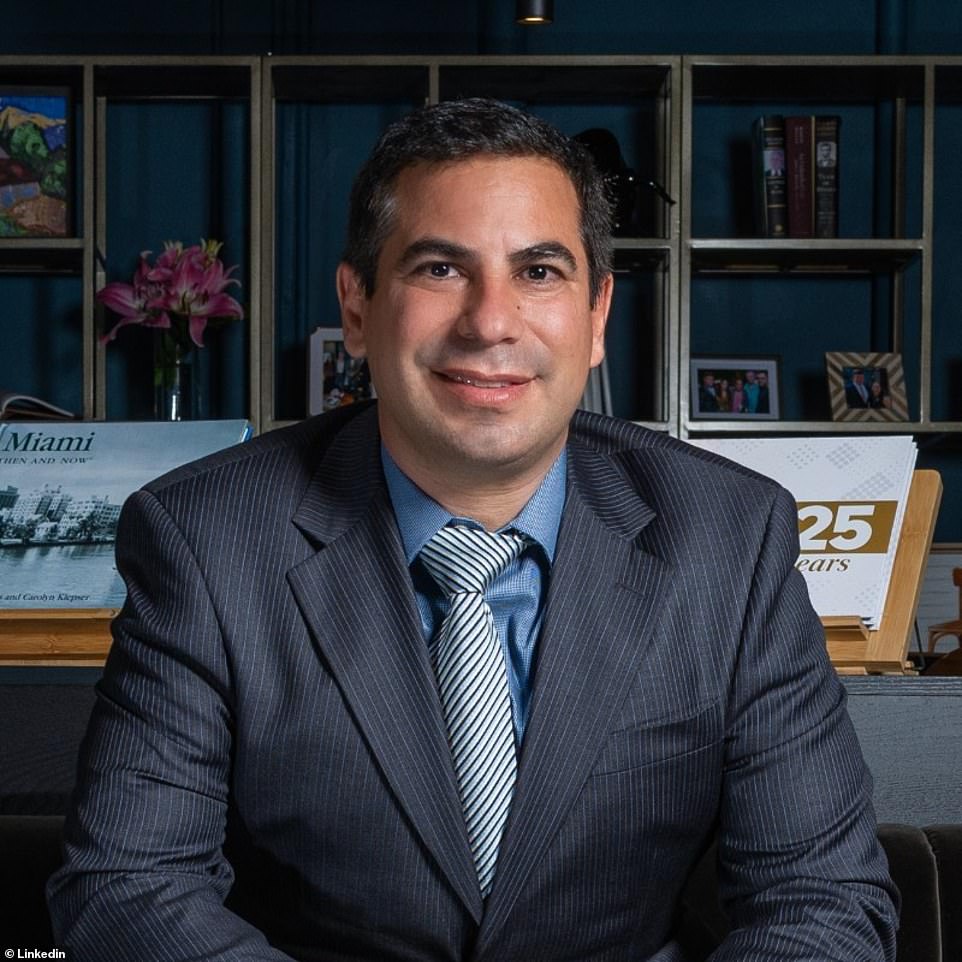 An elusive SPAC CEO who helped ex-President Donald J Trump take his media and technology company public is also the CFO of a mysterious firm with offices in Wuhan, China.

One is Digital World Acquisition Corp (DWAC) – where Orlando is the Chief Executive Officer (CEO) – and it shook up Wall Street earlier this week when it announced its merge with Trump Media and Technology Group, sending shares soaring nearly 1,000 percent.

With the money from the firm, Trump reportedly plans to kickstart his social networking app Truth Social, which Trump Media and Technology Group’s website detailed as a ‘media powerhouse to rival the liberal media consortium and fight back against the Big Tech companies of Silicon Valley’. 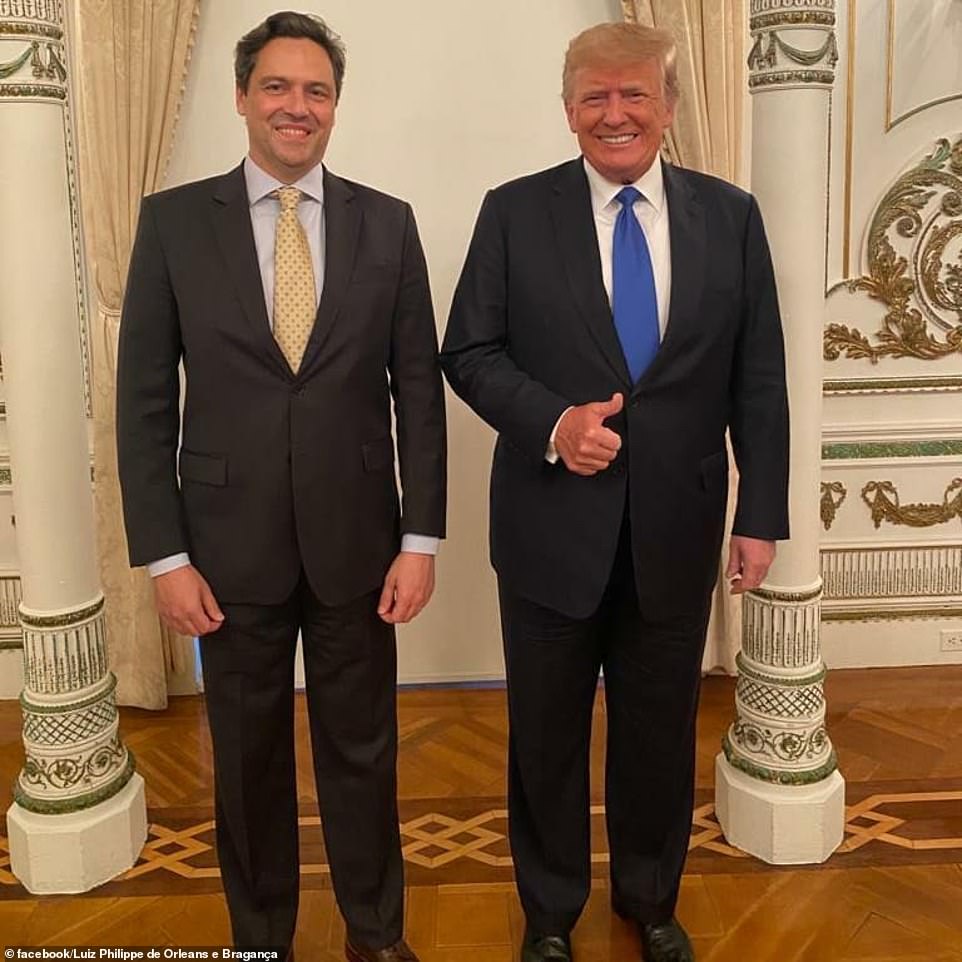 Meanwhile, DWAC’s Chief Financial Officer (CFO) is a member of Brazil’s national congress and self-proclaimed Brazilian prince who wishes to restore the royal monarchy by the name of Luiz Philippe de Orleans e Braganca, according to Yahoo Finance.

Before becoming an unofficial monarch in Latin America Philippe received his Masters from Stanford University and worked for a New York City-based investment bank. 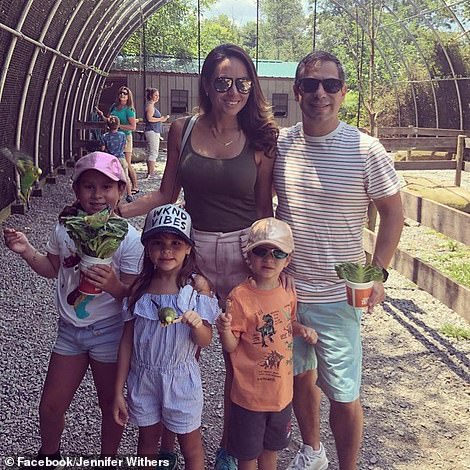 The elusive CEO, who graduated with two degrees from the Massachusetts Institute of Technology (MIT) is married to wife Jennifer and has two daughters and a toddler son (pictured)

The activist and politician is now a member of Brazil’s national-conservative PSL party and lives in São Paulo with his wife Fernanda Hara Miguita and son Maximilian.

Philippe has expressed that ‘like President Trump, (he) believes in fair and balanced bilateral trade, investing in defense and keeping strong borders’.

While the prince has shared photos of him with Trump on his social media and has very publicly supported the ex-president’s social media venture, The New York Times revealed that Orlando and Trump actually knew each other before making the deal.

Although the nature of their relationship was unclear, Orlando also has ties in the sunshine state with a $1.4million mansion in Miami’s luxe gated community L’Hermitage, where he presumably lives with his wife Jennifer, his two daughters and his toddler son.

The four-bed, four-bath home is located along the water of Biscayne Bay and is surrounded by ‘lush tropical gardens, a huge pool and tennis courts,’ according to a listing of the house. 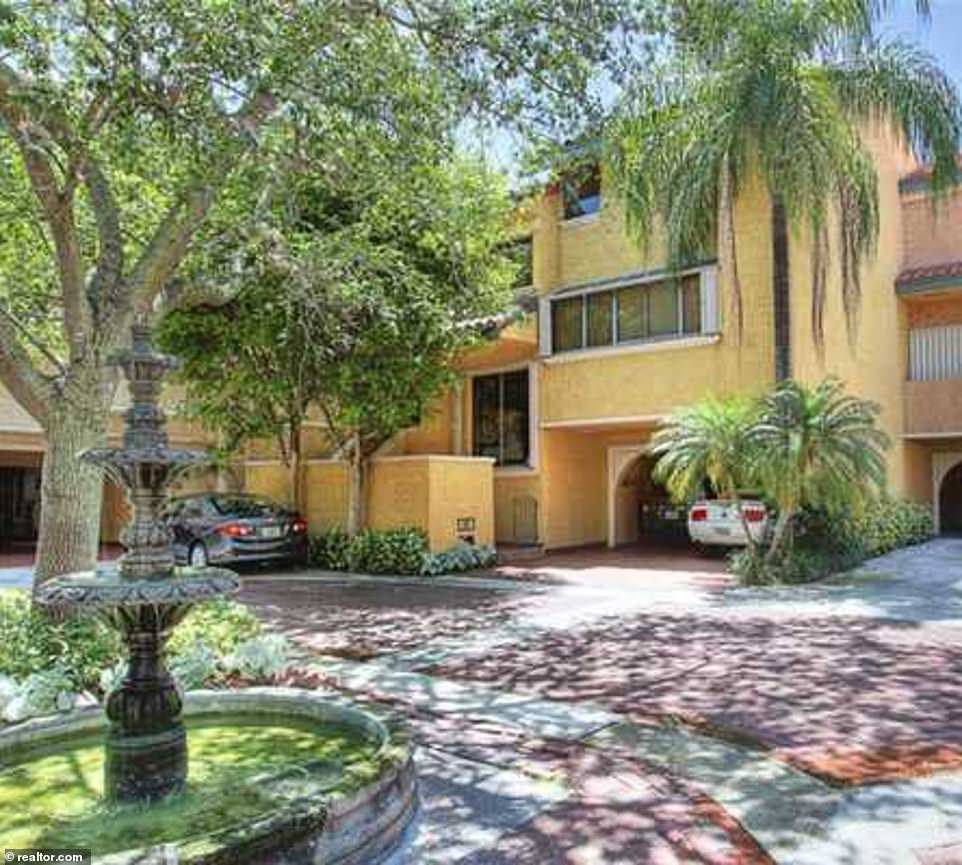 Like Trump, Orlando also has ties in the sunshine state with a $1.4million mansion (pictured) in Miami’s luxe gated community L’Hermitage 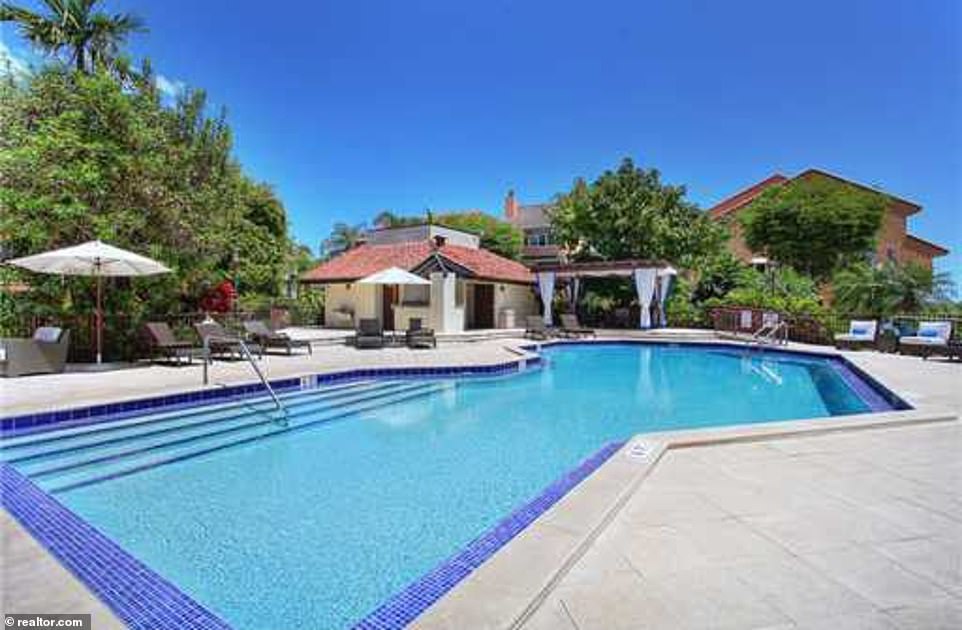 The four-bed, four-bath home is located along the water of Biscayne Bay and is surrounded by ‘lush tropical gardens, a huge pool and tennis courts,’ according to a listing of the house 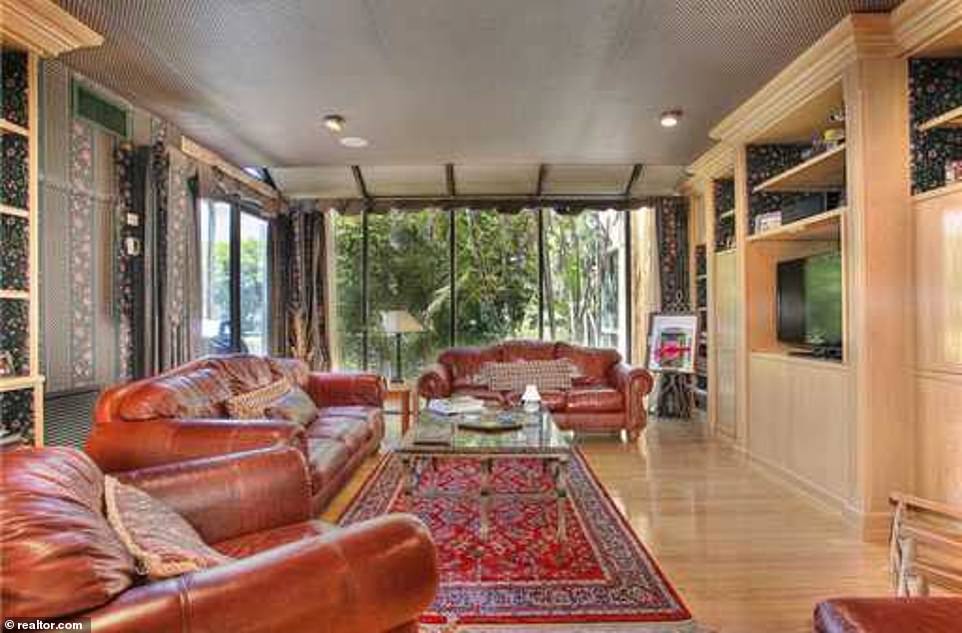 Orlando lives in the nearly 4,000-square-foot house with his wife Jennifer and three children

However, as Trump looks to confirm his ‘lab leak’ theory, which claims that the novel coronavirus leaked from a lab in Wuhan, China, Orlando has seemingly been focusing his attention to the same city, where his other SPAC is headquartered.

Yunhong International is a Cayman Islands-based blank-check company with offices in Wuhan – just 12 miles away from China’s Wuhan Institute of Virology, where a bombshell report by the Wall Street Journal revealed three Chinese scientists were hospitalized in November 2019.

Although the report failed to disclose raw data, safety logs and lab records from the Institute’s supposed extensive research with Covid in bats, it nevertheless gave new life to the ‘lab leak theory,’ which has only been further complicated by the discovery or Orlando’s foothold in Wuhan, China.

The Journal confirmed that the scientists worked at the Wuhan Institute of Virology and were treated for an illness that resembled Covid weeks before the virus would begin ravaging China and the world.

According to Yunhong International’s SEC filing, it was authorized to have offices in China on December 23, 2019. The document was signed by Orlando as well as the company’s CEO Andrey Nivikov – a 50-year-old Estonian politician – and Chairman Yubao Li – a 38-year-old Chinese businessman. 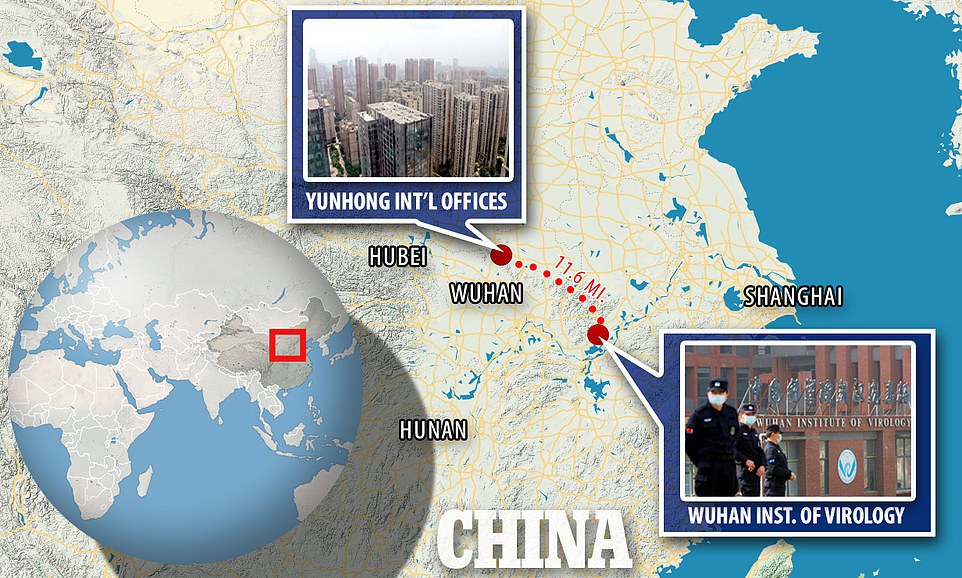 Orlando’s SPAC Yunhong International has offices in Wuhan, China, just 12 miles away from away from China’s Wuhan Institute of Virology – where a bombshell report by the Wall Street Journal revealed three Chinese scientists were hospitalized in November 2019, which reignited Trump’s ‘lab leak’ theory 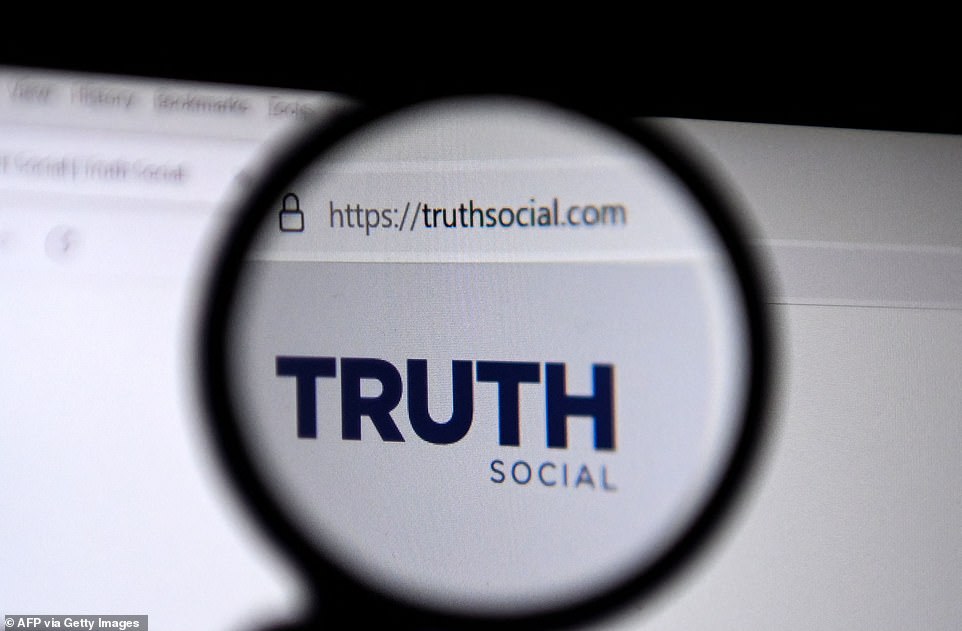 Orlando returned to his roots as a Trump-affiliated financier after the news of the former president’s proposed social media site Truth Social, which is expected to launch by early 2022

The document stated that Orlando has been the CFO of Yunhong International since September 2019 and noted that the father-of-three he has an extensive resume in business after graduating with two degrees from the Massachusetts Institute of Technology (MIT).

From April 1998 to December 2003 Orlando was the Director of Emerging Markets Derivatives at Deutsche Bank – a firm that served as the primary lender for the Trump Organization.

Then in April 2012 he started Benessere Enterprises Inc, ‘a firm that specializes in investing and incubating startup companies involved in real estate’ in Miami, Florida, and has been serving as the CEO ever since.

Six months later he added the investment bank Benessere Capital LLC to his portfolio and from March 2014 to August 2018 he co-founded the sugar-trading company Sucro Can International LLC and served as the CFO.

Orlando returned to his roots as a Trump-affiliated financier after the news of the former president’s proposed social media site Truth Social.

Trump announced Truth Social after he was axed from Facebook and Twitter for having a hand in the January 6 attack on the Capitol. He has mentioned that his long-term goal with it is to create a conglomerate that would go beyond disrupting the broad swath of media giants – naming Amazon, Apple, Netflix and Google among others – to rival the likes of CNN and Disney+. 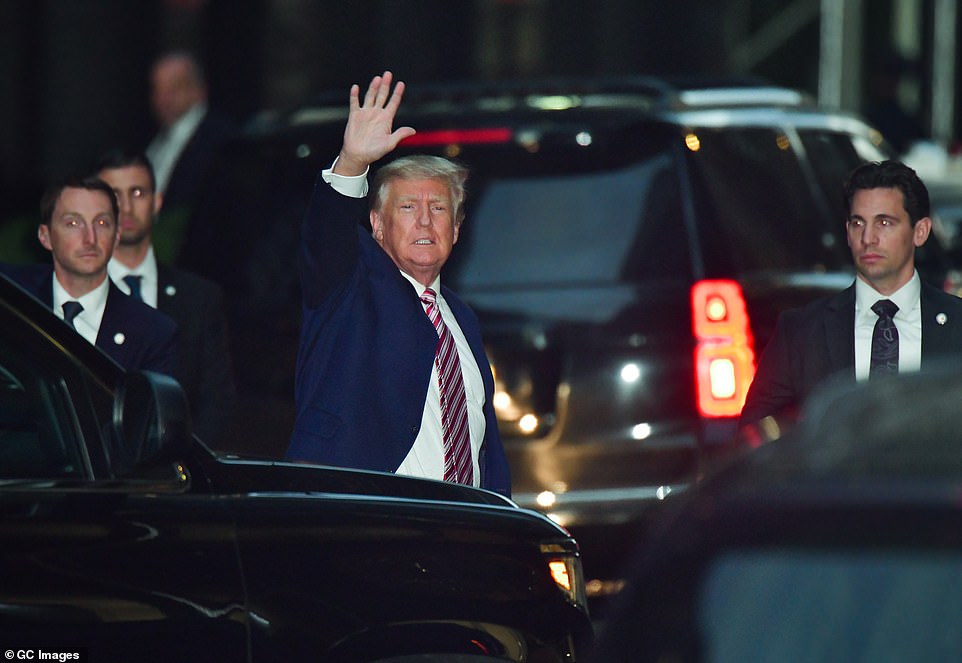 Trump is chairman of his new media venture, Trump Media and Technology Group, which is aiming to disrupt Netflix, Amazon, Google and Facebook, among other tech giants

The social media company is looking to launch by early 2022 and to do so would go through a public merger with Orlando’s DWAC before next year’s mid-term elections, according to Yahoo.

The news site reported that if all goes to plan, the merge would allow Trump to reach millions of supporters he would otherwise be unable to communicate with thanks to his social media ban. 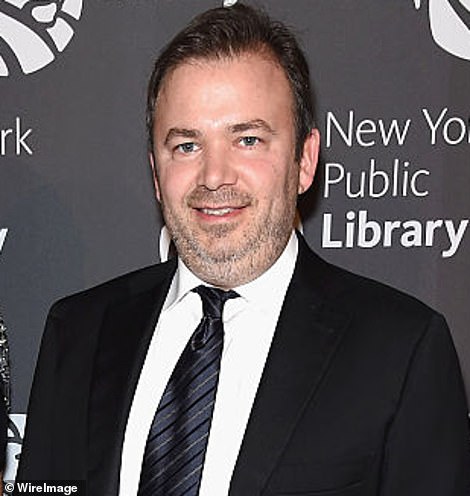 Just yesterday Lighthouse Investment Partners and Saba Capital withdrew their shares of DWAC, despite the stock soaring 300 percent on Friday.

Boaz Weinstein – who owns $3.5billion worth of Saba Capital and was was included in Forbes’ top 40 earning hedge fund managers – announced he was selling his stake in a statement that read: ‘I knew that for Saba the right thing was to sell our entire stake of unrestricted shares, which we have now done.

‘Many investors are grappling with hard questions about how to incorporate their values into their work. For us, this was not a close call.’

His firm sold much of its stake early Thursday morning, making a small profit before the shares soared higher. They owned 2.4million shares of the SPAC, or 9.3 percent.

Meanwhile, Lighthouse Investment Partners had owned 3.2million shares – or 11 percent. ‘Lighthouse was not aware of the pending merger and no longer holds unrestricted shares of the SPAC,’ the fund said in a statement.