The South African, 37, won the first round of the series, at Centurion Club in St Albans, Hertfordshire, with a one-stroke victory.

Schwartzel, a former Masters champion, also won a further £609,000 ($750,000) for being part of the winning team – with players competing both individually and as part of a four-man team.

Speaking at the presentation, LIV Golf chief executive and former world number one Greg Norman said ‘the evolution of golf has arrived’.

And Schwartzel, receiving the trophy, added: ‘Never in my wildest dreams did I ever think we could play for that much money in golf.

‘As you could see I was taking a bit of heat down the stretch and there was a lot of money involved.’

Schwartzel’s victory comes after US golfers Patrick Reed, Bryson DeChambeau and Pat Perez confirmed they will be joining the tour.

But the American defectors have been accused of ‘betraying’ the victims of the 9/11 terror atrocity in a scathing letter from a prominent support group.

The furious message was sent directly to representatives of Phil Mickelson, Dustin Johnson, DeChambeau, Reed and Kevin Na, with the claim that they have become ‘complicit’ in the ‘whitewashing’ of Saudi Arabia’s reputation by cashing in with the controversial LIV Invitational Series. 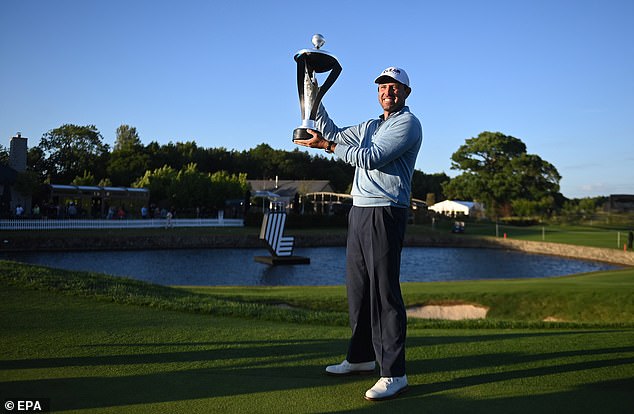 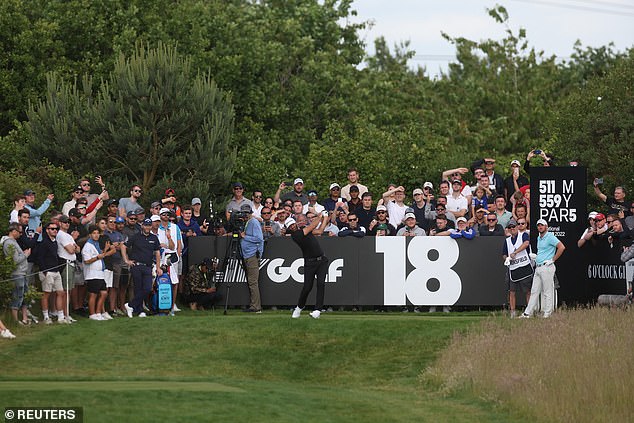 Two-time major champion Dustin Johnson tees off on the 18th hole during the final round of the event at Centurion Club in St Albans, Hertfordshire 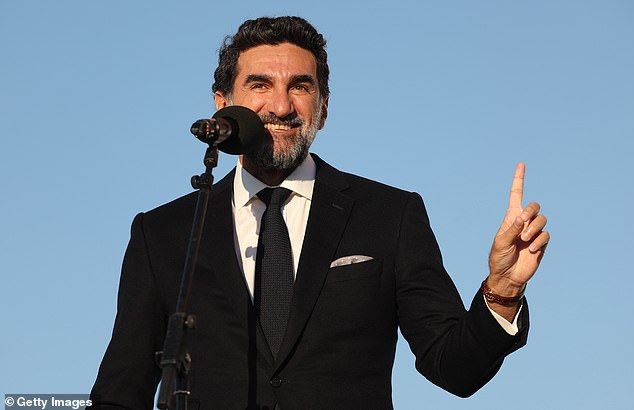 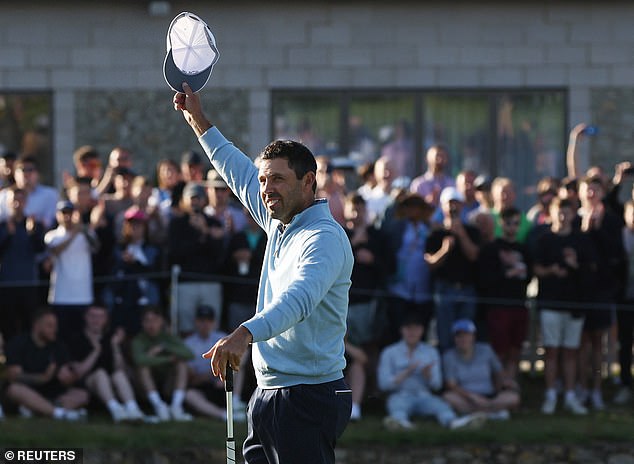 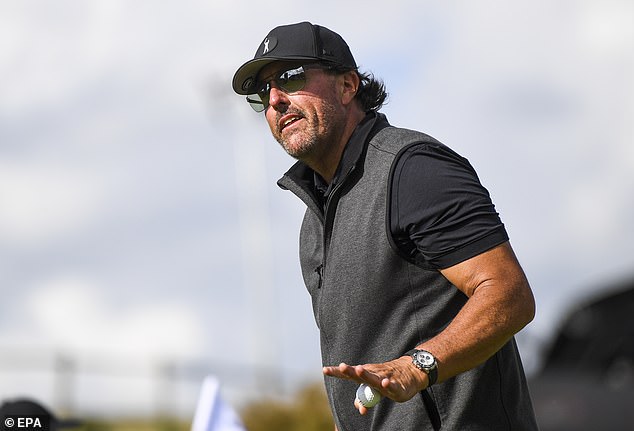 In citing Saudi Arabia’s prominent role in the terror attack, Terry Strada, the chair of 9/11 Families United, wrote: ‘Whether it was the appeal of millions of dollars of hard cash, or just the opportunity to prosecute your professional grievances with the PGA, you have sold us out.

‘This is a betrayal not only of us, but of all your countrymen.’

Strada, whose husband died in the attack, added: ‘Our community wishes to express our outrage at your partnership with LIV Golf and remind you of the responsibility that your new business partner, the Kingdom of Saudi Arabia, shoulders for providing the financial support and logistical support that enabled the terrorists to attack our nation and kill our loved ones.

‘As you may know, Osama bin Laden and 15 of the 19 September 11 hijackers were Saudis. It is the Kingdom that has spent 20 years in denial: lying about their activities, and cowardly dodging the responsibility they bear.

‘Yet these are your partners, and much to our disappointment, you appear pleased to be in business with them.

‘Given Saudi Arabia’s role in the death of our loved ones and those injured on 9/11 -your fellow Americans- we are angered that you are so willing to help the Saudis cover up this history in their request for ‘respectability’. When you partner with the Saudis, you become complicit with their whitewash, and help give them the reputational cover they so desperately crave- and are willing to pay handsomely to manufacture.

‘Please, do not insult our loved one’s memories and take the pathetic position, as one of your foreign colleagues did last week, claiming you are ‘just golfers playing a game’ or blandly treating the evils of the Saudi regime as ‘human rights’ concerns. You are all Americans, keenly aware of the death and destruction of September 11.’

The letter came as the start-up tournament has been hugely criticised as an attempt at ‘sportswashing’ Saudi’s tarnished reputation.

And the source of its wealth and its impact on the golf landscape, amid Saudi Arabia’s human rights record, has also come under close scrutiny. 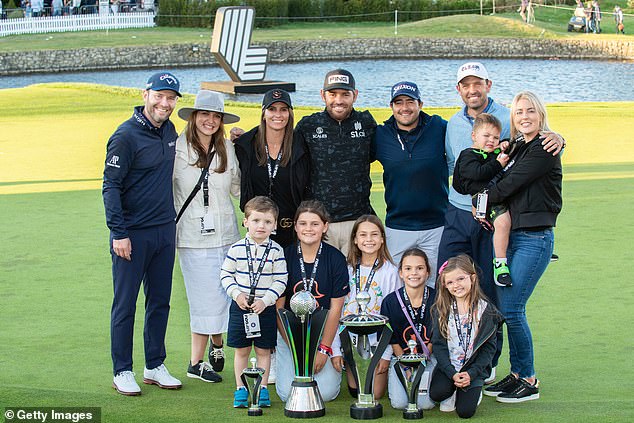 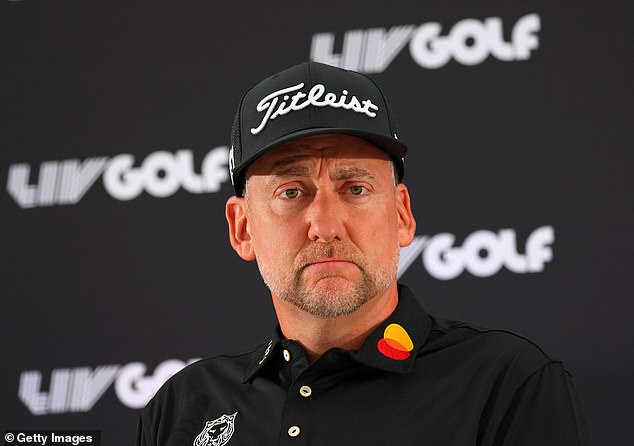 Barely half an hour into the first day of the inaugural event, the PGA Tour handed out indefinite suspensions to 17 golfers who took part.

The DP World Tour – formerly the European Tour – is yet to announce whether it will also sanction players who have signed up, but the PGA appear unlikely to get support from other sporting bodies.

The LIV tournament, backed by Saudi Arabia’s sovereign wealth fund the PIF, featured a 54-hole format with no cuts and a shotgun start where each group of three begins on a different hole.

As well as the individual stroke play competition, 12 teams of four, chosen by captains at a pre-event draft and boasting names such as Stingers and Fireballs, competed for the prize pot.

Schwartzel won the event, which included just four of the world’s top 50 players, despite bogeying the final hole.

Finishing seven-under, he saw off fellow countrymen Hennie du Plessis and Branden Grace – with around 100,000 watching live on YouTube.

One insider told the BBC: ‘I wasn’t sure we’d ever see a shot hit. But I think it now has legs and will absolutely be a big part of the landscape of professional golf.

‘Lots of players who were on the fence would love to be involved now.’

More players are expected to be revealed before the second tournament takes place in Portland later this month.

Events will then follow in New Jersey, Boston and Chicago.