She’s an icon of the British music scene but Kate Bush is almost as famous for her shyness as her glittering career.

Now the success of her powerful 1985 hit Running Up That Hill (A Deal with God), used in a compelling scene in Netflix’s teen drama Stranger Things, has brought her back into the spotlight she usually takes pains to avoid.

This week 63-year-old Bush broke her usual reserve to release a statement via her website, thanking a new generation of fans for propelling the 37-year-old song to undreamed-of heights in the streaming charts.

She said the song was ‘being given a whole new lease of life by the young fans who love the show – I love it too!

‘Because of this Running up that Hill is charting round the world. It’s all really exciting! ‘Thanks very much to everyone who has supported the song. I wait with bated breath for the rest of the series in July. Best wishes, Kate.’ 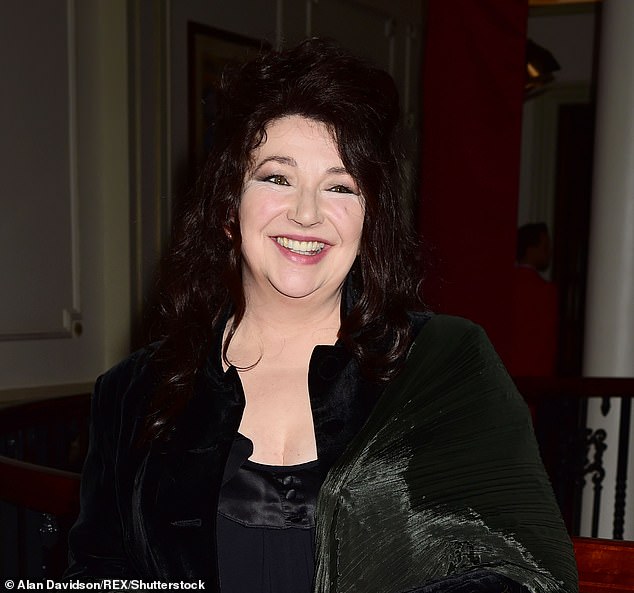 Since then, the single has pushed Harry Styles into second place and been the No. 1 song on Spotify’s daily global chart three times, with up to 8.5 million streams per day.

Yet Bush’s tone with her fans is typically low-key and graceful. She may be worth an estimated £30 million and live in a £6.4 million Oxfordshire mansion but she shuns the bling and glitz or any of the look-at-me antics of the Instagram generation of pop stars.

So who is she exactly – and how did she earn her reputation as, in her own words, a ‘recluse’?

To her neighbours in a sleepy Thameside village, she is just a regular person – though she’s also happy to sign the odd autograph when asked. 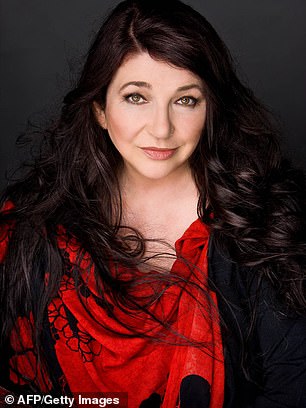 She may be worth an estimated £30 million and live in a £6.4 million Oxfordshire mansion but she shuns the bling and glitz or any of the look-at-me antics of the Instagram generation of pop stars

Postman Colin Mildenhall, 67 who delivers to Bush’s home almost every day said: ‘We talk about the garden, the weather and other normal things. She never speaks about her work and I never ask her about it.

‘You would never think that she’s a big star and she doesn’t strike me as the sort of person who’s interested in that sort of stuff. She’s a very quiet person, she hardly ever leaves her home and I’ve never seen her walking around. She goes out to check on some of her neighbours and that’s about it.’

Mr Mildenhall revealed that following the re-emergence of Bush’s song in Stranger Things he asked her to autograph some of her original records which he’d owned since they were initially released.

He added: ‘My manager also wanted Kate to sign a book so he accompanied me one day so that he could meet her. She was happy to do it and even gave him an original copy, which she owned, because his was a fake.’

Pensioner Chris, who lives in a cottage opposite the main entrance to Bush’s house with his wife Pam, told MailOnline: ‘She’s been a good friend to us over the years and we’ve been good friends to her.

‘She’s always popping over for a chat and to see how Pam’s doing, because she’s not been well lately. Kate is a lovely person and completely normal. I know her music is becoming popular again, but I’ve never spoken to her about it or asked anything about her career. To us, she’s just a delightful and kind friend and neighbour.’

He added: ‘We talk about the weather, the garden and how the flowers are doing. She’s not interested in the fame, that’s obvious and hardly ever goes out but if she does, it’s to London to do her music stuff.’

Bush’s hermit-like existence has led to unsubstantiated speculation over the years that she may suffer from mental health issues, anxiety, stage fright or is a compulsive over-eater – but in truth it has only fuelled her mystique as music’s most insular superstar. 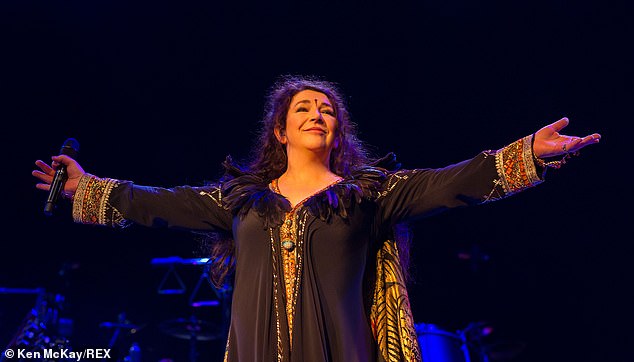 To her neighbours in a sleepy Thameside village, Kate Bush (pictured performing at the Apollo in 2014) is just a regular person – though she’s also happy to sign the odd autograph when asked 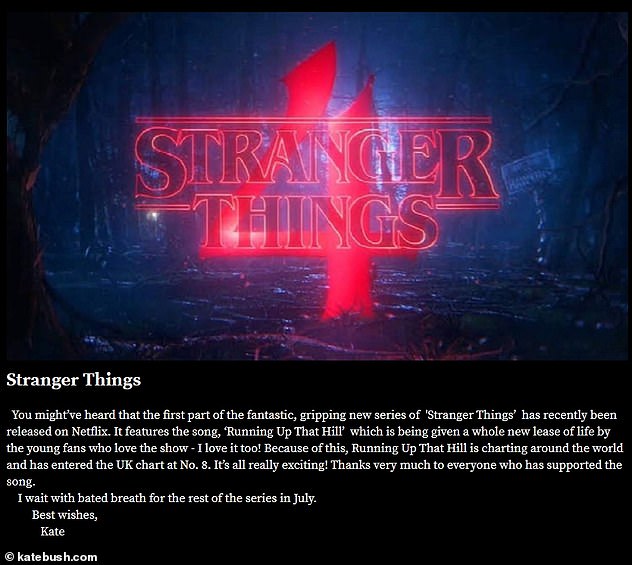 The 63-year-old wrote on her website: ‘You might’ve heard that the first part of the fantastic, gripping new series of Stranger Things has recently been released on Netflix. It features the song, Running Up That Hill which is being given a whole new lease of life by the young fans who love the show — I love it too!’

But shunning the showbiz world and the red carpet has not prevented her from amassing a considerable fortune. She is believed to have a £5 million property portfolio that includes a Central London flat and a Devon seaside retreat.

The 19-year-old doctor’s daughter from suburban Bexleyheath, south-east London, burst onto the music scene in 1978 with her haunting, ethereal song Wuthering Heights.

Before breaking into the charts, the singer-songwriter was considered a child prodigy. She taught herself to play the piano aged 11, then the organ and violin and, by her mid-teens, had composed more than 200 songs.

At 14, Bush was spotted by Pink Floyd guitarist Dave Gilmour, who helped her get a record deal.

But her sudden fame with a debut Number One saw her uncomfortably labelled a ‘sex bomb’, as she writhed on stage in a skin-tight leotard.

Over the course of her career, she has toured just twice, in 1979 and 2014 and has only put out two collections of new material in the last 28 years. During her sell-out concerts of 2014 she asked fans not to film her on their mobile phones as she found it ‘intrusive.’

Despite enjoying huge popularity, Bush is seldom seen at industry events, rarely gives media interviews and in 2012, she turned down an opportunity to perform at the closing ceremony of the London Olympics. A year later, she appeared uneasy receiving a CBE from the Queen. 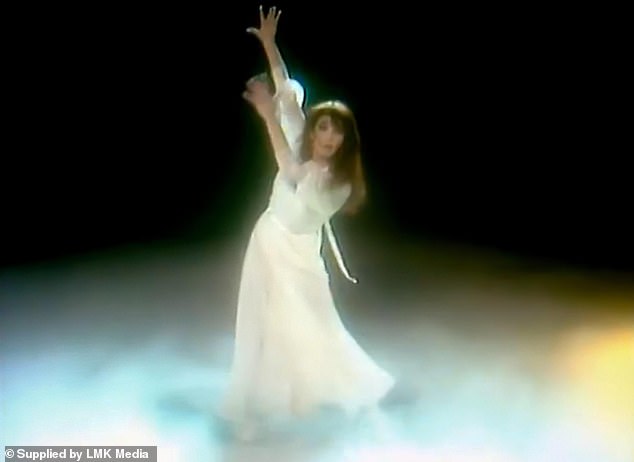 Wuthering Heights, Bush’s most successful song, propelled her to international stardom and a multi-million fortune but over subsequent years, she has steadily closeted herself away.

During one of her rare interviews in 2005 she admitted: ‘I am just a quiet reclusive person who has managed to hang around for a while.’

As her biographer Graeme Thomson was reported as saying: ‘She has spent the past 30 years backing away. Her career has been an incremental process of withdrawal.’

Bush’s withdrawal from public life is believed to have started as a response to grief that she suffered in the early 1990s. Her guitarist and friend Alan Murphy died of Aids in 1989, just as her sixth album, The Sensual World, was released.

Then, in 1990, a dancer she worked closely with, Gary Hurst, also died of Aids. Two years later, her mother Hannah succumbed to cancer.

She became so guarded about her private life that news of her son’s birth in 1998 only emerged publicly five years later when her friend, singer Peter Gabriel blurted out ‘Kate’s a mum now’ during a TV interview.

Becoming a mother also led to Bush becoming sensitive about her weight, which came to light when she brought out the album Aerial in 2005, which was critically acclaimed. 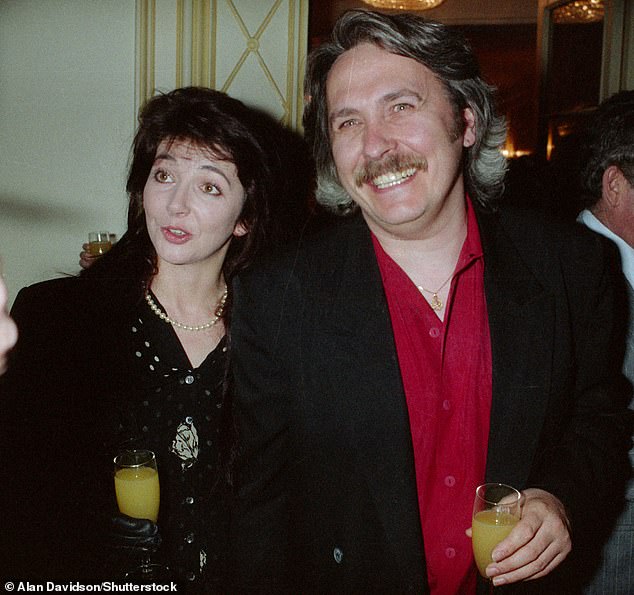 Bush, 63, shares her stunning £6.4 million Grade II listed home with her husband of 30 years, guitarist Danny McIntosh (pictured together in 1991) and their 24-year-old son Albert

Director Jimmy Murakami, who shot the video for the album’s single King Of The Mountain, told her biographer Mr Thomson: ‘I thought she looked fabulous, but she kept bringing up her weight. I told her she looked lovely. You can’t go back to your teenage days, and to me she still looked very good.’

This isn’t the first time that Bush has recruited a new generation of young fans. Last year her 1980 single Babookshka went viral on TikTok and was harnessed in thousands of videos.

The show’s supervisor Nora Felder said she chose the track because it resonated with the Max’s pain and loss.

‘I think it’s struck a chord for so many people because it really touches on the alienation and emotional struggle that so many of us go through at one point or another in life, especially as teenagers,’ she told US journalists.

Felder approached Bush for permission to use it, but was nervous about the response because of the singer’s reputation for being fussy how her music is used.

As it turned out, she was already a fan of the drama and happily consented.