A Chicago police officer was shot on Chicago’s South Side five days after another cop was gunned down in the same neighborhood as surging crime rates continue to plague the Windy City.

Chicago Police Department spokesman Tom Ahern tweeted on Sunday afternoon that an officer from the department’s 7th District had been shot and was being transported to the University of Chicago Hospital.

Fire Department spokesman Larry Langford said he believed the officer’s wounds were not life-threatening, according to The Chicago Tribune. The shooting broke out in the area of 69th and Sangamon streets when the cop along two other uniformed officers ‘conducted a traffic stop’ at around 2 p.m. in an alley.

During the stop, officers were fired upon by the unidentified male suspect and ‘returned fire,’ according to a statement from police. The injured officer sustained a gunshot wound to the chest and to his left arm. The two other officers were unscathed.

A handgun was found at the scene, police spokesman Tom Ahern tweeted. At least 18 shell casing markers around a silver Toyota sedan were found after investigators searched the shooting scene, The Chicago Sun-Times reported.

Chicago Police Superintendent David Brown later said in a press conference that no other suspects were involved in the gunfire exchange. He added that the injured cop and ‘his team members are all shook,’ from the incident. 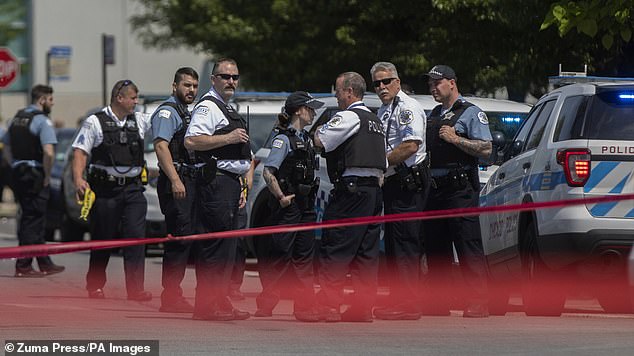 A unidentified Chicago Police officer was shot in the left arm and chest after exchanging gun fire with a suspect following a traffic stop in an alley near 69th and Sangamon streets in the Windy City’s Edgewood neighborhood on South Side. Two other officers were also involved in the shooting 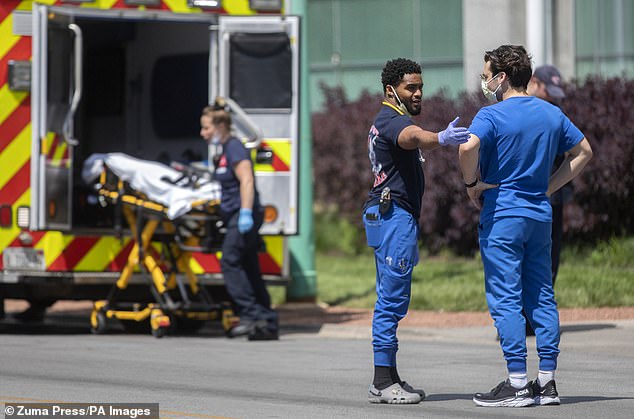 The cop was brought to the University of Chicago Medical Center, where he is recovering from non-life threatening life injuries. The suspect was also rushed to urgent care, where is he in critical condition 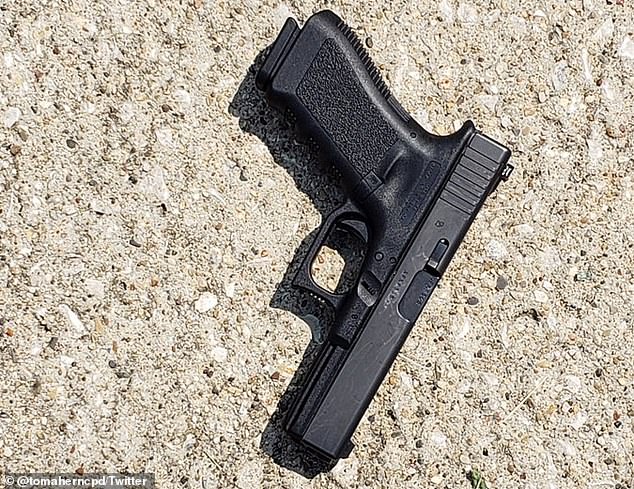 A handgun was recovered from the shooting scene on June 5, just five days after another cop was shot in the same neighborhood 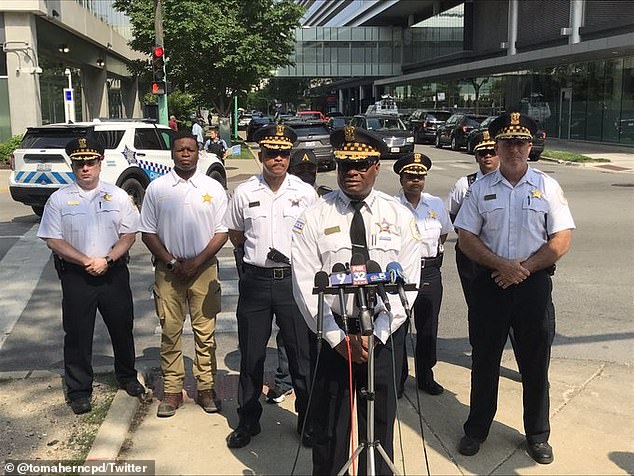 The incident marks the third time in a week that a law enforcement officer has been shot in Chicago.

Fernanda Ballesteros – another Chicago police officer – was shot on June 1 after she also conducted a traffic stop in the same neighborhood where Sunday’s shooting occurred, the Chicago Tribune reported.

Ballesteros, along with another cop, were in a marked squad car attempting a traffic stop in the West Englewood neighborhood, according to police Supt. David Brown.

The car the officers were trying to pull over first sped up, and then slowed down to pull even with the squad car, Brown said.

At that point, someone in the car started firing a gun at the officers.

Ballesteros, who was driving, was shot and wounded in her shoulder, Brown said. The officer who had been in the passenger seat drove her to the hospital.

Ballesteros was initially in critical but stable condition, Brown said. She was released on Monday from the University of Chicago Medical Center, where several other cops waited and applauded her outside the building.

‘This week has shown me and my family the true brotherhood of the Chicago Police Department, and that the brotherhood extends beyond me to caring and protecting my family as well,’ Ballesteros told the Sun-Times.

‘I am choosing to see the light in this dark time. And I will grow stronger, both physically and mentally, from this tragedy.’ 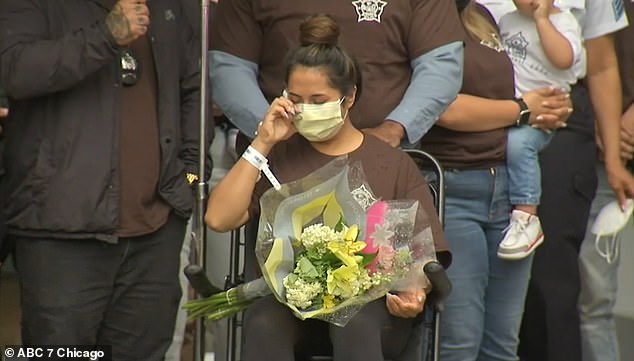 Fernanda Ballesteros was shot on June 1 in the same neighborhood as the injured cop in Sunday’s shooting – Edgewood. She was released from hospital on Monday 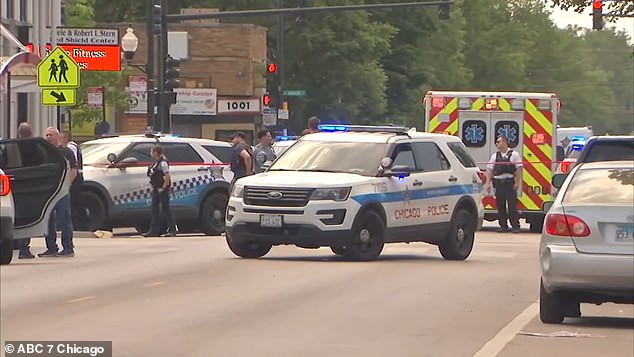 Ballesteros was also overseeing a traffic stop before a 28-year-old suspect opened fire on her. No arrests have been made

The suspect’s vehicle crashed nearby after the June 1 shooting. He fled from it, police said, and remains at large although police have said he is 28 years old.

Ballesteros also provided a few words for the injured officer shot on Sunday.

‘To my fellow brother in blue who was recently injured in the line of duty: Don’t ever feel alone because you have a whole line of support from the blue family that wishes you a speedy recovery,’ she said.

An officer with the U.S. Marshals Service’s fugitive apprehension team and his police dog were also shot Thursday on the city’s Northwest Side while serving a warrant.

The officer was shot in the hand but declined to be taken to a hospital. The dog was in intensive care at an emergency veterinary hospital.

The alleged shooter, 19-year-old Tarrion Johnson, has been charged with attempted murder, attempted robbery with a firearm, aggravated cruelty to animals and injury to a police animal. 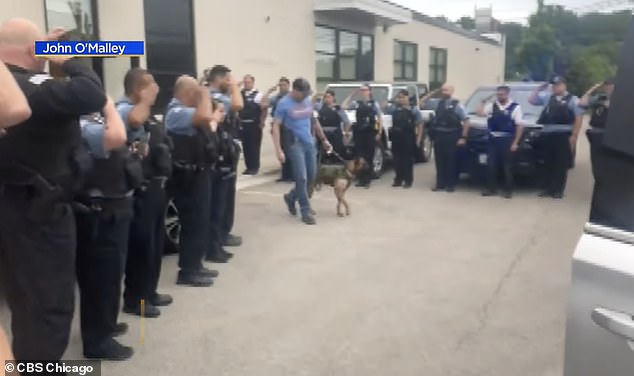 A federal police dog was saluted in a police lineup after leaving a veterinary hospital on Sunday afternoon. The dog was shot in Chicago’s Northwest Side while serving a warrant 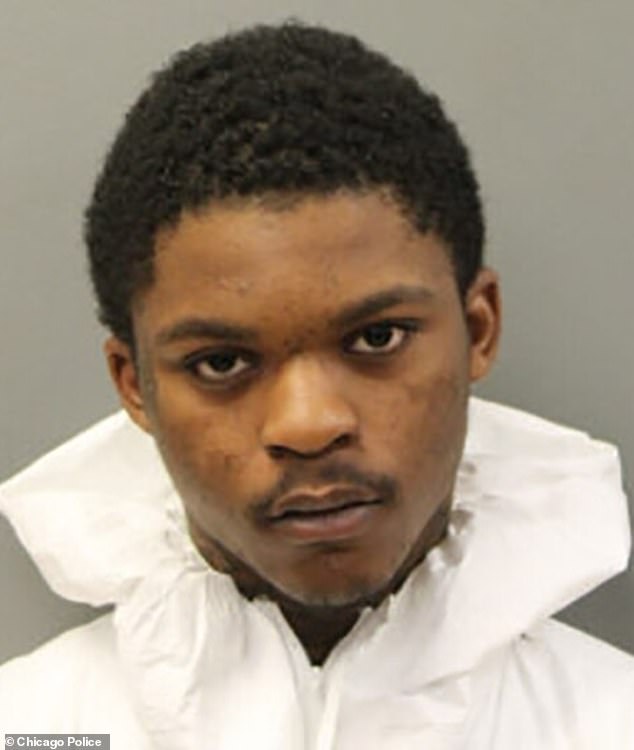 Tarrion Johnson, 19, faces charges of attempted murder, attempted robbery with a firearm, aggravated cruelty to animals and injury to a police animal 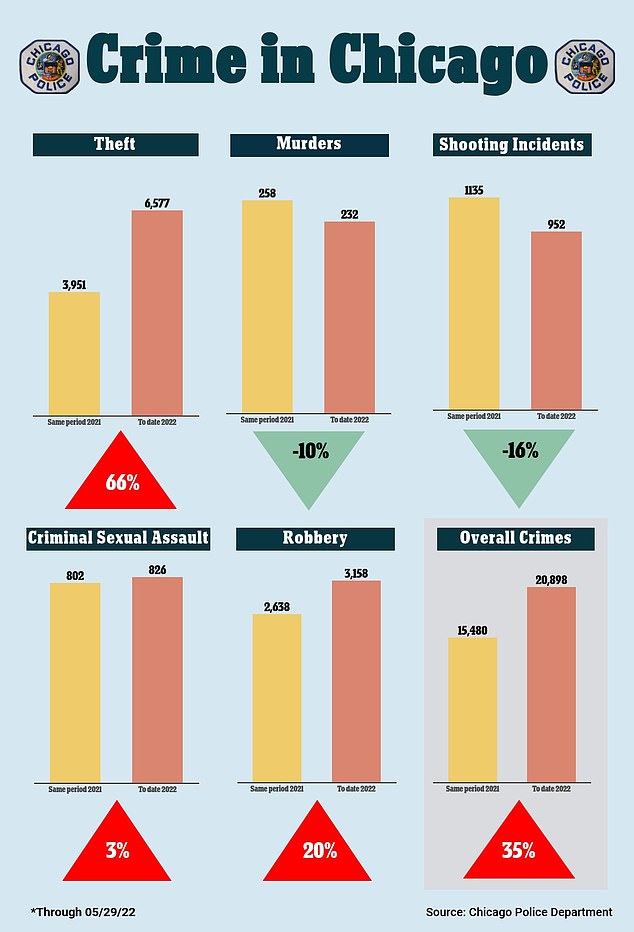 Overall crime in Chicago has surged since last year by 35 percent despite shooting incidents lowering by 16 percent. There were 952 shootings reported in the same period this year, compared to 1,135 in 2021.

Reports of robberies, criminal sexual assault and theft related crimes have all gone up, while murders reported have decreased.

On Sunday afternoon, Mayor Lori Lightfoot issued a response to both incidents in a statement, saying ‘Let me say again, every single day, on every watch, our brave men and women of the Chicago Police Department risk their lives for our safety. But I must ask again, when is enough, enough?’

‘How many times must I, and my fellow mayors across the country, plead with the Senate to take action and end the easy access to illegal guns?’ the statement further read. ‘How many officers and residents must be victims of gun violence before we act?’ 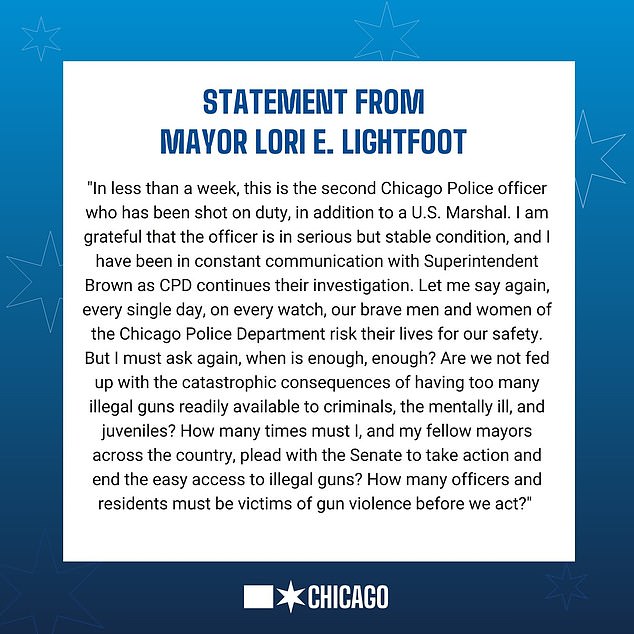 Chicago mayor Lori Lightfoot pleads the Senate ‘to take action and end the easy access to illegal guns,’ in response to both shootings 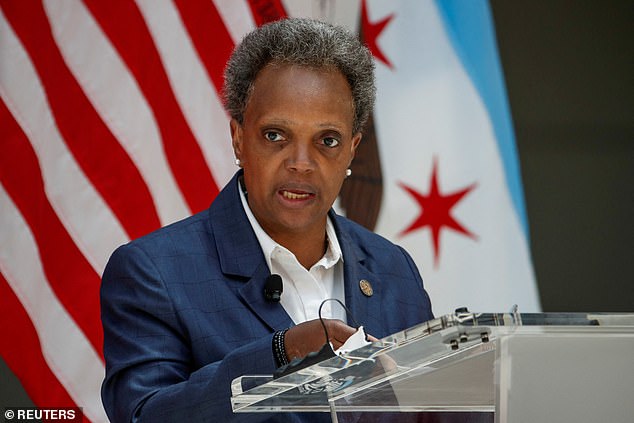 In Chicago, 21 officers have been shot since the start of the new year, according to NBC Chicago.

Lightfoot has also banned unaccompanied minors from Millennium Park in downtown Chicago after 6 p.m. starting on Thursdays through Sundays, following a shooting there that left a 16-year-old boy dead in May.