A heated debate on The Project left Chrissie Swan ‘terrified’ after she clashed with Steve Price over radical environmental activists.

The panel was discussing the recent chaos caused by Blockade Australia as protesters marched through the streets of Sydney, intentionally forcing traffic to come to a standstill.

Price said he couldn’t understand why the group thought they’d gain more support when they spent the week ‘throwing rubbish into the street and disrupting an entire city’.

‘I just think it’s pathetic that they fill barrels with concrete and throw rubbish through the streets, I mean none of us would do that,’ he said on Monday night.

Swan then responded saying she acknowledged it was ‘deeply inconvenient’, before Price cut her off.

‘It’s pathetic!’ he cried out, as a visibly uncomfortable Swan awkwardly laughed and then muttered ‘I’m terrified’. 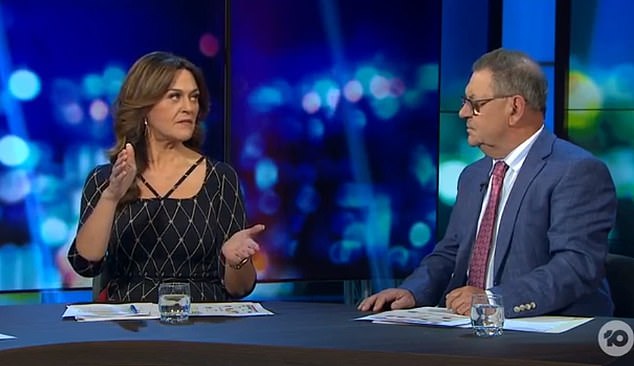 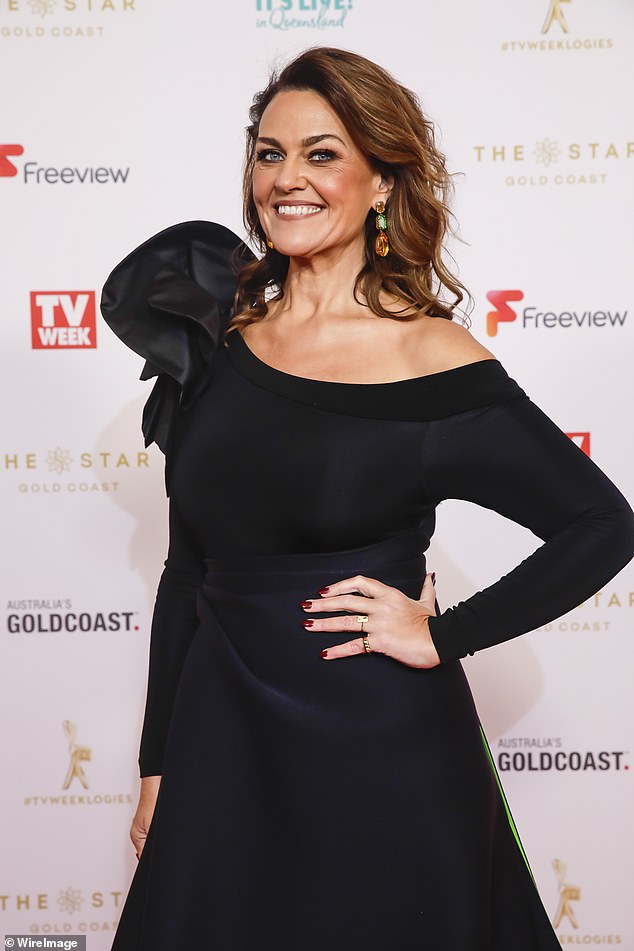 Price continued on his rant, saying the protesters needed to be locked up – before co-host Peter Helliar jumped in to lighten the mood.

‘Chrissie’s trying to chat and you’re saying (the protesters) are disruptive,’ he said as the crowd laughed.

Swan was eventually able to make her point saying the ‘price for apathy is extreme caring like that’.

Price butted in again and said ‘what, breaking the law?’.

‘Well, yeah. I’m OK with it. I would never do that, but I think that’s the price of democracy,’ Swan replied before Price again insisted the activists go to jail.

The tense debate comes after Sydney’s CBD was overrun with Blockade Australia protesters once again on Tuesday morning with 12 arrested.

One woman was aggressively shoved to the ground by police as the group marched to Hyde Park.

A live-stream of the group’s action was shared to Facebook showing dozens running through the city’s CBD while loud chants of ‘what do we want? Climate justice!’ rang out through the streets.

One man was dragged away by three officers while shouting ‘this is not a violent protest!’.

In a tweet, the group said pepper spray was used on some of their members. 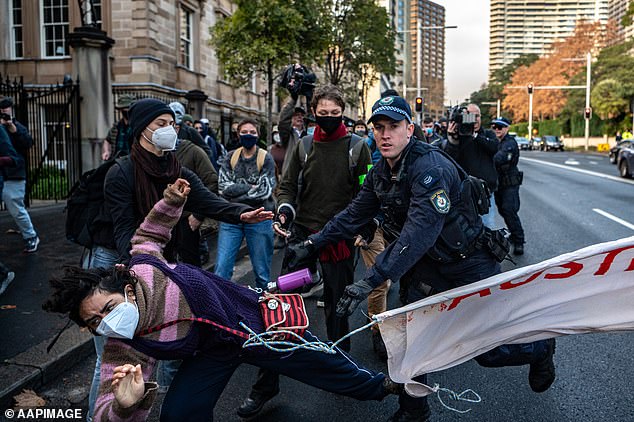 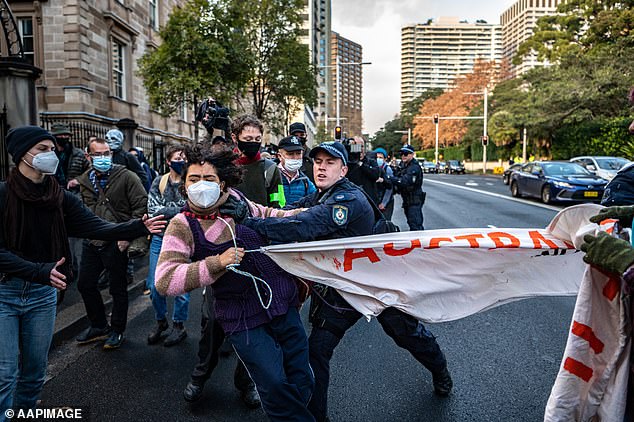 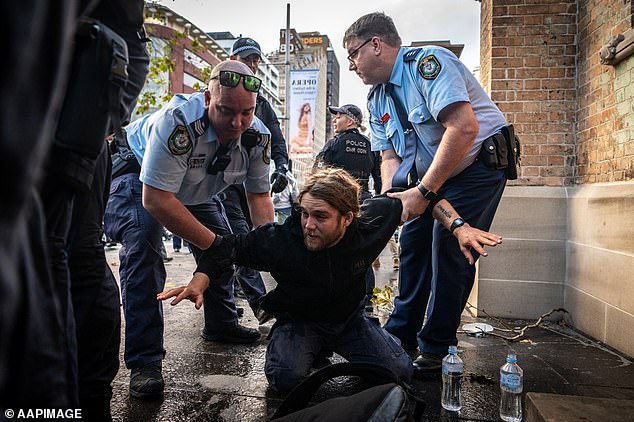 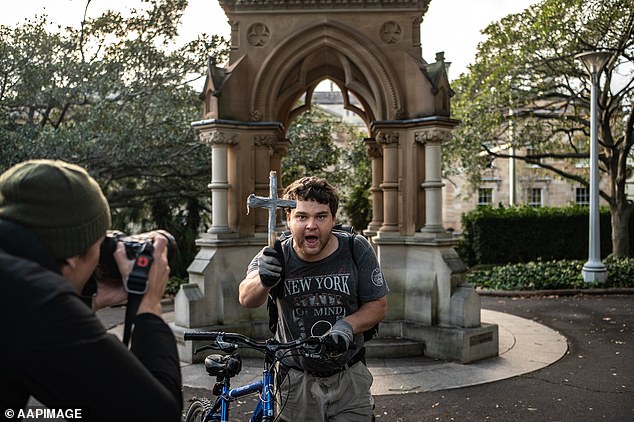 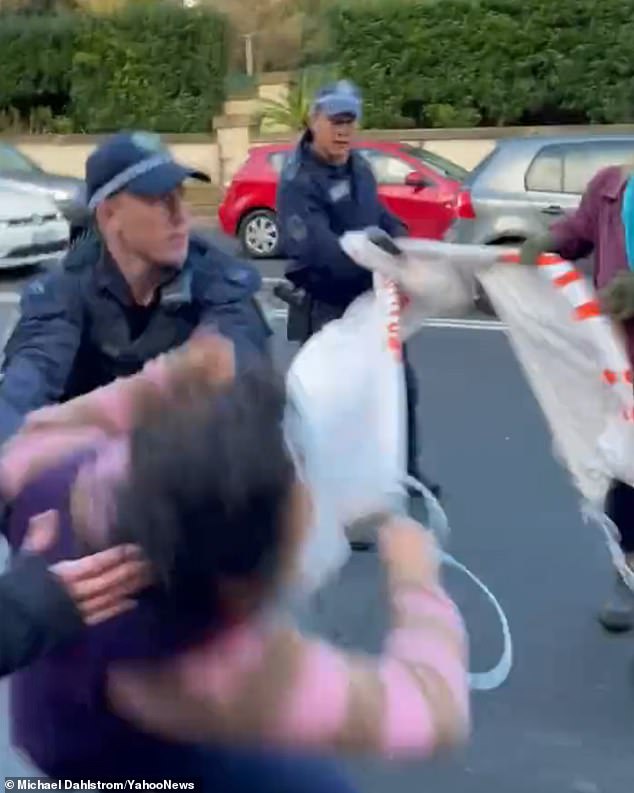 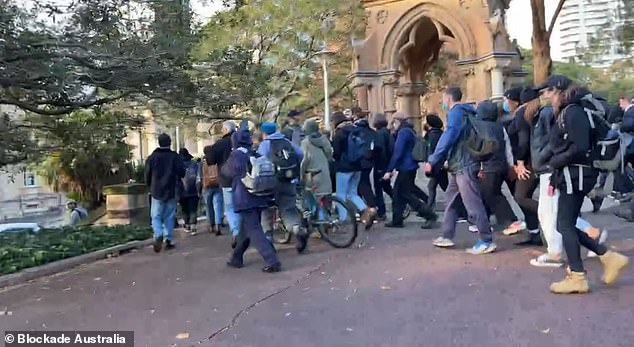 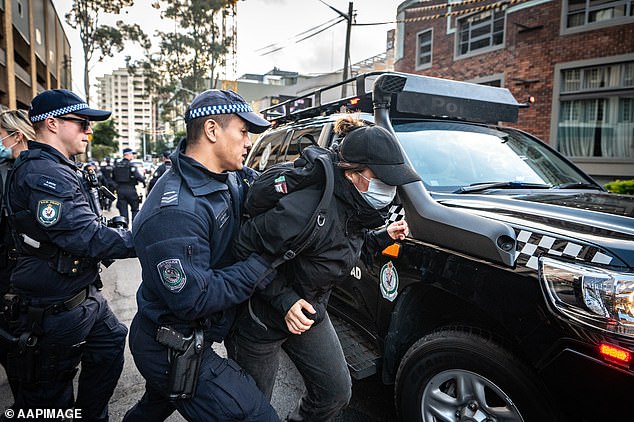 One female protester is seen being dragged away by police. The group caused havoc for a second day on Tuesday 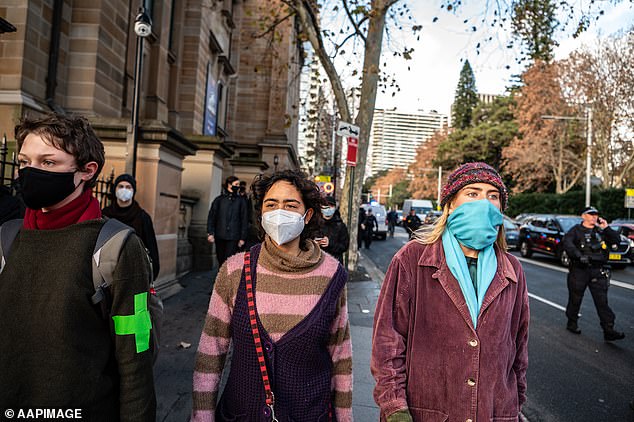 ‘Come to Sydney to resist climate inaction by taking strategic direct action in the heart of Australia,’ the group said.

‘Coordinated action is more important than ever.’

About 50 members were seen in Tuesday’s action – many wearing face masks – while a long line of police officers walked nearby.

‘This is about all the things that are necessary for life to survive on earth,’ one activist filming the demonstration said.

Police were seen questioning one woman while two men were dragged away in handcuffs. 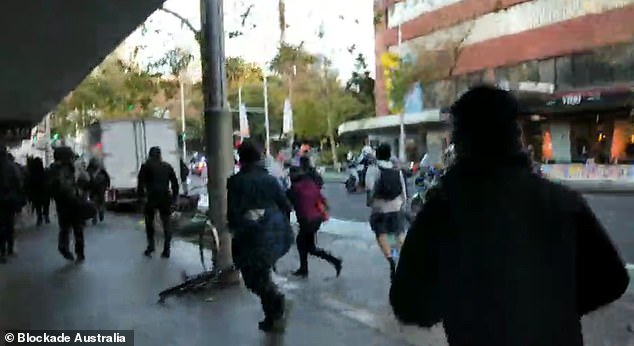 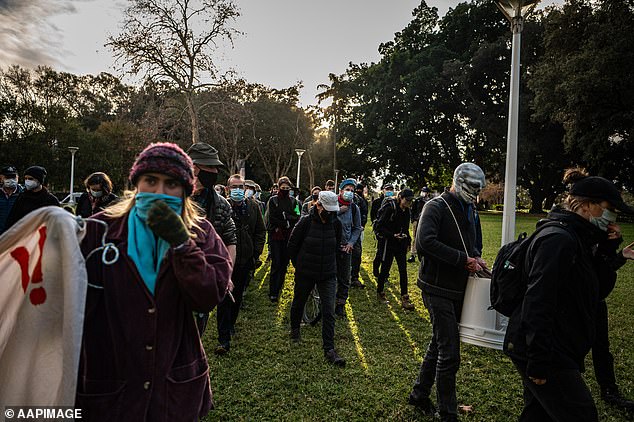 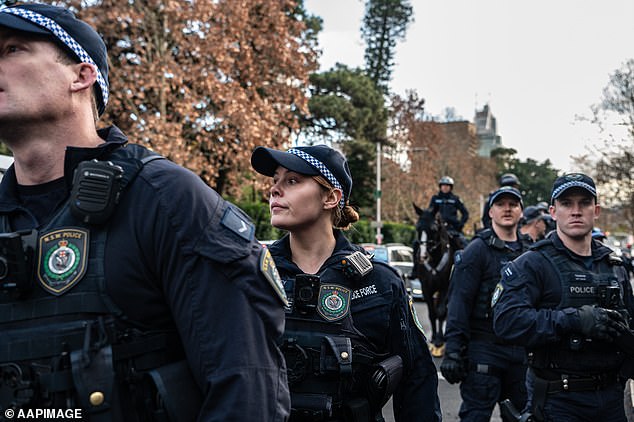 Another member, James Woods said the human species was ‘teetering on the edge of total collapse’.

‘We are facing a catastrophic climate collapse, the biggest existential threat our species has ever known, and the system that we call Australia is driving us straight past the point of no return,’ he said.

‘There is no possibility of meaningful change within this system. Australia has been designed to operate as a project of extraction and exploitation, and without a total upheaval of this project, we have absolutely no chance of survival.’

The group have urged more Aussies to join them for another day of chaos on Wednesday.

‘It can’t go on for much longer, these people are dumb, divisive, disrespectful and they’re bloody idiots who will face the full force of the law,’ he told 2GB.

‘These are not isolated incidents, it’s a coordinated campaign.’

LNP Senator Matt Canavan blasted the protesters as ‘eco terrorists’ and called for law-breakers to be shown the ‘full force of the law’. 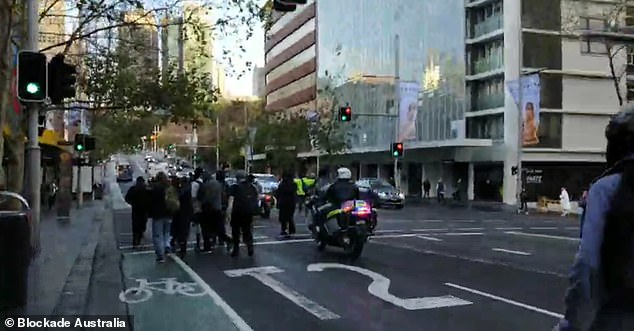 A live-stream of the group shared to Facebook showed dozens running through the city’s CBD towards Hyde Park on Tuesday morning, while loud chants of ‘what do we want? Climate justice!’ rang out through the streets

‘This just shows the folly of negotiating with eco-terrorists. These people will never be happy,’ he told Sky News on Tuesday morning.

‘Give them an inch they’ll take a mile. We signed up to net zero and now they want to end coal next year.

‘They have no idea how world works – they want to threaten and bully people into submission.

‘We have to stand up to it and say no more.

‘People who break the law should be arrested face the full force of the law and there should be no sympathy for them.’

He described the protesters as ‘unreasonable and violent’.

Ten Blockade Australia members were charged after similar demonstrations in Sydney on Monday.

Police allege 60 people were involved the unauthorised demonstration, which saw a hoard of activists storm the streets blocking off traffic at various locations.

Six women and four men aged between 21 and 49 from three states were arrested and charged with a string of offences related to willfully preventing the free passage of a person or vehicle. 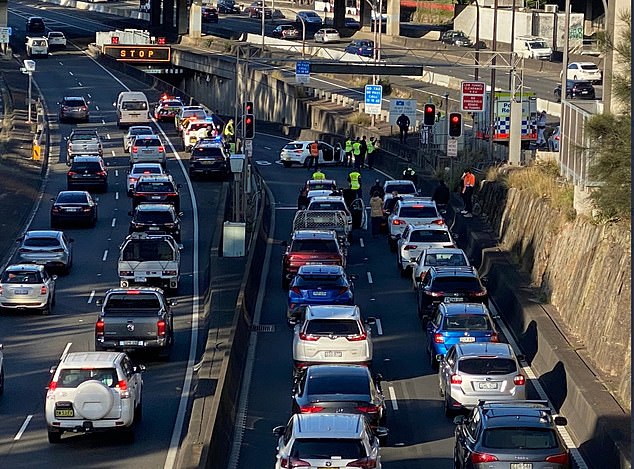 All but one were refused bail to appear in either Central or Downing Centre Court on Tuesday and could be facing heavy fines and up to two years in jail.

Police established Strike Force Guard vowing to maintain a highly visible presence in the CBD for the rest of the week after Blockade Australia warned of further disruptions.

‘It is unacceptable that a small number of people – who have little to no regard for everyday individuals going about their lives, are causing unnecessary disruptions to their morning commute,’ Acting Assistant Commissioner Paul Dunstan said.

‘What these individuals are doing is both illegal and unsafe, putting the lives of themselves, the general public and our officers in danger by running on roadway and blocking roads by other means to disrupt traffic.’

Dozens of specialist officers were deployed to assist in the operation, including the Public Order and Riot Squad, Mounted Police, Rescue Squad, Dog Squad, Traffic and Highway Patrol and Transit Police. 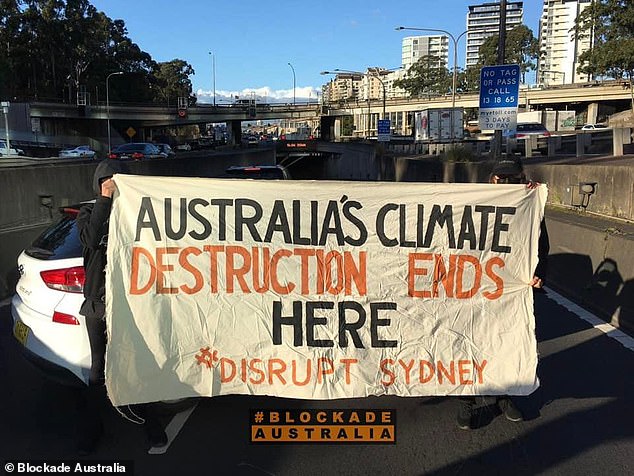 Both sides of the NSW government condemned the protestors’ actions.

‘I would say this to the protesters: Go and get a real job,’ Deputy Premier Paul Toole said.

‘Go and talk to somebody who’s actually been delayed in getting to work today.’

Protesters can be fined up to $22,000 and put behind bars for two years.