By Kamal Sultan Showbusiness Reporter For The Daily Mail

On stage, she’s insulted and brow-beaten by the Ugly Sisters and wicked stepmother night after night.

And Cinderella star Carrie Hope Fletcher has now admitted that the constant hounding of her character has begun to affect her off stage as well.

The singer and actress, 29, has been playing the lead in Andrew Lloyd Webber’s West End musical at the Gillian Lynne Theatre since August.

But after splitting with her boyfriend Oliver Ormson, 32, in January, she has found it increasingly difficult to cope mentally with the abuse her character receives.

Struggle: Carrie Hope Fletcher, pictured at the at The WhatsOnStage Awards 2022, split from boyfriend in January 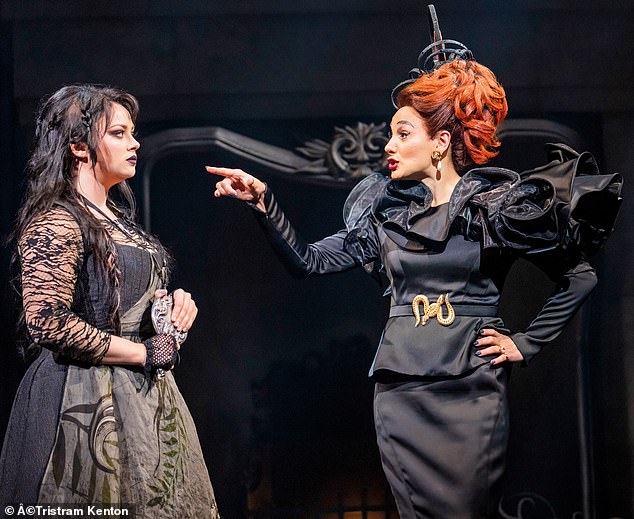 Not such a fairy tale: The star pictured with the stepmother, Victoria Hamilton-Barritt in Cinderella at the Gillian Lynne Theatre

‘Someone I loved left me at the start of the year. I’d be worried about myself if I wasn’t thrown off track by that.

‘But on top of that, I’m in a show where my character is constantly put down.

‘She’s told she’s so physically unattractive she could only ever be loved by someone who can’t see. That no one could ever love someone so shockingly plain. She’s called a goblin, a hag no one would s**g and none of this seemed so bad when I was coming home to someone who loved me but… suddenly those words started to hurt, started to poke at dormant insecurities and rouse them from their slumber.’

Miss Fletcher, who is the sister of McFly singer Tom Fletcher, plays a Cinderella with a gothic twist in Lord Lloyd-Webber’s show.

Writing on Instagram, she added: ‘It’s all pretend… of course I know that, but when things get a little darker, when you’re feeling a little vulnerable and exposed, your mind can play tricks on you. It can start whispering sour nothings in your ear before you go to sleep.’