Three alleged members of the Ready 4 War gang – an offshoot of the notorious Alameddine crime network – have been released back onto the streets within hours of being arrested in sweeping dawn raids.

Eighteen men – all believed to be low and mid-level associates of the Alameddine clan – were arrested on Tuesday morning after a 450-strong team of police officers raided 29 properties across Sydney’s south-west.

The blitz followed a 10-month-long investigation into the organised crime group, with NSW Police commissioner Karen Webb declaring the force had completely dismantled the syndicate and ‘cut the head off the snake’.

Meanwhile, NSW Deputy Premier and Minister for Police Paul Toole claimed police had ‘closed the net’ on one of Sydney’s most ‘dangerous crime families’. 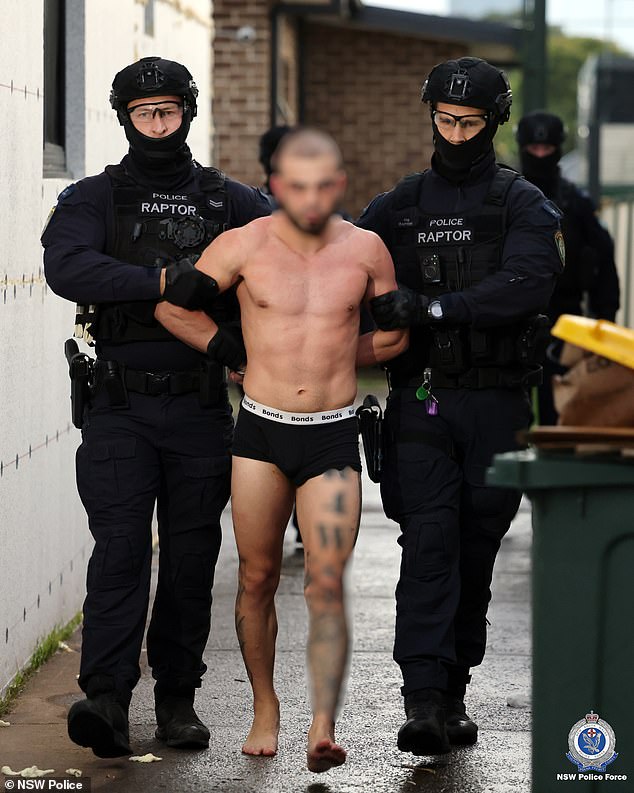 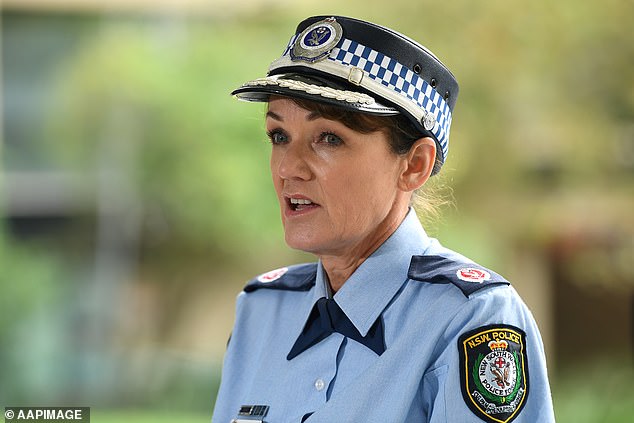 NSW Police Commissioner Karen Webb (pictured) said she was confident police had ‘cut the head off the snake’, shutting down the syndicate altogether

Most of the alleged members of the gang – also known as the ‘Merrylands crew’ – were marched before the courts on Wednesday after being slapped with more than 50 charges collectively, including drug supply, firearm possession, dealing with the proceeds of crime and direct or participate in a criminal group.

But while the majority were refused bail, three men were sent home just hours after being taken into custody.

Fifteen other men who fronted courts in Bankstown, Parramatta, and Fairfield on Wednesday, each facing a string of charges, were all remanded in custody. 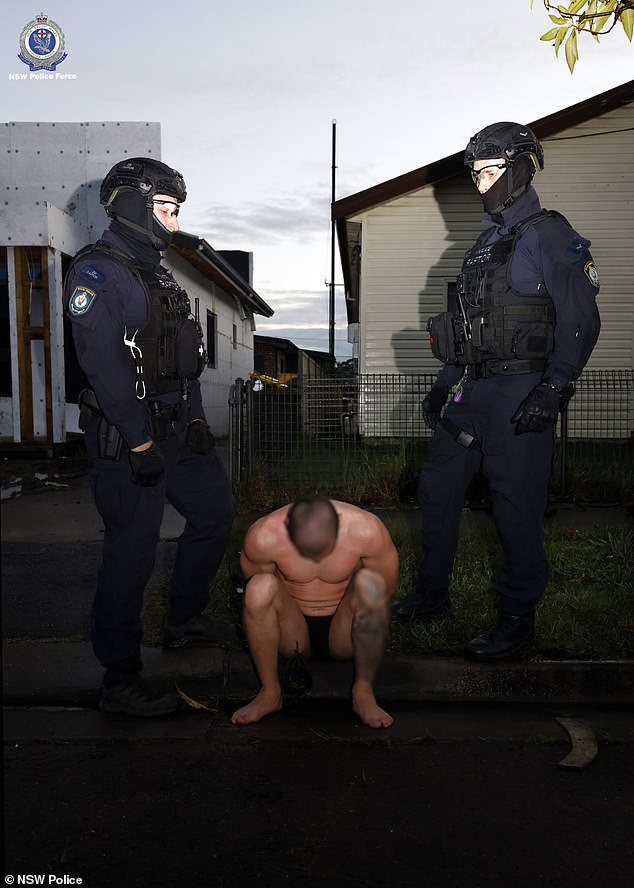 Pictured is one of the men arrested on Tuesday. The blitz follows a ten-month-long investigation into the organised crime group, which NSW Police will allege has been distributing drugs throughout the city 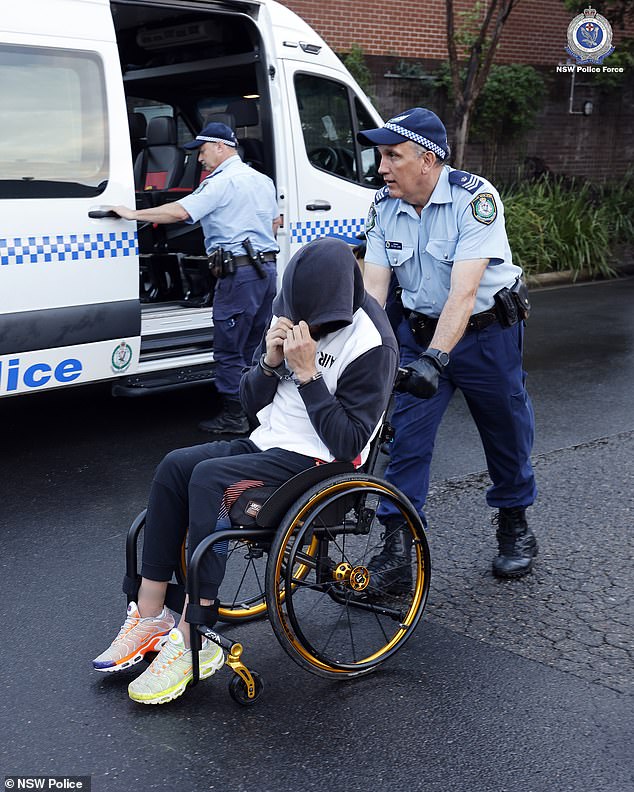 On Tuesday, police, desperate for a win after 14 fatal shootings on suburban streets in the past 18 months, said the raids had brought down a major player in the NSW drug trade.

Dramatic footage showed police ramming down the doors of several homes, before the alleged crooks were taken away in handcuffs.

Commissioner Webb said she was confident police had ‘cut the head off the snake’, shutting down the syndicate altogether.

She said those arrested on Tuesday didn’t appear to be employed but ‘displayed considerable wealth’. 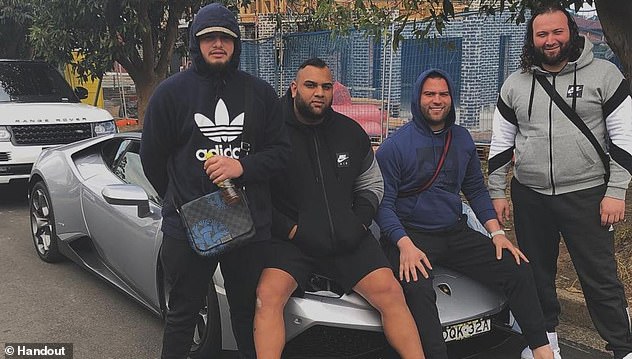 Pictured from left to right are alleged Alameddine associates Ali Younes and Masood Zakaria, and Rafat Alameddine and Hamdi Alameddine. None were arrested in Tuesday’s raids 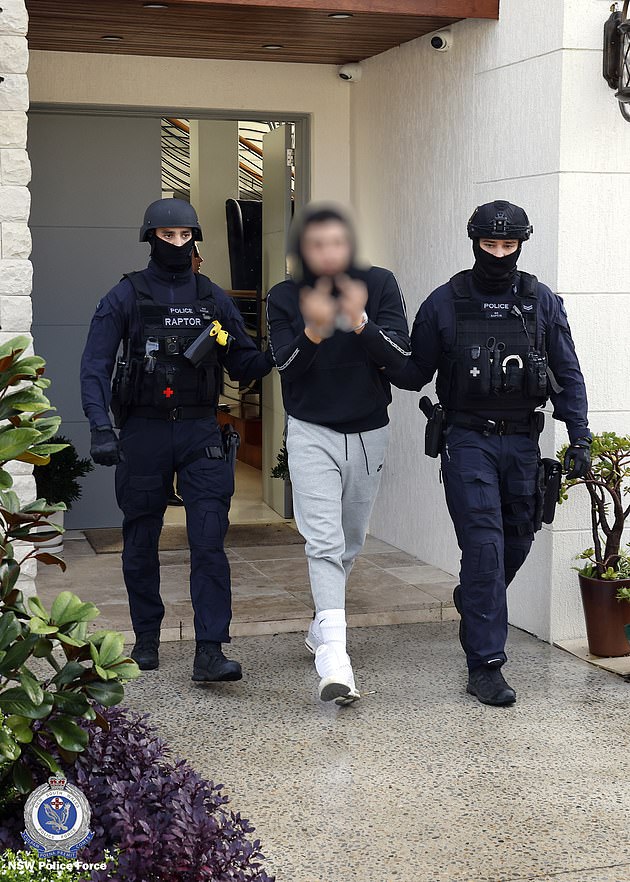 More arrests are expected to be made in the coming days. Pictured is one man who was arrested on Tuesday morning

Police claim mobile phones were seized which allegedly raked in more than $250,000 a week in drug deals.

The alleged dial-a-dealer syndicate utilised 36 phones, with one device having more than 700 customers.

Assistant Commissioner Mick Fitzgerald alleged the phones had ‘contributed to a number of murders’ over the past two years, with large amounts of cash and drugs such as cocaine, prescription drugs, MDMA and cannabis found during the raids. 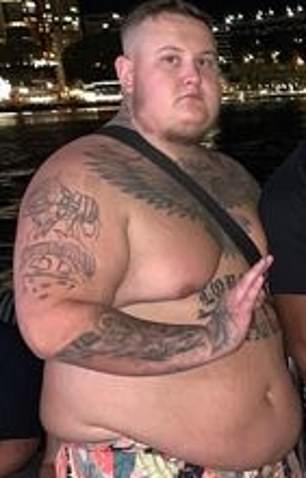 Weapons, luxury watches and jewellery and cars were also found.

‘We believe we’ve had a significant impact on the Alameddine organised crime network – the drug distribution of that network has been dismantled today,’ he said.

Over the past 18 months, 13 people have been killed in gang violence in Sydney’s west and southwest. Three executions have occurred in recent weeks.

The latest shooting occurred on May 14 when Rami Iskander, the nephew of slain gangland figure Mahmoud ‘Brownie’ Ahmad, was shot dead at his western Sydney home.

Iskander, 23, was shot in the chest in front of his pregnant wife and two-year-old child at his home on Knox Street at Belmore.

The young father was killed just weeks after his uncle Ahmad was sprayed with bullets outside a Greenacre home on April 27 after a $1million bounty was placed on his head.

The 23-year-old man who was shot in Belmore, Sydney’s south-west, was identified as Rami Iskander – the nephew of underworld figure Mahmoud ‘Brownie’ Ahmad.

It marks the 13th gangland-style execution to rock Sydney in the last 18 months.

Comanchero bikie Fares Abounader was the first victim in the long spate of shootings after he was killed in a drive-by attack in Panania, south-west Sydney, on August 29, 2020.

Mejid Hamzy was shot dead in Condell Park on October 19, 2020 and then Mustafa Naaman was killed in a suspected mistaken identity attack on Ibrahem Hamze on January 31, 2021.

Mejed Derbas, Shady Kanj, Ghassan Amoun and Mahmoud ‘Brownie’ Ahmad are among the people who have also been shot.

Comanchero bikies with links to the Alameddine clan, Tarek Zahed and his brother Omar were gunned down while leaving a gym in Auburn on May 10, 2022. 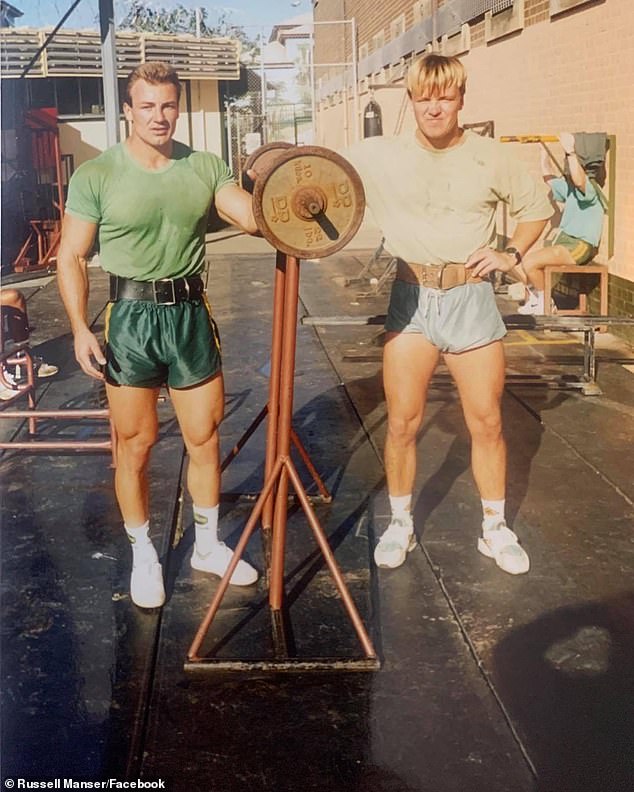 Advertisement A former bank robber and career criminal has revealed how he turned his life around after being sexually abused at a juvenile home and again in prison and going into a destructive downward spiral of crime and violence.  Advertisement Russell Manser, then 17, remembers a prison guard saying ‘have fun, boys’ as his mattress… 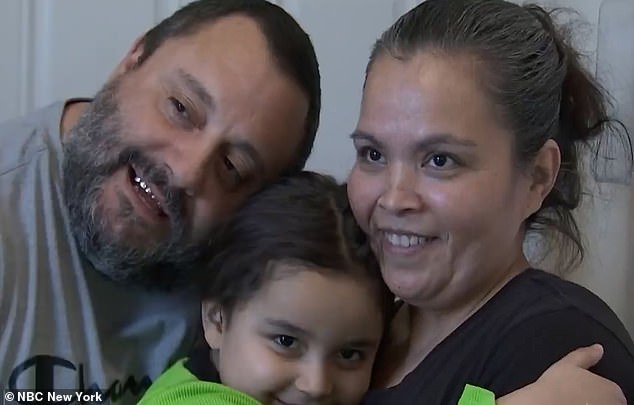 Advertisement A Bronx mother pounced on a career criminal after he randomly sucker-punched her four-year-old son in the head in Times Square. Advertisement Rafaela Rivera, 42, says she was left startled when she heard a noise resembling somebody being hit with a ‘halfway empty bottle of water,’ only to realize mere seconds later that the… 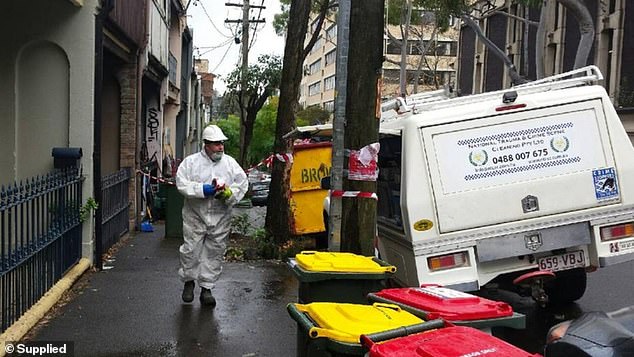 Advertisement A crime scene cleaner has shared the gory details of his job such as cleaning a house after the tenant’s body had been decomposing in it for 19 months.   Advertisement National Trauma and Crime Scene Cleaning managing director Jerry Cook said he received the callout to clean the home in Sydney. The request was… 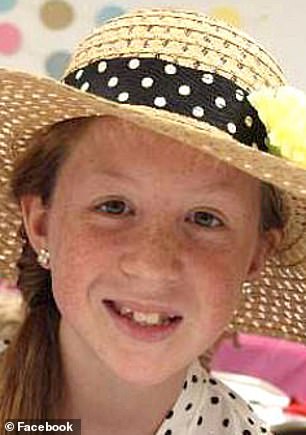 Advertisement The victims of a notorious unsolved 2017 murder were found covered in blood – and their killer took a twisted souvenir, a search warrant has revealed. Advertisement Delphi Bridge murder victims Abby Williams, 13, and Libby German, 14, were found to have lost a large amount of blood when discovered dead close to an… 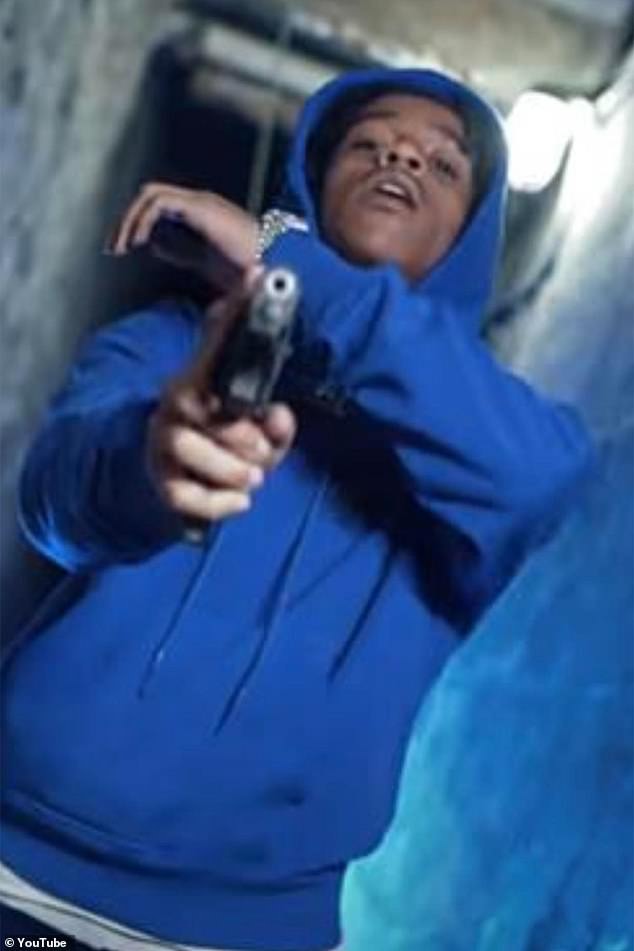 Advertisement Police sources say the Bronx judge who cut loose a teenage rapper and gang member that shot an NYPD officer ‘is agenda driven’ and part of the reason why crime in New York City is spiraling. Advertisement Earlier this week prosecutors dropped charges against 16-year-old Camrin Williams, a NYC rapper accused of shooting NYPD officer…