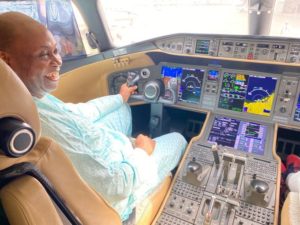 Popular Nigerian musician David Adeleke also known as Davido has seen the arrival of his much talked about jet arrive the shores of Nigeria.

According to reports, the new jet is not for Davido but for his father Adedeji Adeleke. He posted a message along with a picture of his father on his official social media account said, “Congrats Daddy on your (our) new baby !!! ”

Also according to several reports, the new jet is of the same specification of the ones owned by former Nigerian Head of State General Mohammed Babangida and former Vice President Alhaji Atiku Abubakar.

See video of arrival in Nigeria below

Ur MCM can never till death 😂😂😂pic.twitter.com/csyu4LcgQd