Saturday Night Takeaway and Britain’s Got Talent host Declan Donnelly’s brother has died after being rushed to hospital with a ‘mystery illness’.

Dermott Donnelly, a much loved Roman Catholic priest based in the family’s native north-east, was being treated at North Durham hospital after collapsing in his Newcastle parish.

It’s understood that Donnelly, 55, was ‘extremely unwell’ following the incident, with parishioners urged to pray for his wellbeing during their next congregation.

News of his death was confirmed in statement released on Friday afternoon by the Bishop of Hexham and Newcastle, who wrote: ‘It is with great sadness that I inform you of the death of Fr Dermott Donnelly who died peacefully this afternoon in hospital.

‘This has come as a great shock to all of us.

‘Please pray for the repose of his soul and keep his family, especially his mother, in your prayers at this difficult time. 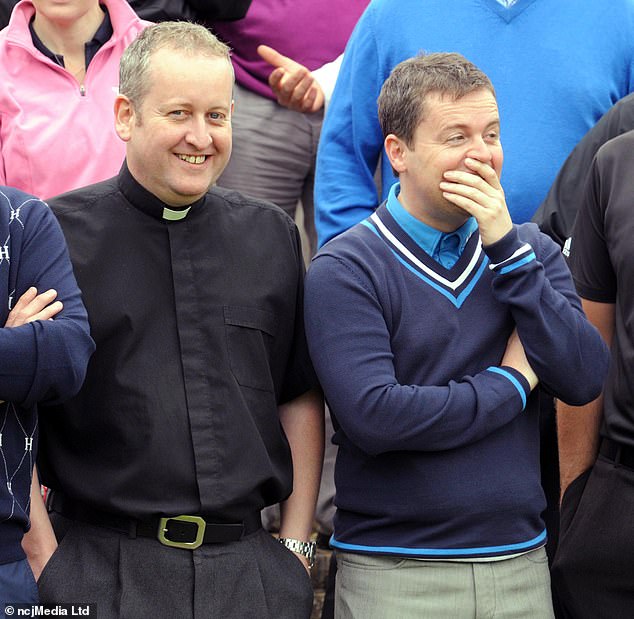 Tragic: The star’s younger brother – a Roman Catholic priest – is ‘extremely unwell’ and was hospitalised after collapsing in a ‘sudden’ incident

Donnelly was a regular visitor to his brother’s traditionally London based shows, while the presenter travelled to the north-east frequently to attend Mass and visit the youth projects which had been a labour of love for the priest since the 1990s.

‘Tomorrow evening between 6pm-7pm there will be a period of time before the Blessed Sacrament so that we can come together as a community in St Joseph’s Church to pray for Father Dermott’s welfare.

‘Please be respectful to Father Dermott and his family at this difficult time, we will update you as and when we receive the most up to date information verified by the Diocese.’

A source told The Sun: ‘Dec arrived with other family members. There are around 12 of them there at the hospital. It was very sudden and everyone is just praying he pulls through.’ 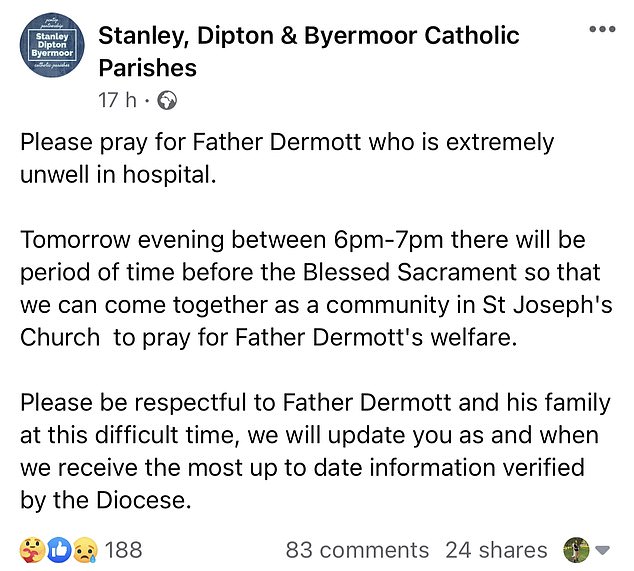 A statement from the Stanley, Dipton & Byermoor Catholic Parishes read: ‘Please pray for Father Dermott who is extremely unwell in hospital’ 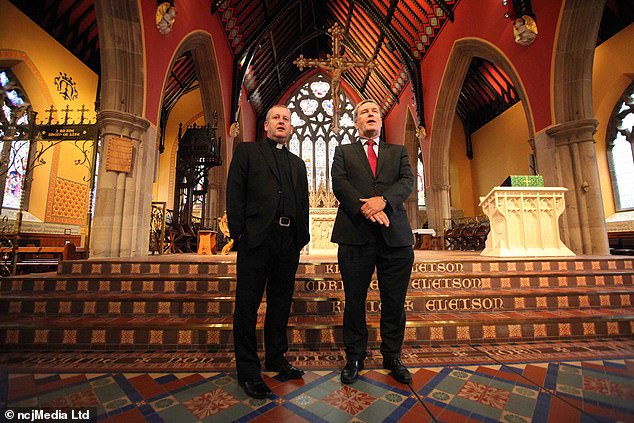 Support: Dermott, 55, is described as being ‘seriously ill’, with his congregation gathering to pray for him

The Priest had started out as a curate in Chester-le-Street until, two years later, he was asked by the Bishop of Hexham and Newcastle to set up a youth programme aimed at introducing disadvantaged youngsters to the Catholic Church.

He transformed the Youth Ministry Team into a thriving concern, and in 2010 launched the Global Youth Village Centre on a former holiday camp in County Durham.

Over a 30 years period he has continued raising money for the youth ministry, building the Emmaus Youth Village and developing youth leaders across the world.

Speaking in 2015, Dermott admitted his connection to household name Dec helps him cross the generational divide with young parishioners.

He said:  ‘I don’t advertise that I’m Dec’s brother, but the kids always seem to know. It bridges the gap between me and them.’

As recently as April he visited outgoing Prime Minister Boris Johnson at 10 Downing Street, where he joined religious leaders including His Excellency the Papal Nuncio and His Eminence the Cardinal and members of the hierarchy of Ukrainian church in the UK to pray for peace in war-torn Ukraine.

He said at the time: ‘It was a real privilege to join Christian leaders from across many churches at Downing Street and to stand together in prayer, the silence was so profound. 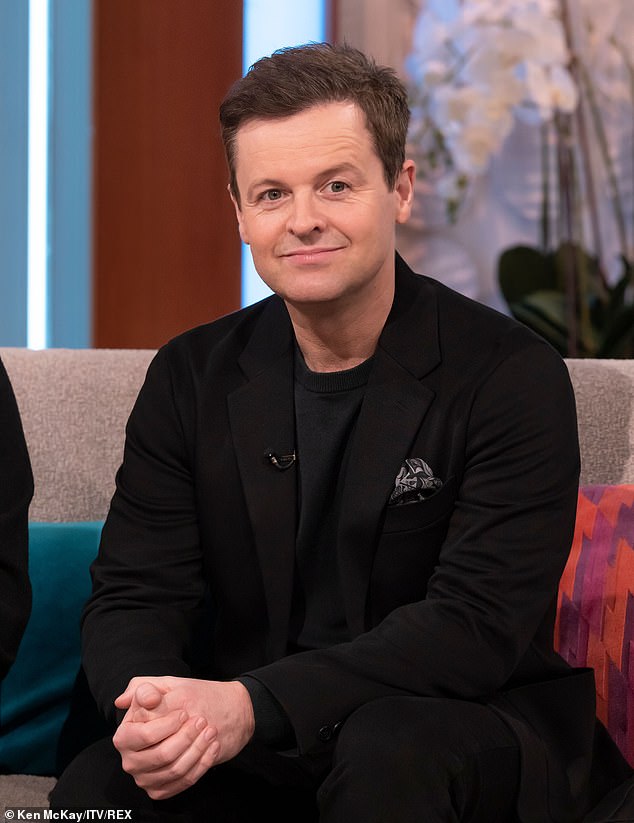 A source told The Sun : ‘Dec arrived with other family members. There are around 12 of them there at the hospital’ 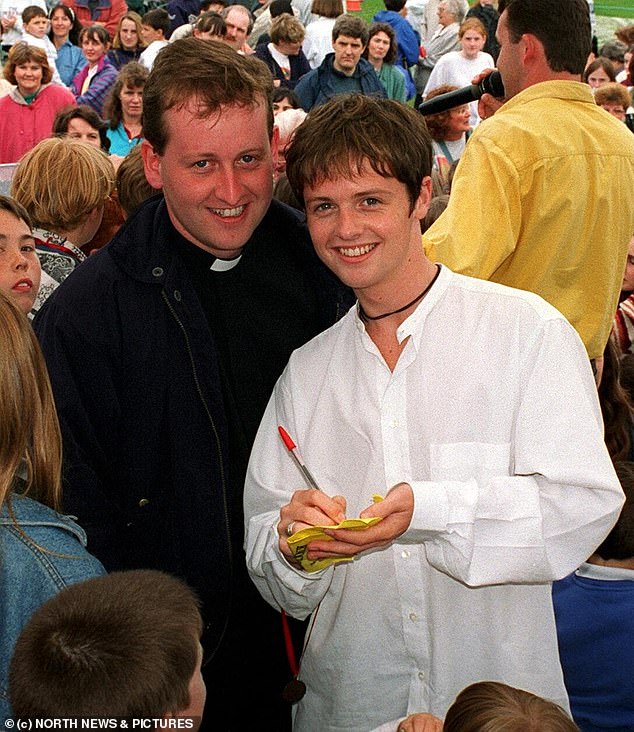 Brothers: Dec, who is eight years younger than his big brother, has previously spoken about his close relationship with his brother

Dec is one of seven children, and was raised on Newcastle’s Cruddas Park estate with three brothers – Martin, Eamonn and Dermott – and three sisters – Camelia, Patricia and Moira.

The millionaire presenter has been able to buy his mother a £600,000 house in the upmarket Darras Hall area of Ponteland, near Newcastle, where neighbours include former England football captain Alan Shearer. 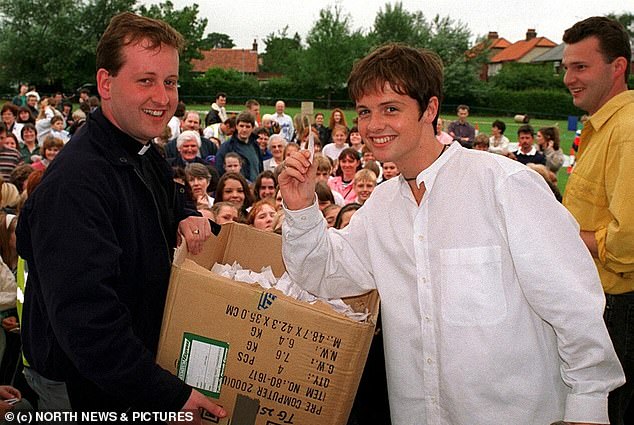 Connection: Dermott is a regular visitor to his brother’s shows, while Declan travels to the North-East frequently to attend Mass and visit the youth projects which have been a labour of love for Dermott since the Nineties