A drink-driver who killed a teenager while trying to avoid a speed camera has been jailed for seven years – prompting an outcry from the victim’s family.

James Biscoe, 21, was three times above the drink drive limit when he ploughed his Fiat Punto into 16-year-old Junior Alexander in Bromley, southeast London, on July 18 last year.

Biscoe hit the youth – who was riding an e-scooter – at nearly 50mph in a 30mph zone while driving on the wrong side of the road in an attempt to avoid a speed camera, the Old Bailey heard.

Judge John Hillen said Biscoe had been drinking with a friend that night.

‘You had hoped to borrow money for a taxi from your drinking companion but he could not help and so you decided to take a risk and drive home.

‘That was the worst decision of your life and a decision which ended with you causing the death of Junior and blighting the lives of those who loved him.’

In addition, Biscoe, of Dartford, Kent, was also disqualified from driving for 10 years and six months. 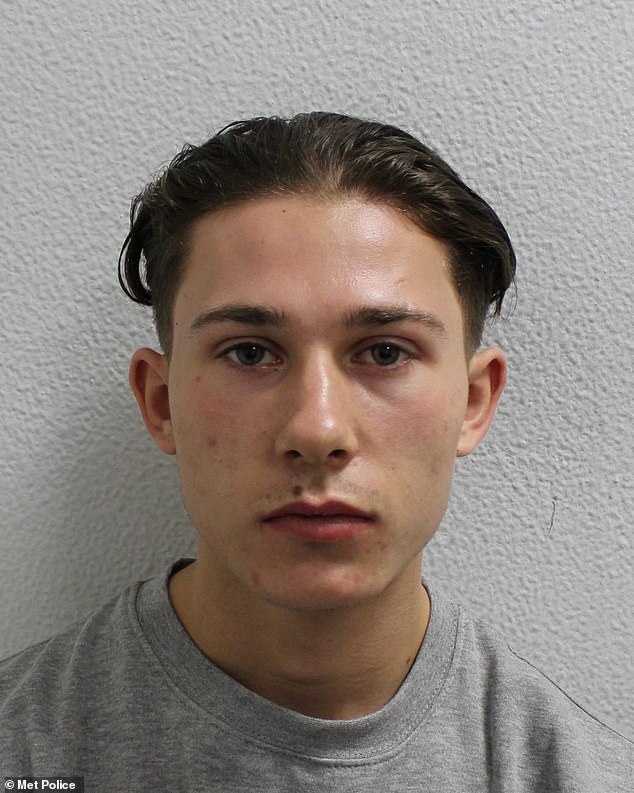 James Biscoe, 21, of Dartford, Kent, appeared at the Old Bailey today where he pleaded guilty to causing death by dangerous driving. He was jailed for seven years

The judge said Biscoe placed his car directly in Mr Alexander’s path when he swerved into the wrong side of the road.

‘You hit him at nearly 50mph causing him to be thrown into the air for some distance before colliding with a tree landing on the pavement, causing terrible injury and ultimately his death.

‘You did not immediately know you hit something but some 10 seconds later you realised you had hit a person and you stopped briefly. You didn’t return to assist Junior, instead you panicked and drove away.

‘To the probation officer you described this as “stupid” and described yourself as a “coward”.

‘Stupidity and cowardice are the mildest ways of describing your behaviour that night.’

Biscoe showed no emotion as he was jailed for seven years but the public gallery went into uproar as Mr Alexander’s parents began crying out at the sentence. 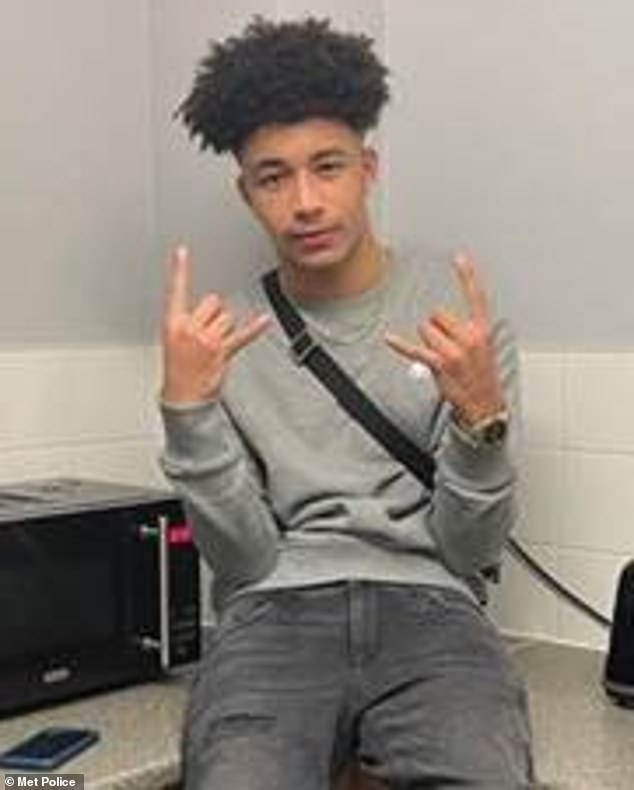 Junior Alexander, 16, was riding his e-scooter in Bromley, southeast London, on July 18 last year when he was struck at 50mph by a fiat punto driven by James Biscoe, 21, on the wrong side of the road 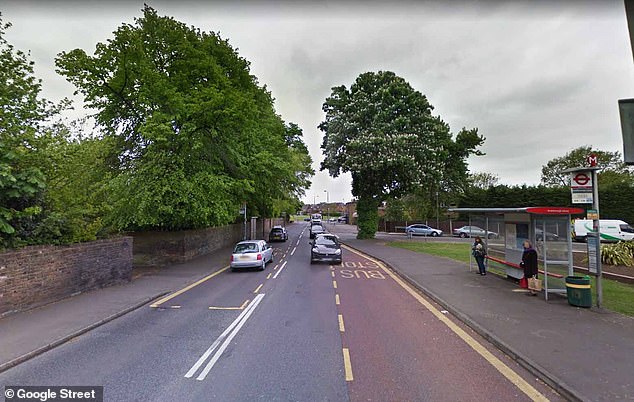 Junior Alexander had been travelling along Southborough Lane in Bromley (pictured) when Biscoe struck him, causing him to collide into a tree as Briscoe fled the scene

Earlier in the hearing, Mr Alexander said his son had aspirations to be a barrister.

He said: ‘It is ironic that we are here today at the Old Bailey…where he would have applied his trade one day. He will never do that now.

‘Because on 18 July in the early hours Junior’s life was taken away by James who is in the dock today.’

Mr Alexander said that the situation could have ‘easily’ been avoided.

He added: ‘[Briscoe] left his body a mangled wreck. All his teeth knocked out of his mouth. His body mangled.

‘And he didn’t even stop to help, [he] just left him there to die on the streets like a dog, a stray dog.

‘He didn’t even stop to notify the emergency services, give my son a chance…’

Donna Lonergan, Junior Alexander’s mother, told the court how she had implored her son not to go out that night, when he told her he needed to drop something off to his girlfriend.

She was awoken at 4am when police knocked at her door and said she began screaming out for Junior. 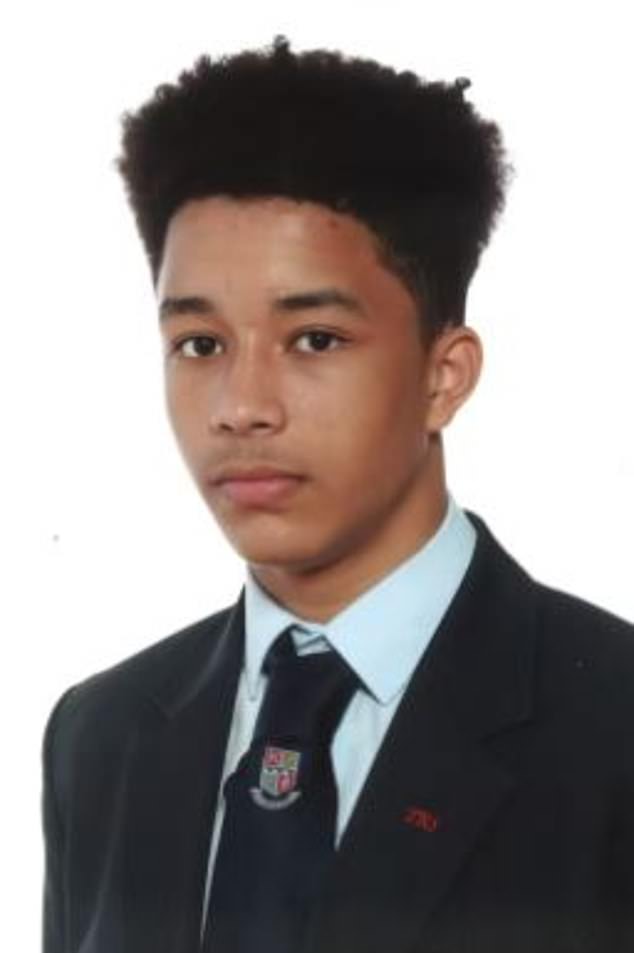 Officers then asked her what colour trainers her son had been wearing.

She said: ‘When I said red, I saw the look in his eyes. He knew it was Junior. And then I knew.

‘I saw my baby lying on a hospital bed with tubes coming out everywhere and blood on his face. His face still looked so perfect. I couldn’t believe he was gone.

‘All his teeth had been knocked out. His beautiful, perfect teeth.

‘The police kept him for so long that we had to have a closed coffin. I had to hug the coffin goodbye. I can’t believe he left my baby alone.’

In a tribute to her son, Ms Lonergan added: ‘Junior was a kind, humble, intelligent, respectful and handsome young man. He was very academic and was aiming to become a lawyer. He was waiting for his GCSE results to choose one of the four offers he was given to go on to further education. He never got to collect his results, the seven high B’s and two A’s, that he worked so hard to achieve.

‘That man killed my innocent son. He made the choice to drive drunk, at speed on the wrong side of the road. He then left him to die alone on the road side. He didn’t even call him an ambulance to give him a fighting chance.

‘Our lives will never be the same, we are broken. The night he brutally killed my son, my heart stopped beating. I love you Junior, you will never be forgotten,.forever by your side. Until we meet again.’

Detective Sergeant Nick Bale, Serious Collision Investigation Unit, said: ‘Junior was a young boy who had his entire life ahead of him when it was cut short in the most awful of ways. The manner of Biscoe’s driving, and the condition he was in at the time, meant that Junior’s injuries were catastrophic. I know that life for his family has never been the same since, and they will continue to grieve for him for many, many years to come.

‘Our thanks go to the members of the public who came to Junior’s aid, and the doctors and nurses who worked so hard to save him. And of course we are grateful to Junior’s family who have been so supportive of our investigation.

‘Biscoe answered no comment during his interview to every question put to him, and attempted to frustrate our work by refusing to disclose the PIN number for his phone. But my team worked meticulously and their efforts left him with no option but to plead guilty.’