Mention San Sebastian to foodies and they’ll go into rhapsodies over the many culinary delights this Spanish port city has to offer.

But while it has more Michelin stars per capita than any other city in the world, bar Kyoto in Japan, there is much more to it than stomach-expanding munching.

For starters, there’s the magnificent vista of the city, set on three beaches, the most impressive of which is the sweeping La Concha, with its mile of fine golden sand.

Dominic Midgley finds that while San Sebastian (pictured) is a city of culinary delights, ‘there is much more to it than stomach-expanding munching’

Walk along La Concha promenade and you’ll see dozens of surfers catching the waves that surge in from the Bay of Biscay, although the biggest curlers are off the eastern beach of La Zurriola.

San Sebastian lies on a floodplain between green hills that once enjoyed the protection of the Castillo de la Mota, a fortress whose original ramparts date back to the 12th century.

But it was not until 1845 when Spain’s Queen Isabella II visited San Sebastian, in the belief that the healing qualities of its seawater would ease her skin problems, that it became a fashionable resort for Madrid’s smart set.

I’m staying just over a mile inland from La Concha at Villa Soro, a meticulously refurbished 25-room boutique hotel, with stylish decor and a fleet of complementary bikes available around the clock.

Apart from the Michelin restaurants, San Seb’s old town has dozens of pintxos bars, the Basque version of tapas. 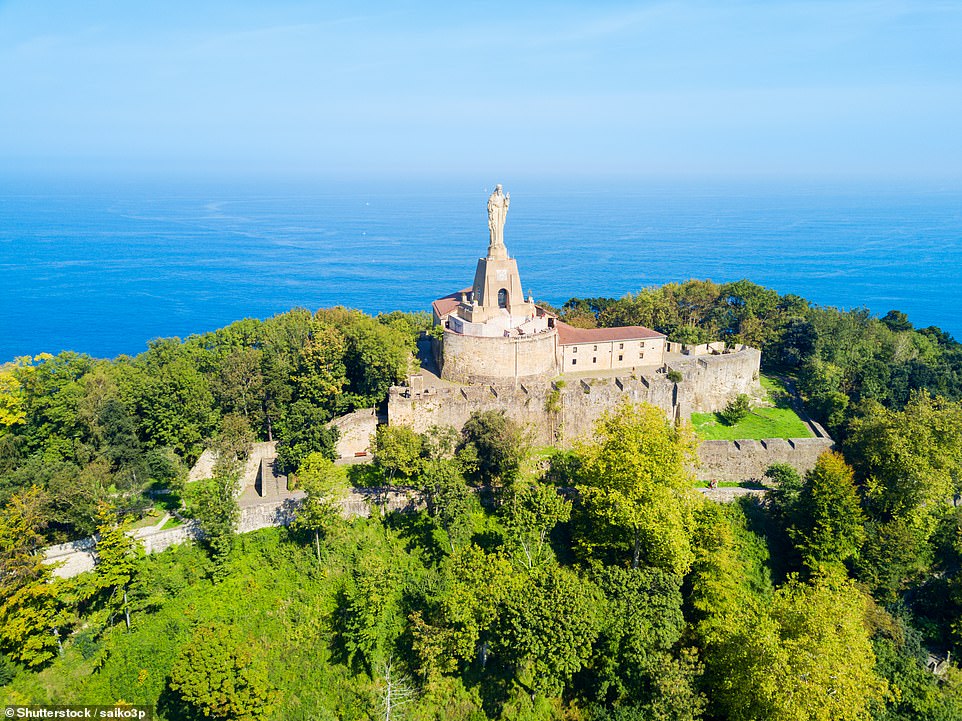 ‘San Sebastian lies on a floodplain between green hills that once enjoyed the protection of the Castillo de la Mota (above), a fortress whose original ramparts date back to the 12th century,’ writes Dominic

Our guide for the evening is Eskerne Falcon, who holds a Masters in ‘gastronomical tourism’ from an American university. First stop is Casa Urola, where we are inducted into the art of cider pouring — and Basque cider is a very different beast to Magners.

It’s so flat that to give it some fizz, you need to pour it into the glass from a height of a good 3ft — not a simple procedure even when completely sober. Once, there were 6,000 cider houses in and around San Sebastian, and even today there are 800.

Regional cuisine has long been a distinctive feature of Spanish cookery and nowhere has a fiercer sense of local identity than the Basque Country. 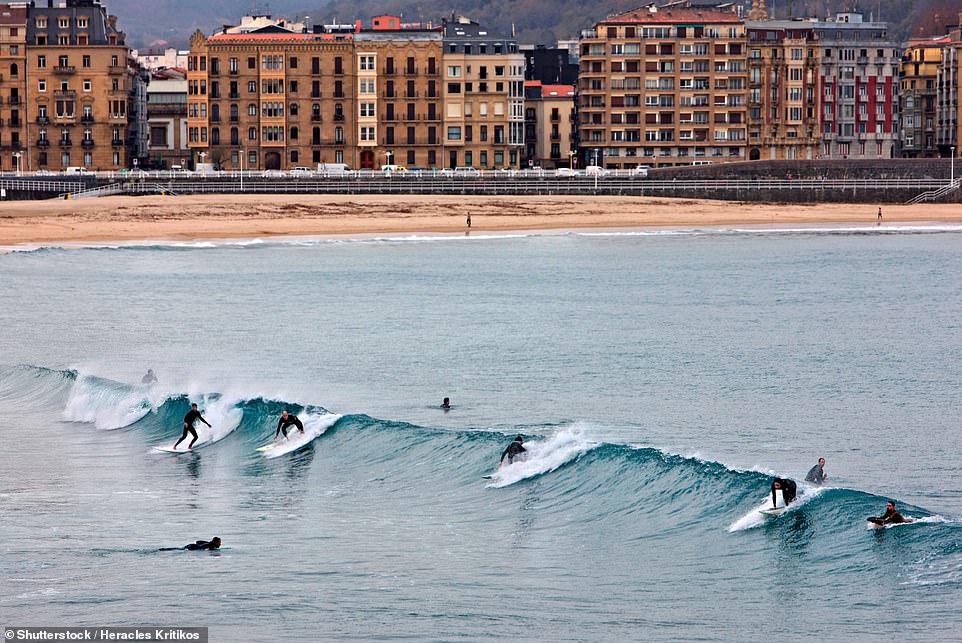 San Sebastian’s beaches tend to attract surfers, with the biggest waves to be found ‘off the eastern beach of La Zurriola (pictured)’ 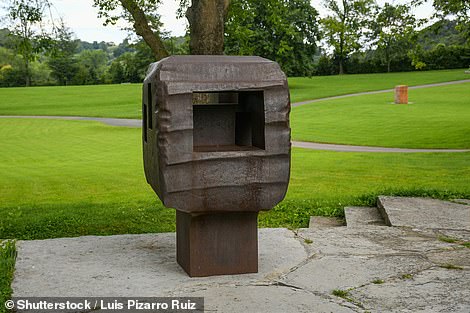 Above is a sculpture at the Museo Chillida Leku, ‘a unique outdoor gallery just 15 minutes outside San Sebastian’

For decades, the paramilitary group ETA waged a violent campaign in pursuit of its aim of gaining independence for the region. But it gave up the armed struggle in 2011, and today support for independence hovers below 20 per cent.

San Sebastian also offers a feast of art. There’s the Museum On Basque Society devoted to the works of two Basque sculptors: Jorge Oteiza and Eduardo Chillida. The latter was Real Sociedad’s goalkeeper in the early 1940s and was tipped to join Real Madrid until a crunching tackle ended his career.

Real’s loss was the art world’s gain. Chillida went on to become a sculptor of global repute, with pieces on display around the world, including at the Unesco headquarters in Paris and the courtyard of the offices of the World Bank in Washington.

The best place to see his work is not at the Basque Museum but at the Museo Chillida Leku, a unique outdoor gallery just 15 minutes outside San Sebastian. 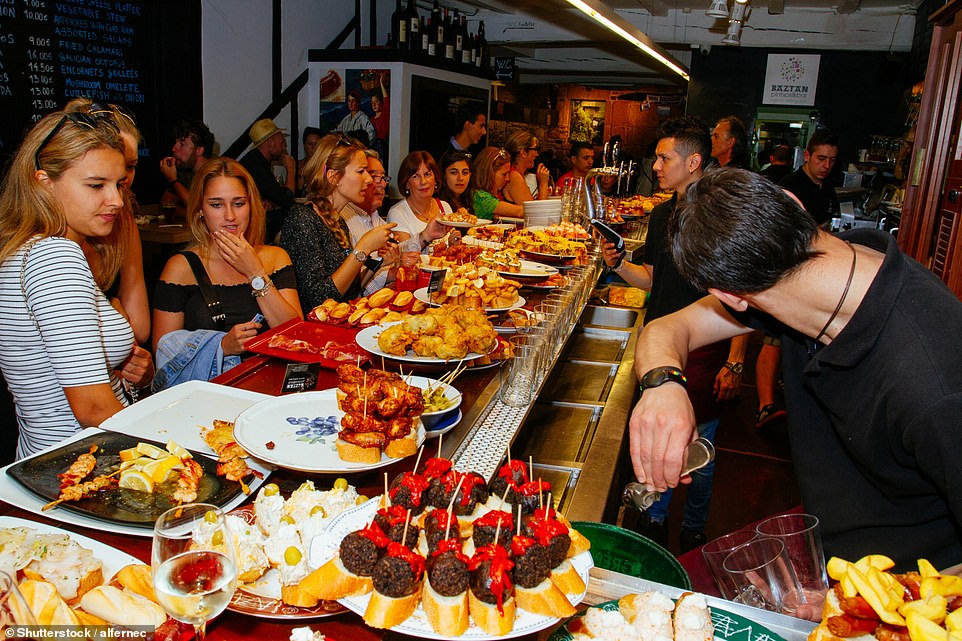 ‘San Seb’s old town has dozens of pintxos bars (one of which is pictured), the Basque version of tapas,’ says Dominic. He learns about the city’s cuisine from his guide Eskerne Falcon, who holds a Masters in ‘gastronomical tourism’

The biggest of the 40 works on display is a 54-ton monster that was originally destined for a site in the British port of Whitehaven.

In 1996, the city fathers of the Cumbrian town invited Chillida to create something in the spirit of his El Peine Del Viento (Comb Of The Wind) sculpture, which is comprised of three iron pieces embedded in rocks on the coast at San Sebastian.

Chillida duly went to Whitehaven, donned oilskins as protection against the foul weather and identified a site.

But his resulting vision proved a little too edgy for local tastes, with one arguing that his proposed design suggested ‘a prototype of the first hip replacement’.

Chillida — known as ‘the man of iron’ — made it anyway and it now stands in the park of the museum he created in the Basque Country.

The work of another local sculptor, Inigo Manterola, occupies pride of place in the centre of the circular lawn at my hotel, where a single line on the room service breakfast menu tells you everything you need to know about its attention to detail: guests ordering boiled eggs are invited to specify not only how many minutes they would like their eggs to spend in the pan but how many seconds, too.

They certainly take their grub seriously in this part of Spain.