Billionaire Elon Musk has been given a seat on Twitter’s board after becoming its biggest shareholder.

In a shock move, Twitter said he will become a director, giving him influence over strategy and direction – just a day after Musk revealed he has taken a 9.2 per cent stake.

Shares in Twitter rose 2 per cent in New York after soaring 27 per cent on Monday – the biggest one-day rise since its debut in 2013. 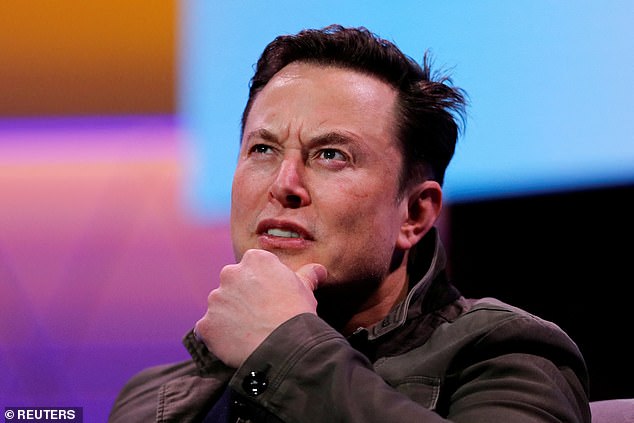 Buying in: Tesla boss Elon Musk is to become a director at Twitter after taking a 9.2% stake in the social media giant

Chief executive Parag Agrawal said: ‘Through conversations with Elon in recent weeks, it became clear to us that he would bring great value to our board.

‘He’s both a passionate believer and intense critic of the service which is exactly what we need on Twitter to make us stronger in the long-term. Welcome Elon!’

Musk responded: ‘Looking forward to working with Parag and Twitter board to make significant improvements to Twitter in coming months!’

Jack Dorsey, the co-founder of Twitter, said he was ‘really happy’. ‘He cares deeply about our world and Twitter’s role in it.

Parag and Elon both lead with their hearts, and they will be an incredible team.’ Musk’s investment followed his criticism of Twitter’s approach to free speech last month, after he said he was giving serious thought’ to building a social media platform.

His stake is considered a passive investment but analysts believe his ultimate aim is to buy the company outright despite agreeing not to acquire more than 15 per cent of Twitter while a company board director. His term ends in 2024.

Neil Wilson, analyst at Markets, said: ‘No way is this passive. He is annoyed at the Twitter algorithms, the censorship and he wants to change it.

‘He has built his stake and he’ll make an offer in the next few years. He did the same thing with Tesla. He was not the founder.’

In the first sign that he plans to shake things up, Musk took to Twitter yesterday asking his 80million followers, ‘Do you want an edit button?’

Many users feel such a function is overdue to prevent some of the hateful content. But Twitter has been resistant, defending its libertarian commitment to free speech.

Adding an edit button could mirror Facebook’s initial rollout, giving users a window of a few seconds in which to change a message and remove misspelled words.

Wilson added: ‘Twitter has always been reluctant to do this. The next move after an edit button would be hiring an army of editors to monitor the platform.

‘This would come at a huge cost.’

Danni Hewson, a financial analyst at AJ Bell, said: ‘Once again Elon Musk was a hot topic of conversation. But there’s maverick and then there’s a loose cannon, and Twitter investors might be wondering exactly which Musk will be sitting at the table, how great will his influence be, and how closely will regulators be watching?’

Musk’s history on the platform has been controversial and involved a battle with US regulators.

Having tweeted that Tesla had ‘funding secured’ to take it private, the regulator enforced a penalty and condition that a company lawyer approves Musk’s Twitter messages about Tesla’s finances.

A recent filing shows Musk is trying to overturn this ruling.