Supermodel Emily Ratajkowski stepped out onto the New York City streets Tuesday for the first time since it was revealed she is planning to divorce her film producer husband. The model seemed at ease as she strolled with her 16 month old son, who she shares with her husband.

Ratajkowski and Sebastian Bear-McClard had apparently been planning to split for a while, and sold their three-bedroom home on Valentine Street in Los Angeles last month – weeks before she posted pictures without her wedding ring on.

The model, 31, reportedly made the decision to leave her husband, 41, following the claims of his infidelity, but is said to be coping well.

A source close to the star confirmed the news of their separation to PEOPLE, and said Emily is focusing on parenting the couple’s son Sylvester.

They said: ‘They split recently. It was Em’s decision. She is doing okay. She is strong and focused on her son. She loves being a mom.’

The unnamed source also said Ratajkowski plans to file for divorce, but paperwork has not yet been filed.

Their split comes after a source told Page Six on Friday that Sebastian is a ‘serial cheater’, saying: ‘Yeah, he cheated. He’s a serial cheater. It’s gross. He’s a dog.’

Comedian and social media influencer Claudia Oshry also chimed in on the situation in Thursday’s episode of The Morning Toast podcast, in which she claimed Bear-McClard’s infidelity was an open secret and confirmed that Ratajkowski intends to divorce him.

‘It’s, like, known that her husband has cheated on her and they’re filing for divorce,’ Oshry said, adding that when the couple officially confirms their separation, it should not come as a surprise to anyone.

The model seemed at ease as she carried her 16-month-old son, Sylvester, around town amid excessive heat in the Big Apple 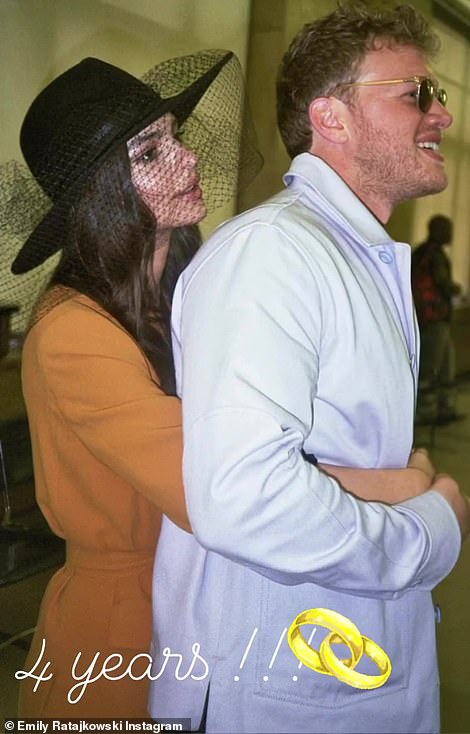 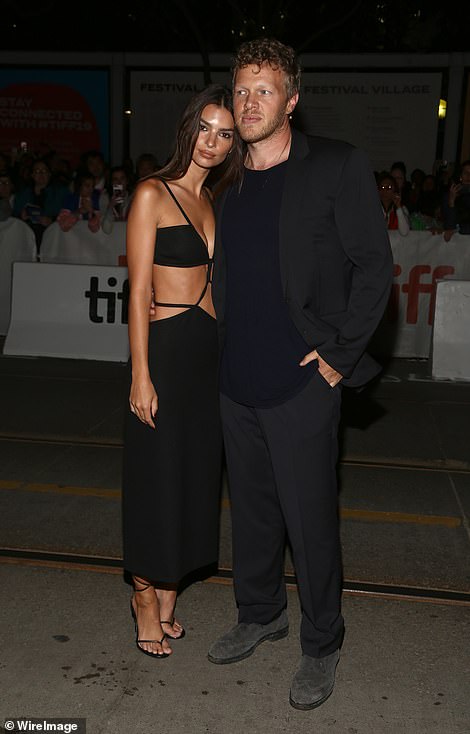 Ratajkowski and Bear-McClard, 41, have been married since 2018, but Ratajkowski is said to have made the decision to divorce him over his infidelity

Ratajkowski was seen Tuesday carrying Sylvester, who wore a light blue shirt, shorts with matching blue shoes and a white and yellow sun hat as he sucked on his thumb.

She donned a white baseball cap with a red lid, a black halter top and a black skirt with white sneakers and socks as she walked around the city in record-setting heat.

Neither Ratajkowski nor Bear-McClard have commented publicly on the news of the break-up, but Ratajkowski has apparently been signaling for the past few days that the two were done.

The fashionista has appeared without her wedding ring a number of times as of late, including in her latest TikTok video, where she’s seen dancing around in a white crochet top and denim shorts.

The brunette beauty also recently shared a nude selfie that showed both her hands and no wedding ring.

And the star did not post any public Father’s Day wishes to her husband of four years last month, though she did mark their fourth wedding anniversary on Instagram in February, with various throwback photos.

Her big diamond sparkler was last visible on her hand in photos she shared to her Instagram in early June.

Meanwhile Bear-McClard was seen still wearing his gold band on his finger while he was spotted sitting on a bench outside of celebrity hotspot, Cafe Cluny, in New York City on Wednesday.

The fashionista has appeared without her wedding ring a number of times, including in her latest TikTok video 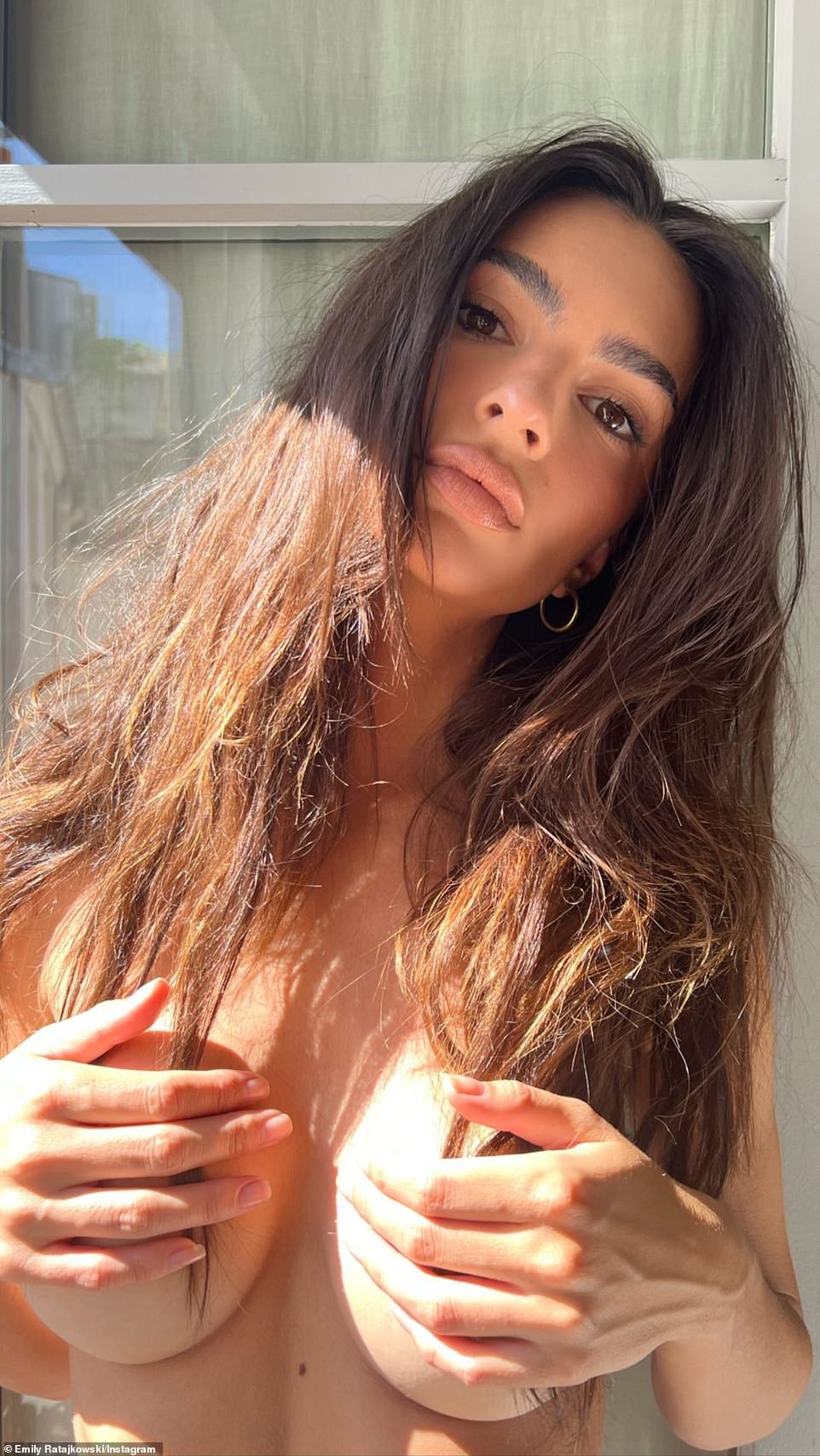 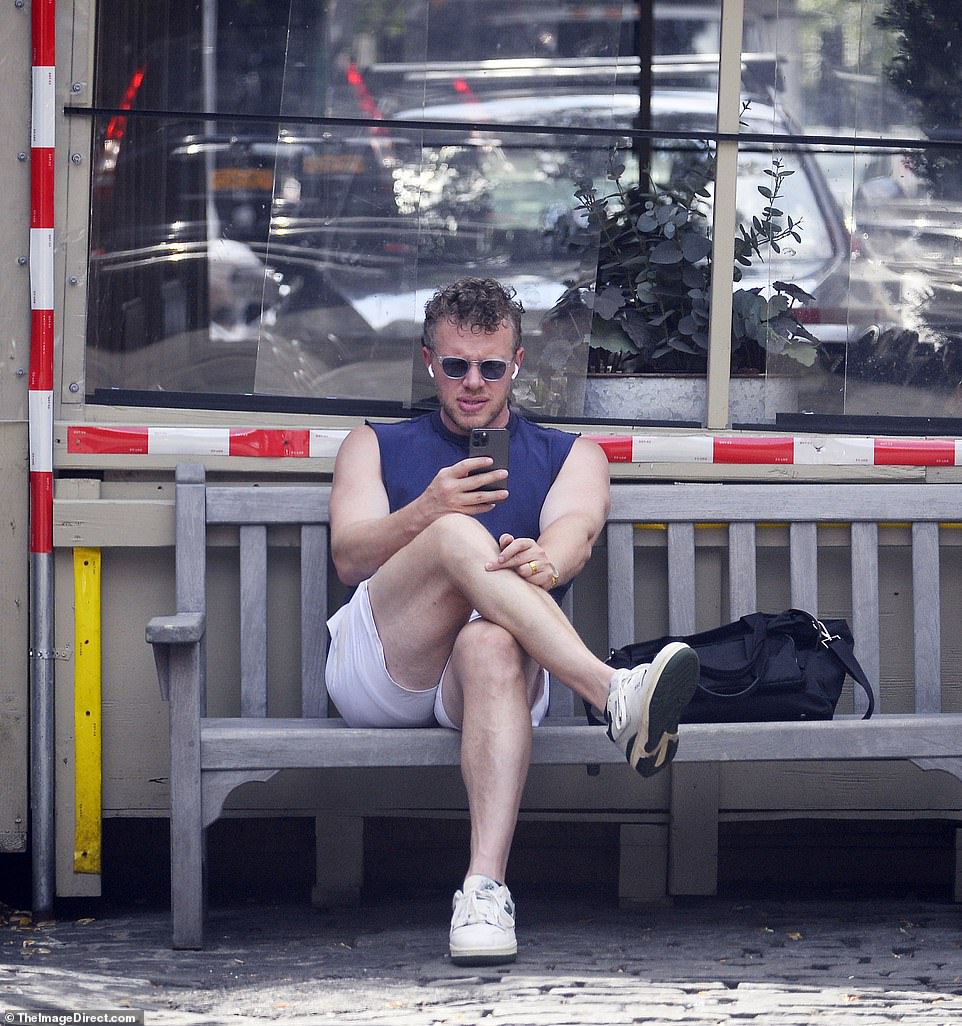 Meanwhile, Bear-McClard was seen still wearing his gold band on his finger while he was spotted sitting on a bench outside of celebrity hotspot, Cafe Cluny, in New York City on Wednesday

The 1,650-square-foot three bedrooms and three bathroom house in Echo Park was built in 1946 and has since been fully remodeled. It’s located behind a gated double lot at the end of a cul de sac, ensuring plenty of privacy.

In the living room is a 15-foot brick fireplace, and there is also a custom kitchen and views of the woods.

The house also includes a separate cottage that is connected to the main house by an open breezeway, and the yard has a private wrap-around garden, a hot tub, a gas fire pit, and a succulent garden.

Ratajkowski and Bear-McClard bought the home for $2 million in May 2018, just months after they got married in an intimate ceremony on February 23.

It is unclear who the home was sold to. 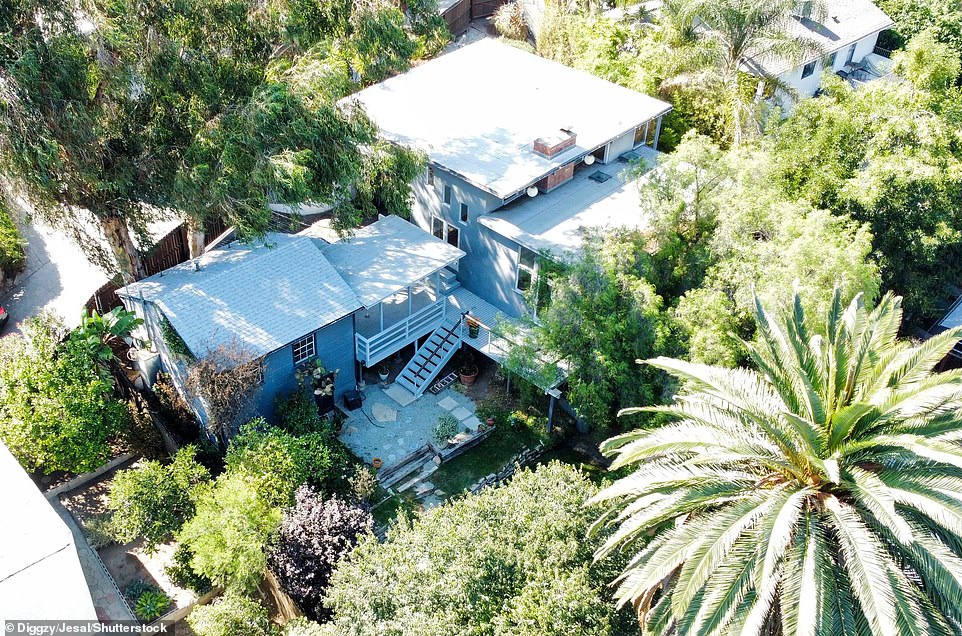 The couple apparently sold their Los Angeles home (pictured) for $2.45 million on June 15, weeks before rumors that the two were splitting up arose 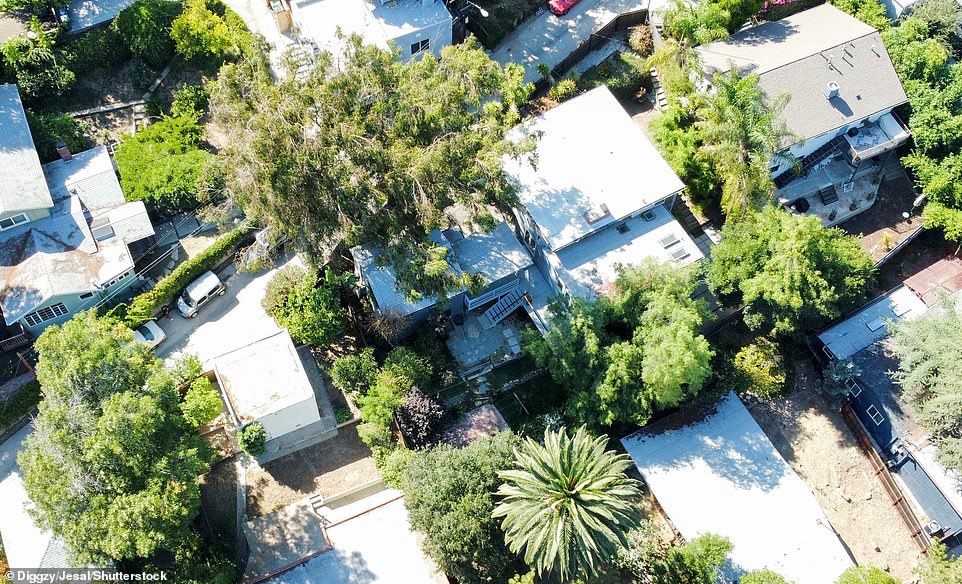 They bought the 1,650-square-foot three bedrooms and three bathroom house in Echo Park for $2 million in May 2018, just months after they got married in an intimate ceremony on February 23 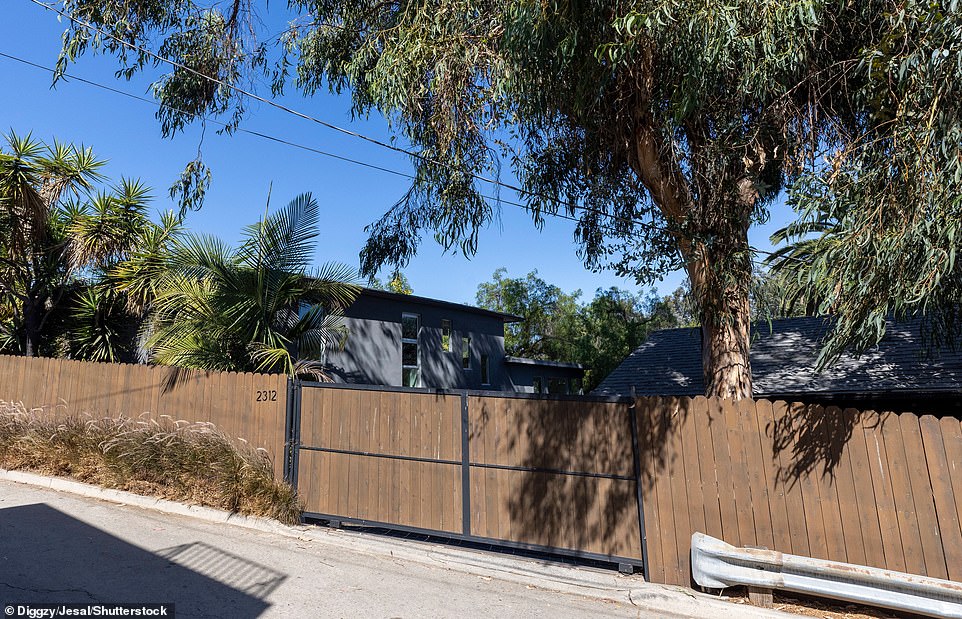 The home is located behind a gated double lot at the end of a cul de sac, ensuring plenty of privacy 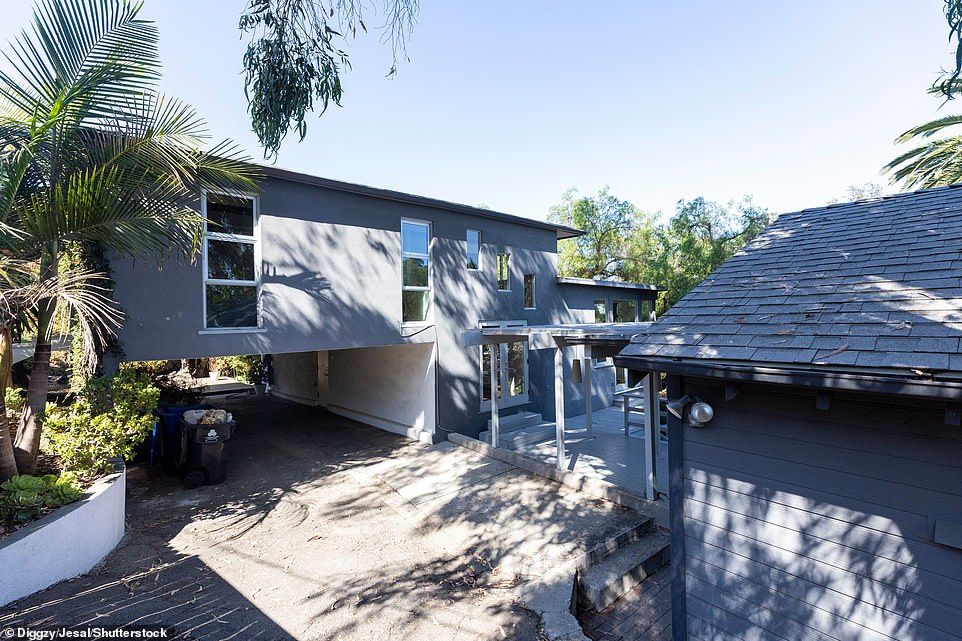 The house includes a separate cottage that is connected to the main house by an open breezeway, and the yard has a private wrap-around garden, a hot tub and a gas fire pit 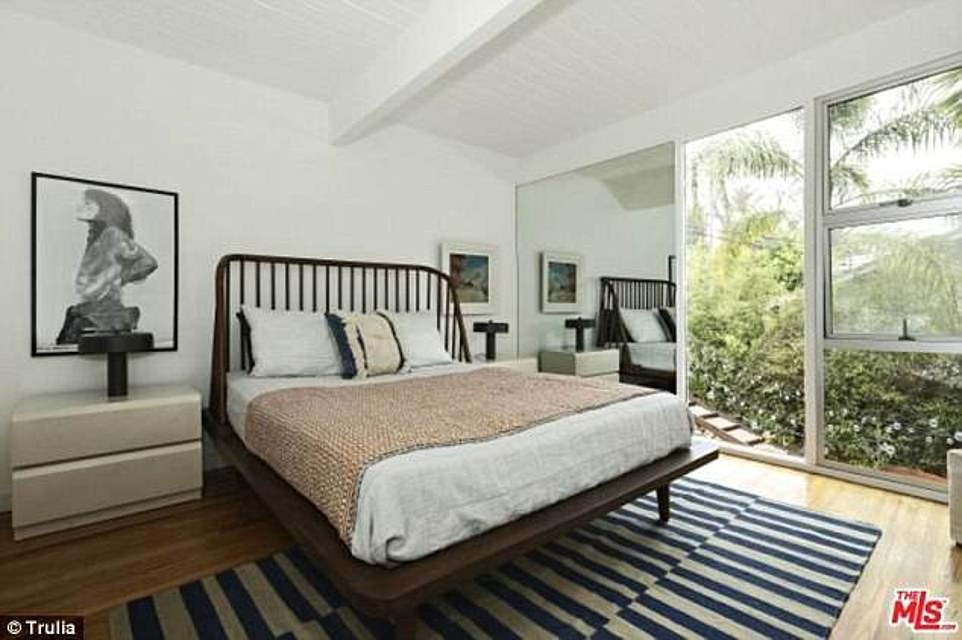 The 1,650-square-foot three bedrooms and three bathroom house in Echo Park was built in 1946 and has since been fully remodeled. One of the bedrooms is pictured before the celebrity couple bought the house 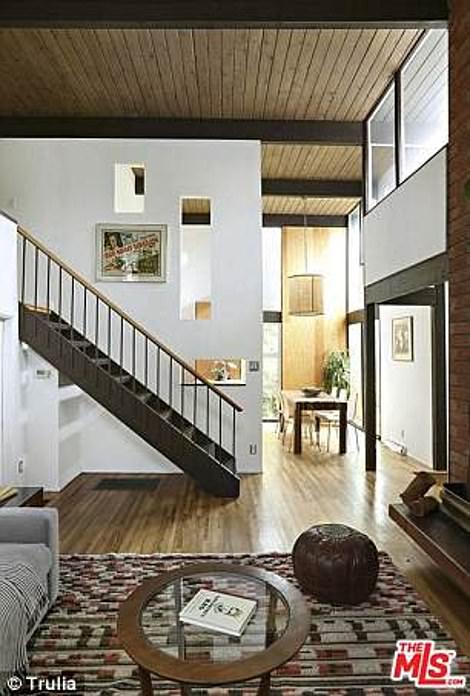 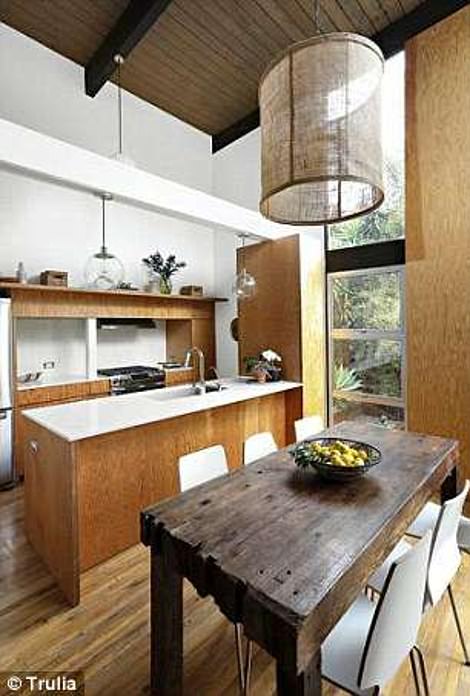 The house features a ‘custom kitchen’ with wood cabinets and accents, as well as a fireplace in the living room 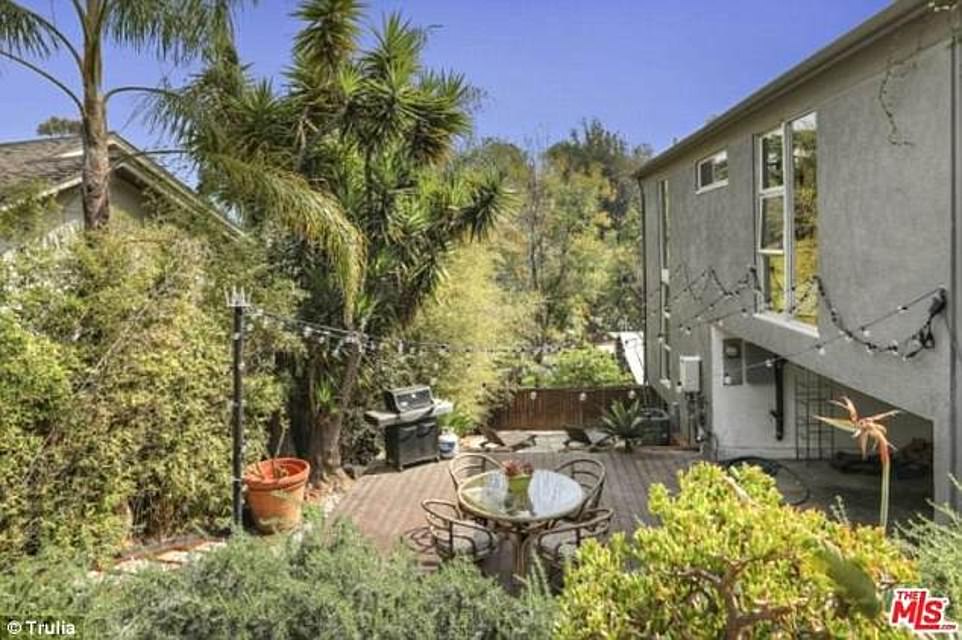 The yard has a private wrap-around garden with plenty of greenery, a hot tub and a gas fire pit

The Inamorata founder and Sebastian first started dating on Valentine’s Day in 2018 and were married in a civil ceremony in New York City just a few weeks later.

‘Soooo I have a surprise,’ Ratajkowski captioned an Instagram slideshow at the time. ‘I got married today.’

The post included a series of pictures of her with her new husband, including one where he could be seen kissing her cheek and sporting two gold rings that read ‘EM’ and ‘RATA.’

Over the next few months, Ratajkowski would criticize naysayers who thought she and Sebastian got married too soon after she called off another engagement.

‘People came after my marriage, like, “Wow. I give it three weeks.” I’m like, “What?”‘ she told Marie Claire.

‘No one can take women seriously on any choices that they make, especially if they’re unique to them and they don’t play into the way we think women should get married. It’s a constant writing-off.’ 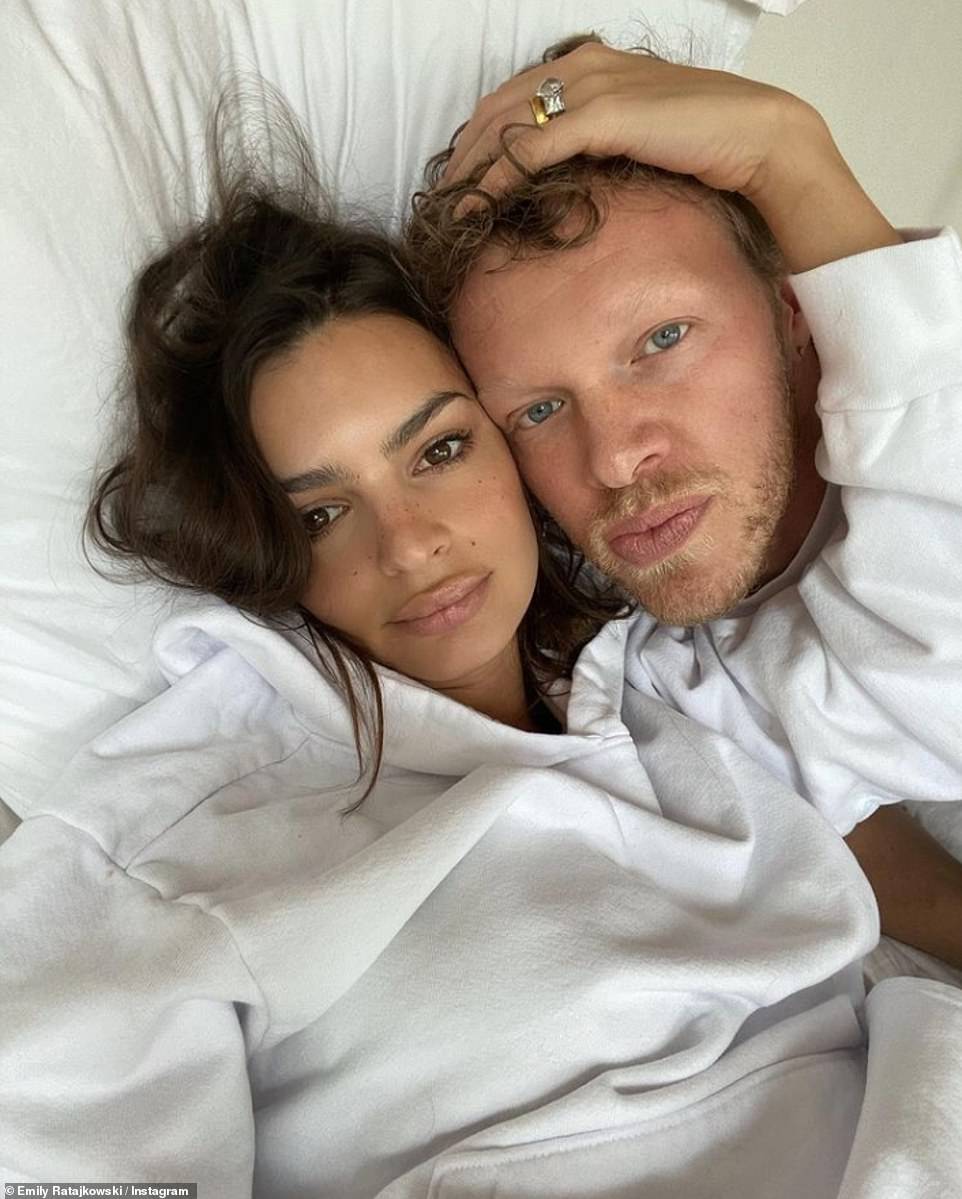 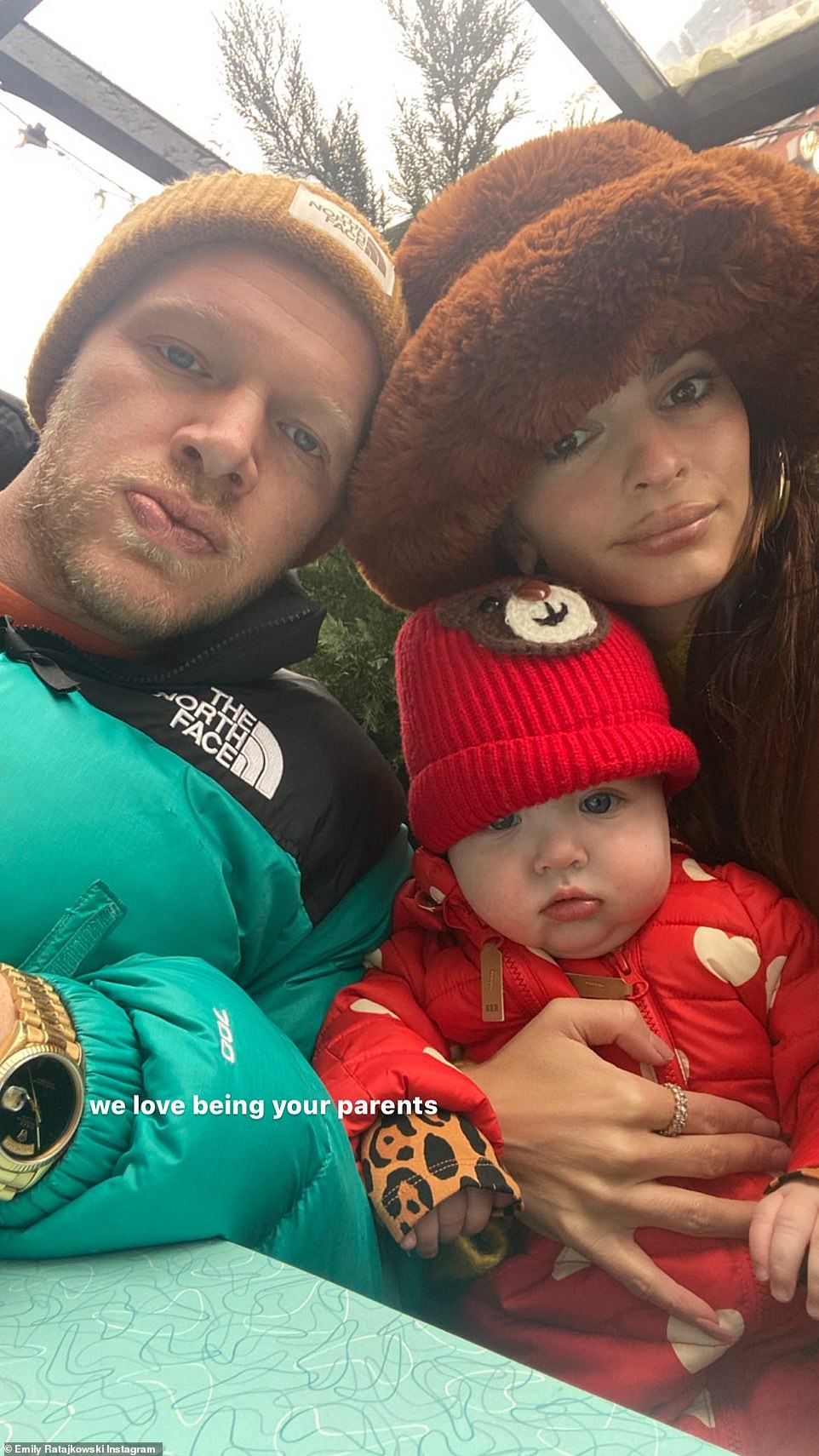 They announced they were expecting a child two years into their marriage, and welcomed their son, Sylvester, into the world on March 8, 2021 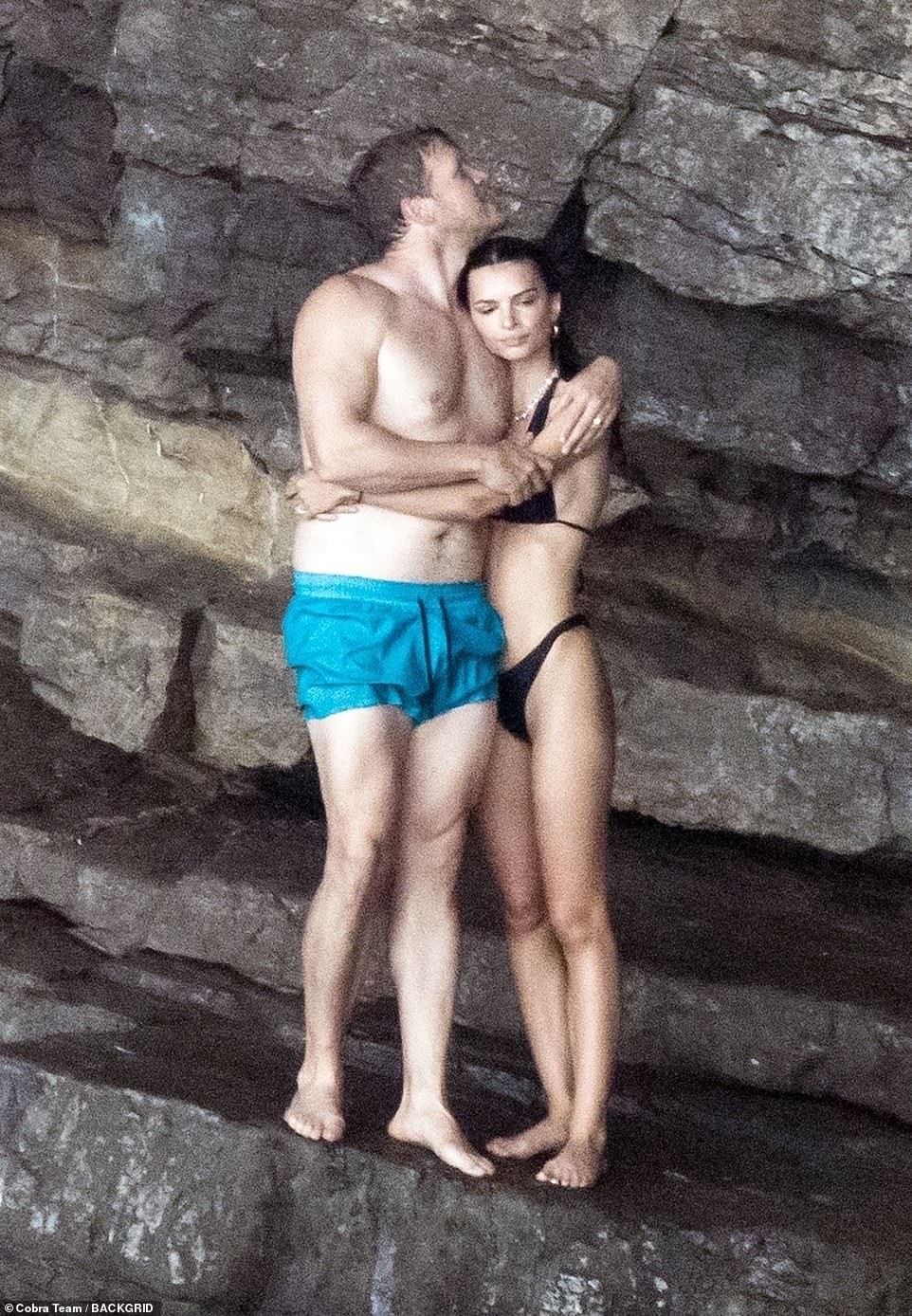 Emily and Sebastian were last spotted together mid-June while on vacation in Italy, and seemed to be having fun

The couple made their red carpet debut less than two weeks after their intimate wedding ceremony at the 2018 Film Independent Spirit Awards, with one unnamed source telling E! News: ‘Emily looked so in love with her husband. She kept staring at him, smiling and was touching his face a lot.

‘Emily rested her head on his shoulder and looked truly happy,’ the unnamed source said.

Another unnamed source later told Us Magazine in March 2018 they had known each other ‘for years’ before they started dating.

‘They were all in a friend group,’ the insider said. ‘He wasn’t a stranger.’ 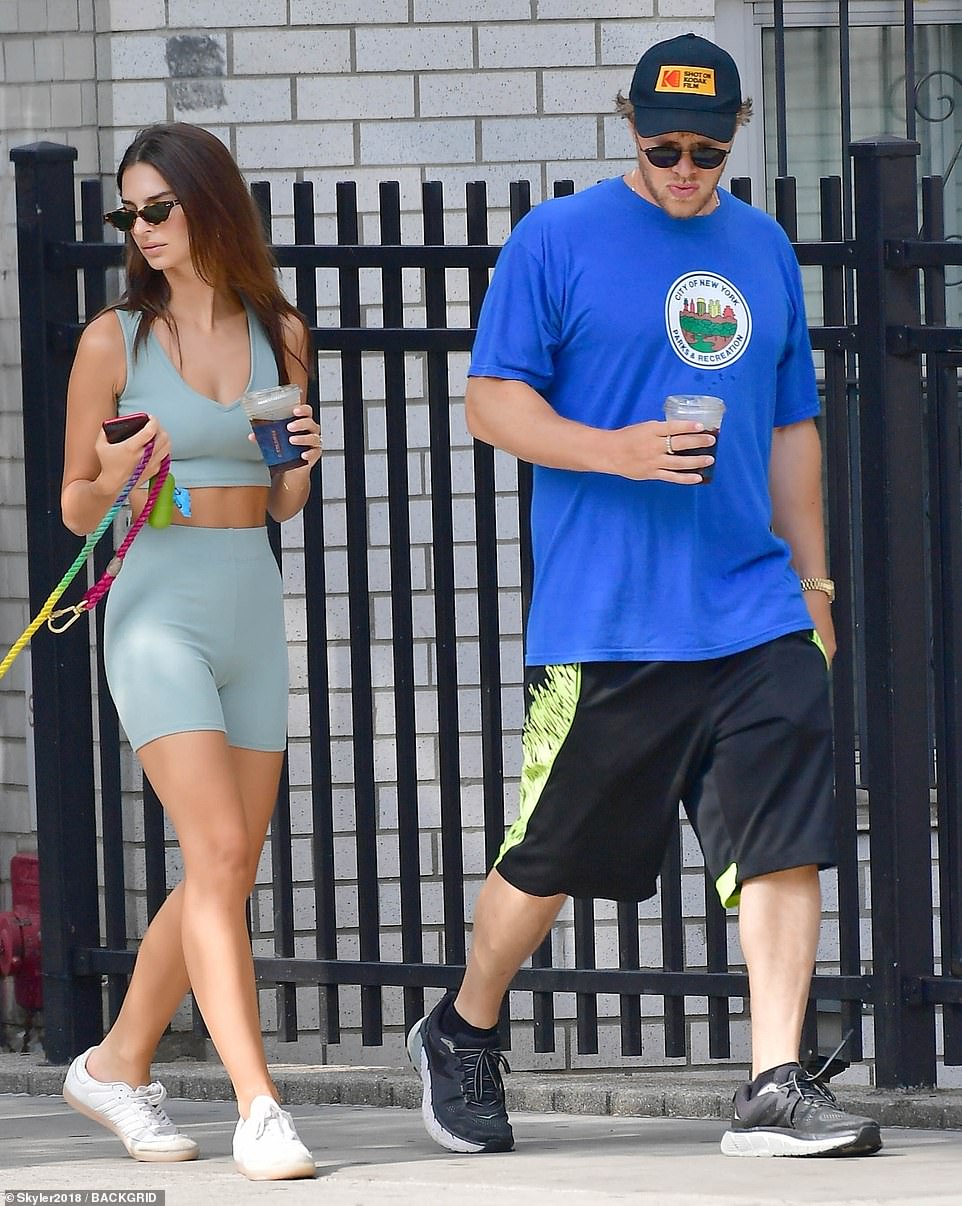 After the two got married, Ratajkowski denounced naysayers who said they were moving too fast after she called off a previous engagement. The two are pictured walking in Brooklyn, New York in July 2019

On Twitter, many people seemed shocked to hear of Bear-McClard’s alleged infidelity to Emily Ratajkowski

Two and half years later the couple announced they were expecting a baby. They welcomed their son into the world on March 8, 2021.

Emily and Sebastian were last spotted together mid-June while on vacation in Italy, and appeared in good spirits as they relaxed on Porto Ercole beach together.

The couple was also among the many celebrity guests at Ari Emanuel’s wedding to Sarah Staudinger in St. Tropez in late May.

All seemed well with the pair on Monday, May 23, when they were spotted touching down in Nice ahead of the Cannes Film Festival. Ratajkowski even lovingly adjusted Sebastian’s sunglasses while at the airport.

‘I don’t know what rumors and tabloids are true or not, but how does any man cheat on @emrata???’ one user asked, using Ratajkowski’s Twitter handle. ‘Like she’s a damn near perfect woman.

‘Forget the obvious beauty. She’s brilliant. She’s a good person with strong political beliefs. It doesn’t get any better than her.’

Another Twitter user said: ‘Cheating on Emily Ratajkowski is BOLD. How did he even find somebody to cheat with?’

And @ladixie69420 tweeted, ‘Emily Ratajkowski got cheated on… there’s no hope at all’ – a sentiment apparently shared by Sarah Sicard, a senior editor at the Military Times, who wrote: ‘If men will cheat on Emily Ratajkowski, what hope do the rest of us mere mortals have?’