The once-abandoned protests to end the operations of the Special Anti Robbery Squad (SARS) of the Nigerian Police Force has resumed on Saturday, February 13th.

The resumption of the EndSARS protests come after the Lagos State government announced that the Lekki Tollgate is set to resume for business.

Nigerian youths are not happy with the decision and have decided to protest for justice given that people were killed at the Tollgate protests in October. 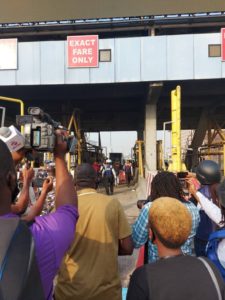 At the protests today, popular Nigerian comedian Mr. Macaroni has been arrested by the Police who are heavily concentrated at the Lekki Tollgate and put him in the Black Maria.

See reactions to the Lekki Tollgate protests below

Police are already beating, abusing & arresting protesters or passerby at the #Lekkitollgate as easily as 8am with the whole world watching, and this government want us to believe they had nothing to do with the massacre?? #EndSARS

So the armed police and LCC staff at #LekkiTollGate are arresting anyone on sight whether you are a protester or not, straight into a Black Maria and moved to an unknown location. Whatever happened to the fundamental right of peaceful gathering?

To everyone who would be participating in #Lekkitollgate and #EndSARS movement today, I pray that NIGERIA would not END you.

What is the use of having laws if the Police can simply choose to ignore that “peaceful protests are a constitutional right”, and instead beat up protesters, respond with force and even take protesters away in a Black Maria. Disgraceful and illegal acts #Lekkitollgate #EndSARS