NYC Mayor Eric Adams has been branded a hypocrite after his administration fired a mom who protested against him – even though he used to regularly rail against his bosses at the NYPD.

The mayor’s own track-record of insubordination has re-emerged after former NYC Law Department Attorney Daniela Jampel, 38, was fired on Monday.

Mom-of-three Jampel was booted just 30 minutes after confronting Adams about his refusal to lift masking rules for under-5s at a press conference.

Sources close to Jampel, who was on maternity leave at the time of her dismissal, insisted she did not pose as a reporter, as alleged, and says her dismissal was not related to her performance at work.

But the tactics that landed her in trouble will have been familiar to Adams, who regularly took aim at the New York Police Department during his 22 year career there.

He held frequent press conferences to slate the NYPD’s handling of issues including police brutality against black people, and the department’s failure to diversify.

Unlike Jampel, Adams was still allowed to end his career on his own terms, and retired in 2006 having attained the rank of captain. 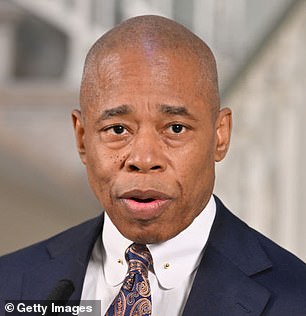 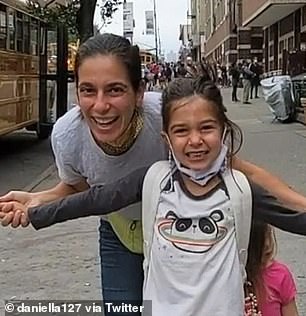 Eric Adams, left, has been branded a hypocrite over the dismissal of NYC city lawyer Daniela Jampel, right, after she confronted him at a press conference – despite the mayor regularly blasting his own bosses during his 22 year career at the NYPD

And that hypocrisy rankled at least one New York parent whose family is affected by the ongoing under-5’s mask mandate.

The parent, who did not wish to be named, told DailyMail.com: ‘Eric Adams is demanding that no one disagrees with him but has conveniently forgetting the very many times he publicly humiliated the NYPD when he was a cop.

‘And he was probably right to do so.

‘Very much like this poor mother who is simply and bravely standing up for the rights of her kids and New York’s youngest kids not to be muzzled by unnecessary and harmful masks in day-care.

‘Hypocrisy is not a strong enough word to describe the way this playboy mayor is dealing with her.

‘He should give her job back now, apologize and get back to running this city for the residents, many of whom will be regretting voting for him.

‘But I very much doubt his supermodel friends at the swanky parties he attends will bring the subject up with him so he can pretend the problem doesn’t exist – which is why it is so vital that people like Jampel stand up to him and tell him in no uncertain terms to remove the masks that do not protect kids and are harming their development.’ 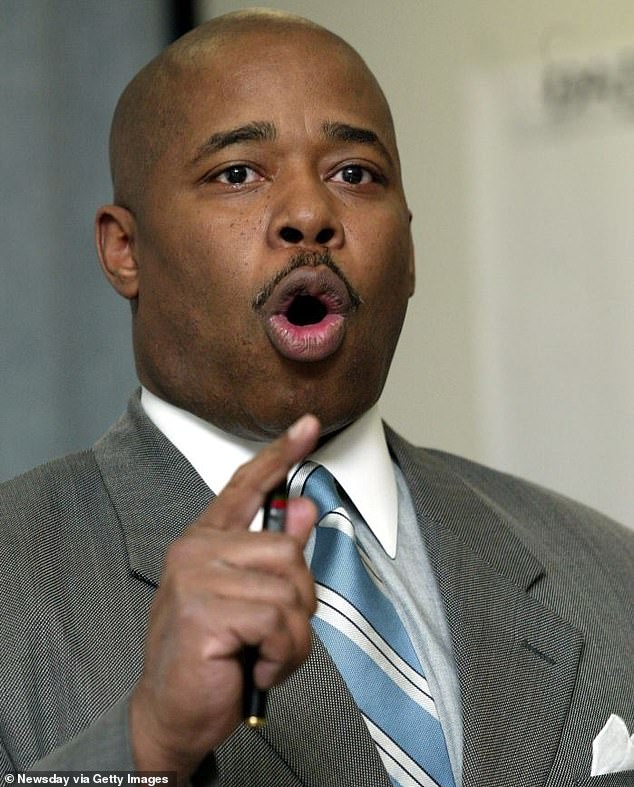 Adams is pictured in 2004 at the launch of a report by the 100 Blacks in Law Enforcement Group, which blasted his then NYPD bosses for failing to diversify the force 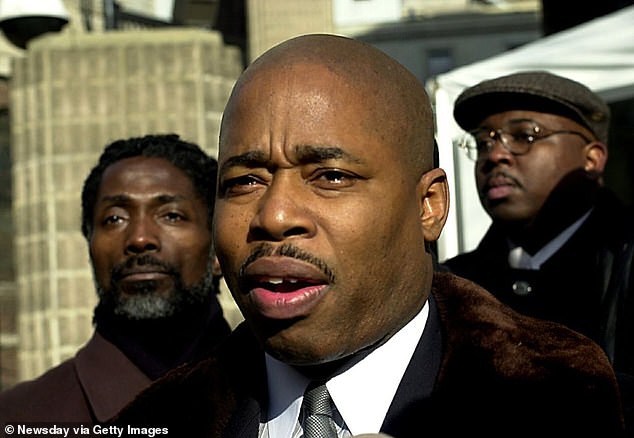 Adams is pictured attacking Manhattan’s district attorney in 2000 over the decision to let white collar drug buyers off with a slap in the wrist, saying the city’s prosecutors would have meted out far harsher punishment to black drug buyers

Adams joined the NYPD in 1984 after graduating second in his class at police academy, and forcefully disagreed with a chief in October that year about a controversial case.

He clashed with the boss, who said a sergeant had been justified in shooting a mentally-ill, disabled black woman called Eleanor Bumpurs, and insisted Bumpurs would be alive had she been white.

Adams’ friend David C Banks told the New York Times the interaction saw the future mayor become a ‘marked man’ in the department, and likely stopped the clever cop from rising to the highest echelons of the force.

But that didn’t stop him from engaging in further activism. Having joined the Guardians Association of black cops on joining, Adams later rose to become leader of the organization, which is formally-recognized by the NYPD.

During the 1990s, he warned that arresting teens for low-level offenses would ultimately backfire, and that such policing would disproportionately target black and Hispanic New Yorkers.

Adams also began speaking out against racism experienced by black cops and said many were fearful of being mistaken for criminals when out of uniform.

In 1995, Adams helped form 100 Blacks in Law Enforcement Who Care, a police pressure group not formally recognized by the NYPD.

He proceeded to become even more outspoken, railing against the shooting of a Bronx man named Amado Diallo, and blasting the department over what he said was its excessive use of stop-and-frisk.

In the early 2000s, Adams devised a report card that graded the NYPD on issues pertaining to racial equality. But his superiors claimed much of Adams behavior was linked to his desire to launch a political career, rather than borne of a hunger to reform the department.

Further drama erupted in 2005, when Adams claimed the NYPD had deliberately-timed news of a terror plot to let then Mayor Michael Bloomberg skip an election debate.

Adams was subsequently found guilty of speaking without authorization at a disciplinary hearing, and docked 15 days of vacation pay.

The incident prompted him to retire, shortly before he successfully ran for New York’s State Senate.

He began to center himself as a pro-police moderate during his mayoral campaign last year, and has taken a more centrist approach than his progressive predecessor Bill de Blasio. 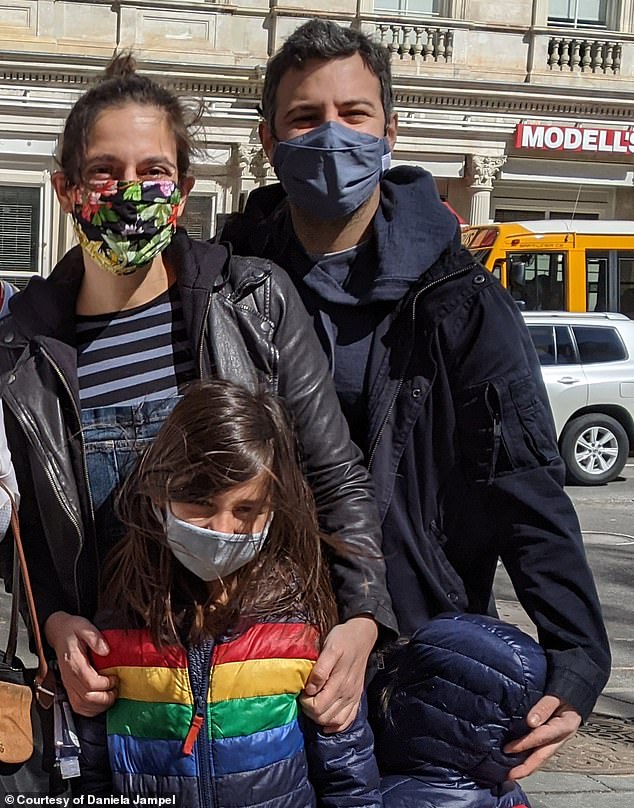 Jampel, pictured with her partner and two of her children, is a mom-of-three who now finds herself unemployed for using similar tactics to those deployed by Adams. She has been vocally-outraged over the delay in lifting mask mandates for under-5s in NYC

But Adam’s insistence on maintaining a mask mandate for under-5’s proved the straw that broke the camel’s back for Jampel, particularly as the mayor’s whirlwind social life has seen him regularly attend showbiz events unmasked in recent weeks.

It had been due to expire on April 4, but was extended indefinitely on April 1 in response to an uptick of COVID cases in NYC, with under-5s currently ineligible to receive a COVID vaccine.

Jampel has repeatedly taken aim at Adams in recent months, with her former bosses claiming her prior decision had informed the decision to terminate her.

During Monday’s press conference about LGBT rights, she said to Adams: ‘Three weeks ago, you told parents to trust you that you would unmask our toddlers,’ she said.

‘You stood right here, and you said that the masks would come off April 4. That has not happened.

‘Not only did you renege on your promise, you had your lawyers race to court on Friday night arguing that there would be irreparable harm if children under 5 are allowed to take off their masks today along with their older siblings in school. 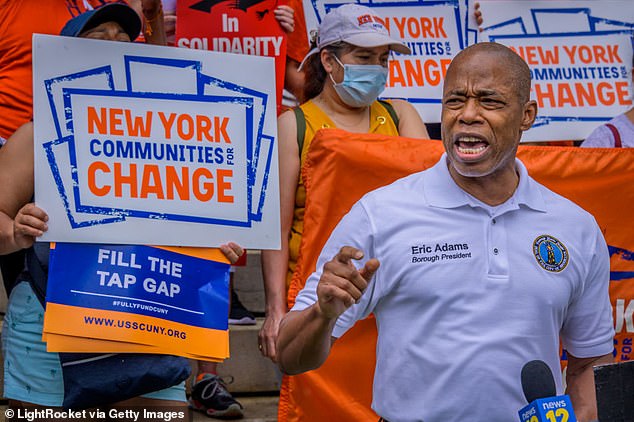 Adams positioned himself as a pro-police centrist during his successful run for mayor, leading to claims of opportunis

Adams answered by saying that the mask mandate had been maintained over an uptick in cases, because under 5’s aren’t eligible to receive the shot. Just hours later, it was revealed Jampel had been fired from her role as an attorney, with a city official condemning her behavior at the press conference.

After her firing Jampel tweeted unrepentantly, saying: ‘Je ne regrette rien’ (I regret nothing), before adding: ‘The fight continues.’

Jampel in December wrote an op ed for DailyMail.com, asking: ‘Where is the outrage on behalf of our children, who have been forced to endure these restrictions going on 2 years?

‘Why don’t we insist on the same quality of life — that we demand for ourselves — for our own kids?’

Jampel issued a statement on Twitter in the wake of her dismissal suggesting that she wouldn’t comment further on her firing.

She wrote: ‘My statement is that I am retaining counsel and will not litigate in the press.’

Contacted by DailyMail.com on Monday night, she said she would not be commenting further until she had retained a lawyer.

A Law Department spokesman told DailyMail.com in a statement: ‘We hold all of our employees to the highest professional standards. In public statements, Ms. Jampel has made troubling claims about her work for the city Law Department.’

‘Based on those statements, the decision had been made to terminate her prior to [Monday],’ the spokesman added.

The statement added that Jampel’s ‘decision to lie to City Hall staff and state she was a journalist at a press conference, demonstrate a disturbing lack of judgment and integrity.’