The Northern District of Georgia sentenced him to four years and nine months in prison, followed by three years of supervised release, for hatching a scheme to steal nearly $925,000 of the $6.2million his city was tasked with handing out.

He syphoned off funds intended to help struggling small businesses in the city, prosecutors said, and has been ordered to repay $120,000 stolen by Lary and an associate.

Stonecrest, located 20 miles east of Atlanta, and is home to only about 53,000 residents.

In March 2020, then-President Donald Trump signed the CARES Act into law, which included a financial package of $125million for DeKalb County, intended to go to small businesses struggling to stay open during the global pandemic.

DeKalb County authorized a grant of $6.2million to Stonecrest. 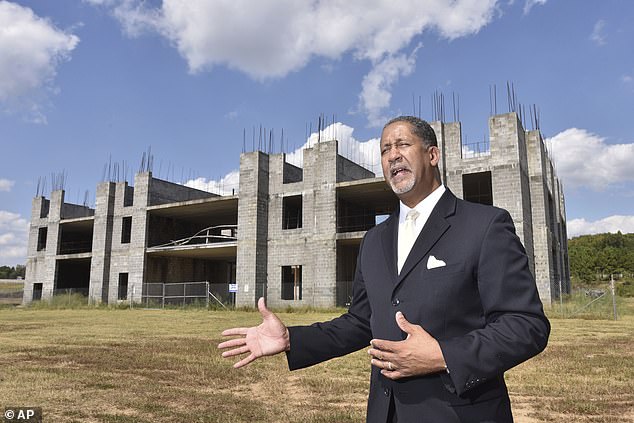 Jason Lary,ex-mayor for Stonecrest, was sentenced to nearly five years in prison on Wednesday, July 13, 2022 for masterminding a scheme to steal Covid funds

The businesses there had been forced to close during Covid, and desperately needed the funds.

Instead, a chunk of that money went into a private company, Municipal Resource Partners Corporation.

A far cry from a struggling small business, it was in fact owned by Lary himself, the city’s mayor.

Working behind the scenes, he pulled strings to hire his co-conspirator, Lania Boone, to be its bookkeeper.

He then forced the city to enter a contract with his own company, hidden from the public, diverting the funding there instead of sending it to small business owners.

Lary, who had been mayor since 2016, used the money to pay off the mortgage on his lakeside home and his outstanding taxes.

Boone used her access to the company’s bank accounts to wire transfer approximately $108,000 of relief funds to a mortgage servicing company — which was in fact a ploy, allowing Lary to pay off his mortgage.

He also used some of the money to pay for an associate’s political advertising, according to the ruling.

Paying off his accomplice, Lary sent approximately $7,600 in stolen relief funds to Boone, which she used to pay for her son’s college tuition and rent.

In or about November 2020, the city published an application on its website for businesses to apply for relief funds under the Small Business Program.

Hundreds of small businesses applied, but most were rejected.

‘Lary betrayed the trust placed in him by the citizens of Stonecrest by stealing the very funds meant to help his constituents weather the Covid-19 pandemic,’ said US Attorney Ryan K. Buchanan.

‘The people of Stonecrest deserved better, and corrupt officials can expect severe consequences for using their offices to commit crimes.’

In October 2021, the United States seized approximately $480,000 of fraud proceeds held in the bank accounts of companies ultimately owned by Lary.

Soon after, authorities caught up with the Mayor, who resigned on January 4. They put him on trial in Georgia, where he pled guilty on July 13.

‘Mr. Lary has accepted full responsibility for his conduct and looks forward to putting this chapter of his life behind in order to redeem himself to those he has disappointed,’ his Dwight Thomas wrote in an email seen by the New York Times.

Criminals have stolen close to $100billion in pandemic relief funds, the US Secret Service has said.

The government spent approximately $3.5trillion on Covid relief funding, with more fraud expected to be uncovered.

Some fraud cases border on the ridiculous, with cases piling on high as further investigations get under way.

In Florida, the authorities said, a woman paid a hitman using part of a $15,000 loan intended to aid struggling small businesses.

Another man in Georgia spent $57,000 in coronavirus relief money to buy a rare Pokémon trading card

Others have fraudulently spent the money on Lamborghinis, Ferraris, jewelry and other luxury goods.