If, like me, your exam success peaked at the Cycling Proficiency Test, don’t despair. You can immerse yourself in the atmosphere of the University of Cambridge’s hallowed halls by checking in to the University Arms hotel on Regent Street.

Once inside, designer Martin Brudnizki (of Annabel’s nightclub fame) has fun, channelling university character throughout, from the Cambridge blue of the 189 guest rooms to the university tie striped carpets. Even the concierges’ smart uniforms are a homage to Cambridge alumnus Winston Churchill’s siren suits. 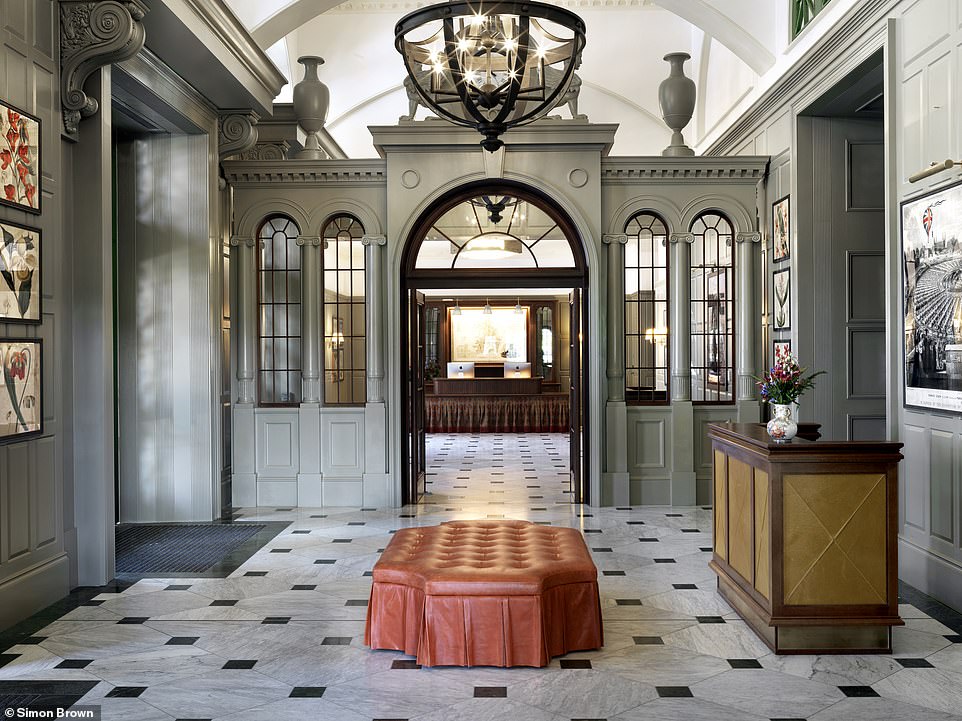 Hallowed hallway: Jennifer Cox checked into University Arms Hotel, the oldest hotel in Cambridge. Pictured is the impressive grand lobby, which her husband likened to Hogwarts 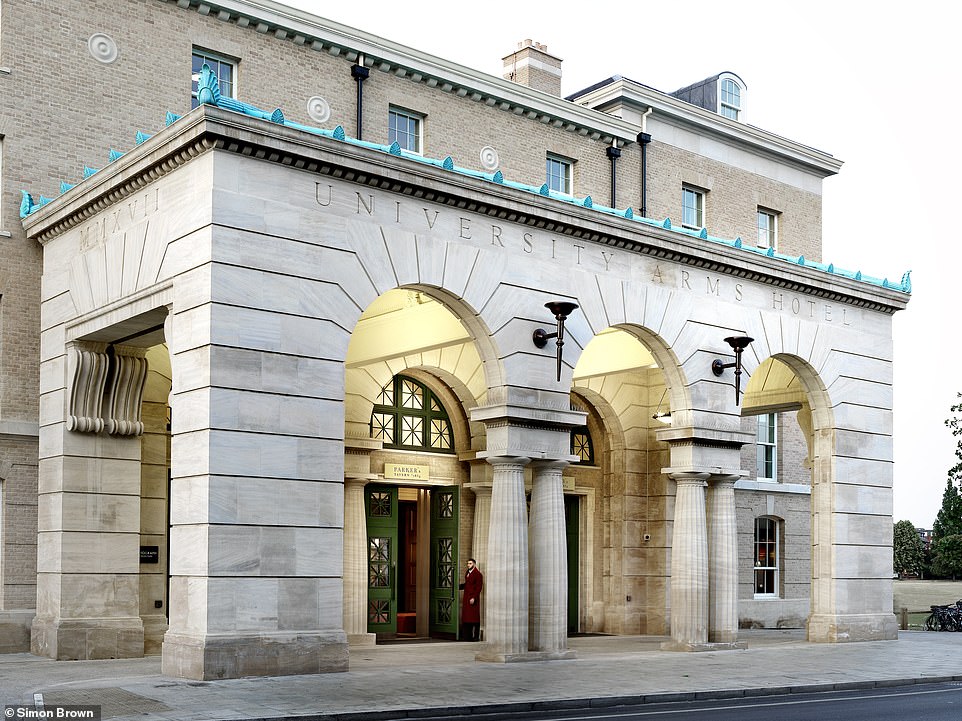 The hotel, now part of Marriott’s Autograph Collection, dates from 1834. It recently underwent an £80 million makeover

And it works. For all its quirkiness (Alan Bennett, an Oxford man, reads Wind In The Willows in the chic loos), the University Arms is a smart, seriously stylish hotel. We marvelled at the grand lobby, which my husband likened to Hogwarts.

It’s certainly magical: to the right, arched glass doors lead to a cosy wood-panelled library with fireplace and velvet sofas (where we would later enjoy the most decadent afternoon tea). 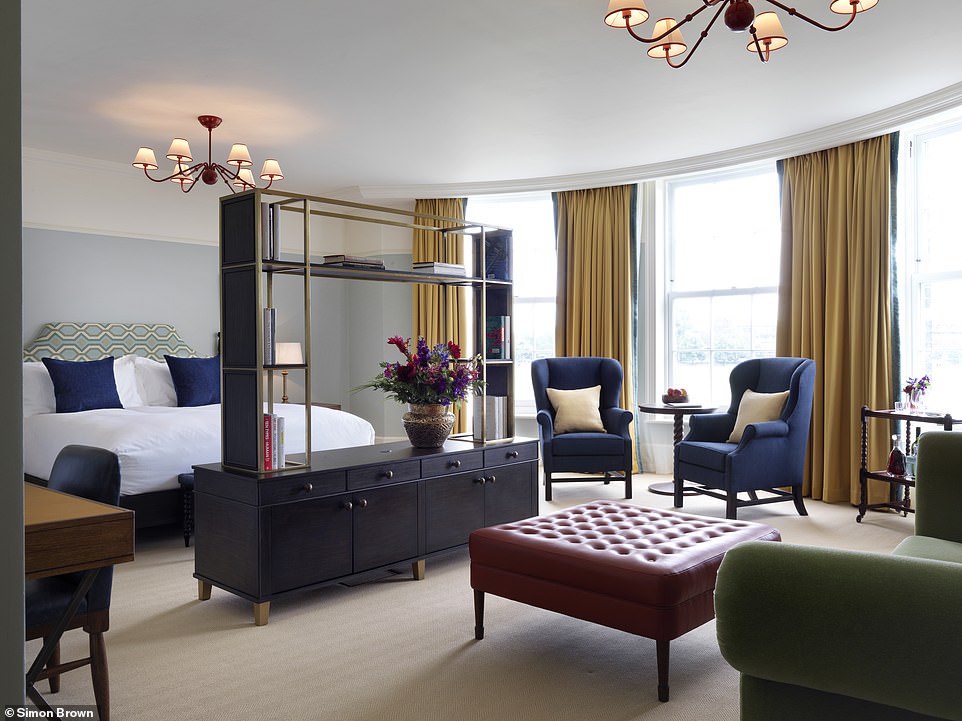 The hotel’s 10 suites are all named after illustrious Cambridge University alumni. Above is the Stephen Hawking suite, in which Jennifer stayed 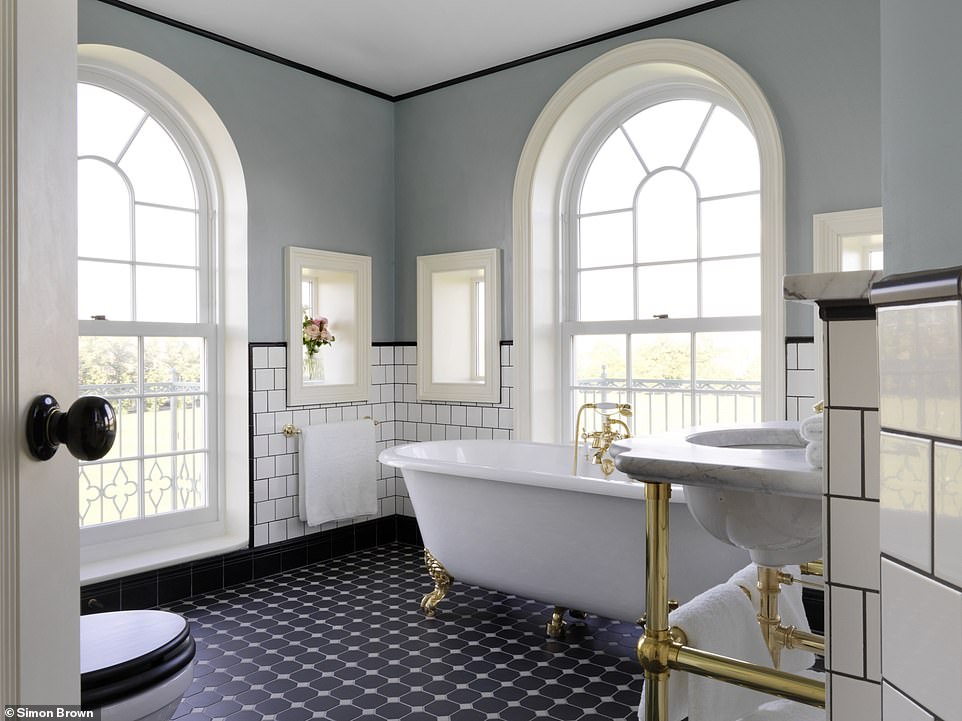 Pictured is the bathroom in the Marlowe suite, named after the Elizabethan playwright and poet Christopher Marlowe 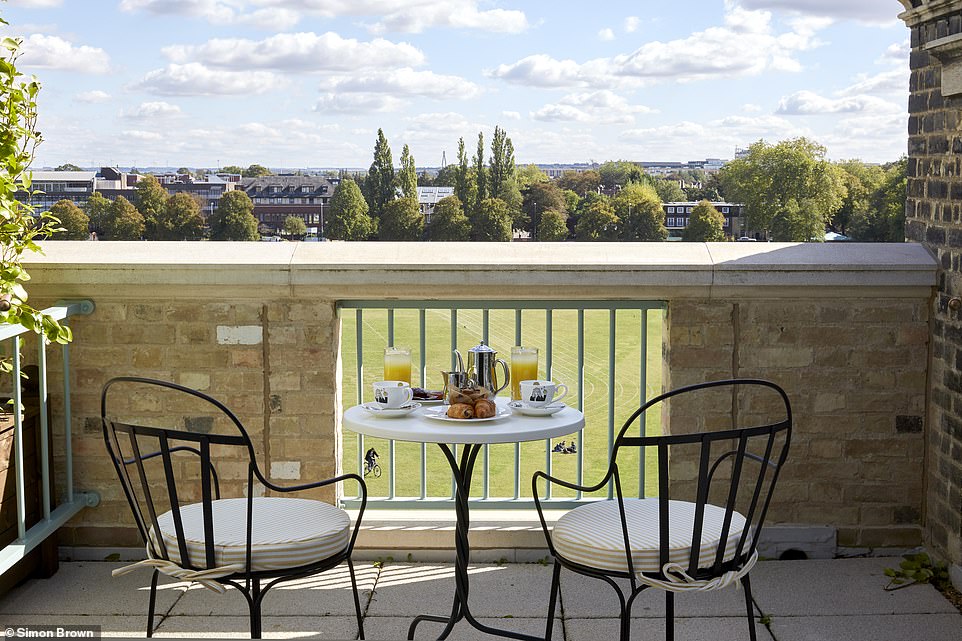 ‘For all its quirkiness, the University Arms is a smart, seriously stylish hotel,’ says Jennifer

Navigating a warren of corridors, we check in to the spacious Stephen Hawking suite on the first floor: one of 10 suites named after illustrious alumni.

Later we take a stroll across the common, circling back via Cambridge’s beautiful, ancient colleges, and that night we sample chef Tristan Welch’s dishes in Parker’s Tavern. 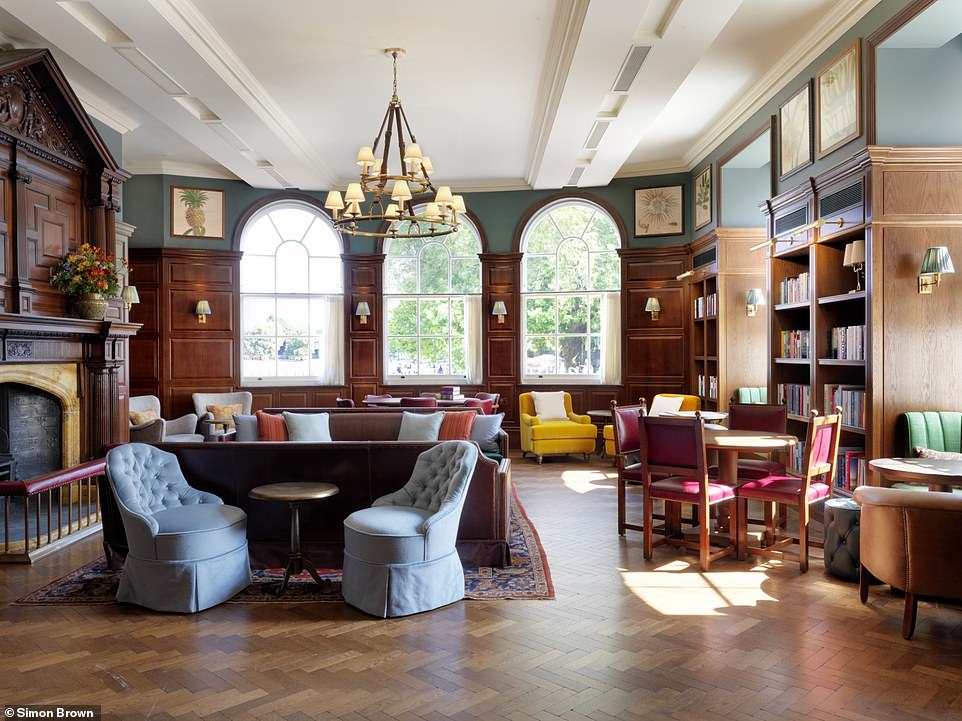 From the lobby, guests can enter the cosy wood-panelled library with fireplace and velvet sofas (above) 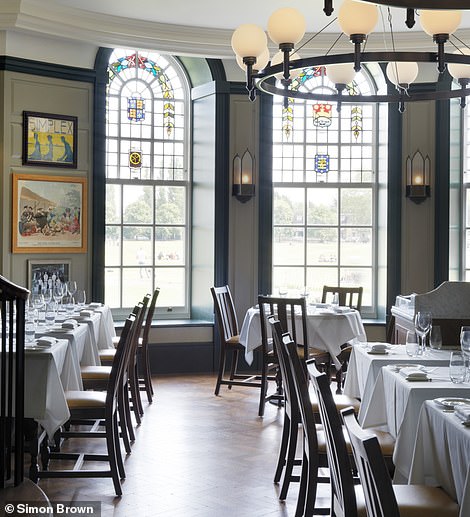 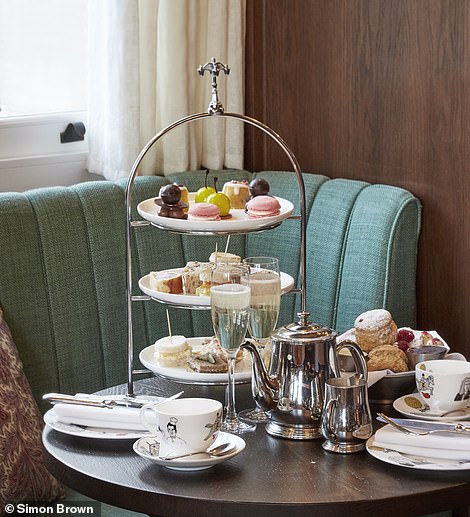 Parker’s Tavern bistro (left) resembles a college refectory, with huge original stained-glass windows overlooking the sprawling Parker’s Piece common outside. Pictured on the right is the hotel’s ‘decadent’ afternoon tea, which can be enjoyed in the library

He specialises in British classics using local produce, and our dinner of pan-fried hake with asparagus and tomato, and sirloin steak with Cambridge sauce and watercress salad, is simple and delicious.

After an extremely comfortable sleep (possibly aided by the Bloomsbury Boozer cocktails), I eschew the full English breakfast to graze granolas, yogurts, fruit and sourdough toast.

Perfectly fuelled, we grabbed a couple of hotel guest bikes and cycle over Mathematical Bridge to the glorious Cambridge University Botanic Gardens. A weekend break that passed with flying colours. 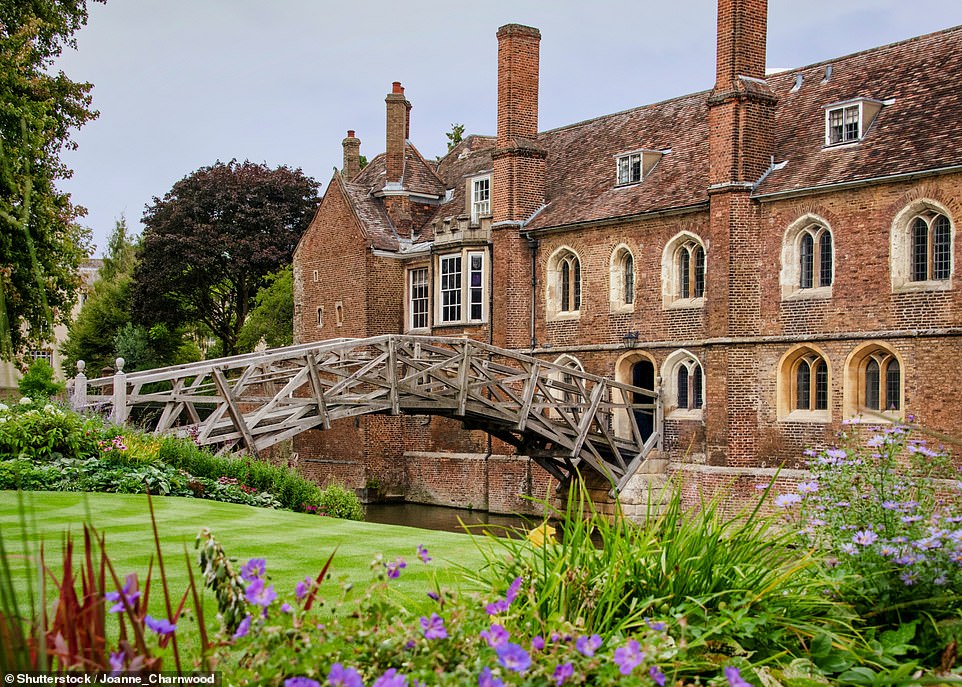 During her stay, Jennifer borrowed a hotel guest bike and cycled over Mathematical Bridge (above) 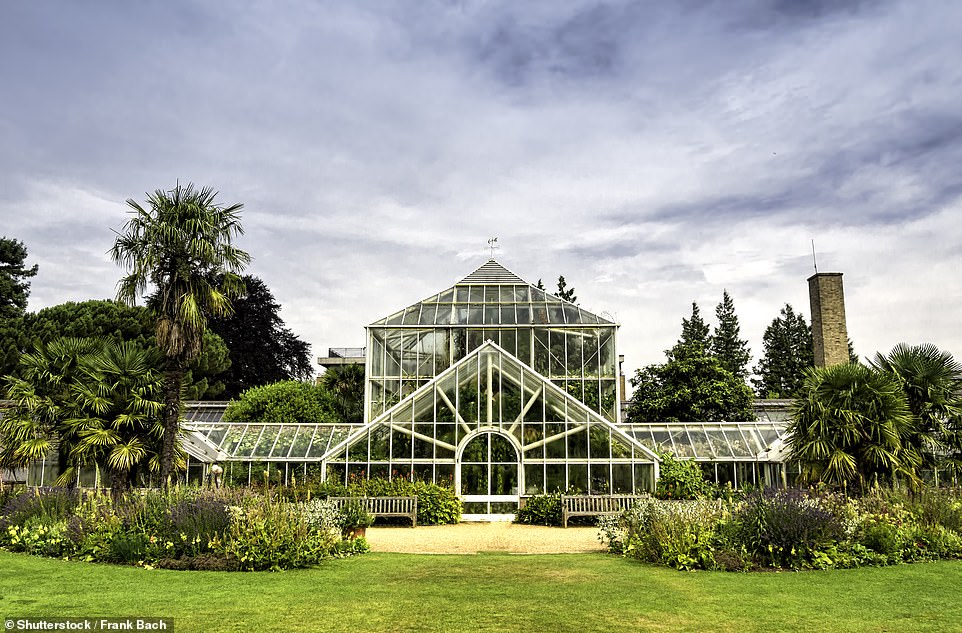 Jennifer spent the day at the ‘glorious’ Cambridge University Botanic Gardens, pictured above