The father of a four-year-old Afghani girl who vanished without a trace in Texas nearly six months ago has been terrorized online by conspiracy theorists who claim he sold her as a child bride.

Lina Sarder Khil disappeared from an apartment complex playground in San Antonion in December. Her disappearance is being treated as a missing person case, and there are no suspects. The search for her has been suspended indefinitely, although the San Antonio Police Department said it was still following up tips and the case remains open.

At the time of her disappearance, her father Riaz Sardar Khil, 27, said that his pregnant wife was watching Lina when she walked over to a nearby path and vanished. Her mother initially thought she may have returned to the family’s Villa Del Cabo apartment.

On Tuesday, Khil told DailyMail.com through a translator that he and his wife Varmina have been devastated by both their daughter’s disapperance and the vile online comments directed toward them.

‘Whenever I open Facebook or other social media I see hateful messages and accusations saying that, ‘I sold my daughter to be a child bride; ‘I sent her back to Afghanistan; ‘I abducted her,’ or ‘my wife did something to our daughter and I am covering up for her,’ he said in Pashto through translator Lawang Mangal.

He added: ‘These are all wrong and they are wrong about me. All of these false allegations make me very sad and I am afraid that someone will harm me and my family.’

Lina and her family moved to the US in 2019 from Afghanistan after fleeing the country. Her father assisted American troops in the country, and the family was brought to the US as refugees when the Taliban retook control of the country. 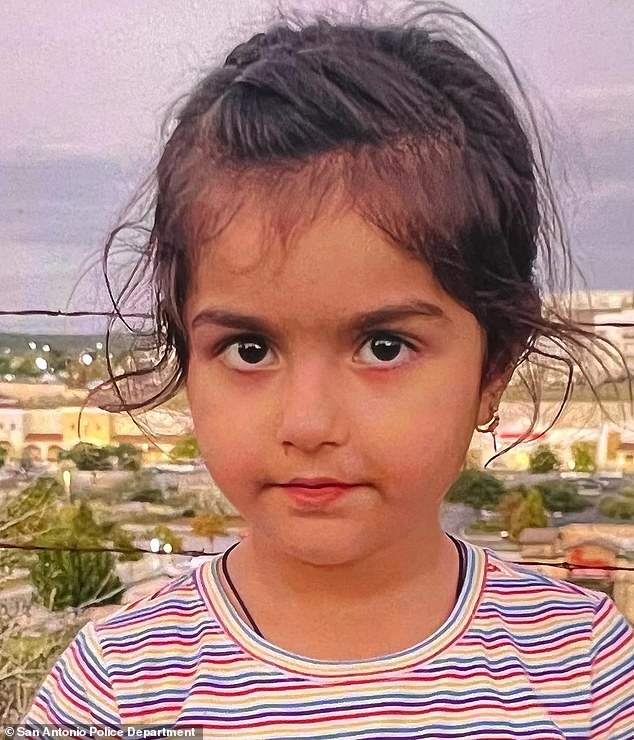 Lina Sardar Khil was three years old when she vanished on December 20, 2021 while out in the playground at her family’s apartment buliding in San Antonio, Texas 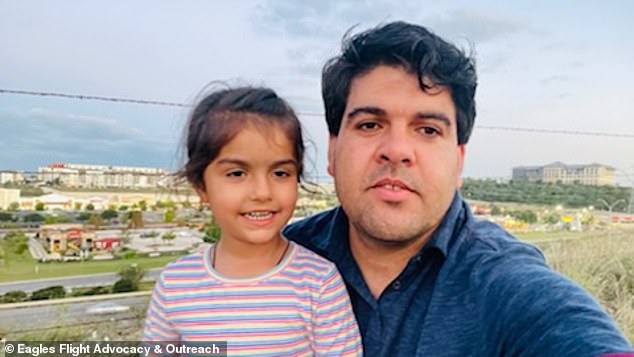 Lina with her father Razi Sardar Khil who has been desperately searching for his little gir.l The photo was taken in October 2021, weeks before the child vanished with out a trace 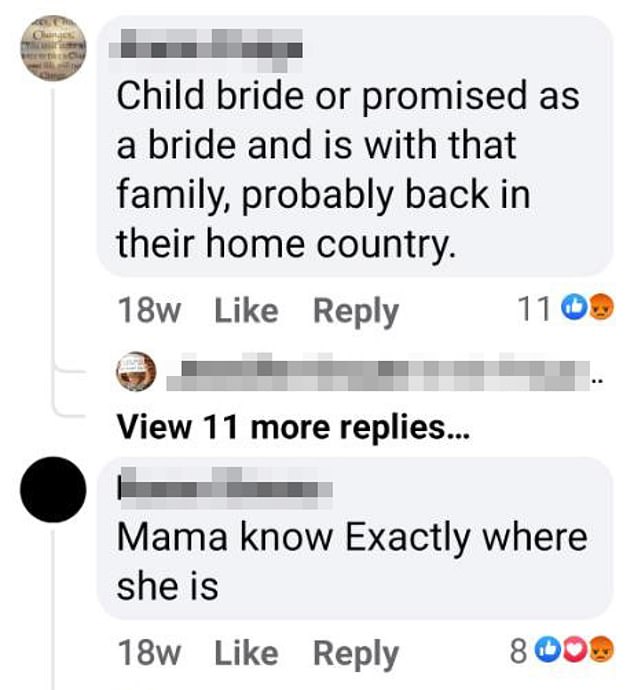 Khil told DailyMail.com that since his daughter’s disappearance, he has been stalked and the negativity faced online has taken a toll on him and his wife, who do not feel safe in San Antonio.

He said that when he returned home from work recently, he was nearly attacked by in the parking lot by a hostile stranger. He said that neighbors came to his defense, and the man who tried to attack him was an outsider and not part of their Afghan community.

Khil also said that conspiracy theorists have claimed that his daughter was taken from him in retaliation for him working for US troops in Afghanistan.

‘I came to the United States with great hope and that I will have a bright future but all my hopes are dead now. The US was different than I thought it was,’ he said.

‘There is pre-planned propaganda going on. There is no such type of propaganda or conspiracy theories in Afghanistan.’ 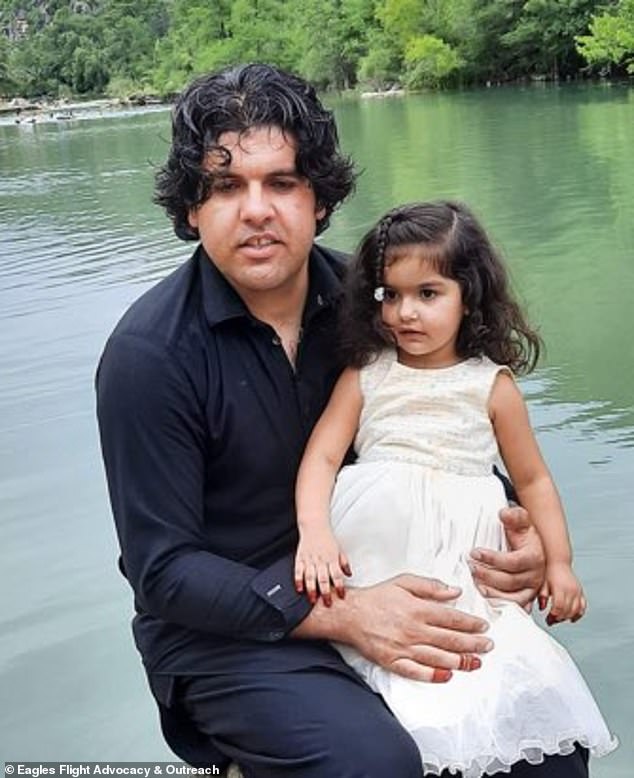 Lina was only 3 years-old when she mysteriously disappeared. In the photo, she is seated sweetly sitting on her father’s lap with the lake as the backrdrop 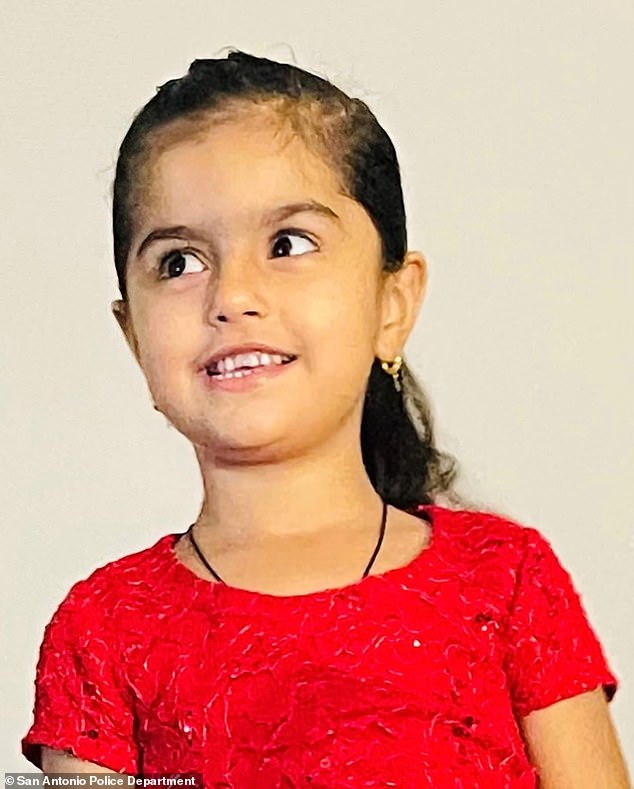 Lina is 4 feet tall and weighs 55 pounds. She has brown eyes and shoulder-length brown hair that was in a ponytail when she vanished, according to a handout. She was last seen wearing a black jacket, a red dress and black shoes

He claimed that child abductions were not common in Afghanistan, and that typically, if a child goes missing, it is usually for ransom. There are other times when a child runs away they are usually found safe. And, in the most extreme cases a child is sold because families are so poor.

Khil, also has a two-and-a-half-year-old son, Rayhan, and became a father for the third time after his wife gave birth to a baby boy named Saud on Saturday.

The joys of having a new son has been overshadowed by the disappearance of his eldest child and only daughter.

‘We are very happy to have a new baby at home but we are very afraid for our children’s future because we lost Lina,’ Khil said.

When he isn’t searching for his little girl he is working as driver for Amazon and Uber to be able to feed his family.  He said he has also been extremely discouraged by the police response.

‘We are not being informed of what is happening. Whenever I call they same the same thing. I don’t believe they are working on the case,’ he said. ‘We have no leads. Nothing.’

Pam Allen, CEO of Eagles Flight Advocacy and Outreach, who has been working with the Khil family, has been involved in helping the Afghan refugee community since 2009.

She told DailyMail.com that she believes the family is being treated differently because they are refugees.

‘If this was an American family it would be totally different,’ she said. ‘The police and FBI don’t communicate with the family. The week Lina went missing and divers were searching a creek the parents weren’t informed. They found out by social media.’ 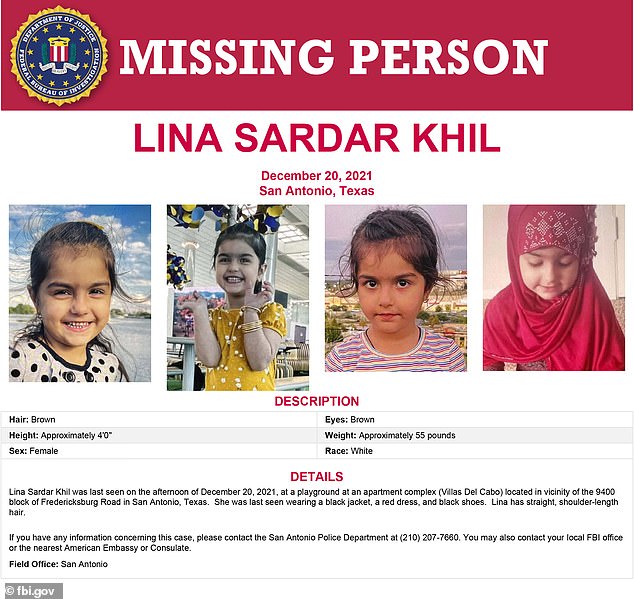 One of the numerous missing person’s flyers that were distributed. This one was from the FBI 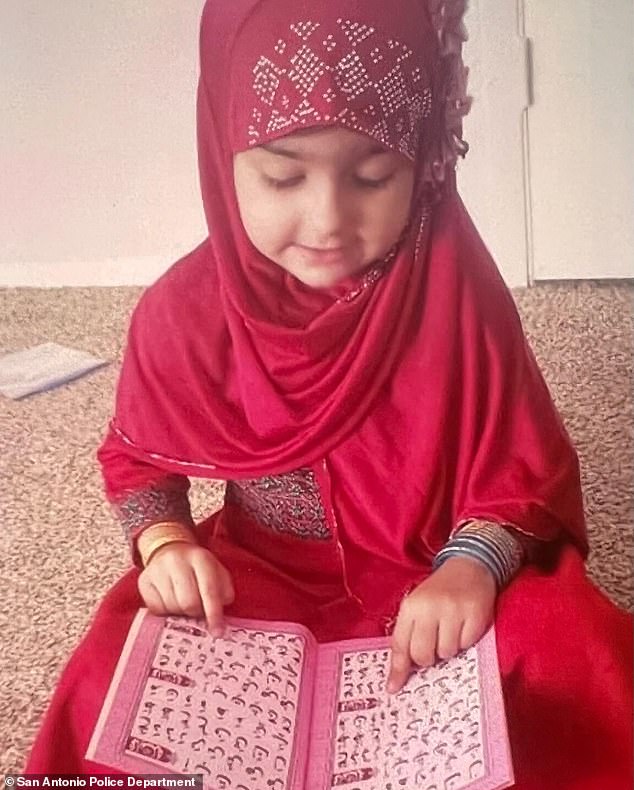 On January 29, a prayer vigil was held at the Mosque, Allen said.

‘The Mayor of San Antonio was present and told the community to be vigilant. He said that Lina was ‘San Antonio’s child, but on the other side of that sentiment are some truly awful responses to this family’s tragedy,’ she said.

‘This is not a shared trauma. This child’s family goes to sleep and wakes up with this trauma everyday. No law enforcement initiated communication for the family,’ Allen said.

She added:  ‘San Antonio’s child seems to have been forgotten.’

Allen said she had to call off the last two searches for Lina because the harassment had gotten so bad.

She said the last time they searched, her husband hired a bodyguard because he  was concerned for Allen’s well-being.

‘There are people who go on these searches with us who film us and take pictures of us and come up with different stories,’ she said. ‘It’s outrageous and it is unconscionable and people listen to that.’

She also said the family have had random strangers calling themselves psychics knocking on the door of their home. 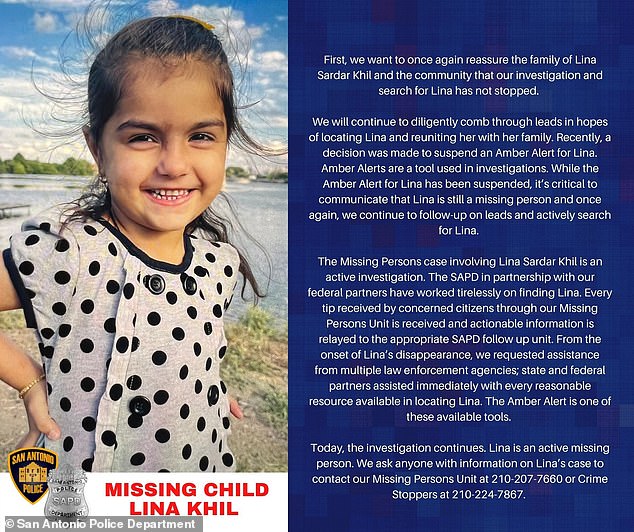 Another missing flyer handout that was distributed by San Antonio Police 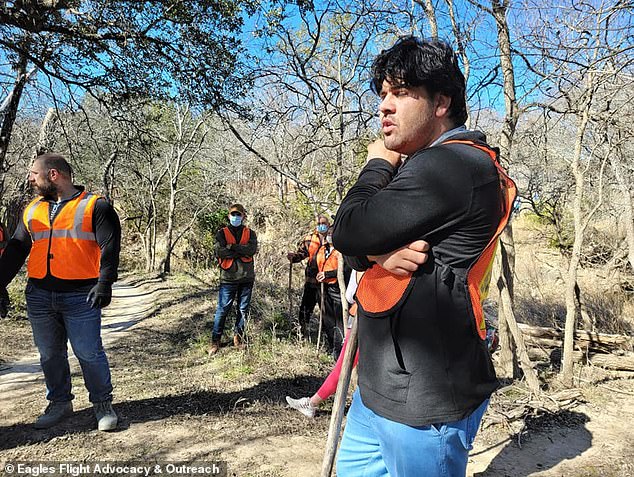 Khil looking exhausted from the endless days of working with crews searching for his daughter who vanished on December 20, 2021 from the playground of the San Antonio apartment 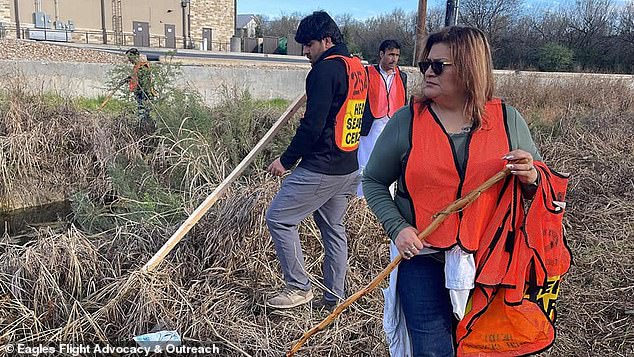 Pam Allen, CEO of Eagles Flight Advocacy and Outreach, has been working with the Khil family organizing searches and has been working with the Afghan refugee community since 2009. On June 20 Allen has arranged their monthly vigil for Lina that will take place at the family’s home. This month has a special significance since it will be the six-month mark of Lina’s disappearance 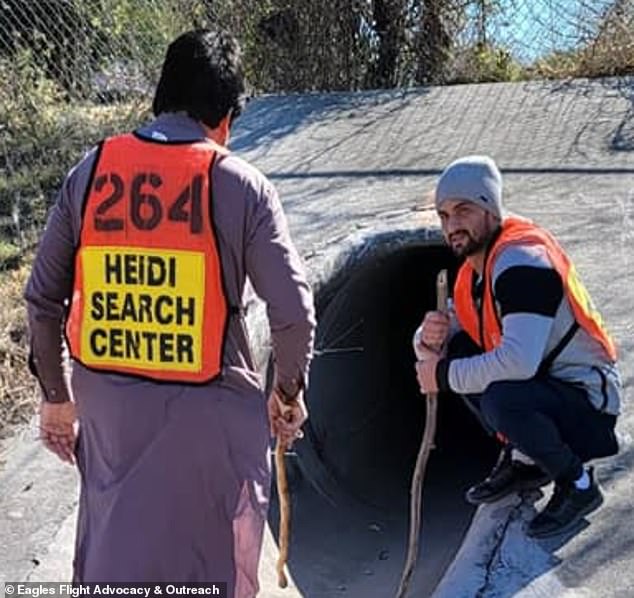 One psychic told him that his daughter was at the coast. Others sent photos of  storage unit, an RV parking lot, claiming Lina was being held in those areas.

A man from Jordan, Allen said, claimed that Lina was in California.

‘It was heartbreaking to listen to but then to realize it wasn’t true,’ Allen said.

‘The psychic activity got real aggressive,’ Allen said. ‘My Facebook got hacked my son’s family was harassed and trespassers came. My mother’s home was being staked out. Lawang [the translator] could not let his family out of their home. One man had to even be arrested for going to Riaz’s home.’

She added: ‘These stalkers and haters have actually produced a lot of distraction for us and law enforcement. I had to hire a lawyer and private investigator. We have have had to do things discreetly when there are so many that really want to help.’

‘Lina remains as a missing person as a crime was never established. On the night of her disappearance, a preliminary search did not result in finding her in the areas she is known to go or within her safety zone,’ she said.

‘The initial fear was the possibility of a stranger abduction which is why the search was expanded to the scope it became. The expanded scope resulted in a large amount of data being collected through interviews, CCTV coverage in the area, etc.

She said SVU and FBI will not suspend our investigations until all leads are exhausted. 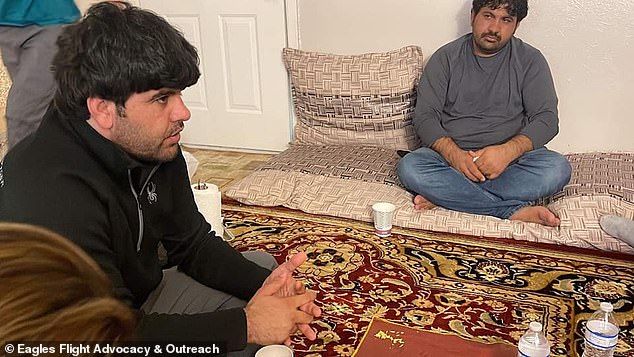 Khil speaking with members of the community praying for his daughter’s safe return. He said he came to America with great hope but all of his hopes are ‘dead now. ‘I came to the United States thinking I will have bright future. I didn’t see the U.S. the way I was thinking,’ Khil said 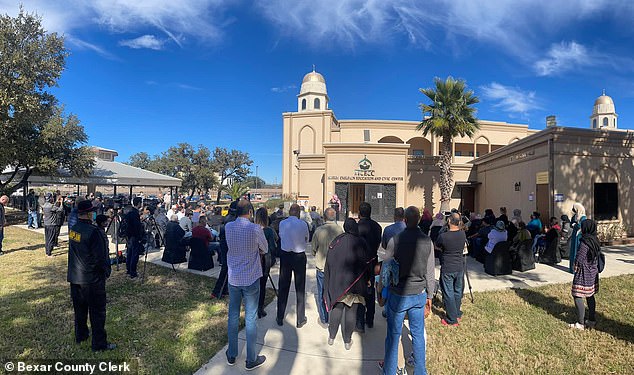 Members of the community show their support for Khil and his family as they hold a vigil for Lina sending prayers for her safe return.  The community has been trying to be supportive since the horrifying ordeal praying for little Lina’s safe return. In February, The Islamic Center of San Antonio increased their initial reward of $10,000 to $250,000 for her safe return, but sadly no one has come forward

On the day of her disappearance, Lina had been playing with other children at the playground of the family’s apartment complex in San Antonio. At the time, Lina’s mother stepped away for a few minutes, and she vanished.

She was reported missing an hour later, and police officers went door-to-door in the community of more than 300 refugees to search for her.

The search continued on foot, and uniformed officers with K9 units combed through remote wooded areas and the rugged terrain, while scuba divers searched nearby lakes. 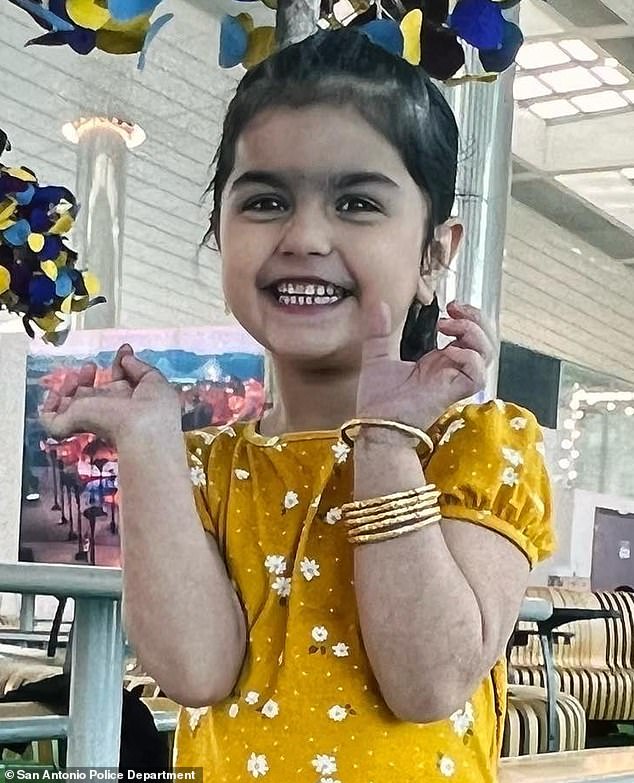 Khil pictured as his daughter gives her daddy a kiss on the cheek as the busy father holds her younger brother, Rayhan, who was a baby and is now 2-1/2 years old. The heartbroken father said that he will not leave San Antonio, Texas until his daughter is found. ‘I love my child. She is my first child and a part of my heart. I will not stop looking for her until I find her’

On February 20 Lina turned four years old. The family had a birthday celebration in their apartment hoping and praying that they would seen see their little girl again.

Khil told DailyMail.com that he thinks his daughter has been abducted and that she is no longer in the United States. He denies any of the rumors that have circulated that a family member may have taken Lina. He said ‘that is not possible.’

He continues to hold out hope that she will be found. Three months ago, the family started working with Abel Pena, a private investigator who runs a nonprofit.

Allen said every month on the 20th they hold a vigil for Lina at various different locations: the church, the local mosque or their home.

The upcoming vigil that is slated for Monday, June 20, will be held at the family’s apartment due in part, to Lina’s new baby brother that they family hopes she will one day get to meet.

The community has been trying to be supportive since the horrifying ordeal praying for little Lina’s safe return.

In February, The Islamic Center of San Antonio increased their initial reward of $10,000 to $250,000 for her safe return, but sadly no one has come forward.

The heartbroken father said that he will not leave San Antonio until his daughter is found.

‘I love my child. She is my first child and a part of my heart. I will not stop looking for her until I find her.’