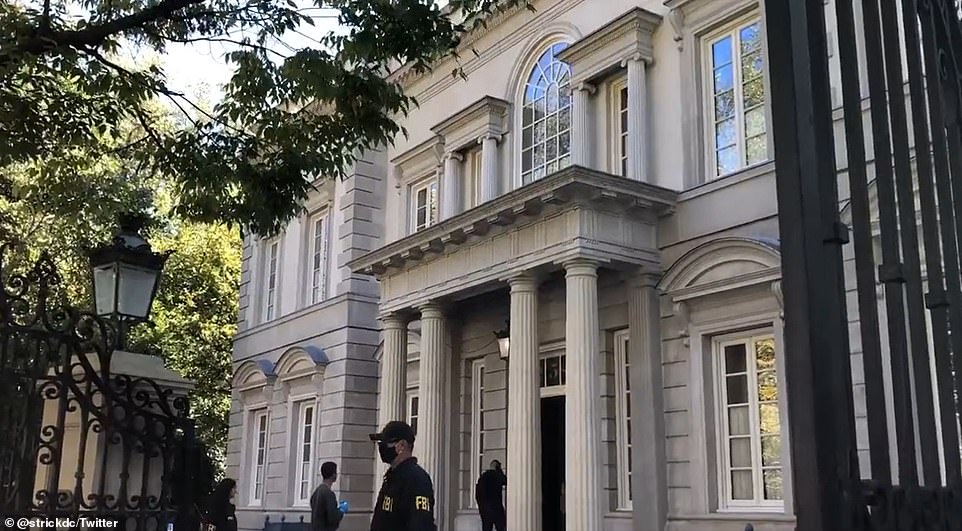 The FBI have raided a $15million mansion in Washington DC and homes in New York City linked to Oleg Deripaska, a controversial Russian oligarch and President Putin ally who once hosted former UK Chancellor George Osborne and Peter Mandelson on his yacht.

FBI agents were seen surrounding the Washington DC residence connected to Deripaska, who has been linked to ex-MI6 spy Christopher Steele, with the raid stemming from sanctions imposed on him in 2018.

The agents carried boxes out of a mansion in one of Washington’s wealthiest neighborhoods, with yellow ‘CRIME SCENE DO NOT ENTER’ tape across the front lawn and towed away a vehicle on Monday.

A spokesperson for the U.S. Federal Bureau of Investigation confirmed the agency was conducting a court-authorized law enforcement activity at the home, but did not provide a specific reason for sealing off and searching the Washington mansion.

Deripaska’s spokesman told Russian outlet Kommersant that searches were underway at his relatives’ homes in New York and Washington. They said Deripaska doesn’t own the homes but the searches are tied to US sanctions against him.

A source told DailyMail.com that Deripaska hasn’t been back to the US since at least 2017 and had no intention of returning after the Treasury Department hit him with sanctions, but those claims have not been verified.

Deripaska, 53, along with other influential Russians, has been under U.S. sanctions since 2018 because of their ties to Russian President Vladimir Putin after alleged interference in the 2016 election.

Deripaska once hosted Lord Mandelson on his super-yacht, where the pair holidayed alongside Nat Rothschild, then shadow chancellor George Osborne and Tory fund-raiser Andrew Feldman in Corfu in 2008.

FBI agents outside of Deripaska’s Washington, DC home on Monday morning. His spokesman said it was not his but a relative’s home 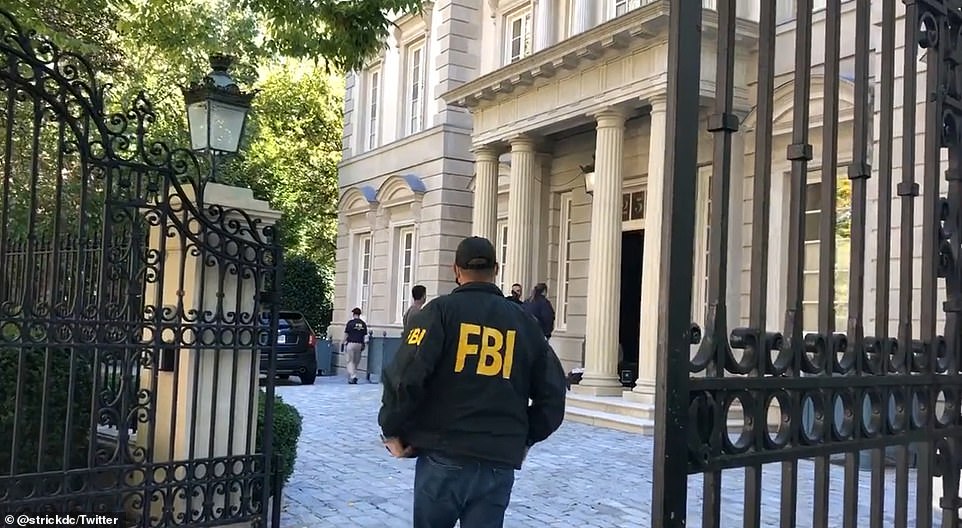 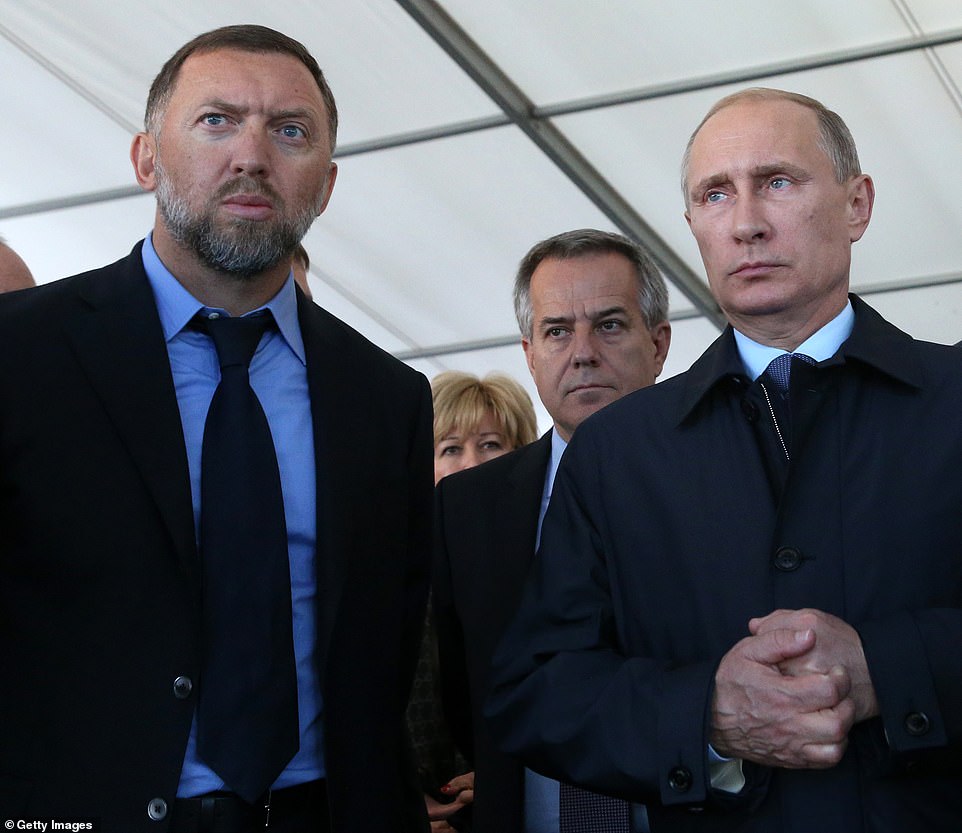 Oleg Deripaska, who is said to be a close ally of Russian President Vladimir Putin, is considered one of Russia ‘s wealthiest men.

Born in 1968 in the city of Dzerzhinsk, some 250 miles east of Moscow, Deripaska attended the School of Physics at Moscow State University before graduating from Moscow’s School of Economics at Plekhanov Academy of Economics.

He went on to establish himself in the domestic metals industry and in 2008, Forbes magazine listed Deripaska as the ninth-richest man in the world, worth about $28 billion.

But when the financial crisis hit he almost went bankrupt before bouncing back – with the help of the Kremlin, according to some reports.

He hit the headlines in 2017 when he was found to have ties with Paul Manfort, President Donald Trump’s former campaign chairman.

A report claimed $26million was transferred from Oguster Management Ltd – a company owned by Deripaska – to Yiakora Ventures Ltd – entities linked to Manafort.

Manafort denied that any business he did with Deripaska a decade ago was related to helping the Russian government.

British peer Lord Mandelson is also an intimate friend of Deripaska, having in 2005 famously joined him in a ‘Banya’ — a traditional sauna in which they were thrashed with bunches of birch twigs by a 25-year-old man, before jumping into freezing water.

Deripaska also hosted Lord Mandelson on his super-yacht, where the pair holidayed alongside Nat Rothschild, then shadow chancellor George Osborne and Tory fund-raiser Andrew Feldman in Corfu in 2008.

Deripaska filed a lawsuit in March 2019 against the Treasury Department, accusing it of illegally targeting him for sanctions, but the suit was tossed out this year by a federal judge.

The activity at the homes linked to Deripaska is connected to a federal investigation based in New York, a spokesperson told CNN.

It’s not clear whether that would be the Southern District of New York, known for prosecuting some of the most high-profile cases in the country including an ongoing federal probe into Rudy Giuliani’s ties to Ukraine and an investigation into Donald Trump’s business affairs.

A spokesman for the Southern District of New York declined to comment.

Properties linked to Deripaska in New York include a sprawling $42.5 million mansion in Manhattan’s Upper East Side neighborhood. That home was among a number of assets that were frozen by the sanctions.

He was able to allow the children and ex-wife of his former business partner, the oligarch Roman Abramovich, to live there, the New York Post reported in 2018.

The New York property being raided on Monday is reportedly in Manhattan’s West Village.

Deripaska also has ties to the UK’s former chancellor George Osborne, having hosted him on his yacht off Corfu in 2008 for drinks when he was shadow chancellor.

It sparked accusations the ex-chancellor was canvassing him for donations to the Conservative Party coffers. Osborne denies these accusations.

Last month, Osborne won his first bit of business as an investment banker with the firm set up by Deripaska.

Osborne joined boutique advisory firm Robey Warshaw in April and thanks to his contacts the firm is now advising Russian aluminium giant Rusal.

Rusal is a subsidiary of London listed EN+, a metals company founded by oligarch Oleg Deripaska in 2002.

British peer Lord Mandelson is also an intimate friend of Deripaska, having in 2005 famously joined him in a ‘Banya’ — a traditional sauna in which they were thrashed with bunches of birch twigs by a 25-year-old man, before jumping into freezing water.

Deripaska also hosted Lord Mandelson on his super-yacht, where the pair holidayed alongside Nat Rothschild, then shadow chancellor George Osborne and Tory fund-raiser Andrew Feldman in Corfu in 2008.

But critics said the move was further worrying evidence of the ‘revolving door’ between Whitehall and the City.

Deripaska has been linked to Paul Manafort, the onetime chairman of Donald Trump’s 2016 U.S. presidential campaign.

Deripaska once employed Manafort, who was convicted in 2018 on tax evasion and bank fraud charges and was among the central figures scrutinized under investigations of alleged Russian meddling in the 2016 election, which Moscow denies.

The next year however, Donald Trump lifted sanctions on three companies connected to him despite objections from Congressional Democrats.

At the time Trump’s Treasury Department claimed those companies ‘have reduced Oleg Deripaska’s direct and indirect shareholding stake in those companies and severed his control.’ 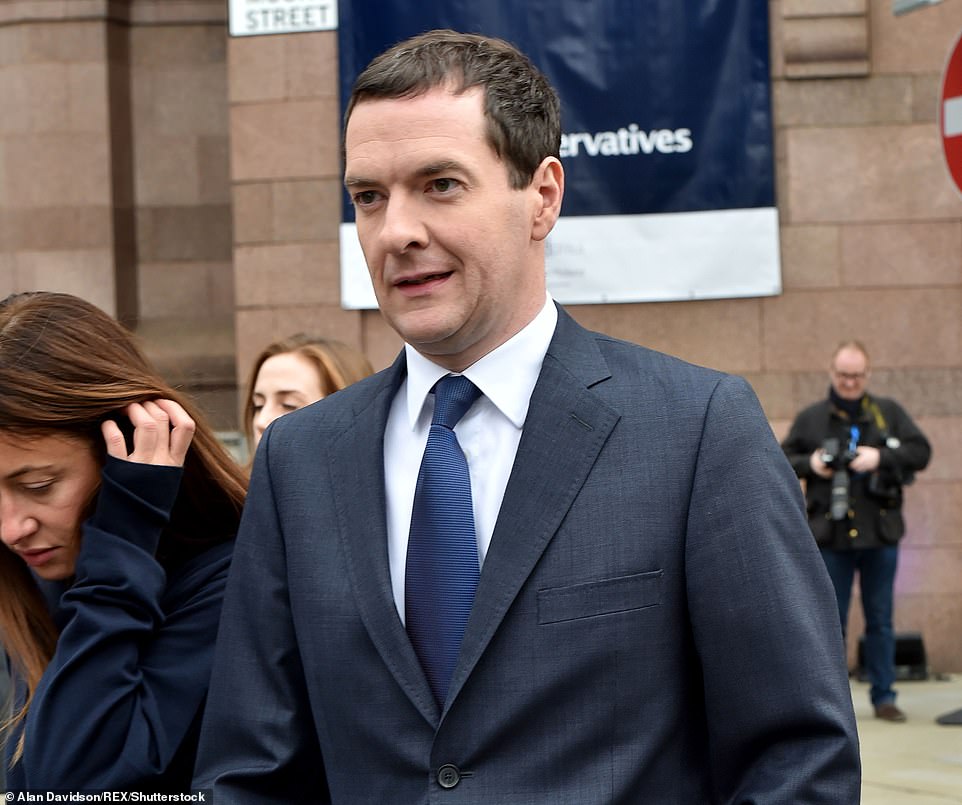 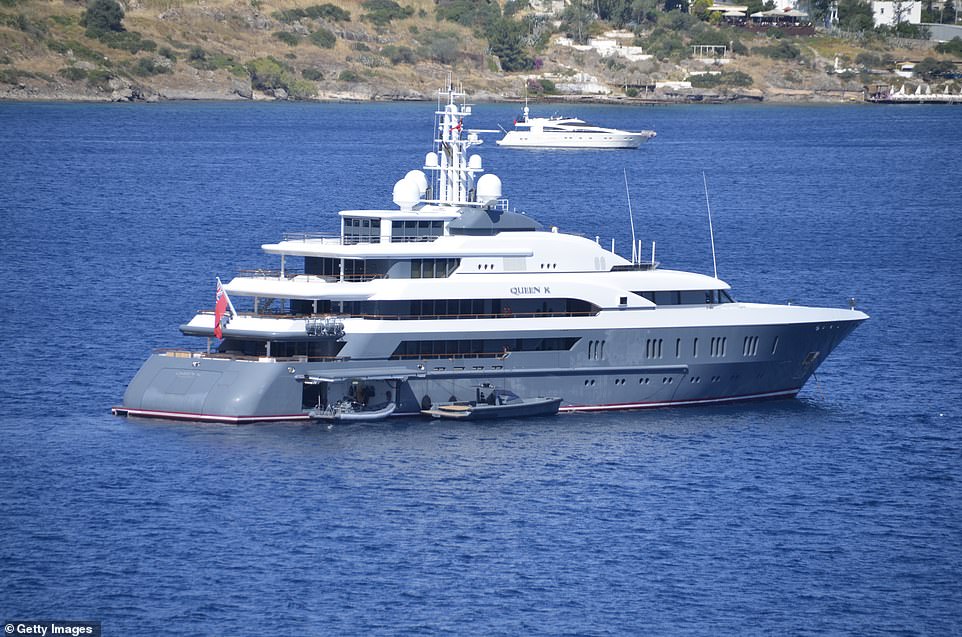 Deripaska, who is sanctioned by the US, was already acquainted with the former Chancellor, having hosted him on his yacht off Corfu in 2008 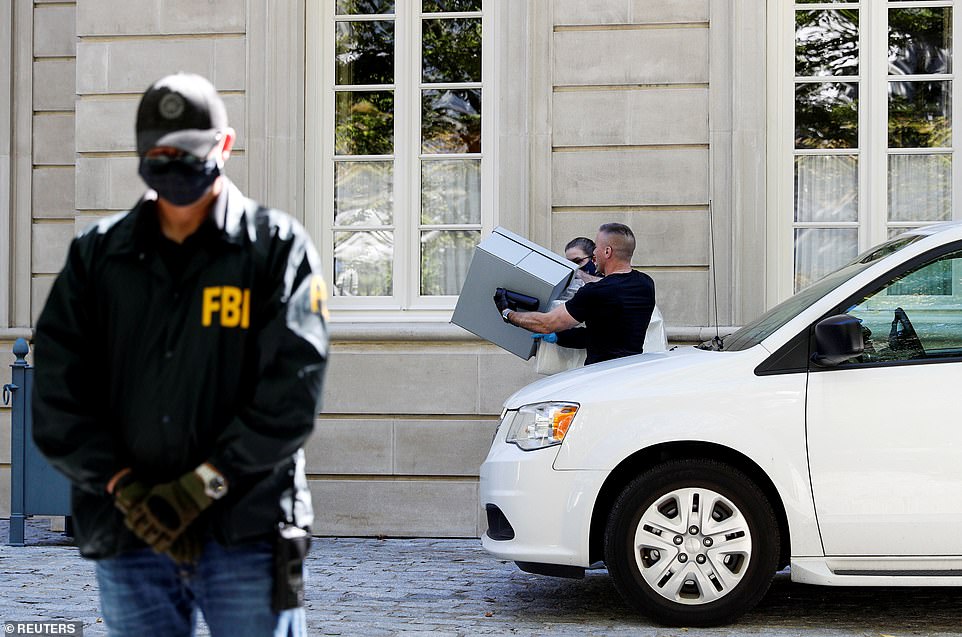 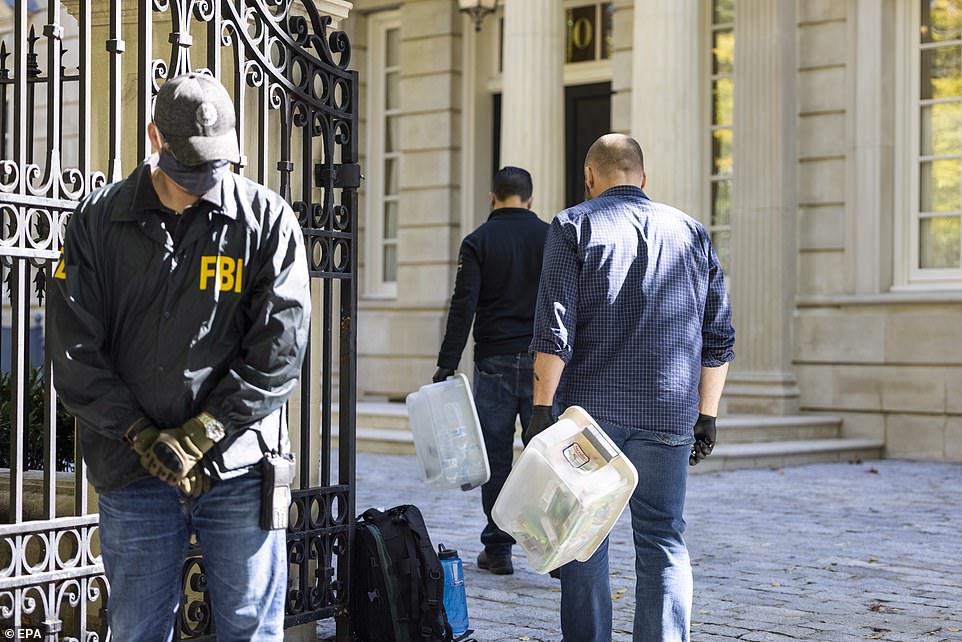 The raids are reportedly connected to US sanctions against Deripaska, which were levied in 2018 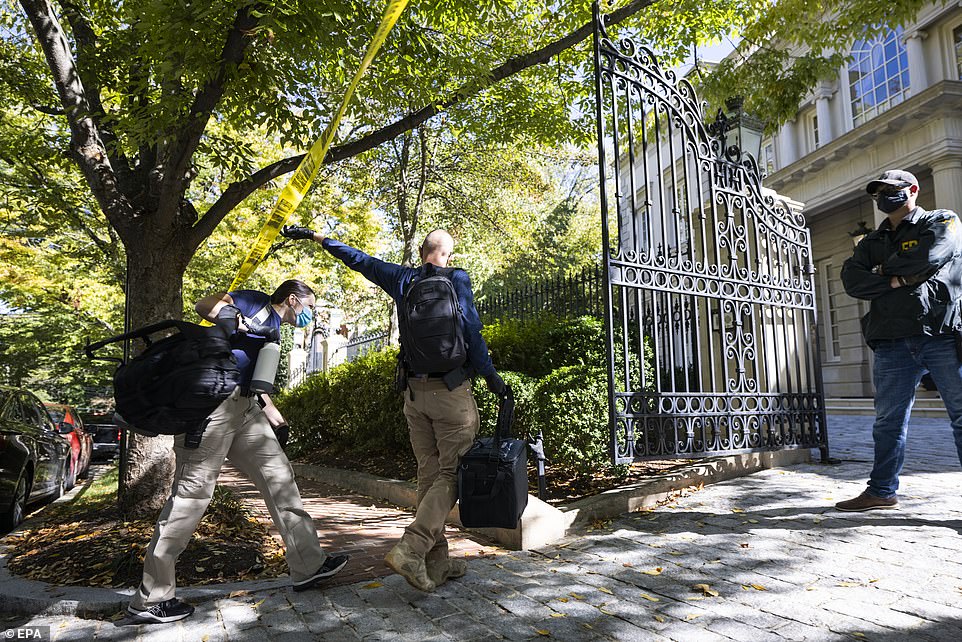 A source told DailyMail.com that Deripaska hasn’t been back to the US since at least 2017 and had no intention of returning 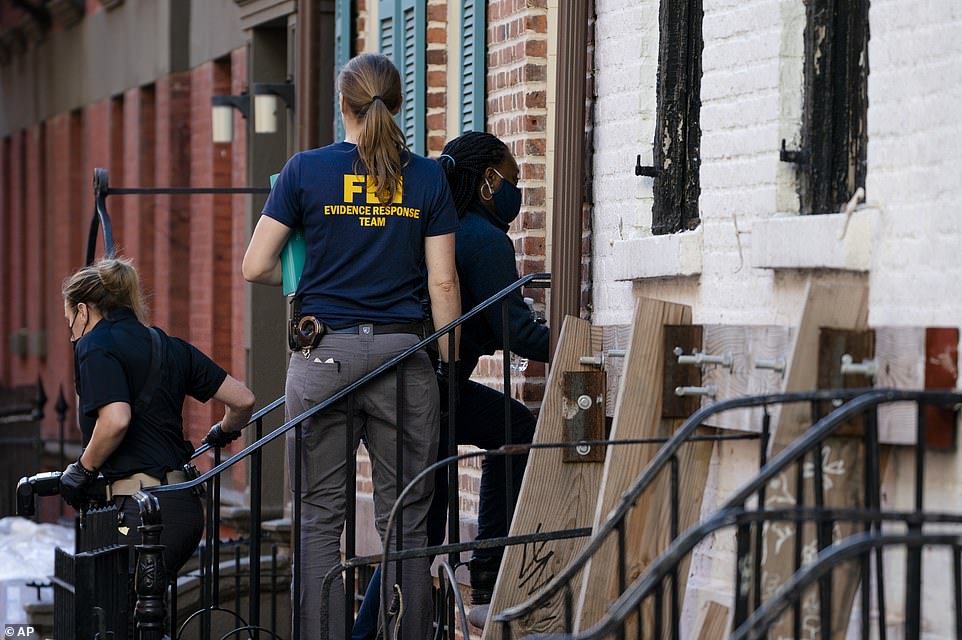 The billionaire’s DC mansion, called the Haft Mansion, is reportedly worth $15 million, according to the Daily Beast.

In August 2020 the bipartisan Senate report detailed allegations that Manafort collaborated with Deripaska during the 2016 presidential election amid Russia’s efforts to interfere in the race.

‘This is what collusion looks like,’ lawmakers wrote of Manafort’s ties to Russian actors.

The report said Deripaska ‘conducts influence operations, frequently in countries where he has a significant economic interest.’

‘The Russian government coordinates with and directs Deripaska on many of his influence operations,’ lawmakers alleged. 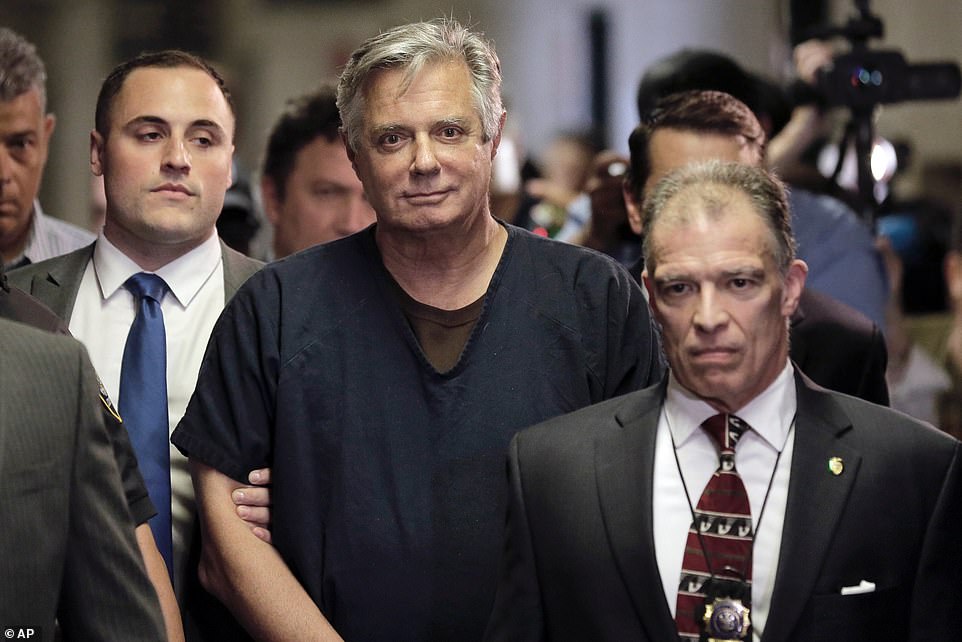 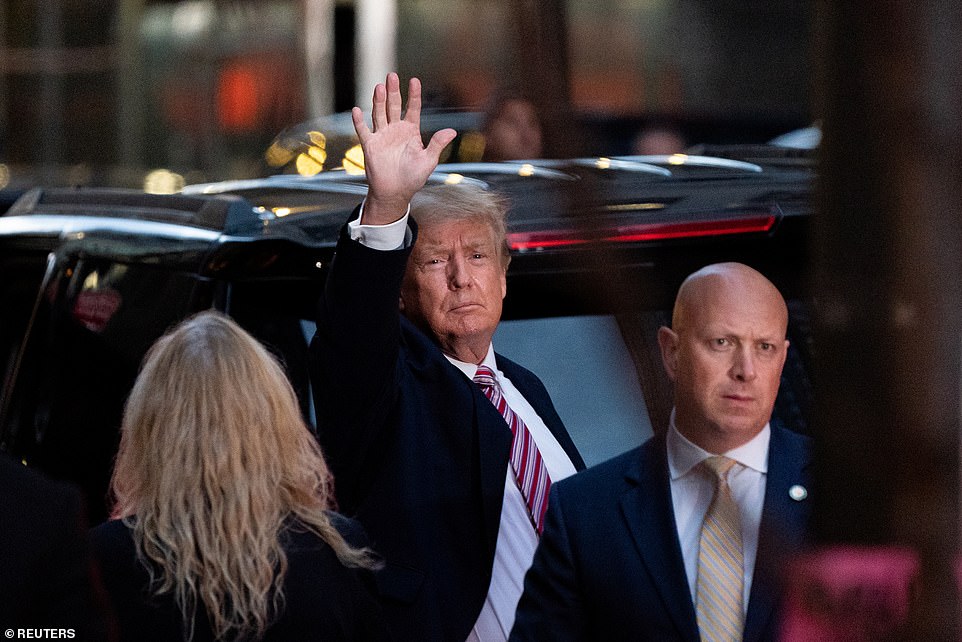 Trump’s Treasury Department levied sanctions against Deripaska in 2018 and accused him of being tied to organized crime (pictured: Trump getting in an SUV in Manhattan on Monday)

US lawmakers claimed that Deripaska ‘had early knowledge of Steele’s work’ only months before he started putting together the Dossier, which was commissioned as opposition research by Democrats including Hillary Clinton.

In 2016 Steele had dismissed claims that Deripaska was a ‘tool’ of the Russian government.

Deripaska was among a group of two dozen Russian oligarchs and officials sanctioned by Trump’s Treasury in April 2018.

They were put in place to punish Russia for ‘malign activity around the globe.’ A statement announcing the economic penalties named a number of specific instances of Russian aggression, including its actions in Crimea and arming the Assad regime in Syria.

It also mentions Russia’s work to ‘subvert Western democracies’ but doesn’t detail any specific allegations about the US. 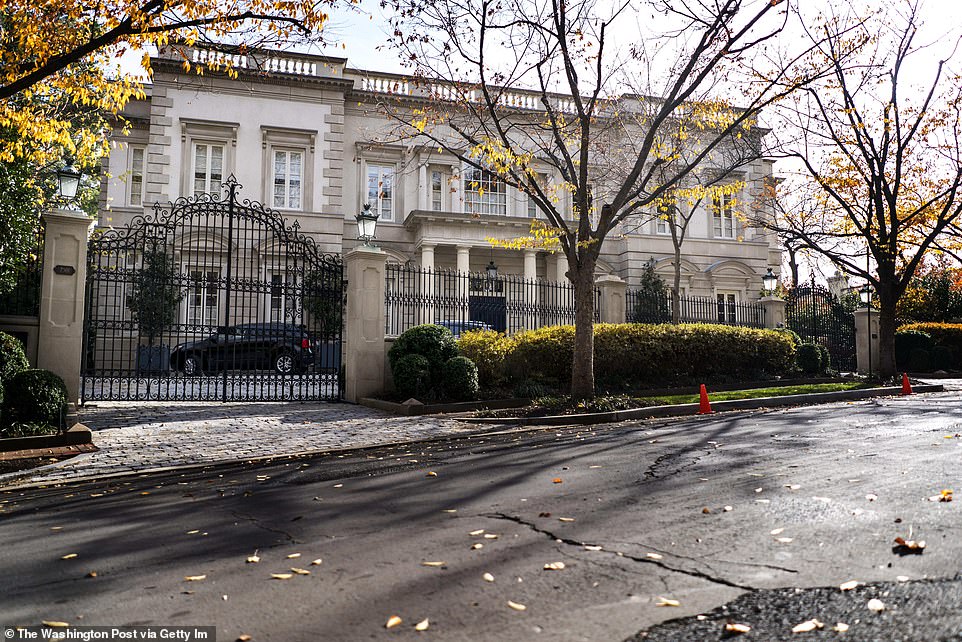 The Treasury accused Deripaska himself of ordering the murder of another businessman and ‘threatening the lives of business rivals, illegally wiretapping a government official, and taking part in extortion and racketeering.’

It also claimed he had ties to organized crime.

When the Trump administration lifted sanctions against companies tied to him they left those against him specifically in place.

He sued to have those lifted in 2019 but in June of this year a judge threw out his lawsuit.

Reports from 2018 indicate that Deripaska was denied a visa to the US multiple times.

But recently, NBC reports, the Kremlin gave him diplomatic status to allow him to enter the US with immunity.

DailyMail.com has reached out to one of Deripaska’s US-based attorneys for comment.

It appears the tycoon’s web of high-power connections extends to the United Kingdom, by way of a former government official in ex-Prime Minister David Cameron’s government.

George Osborne served as UK Chancellor and First Secretary of State under Cameron. Since leaving government he’s made a living as an investment banker.

A corporate advisory firm he joined in April was recruited to help Anglo-Russian metals company EN+ and its subsidiary Rusal negotiate with the world’s largest producer of nickel, the Financial Times reported.

EN+ and Rusal were two of the companies sanctioned and later un-sanctioned by Trump’s Treasury, having been controlled by Deripaska when the measures came down.

Advertisement [ad_1] The number of people in NSW hospitals with COVID-19 has also dropped, with 589 in hospital with the virus, 128 of whom are in intensive care. [ad_2] Advertisement 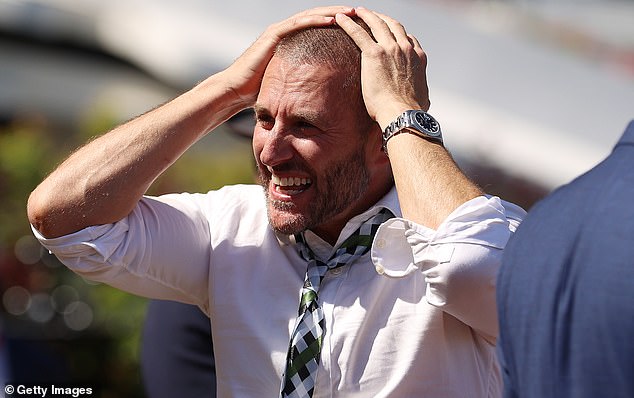 Advertisement Melbourne Cup winner fined $10,000 for breaching rules while celebrating the ‘once in a lifetime’ victory Brae Sokolski fined $10,000 for leaving ‘green zone’ at Flemington Racecourse Part-owner of Verry Elleegant entered mounting yard to celebrate on Tuesday The exclusive yard is reserved for jockeys, trainers and horse racing officials Mr Sokolski is also a part-owner… 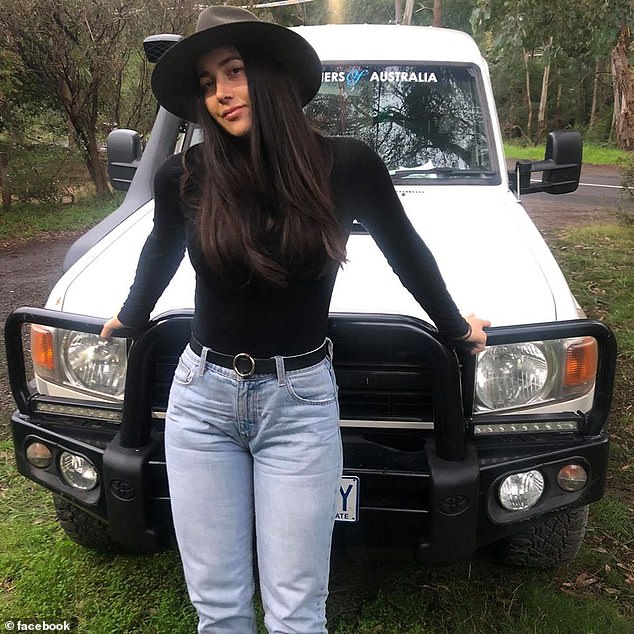 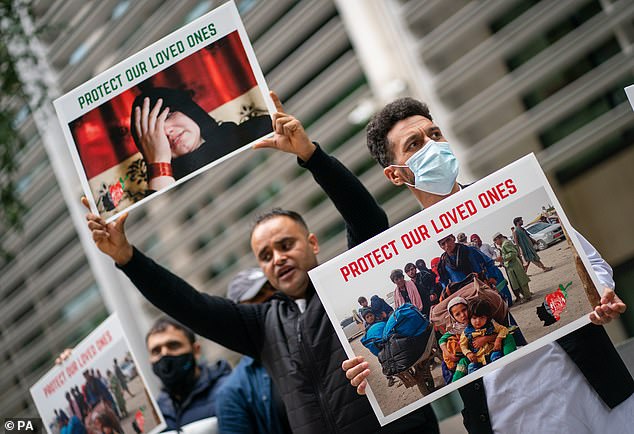 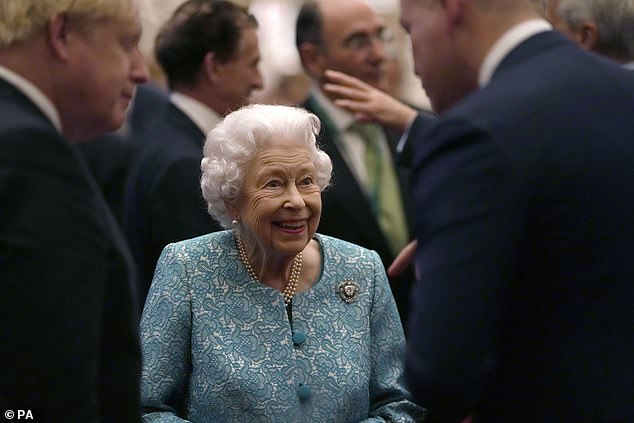 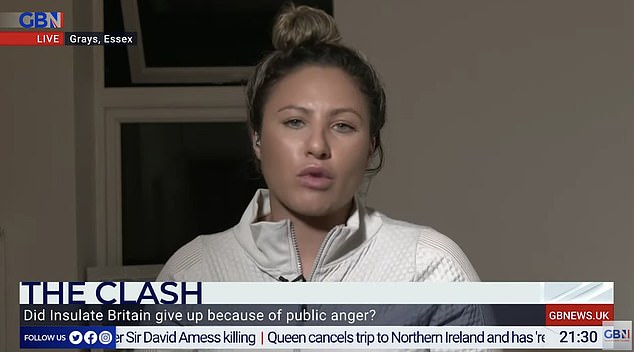 Advertisement [ad_1] A furious mother who rammed Insulate Britain activists with her Range Rover today branded the group ‘terrorists’ as she claimed the women she hit faked their ‘ow ow’ cries.  Sherrilyn Speid, 34, was accused of ‘attempted murder’ by one climate activist after she gently drove her car into protesters blocking traffic lights at…