The body of a 32-year-old Georgia man has been missing for over three years after a medical examiner tried to ship the human remains through FedEx.

Jeffrey Merriweather’s body was found partially decomposed in Atlanta in 2019, prompting the medical examiner to ship it to a special trauma lab in St. Louis. The body, however, never arrived at its destination, according to the company.

Three years later, Merriweather’s remains are still nowhere to be found, and FedEx has not been able to provide a location for the body.

On Thursday, after the Atlanta Journal-Constitution published a story about Merriweather on Twitter — and tagged the company in the post — FedEx responded with what seemed to be a bot, tweeting, ‘This is not the experience we want to provide. I am very sorry for the pending delivery. Please send a direct message, I would be happy to assist.’ 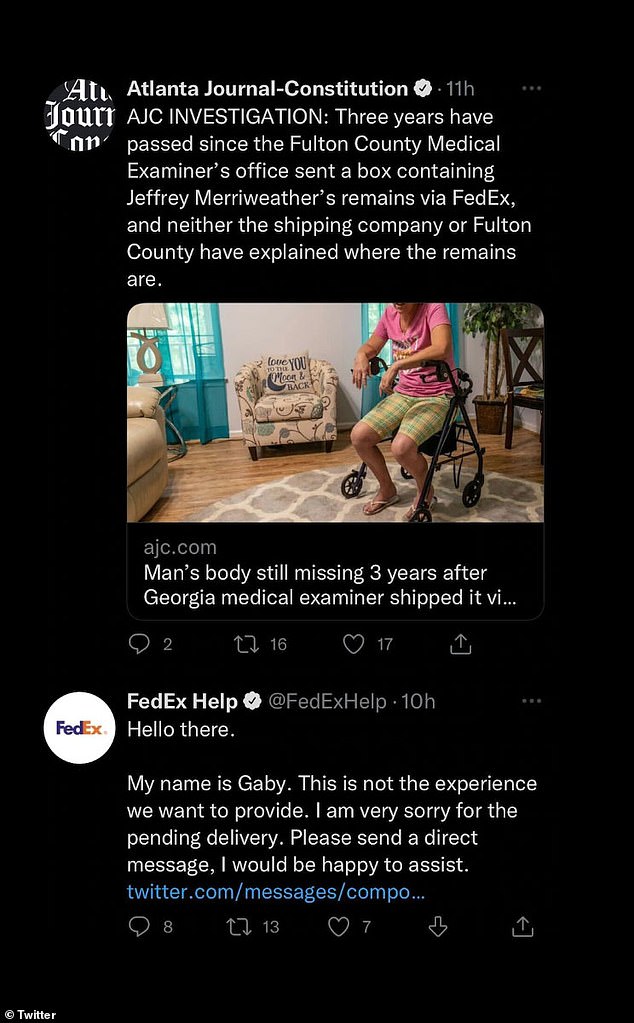 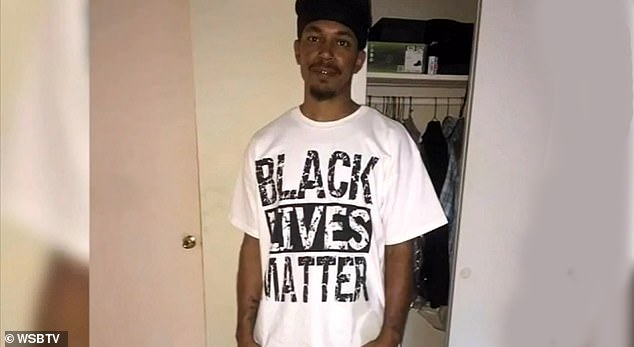 Jeffrey Merriweather was found dead behind an Atlanta house at age 32. The Fulton County Medical Examiner’s Office attempted to ship Merriweather’s remains to a lab in St. Louis, but three years later, his remains are still missing

Twitter users were quick to point out that FedEx using a Twitter bot to respond to a story about someone’s missing remains was insensitive.

Jennifer Brett, a senior editor of the Journal-Constitution, snapped back at the automated tweet: ‘AI is not always the answer,’ she tweeted.

The FedEx tweet has now been deleted, and FedEx faces renewed questions about the body’s whereabouts and their lack of coherent response to the issue.

‘It’s a nightmare you can’t wake up from,’ Kathleen Merriweather, Jeffrey’s mother, told the Journal-Constitution.

According to the company’s user manual, human remains are forbidden from being posted using FedEx. The US Postal Service offers to courier them, but only under strict guidelines.

Usually, remains are transported across state lines using an airplane. It is unclear what form of transportation Merriweather’s remains were moved by.

A FedEx spokesperson told DailyMail.com that customers should not use FedEx to ship human remains when asked for comment on the situation.

‘Shipments of this nature are prohibited within the FedEx network,’ according to a statement from the company. ‘Our thoughts and concerns remain with the family of Mr. Merriweather, however, we request that further questions be directed to the Fulton County Medical Examiner’s Office.’

Fulton County Medical Examiner’s Office could not be reached for comment, and it remains unclear why they used FedEx to ship the remains to St. Louis in the first place. 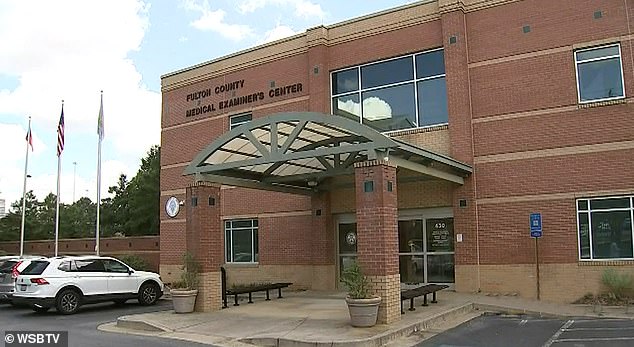 Merriweather’s body was found behind a house in Atlanta, Georgia on June 19, 2019. Police suspect he was the victim of a shooting after a drug deal gone wrong, but questions remain over the circumstances of his death.

A few months after the discovery of his body, Jan Gorniack, then the chief medical examiner for Fulton County, said ‘since he was partially skeletonized, we couldn’t determine a cause of death.’

Gorniack also said ‘From the tracking number, the last known location was Austell, Georgia,’ which may provide a clue in the mystery.

Austell is home to a notoriously unreliable FedEx processing facility which has been criticized in recent years for the large number of packages that go missing on their watch.

The Austell location, which is approximately 17 miles west of Atlanta, has a 1.4/5 rating on Google and a brief read through the reviews paints a bad picture.

‘It is so bad it makes me want to move so I don’t have to deal with this place,’ said one Georgia resident. Another said ‘packages through this facility never arrive on time.’

Customers that had to use the Austell facility became so irritated by it that over 4,200 people signed a Change.org petition titled ‘Where are the packages? FedEx Austell.’

A photo of FedEx’s Austell, Georgia facility that was the last known location Merriweather’s remains. The Austell facility is notoriously unreliable and many nearby residents complain of losing their packages there 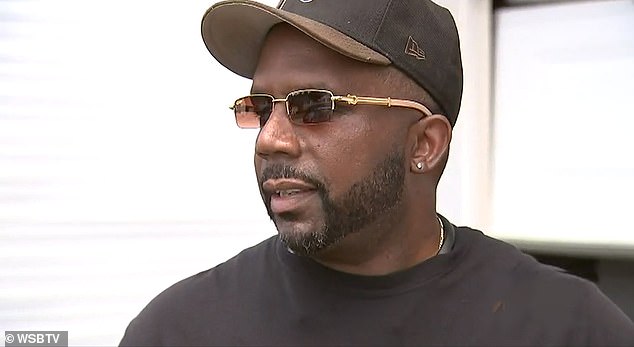 Jeffrey Merriweather Sr, Merriweather’s father, said he doesn’t understand how they were able to lose his sons body. ‘At this point in time, all I want is what’s left of my son and put him to rest’

‘I don’t know how this could have happened when you got to sign for stuff,’ said Jeffrey Merriweather Sr, Merriweather’s father. ‘You got tracking numbers.’

The Merriweather family has repeatedly called for accountability from both FedEx and the Fulton County Medical Examiner’s Office, but so far they don’t have many clear answers.

They said the medical examiner told them the remains had made it to St. Louis, and then claimed they had been speaking to the wrong person, and weren’t sure where the remains are.

‘At this point in time, all I want is what’s left of my son and put him to rest,’ said Merriweather’s father.