The ticket attendant at the Dollywood theme park entrance catches my accent. ‘I hear that Dolly Parton is a big deal in the UK,’ he says, before dropping his voice to a whisper: ‘Then again, I always think people are a bit weird if they don’t love Dolly.’

He’s got a point. A quick glance around Dolly’s amusement park, situated in the foothills of the Great Smoky Mountains National Park in East Tennessee, confirms that regardless of age, wealth, nationality or politics, Dolly Parton has become a living icon.

Now aged 76, Dolly shows absolutely no signs of slowing down. Her online back catalogue has hit a staggering three billion streams, plus she’s just released a debut novel alongside her 48th solo album, both entitled Run, Rose, Run. 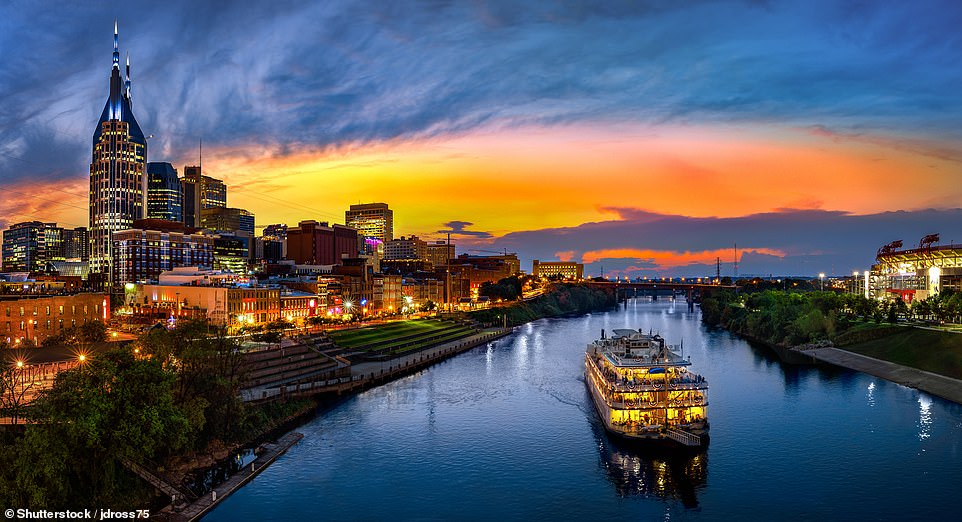 Bright lights, big city: Zoey Goto sets off on a Dolly Parton themed tour of Tennessee, taking her from the singer’s birthplace in the Smokies to the city of Nashville (pictured), where she now lives 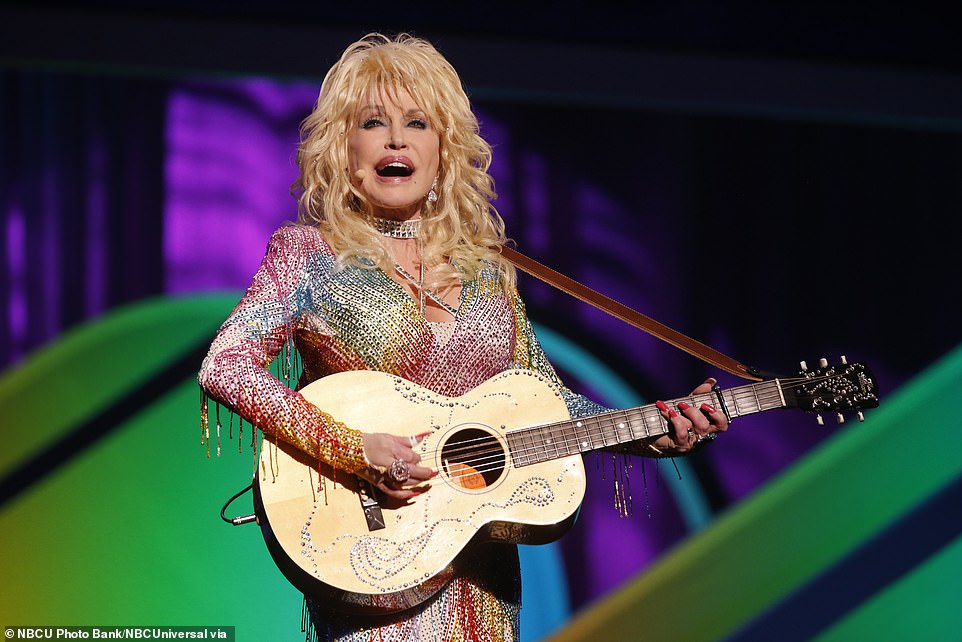 Which makes 2022 the perfect time for a Dolly Parton-themed trip around Tennessee. Few superstars have stayed as close to the nest as Dolly, who has migrated just three hours away from her birthplace in the Smokies to the city of Nashville, which provides an easy-to-navigate, fun-packed itinerary.

For the true Dolly devotee, the first stop has to be her childhood log cabin in Locust Ridge, deep in the hills of Sevierville and just a few miles from Dollywood.

Lovingly referred to by Dolly as a place where ‘life is as peaceful as baby’s sigh’, the cabin was immortalised on the cover of her 1973 record My Tennessee Mountain Home. Here Dolly grew up with her 11 siblings in rural poverty – her father paid the doctor who delivered her with a bag of grain. 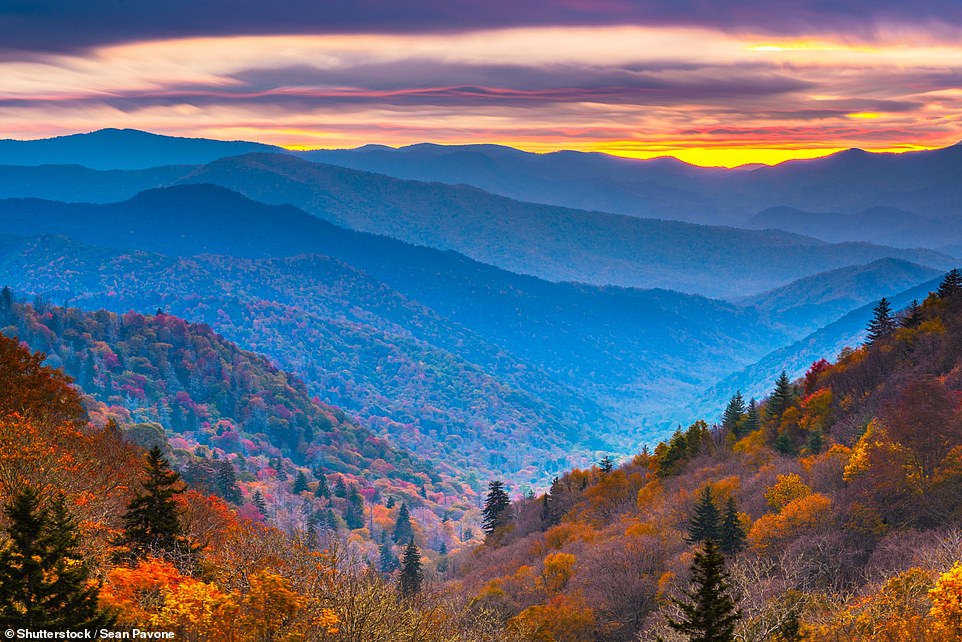 ‘The Great Smoky Mountains, pictured above, may have raised Dolly,’ Zoey remarks 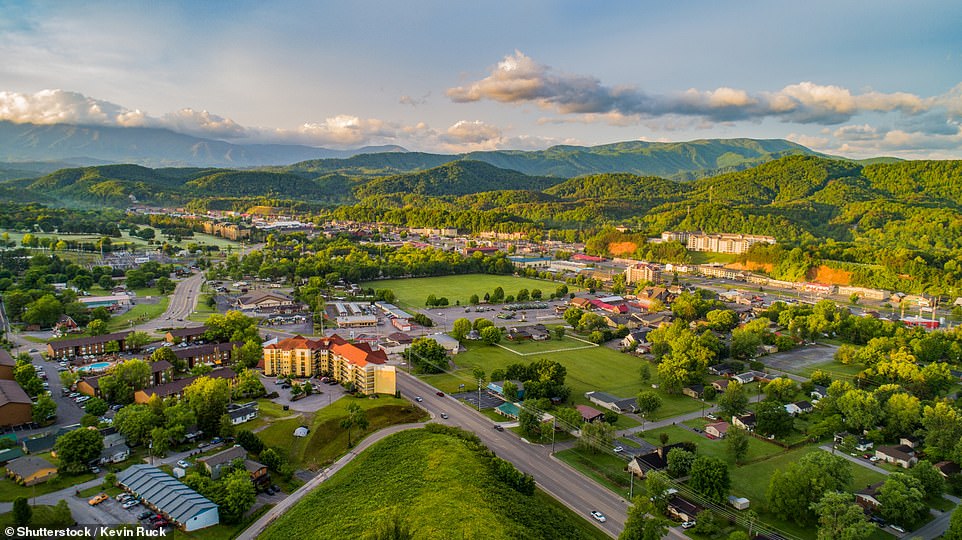 While you’re in the Sevierville area (pictured), be sure to stop off at Courthouse Square for a photo with the bronze Dolly Parton statue honouring their home-town megastar 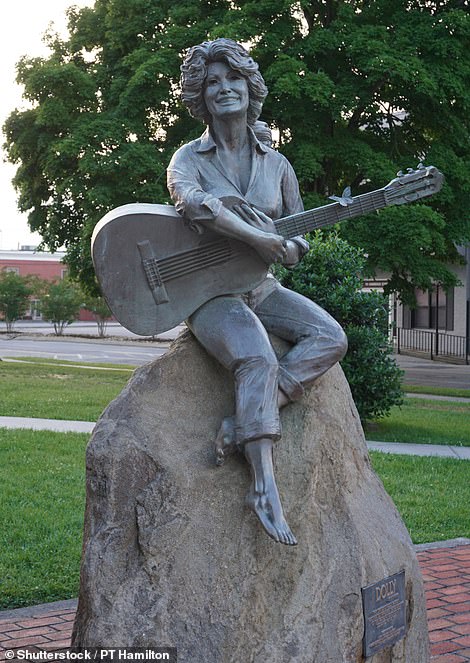 Dolly has said in the past: ‘We had everything we needed, including running water – as long as you were willing to run and get it!’

Locust Ridge is still remote, so driving there means taking a right turn after the pretty white clapboard Baptist church and driving down the declining hairpin gravel path until the property appears like a rustic mirage.

Dolly now uses the cabin as her song-writing retreat, so high fences surround it, but you can see the exterior and the front porch that acted as little Dolly’s debut stage.

And while the cabin is startlingly basic, the beauty of the surrounding Appalachian hills filled with birdsong, running alongside a babbling creek where the Parton children once played, makes her childhood seem surprisingly idyllic.

If you’d rather see Dolly’s cabin minus the twisting rural roads, then head straight to the Dollywood theme park in Pigeon Forge. Here you’ll find a replica of the two-room home, painstakingly reconstructed by Dolly’s brother and mother using original family treasures, including patchwork quilts and a dinky iron wash basin.

‘I just don’t understand how they crammed so many kids in here,’ the woman next to me marvels aloud as we ‘tour’ the house, which takes all of about ten paces. 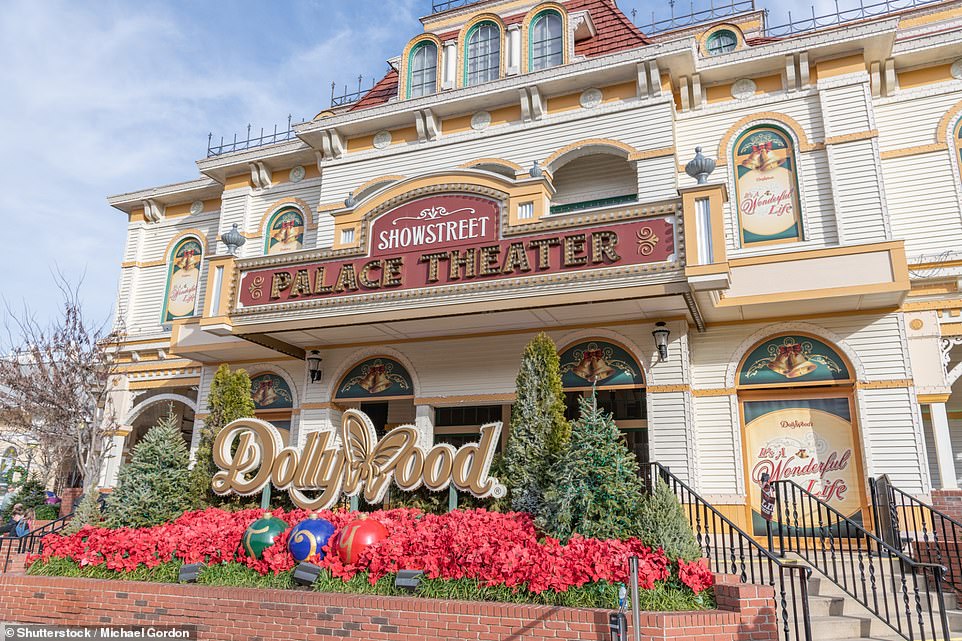 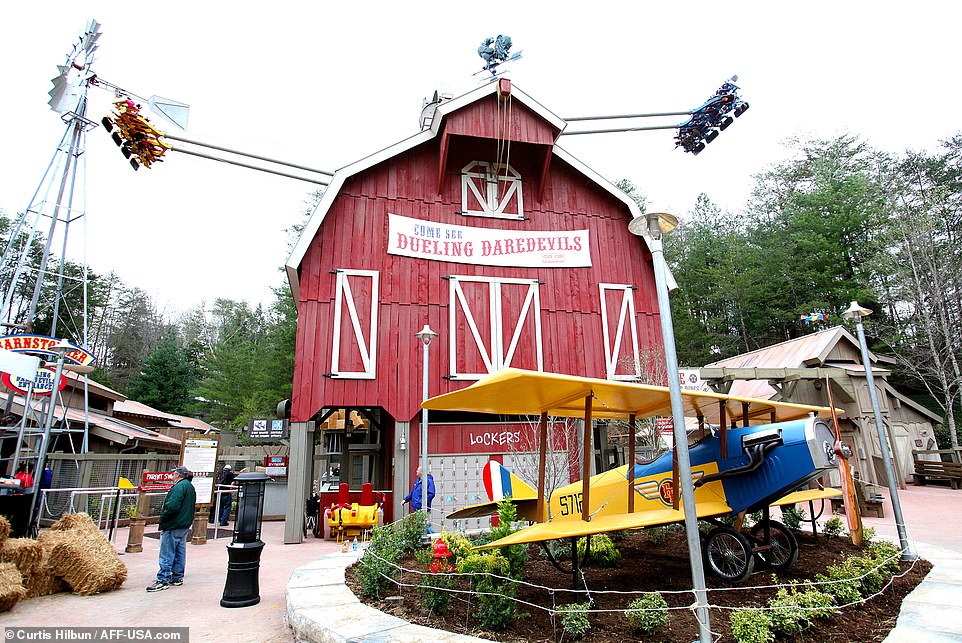 Thrill-seekers can soar like an eagle on madcap rollercoasters at Dollywood, pictured

Dolly’s Disney-gone-country theme park opened in 1986 and attracts more than three million visitors a year. The beauty of Dollywood is that there’s something for everyone here – thrill-seekers can soar like an eagle on madcap rollercoasters, while those with an interest in Appalachian culture can watch displays of glass-blowing, blacksmiths at work or talented local musicians performing bluegrass.

Never one to leave a rhinestone unturned, Dolly’s flamboyant costumes are displayed in the Chasing Rainbows Museum, where a hologram of the singer cheerfully greets guests.

Outside you can board Dolly’s now-retired tour bus, which she dubbed the Gypsy Wagon. While it was designed by her road manager to cover the 2,000 miles from Nashville to Los Angeles without refuelling, apparently that rarely happened as Dolly insisted on pit stops for southern barbecues along the way. 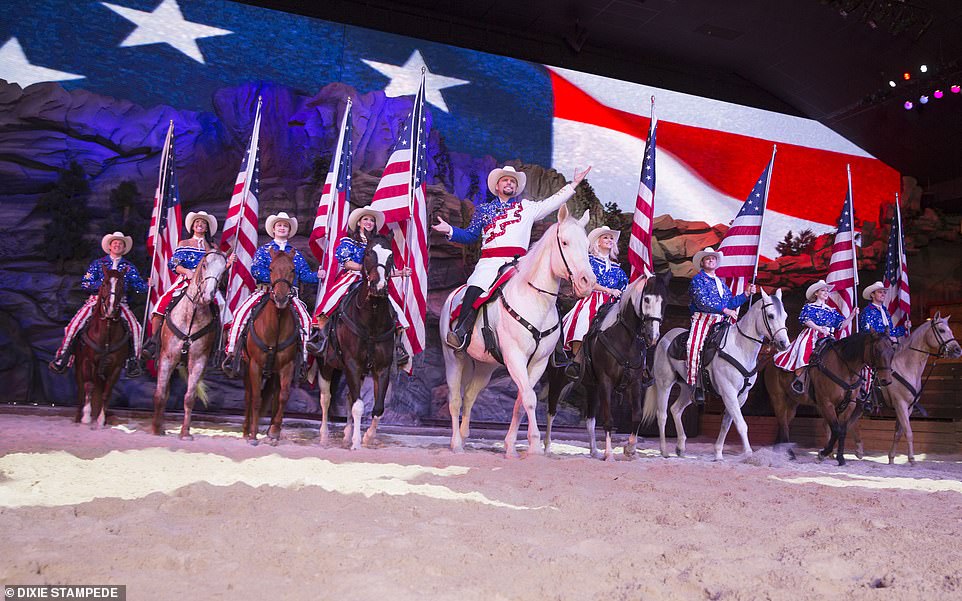 Above is entertainment USA-style at the Dolly Parton Stampede show, a Wild West extravaganza in Pigeon Forge

Dolly claims her only weaknesses are food and men (in that order), so follow in her footsteps to local favourite Frank Allen’s Market & Grill, situated in an unassuming gas station in Sevierville.

This retro diner serves southern country classics on Formica tables and looks to have barely changed since it opened in 1953. Dolly’s favourite dish on the menu is the slaw dog – a hot dog with coleslaw topping – although if you feel particularly ravenous, there’s the super grandaddy sandwich, measuring a hefty 2ft long.

While you’re in the Sevierville area, be sure to stop off at Courthouse Square for a photo with the bronze Dolly Parton statue honouring their home-town megastar. So proud was Dolly’s father of the monument that he used to come down in the dead of night with a mop to wash the pigeon poop off his daughter’s shoulders. 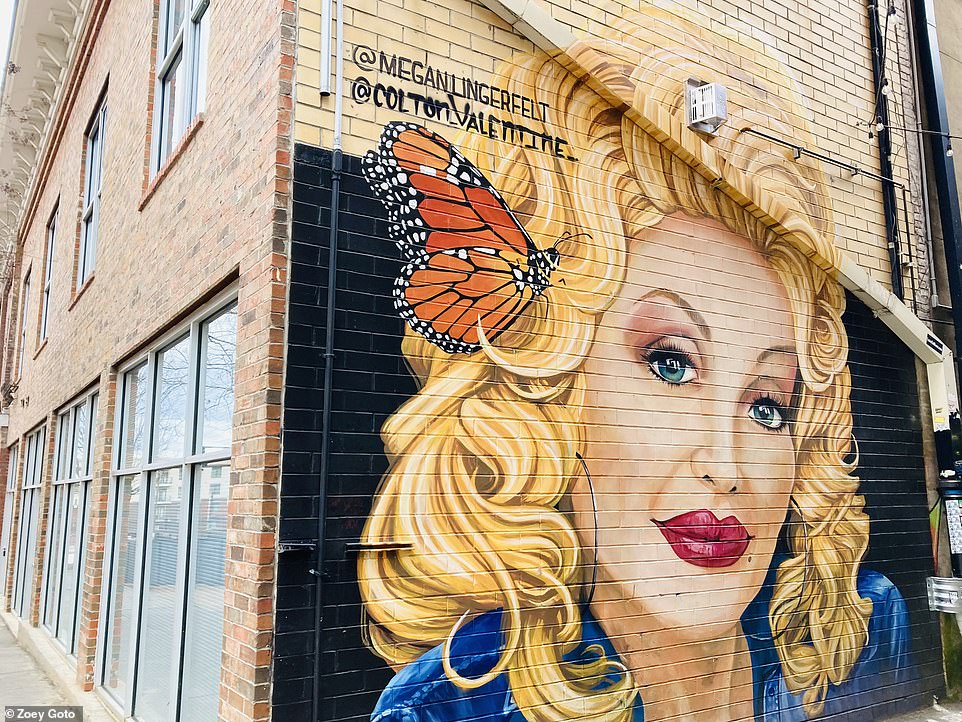 From Sevierville, it’s just a short drive to nearby Knoxville, which oozes small-town nostalgia and boasts Tennessee’s most beautiful Dolly Parton street mural.

For a boot-stomping riot of a night out, head to the Dolly Parton Stampede in Pigeon Forge. This Wild West extravaganza takes place in a 1,000-seat arena where you’ll be served a four-course meal while watching a live show featuring cowgirls on horseback leaping through flaming rings of fire and a nail-biting race involving piglets in miniature jackets.

The best place to lay your head in the Smokies is, of course, Dollywood’s DreamMore Resort. With rocking chairs out on the front porch overlooking the misty mountains, roaring fire pits and the kind of warm welcome that makes you feel like family, this 300-room resort taps into that renowned southern charm and hospitality. 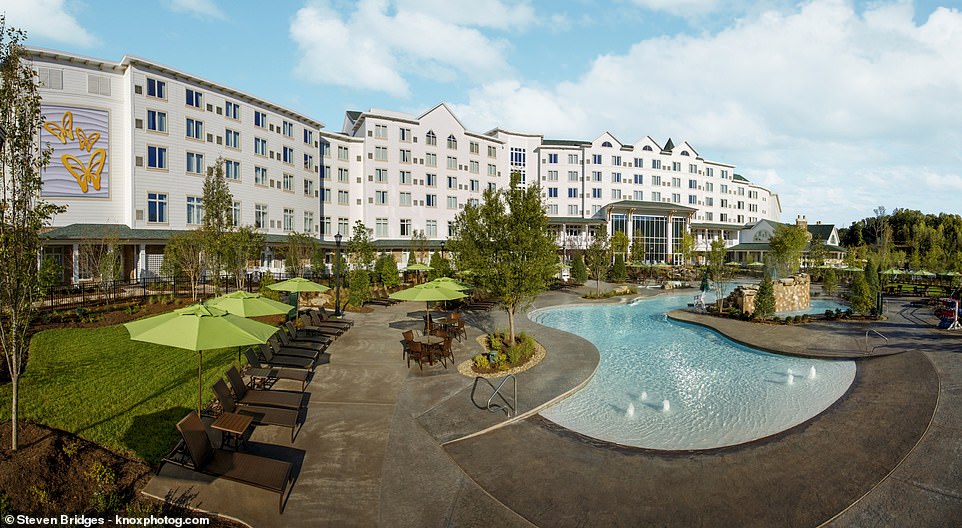 Zoey writes: ‘The best place to lay your head in the Smokies is, of course, Dollywood’s DreamMore Resort (pictured)’ 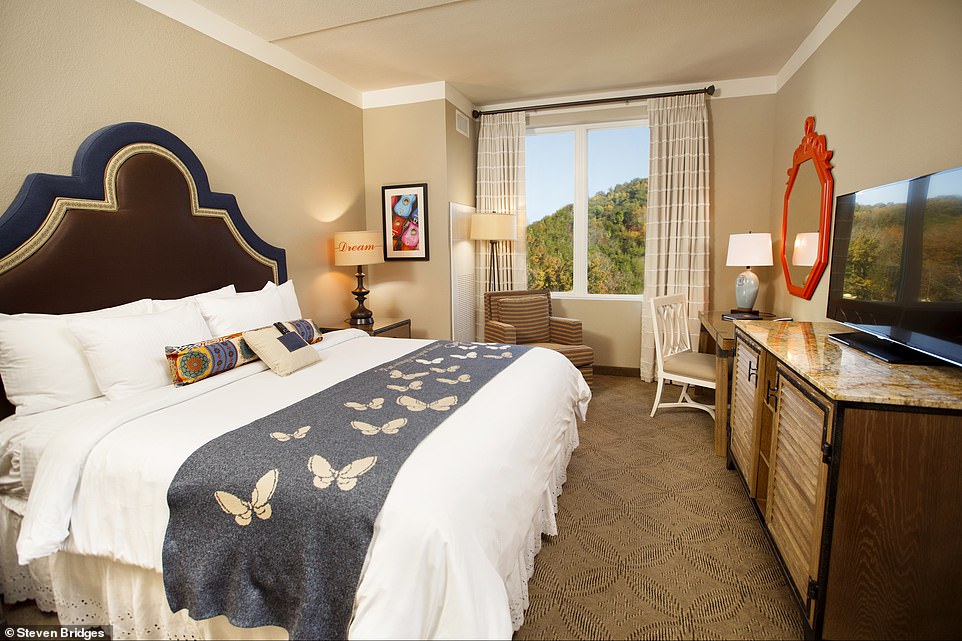 Dolly references are lavishly sprinkled throughout the interiors at DreamMore Resort, such as her butterfly motif that flutters across the carpets and bedspreads 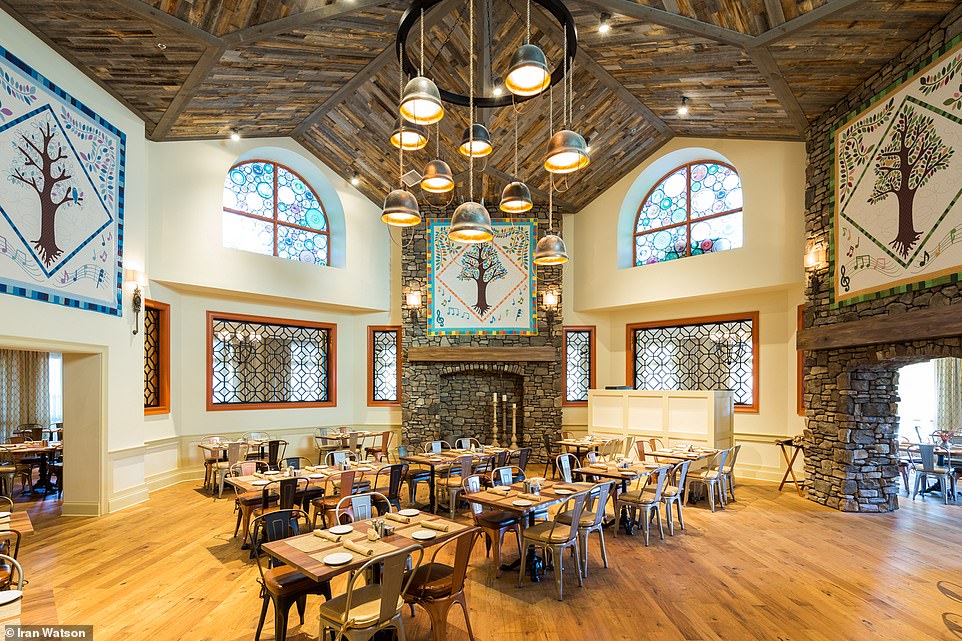 Above is the dining room at the Song and Hearth southern restaurant in DreamMore Resort. ‘Dolly claims her only weaknesses are food and men (in that order),’ writes Zoey

Although Dolly references are lavishly sprinkled throughout the interiors, from her butterfly motif fluttering across the carpets and bedspreads, to display cases of her bejewelled musical instruments decorating the walls, this isn’t just a place for fans. The resort is a popular spot for multi-generational family gatherings, evident in the groups of grandparents and grandkids relaxing around the fireplace in the spacious lobby.

Suites can sleep up to eight with interconnecting rooms, and there’s a child-friendly indoor pool and plenty of dining options, including a bakery serving up a phenomenal cinnamon bread loaf.

The hot ticket room here is the Dolly Parton Suite, an ultra-glam apartment with a four-poster bed which the Queen of Country uses when she’s in town. 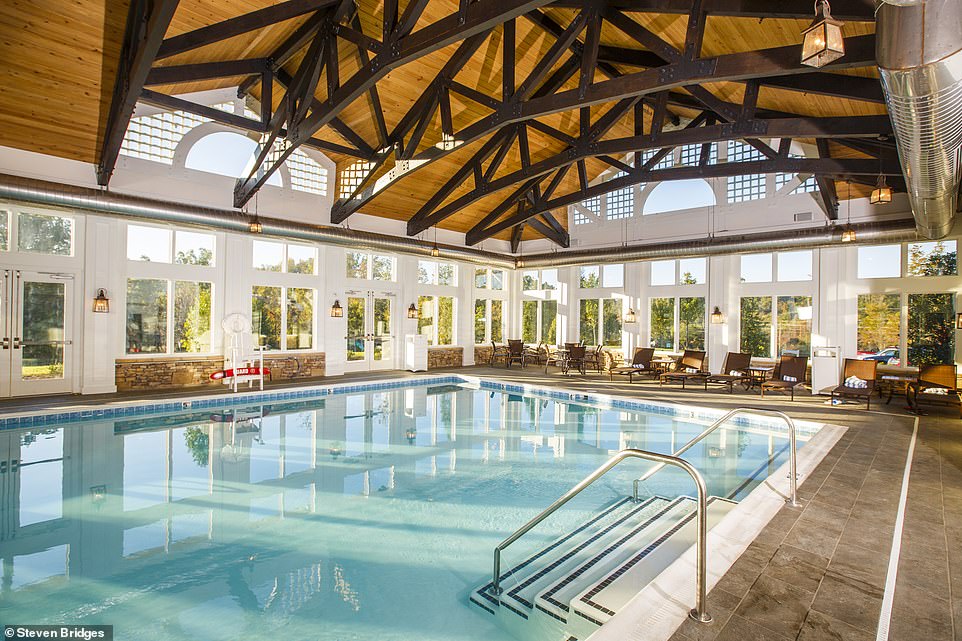 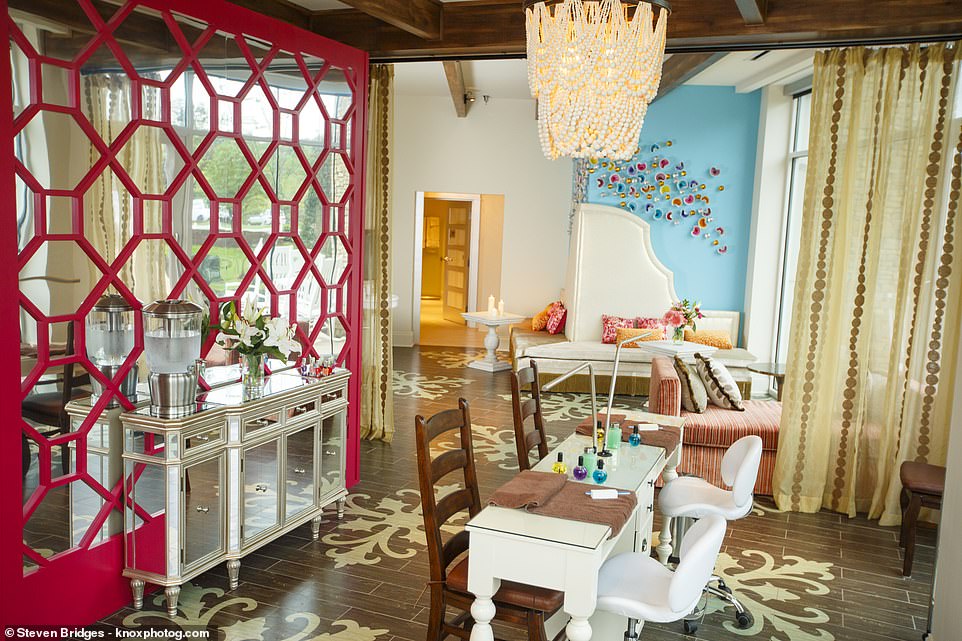 The spa area at DreamMore. According to Zoey, this 300-room resort taps into southern charm and hospitality

While the Great Smoky Mountains may have raised Dolly, it’s the city of Nashville, situated three hours to the west, that truly made her a star.

The day after graduating from high school, Dolly hopped on a Greyhound bus and headed for Music City, armed with a few plastic bags of clothes and a supersized cup of ambition.

When you arrive in Nashville, make sure you book a tour of RCA Studio B on Music Row. This small but mighty hit factory has pumped out an impressive 35,000 songs from the likes of Elvis Presley and Roy Orbison, as well as Dolly’s Coat Of Many Colors, recounting the humiliation of being mocked as a child for wearing a coat made from rags. 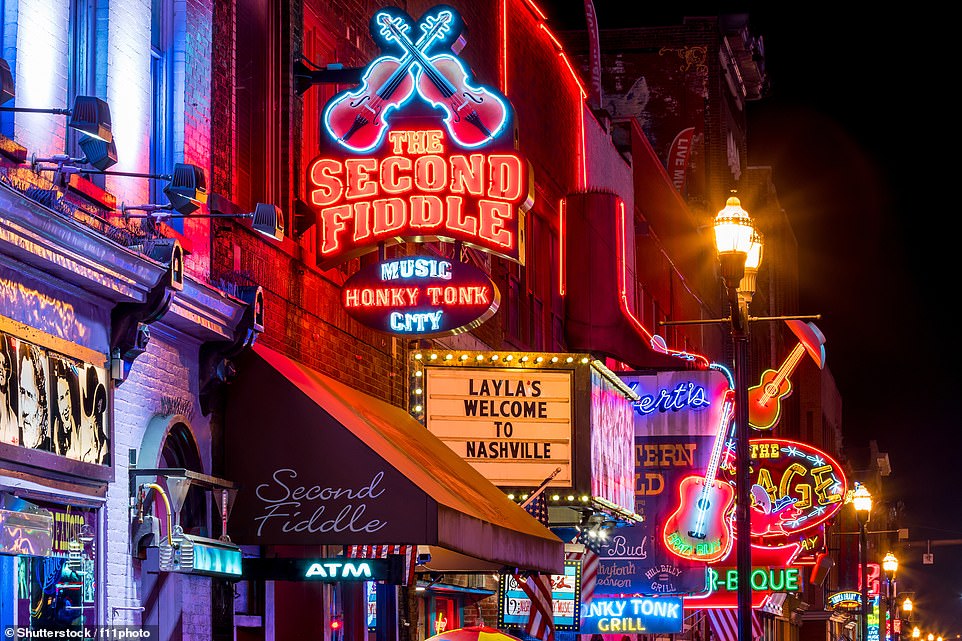 The day after graduating from high school, Dolly hopped on a Greyhound bus and headed for Nashville, Music City (pictured)

Zoey Goto was a guest of the Tennessee Department of Tourist Development. America As You Like It offers a ten-night fly-drive to Tennessee from £1,929pp, based on two sharing. It includes return flights with BA from Heathrow to Nashville, car hire, four nights at the Doubletree Downtown in Nashville, three at Dollywood’s DreamMore Resort and three at the Crowne Plaza in Knoxville (americaasyoulikeit.com).

In the studio car park, look for a knee-high patch of brickwork that looks a little odd – it is the exact spot where, on her first day at the studio, Dolly accidentally ploughed her car right into the wall.

‘Bricks were still falling on to the hood of my car as I walked nonchalantly into the recording session, as if nothing bad had happened,’ the legend later joked.

Round off your road trip with a night or two at Graduate Nashville, a hip boutique hotel where Dolly is love-bombed throughout the fabulous interiors.

The hotel has become a hit as a girls’ getaway – a sanctuary where friends come to sip fuchsia cocktails and devour Twinkies flaked with edible gold at the rooftop White Limozeen bar, named after Dolly’s anthem, before drifting off to sleep in canopy beds under the watchful eye of Dolly portraits. Appreciation for the singer is taken to the next level in the 9 To 5 suite. Alongside the glitterball ceiling and hot pink neon sign of her famous quote ‘It costs a lot of money to look this cheap’, there’s wallpaper covered with illustrations of Dolly.

Venturing downstairs to the hotel’s Americana-themed Cross-Eyed Critters karaoke bar, a group of young women take to the stage to belt out renditions of Dolly’s greatest hits.

As the crowd unites for the chorus of everyone’s favourite break-up song, immortalised by Whitney Houston, it’s the perfect reminder that, Dolly Parton, we will always love you.