A former Met Police officer has found a new passion after 30 years of law enforcement – performing as a stripping policewoman instead.

Michelle Walton, 51, from Yarmouth on the Isle of Wight, served on the UK force for three decades, dealing with hard-hitting crime and strict rules.

But she always like the idea of stripping off and even took a year out in the late 90s to work in a topless bar in Australia.

Now, having retired in 2020, she is part of a cabaret group and strips for charity at events. 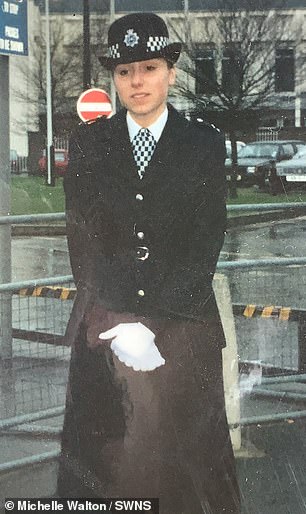 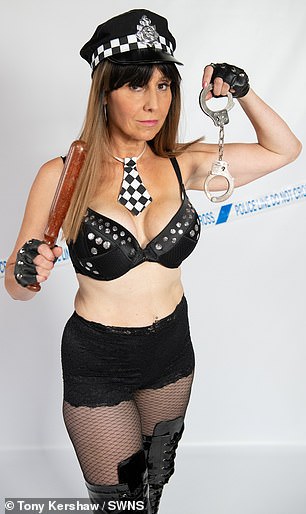 Pictured left: Michelle when she joined the force back in 1989, where she spent seven years in the Met Police. Pictured right: Michelle now enjoys stripping in the character of a policewoman 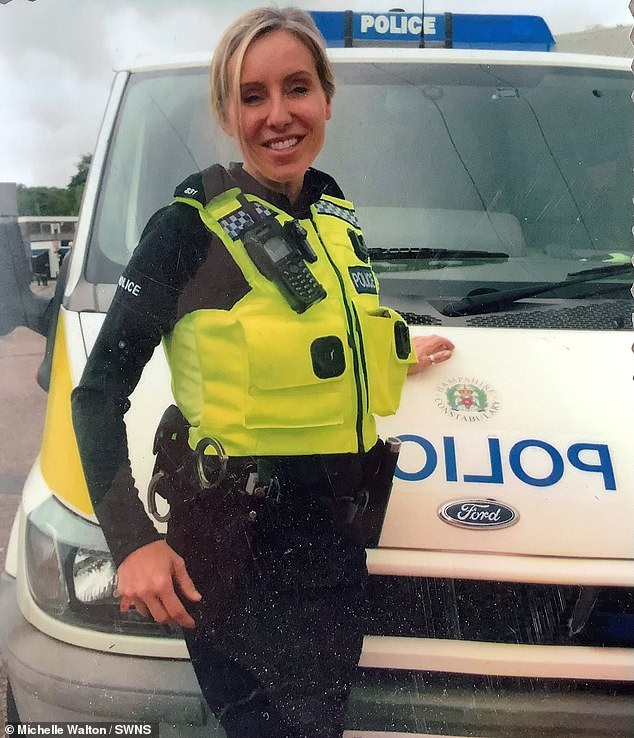 Michelle during her long policing career – she took unpaid leave in the 90’s to work as a nude waitress in Australia, but was ‘careful who she told’

Michelle, makes sure to incorporate her old career into her routine.

She wears a police uniform, uses handcuffs and a truncheon – and arrests audience members for ‘being too sexy’.

Michelle said: ‘For me, stripping is about female empowerment and loving yourself.

‘I’m not a skilled dancer, I just love my body and love getting my kit off after 30 years of restrictions on what I could and couldn’t do.’

Michelle says she joined the Metropolitan Police as a cadet in 1989, aged 18.

She then became a PC with the force in August 1990, working in south-east London, before transferring to Hampshire Police seven years later.

Michelle says she loved her job, and was always conscious of what she got up to in her free time because of the nature of her work.

Even so, she took a year’s unpaid leave in 1999 when she worked as a topless barmaid.

She wanted to see the world while she was still young, and chose Australia to jet off on her travels.

There she did a year of raunchy bar work, earning just as much money as if she’d been working as a police officer in the UK. 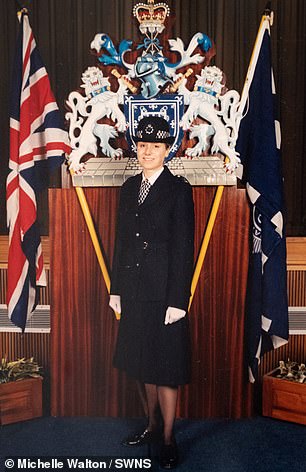 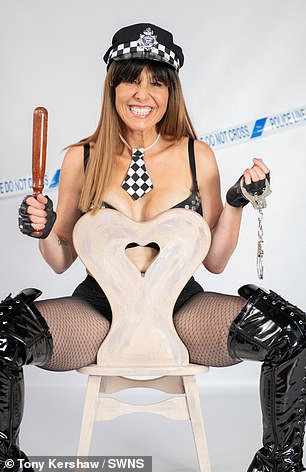 Now and then: Michelle has lost several parts of her uniform over the years, but is still ‘arresting people’ – pictured right now and pictured left her first days of the force 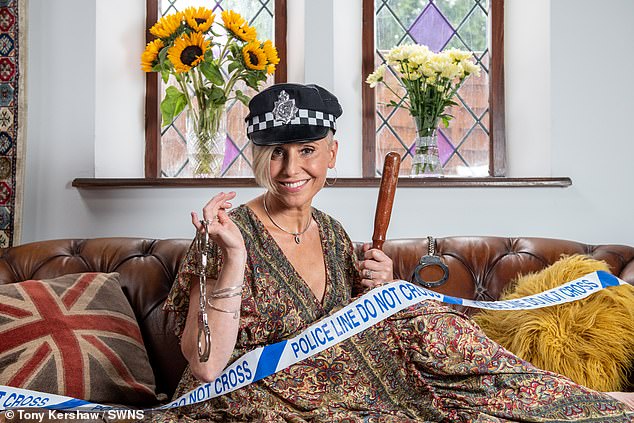 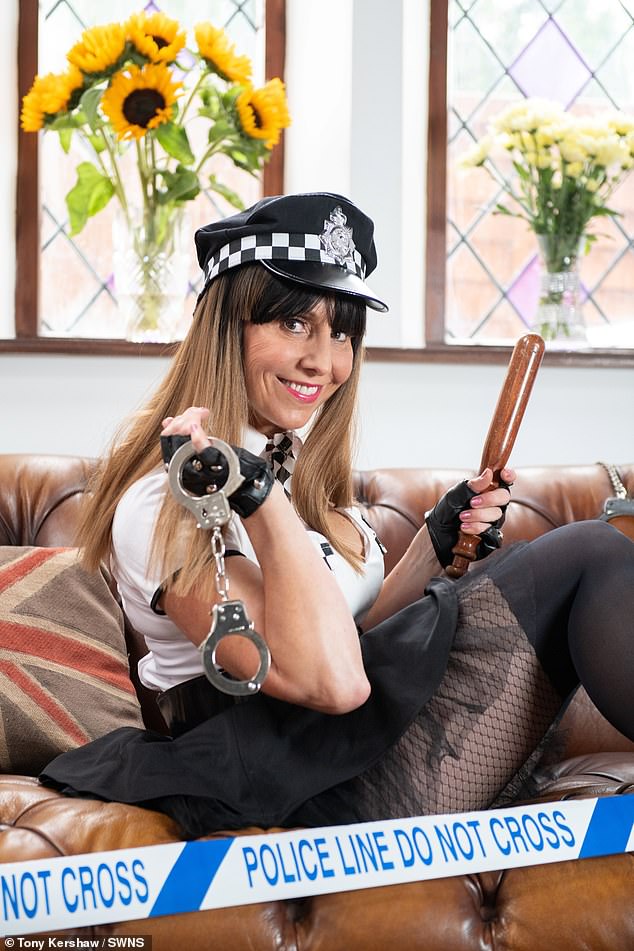 Michelle said: ‘When I got to Australia, I needed a job so I became a skimpy bar maid, which involved working in pubs in my underwear, then flashing my boobs off for money.

‘My work progressed to doing topless and nude waitressing, but there was never any groping or sex involved.

‘My clients were anything from businessmen to biker gangs – I met so many different people while I was out there.

‘I’ve had several boob jobs, some of which haven’t gone quite to plan, but I love my body and I was having so much fun while earning great money.’ 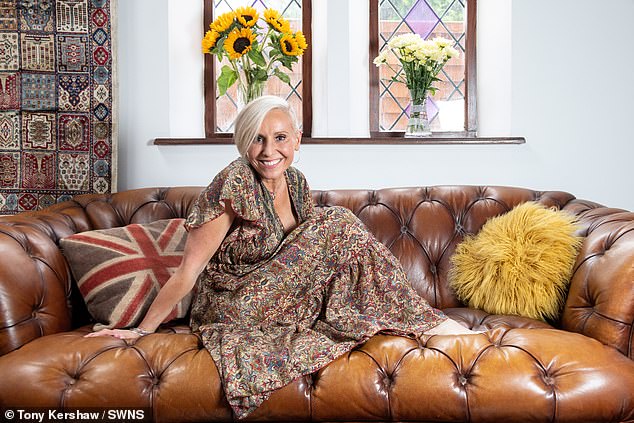 So far this year Michelle has done five charity shows with her group, earning hundreds of pounds for a variety of different causes stripping across the Isle of Wight 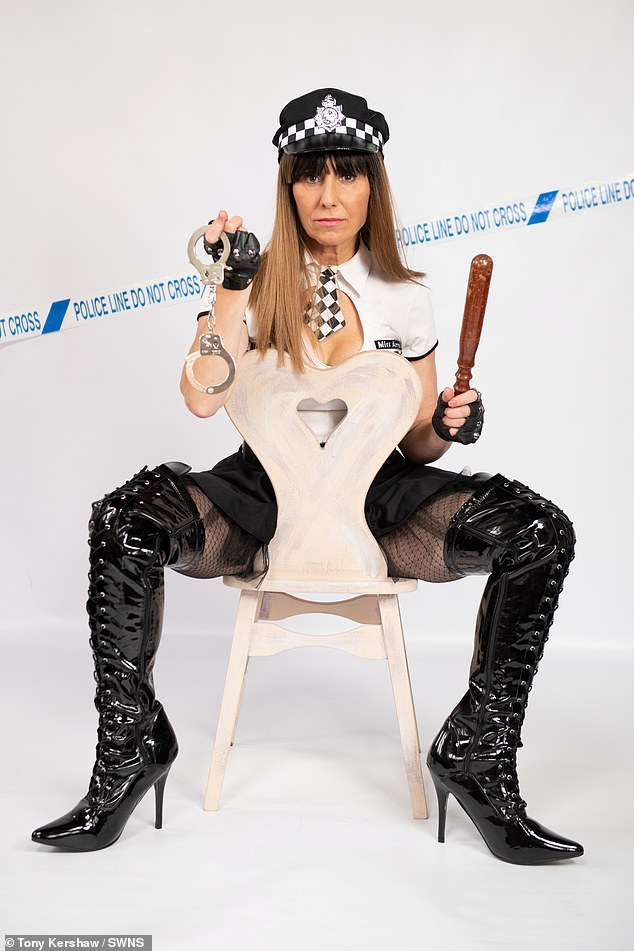 Michelle loved the freedom of getting her kit off, but was under no illusion that when she returned to policing, she had to be mindful of who she told about her experience.

She then spent the remainder of her career in Hampshire, before retiring in 2020.

‘Coming back to the UK it felt like a bit of a reality check, but I liked my job as a police officer so it wasn’t the end of the world,’ she continued.

‘I returned to work, where I did twenty more years of service, specialising in the fields of domestic abuse and vulnerable adults.

‘And I finished my career in public protection, managing registered sex offenders.

‘After thirty years of restrictions, it felt surreal being able to act without fear of it impacting my career.

‘I wasn’t sure what I wanted to do, but I remembered the fun I had in Australia and was keen to find something similar here in the UK.’ 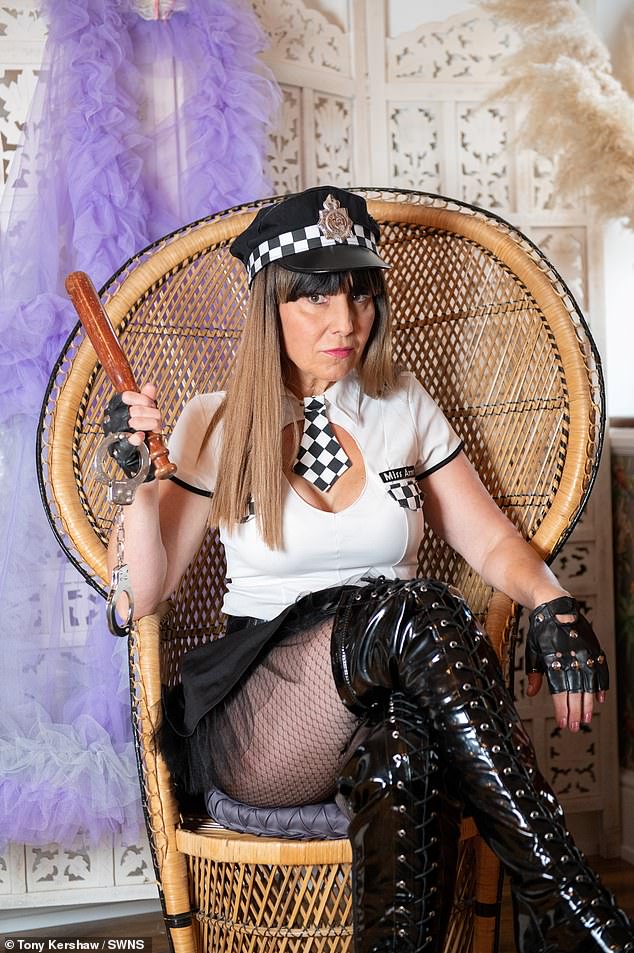 After thirty years of restrictions, Michelle said it ‘felt surreal’ being able to act without fear of it impacting her career

Michelle settled down with husband John Walton, 56 – who is also a former policeman – after calling time on her career.

In a previous marriage, she’d attempted three rounds of IVF after she couldn’t conceive – but sadly was unsuccessful in her attempt to start a family.

So, with buckets of free time and a healthy police pension, Michelle explored different ways of spending her retirement.

She began taking sexy snaps of other women to help them feel body confident and started her own lingerie photography business.

To help her with her new work, she felt it would be useful to learn some seductive moves and poses, so she could guide her clients during their photo shoots.

So she joined a small burlesque dance class, where she learnt group dances, and was encouraged to create her own solo act. 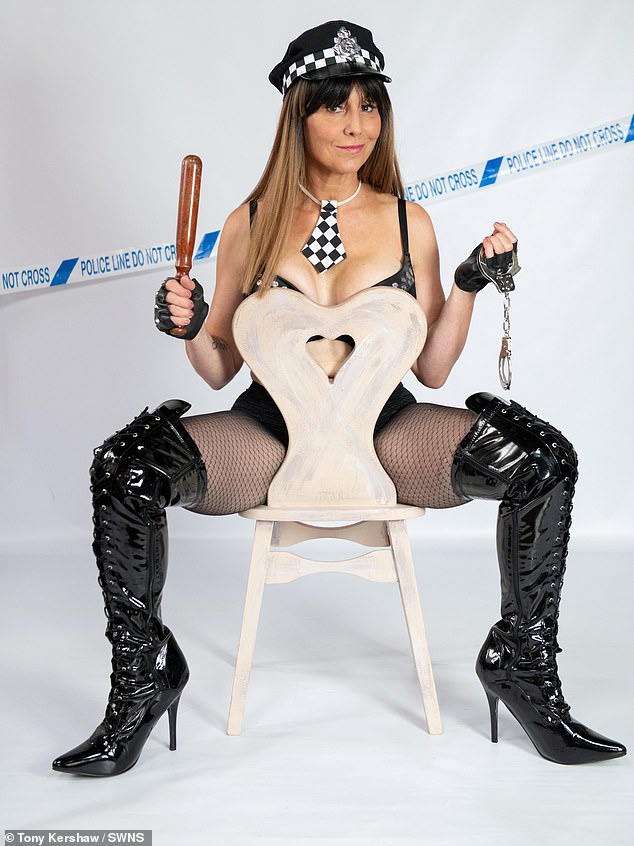 That’s where Michelle came up with the idea of becoming a police stripper, and later joined the Charity Cabaret Club on the Isle of Wight.

The club consists of a group of cabaret performers who perform at charity events throughout the year – and Michelle was invited to strip as part of the show.

She said: ‘I created a stripping copper routine, as I already have the truncheon and handcuffs!

‘My routine involves walking up to the stage waving two blue lights around, then stepping up on a chair pretending to direct traffic, then taking my first layer of clothing off.

‘I then step in to the audience and dish out fixed penalty tickets, with the offence of ‘being too sexy’.

‘I then handcuff someone in the audience, drag them on stage, pretend to search them, wrap police tape around them, then do what looks like a lap dance around them.

‘The music changes and I get my truncheon out, wave it around, slap it on my bum, then start removing my belt, dress, then finally remove my bra, wave it around, then walk off stage with the two blue lights on my boobs.

‘I mainly do these shows for charity events rather than for payment so it’s all for a good cause!

‘My boudoir photography business promotes body confidence and to love yourself just as you are.

‘We are all different shapes and sizes and we should feel proud of our lumps, bumps, scars and cellulite.

‘I’m more than happy flashing my boobs off because I’ve spent loads of money on them over the years – about £20,000.’

So far this year Michelle has done five charity shows with her group, earning hundreds of pounds for a variety of different causes.

She says she is loving her new police stripper act, and has no plan of hanging up her handcuffs anytime soon.

‘I’m telling my story because I’m proud of my achievements and what I’ve done,’ Michelle said.

‘I hope it inspires other women to love their own bodies, regardless of their shape or size.

‘I’m sure there will be people that will judge me and think I’ve done wrong – but I don’t care.

‘I will simply do what makes me happy for as long as I live, and I’d encourage anyone else to do the same!’

Michelle is also a self-published author, and wrote a book to get her head around the fact she couldn’t have children – titled All Because the Lady Loves Wedding Cake.