A neighbor who sent a letter asking a mother to stop her children from ‘whooping and shouting’ in their backyard is a freelance editor who has worked for several big-name publishing houses, DailyMail.com can exclusively reveal.

Vincent Cusenza, 65, hand-posted the anonymous note to a neighbor in affluent Park Slope, Brooklyn – consistently voted as one of the best in New York City to raise children.

He demanded that Christina Frankel, 36, and her husband Jay, 37, quieten their toddlers down, adding that they encourage them ‘too loudly’.

Frankel, who has a three-year-old son and one-year-old daughter, posted the letter on the Park Slope Moms’ Facebook page, earlier this month.

She was shocked when they received the anonymous ‘judgmental’ letter, and was inundated with supportive comments from other parents online.

Freelance editor Cusenza, whose clients include Harper Collins and Kensington and Scholastic, explained that he had lived in the area, which has an average house price of $1.2million, for 30 years.

The letter began: ‘Dear neighbors, I am an editor and writer who lives across the backyard fences from you.

‘I do most of my work in my garden. In good weather, I am out here most days for many hours. On these brownstone blocks, each of us lives within 50 feet of a dozen neighbors.

‘Keeping intrusive sources of noise to a minimum is one way we show one another mutual respect.’

When approached for a comment by DailyMail.com he declined to comment on the situation, with a man who lives with him adding ‘the letter speaks for itself’. 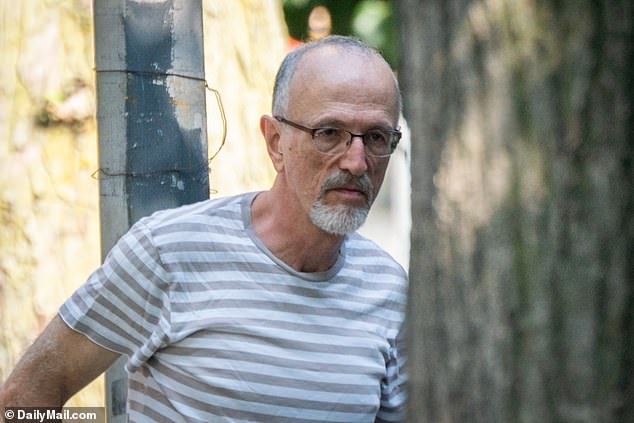 Vincent Cusenza, 65, who lives in Park Slope, Brooklyn, is accused of delivering the anonymous note to the home of Christina Frankel, 36, and her husband Jay, 37, demanding that they quieten their toddlers – and berating them for encouraging them ‘too loudly’. He would not comment when approached by DailyMail.com and said ‘the letter speaks for itself’ 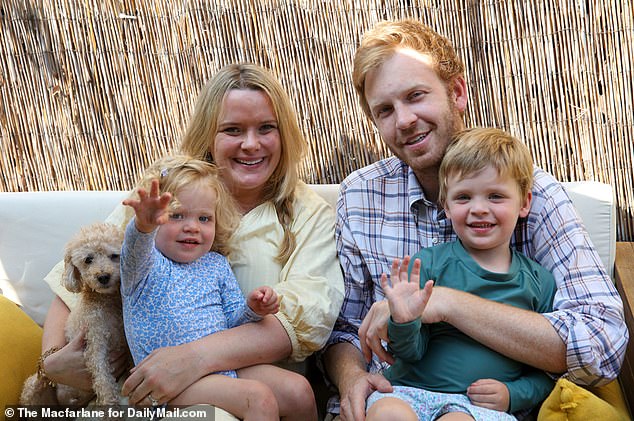 Christina and her husband Jay, a teacher, say that they don’t make excessive noise and their children should be allowed to play in their garden 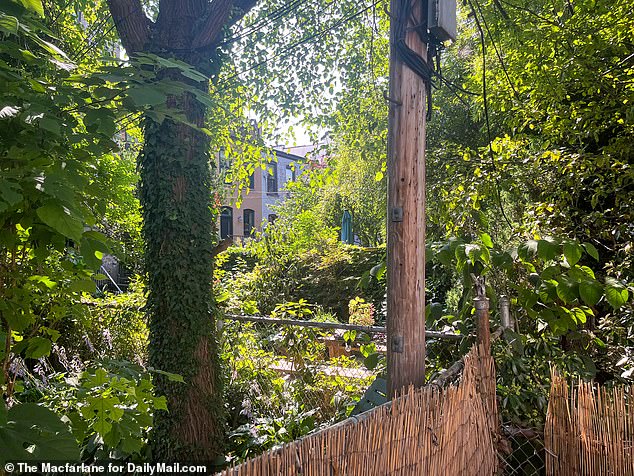 His garden is not directly connected to the family’s luxury Park Slope property, and the residents have put up a high privacy fence 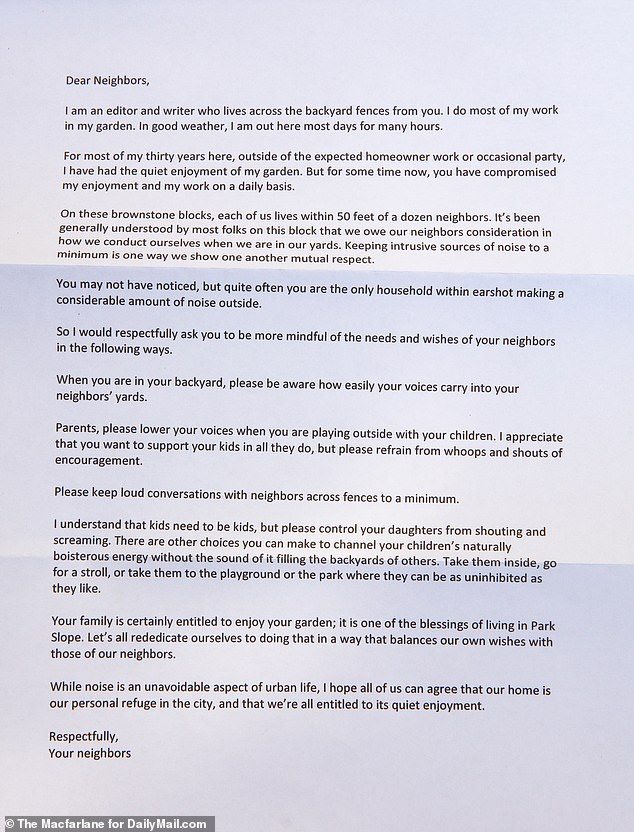 A source confirmed to DailyMail.com that neighbor Vincent Cusenza  penned the letter and dropped it off to the family last week, telling them that they should ‘control’ their children from shouting

Park Slope is one of the most exclusive neighborhoods in New York, with the average household income for renters being $129,570 and for homeowners its a whopping $236,720.

Christina, who works as a PA at a private household, said her other neighbors think the letter is ‘completely nuts’ and she refuses to tell her children to keep quiet.

Speaking to DailyMail.com the mother-of-two said: ‘We have been whooping for years now. I checked with all of my neighbors who said that they didn’t get a letter. It was just us.

‘When I came home that night and told my husband who I thought it was, he remembered that they yelled at us to shut up a couple of years ago.

‘Raising two rambunctious toddlers is the most challenging thing I’ve ever done. As for the whoops of encouragement, perhaps it was us cheering when our neighbors daughter took her first steps the other day.

‘Or it could have been my reaction to my daughter using the potty for the first time.

‘Being a parent gets noisy – literally and figuratively. I would bet money that this person doesn’t have kids because of the way they spoke to me.

‘People like this they make these things snowball in their heads and everybody knows these people in New York.’

After receiving the letter, the couple tracked down Cusenza and dropped off a copy of the DailyMail.com article which reported on the petty letter.

Accompanying it was a card, which read: ‘Dear neighbor, one copy for you and one copy for each of my children memory boxes to remind them of their unlimited youth.’ 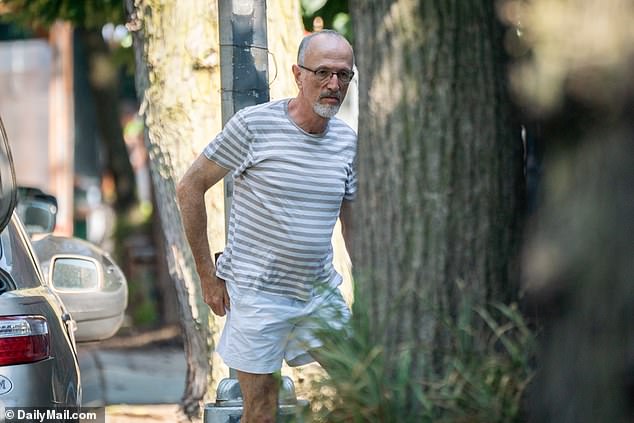 The letter made several suggestions for the family to keep the noise level down, including going ‘for a stroll or take them to the playground or the park where they can be as uninhibited as they like’ 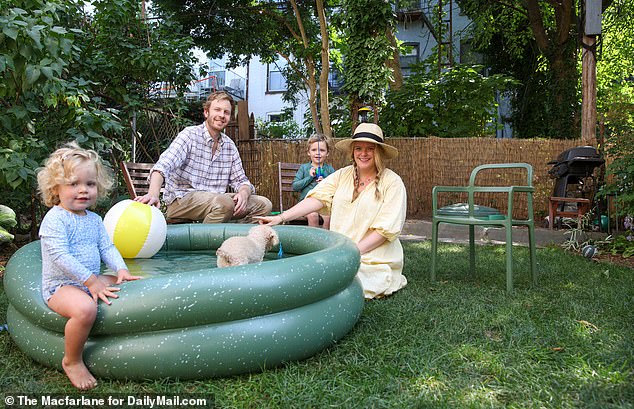 Christina told DailyMail.com that the majority of New Yorkers ‘don’t have children and are clinging to their idealized ways.’ Speaking about her neighbor, she said: ‘I didn’t think that being a parent would be easy but this is ridiculous, they are selfishly putting their own interests first’ 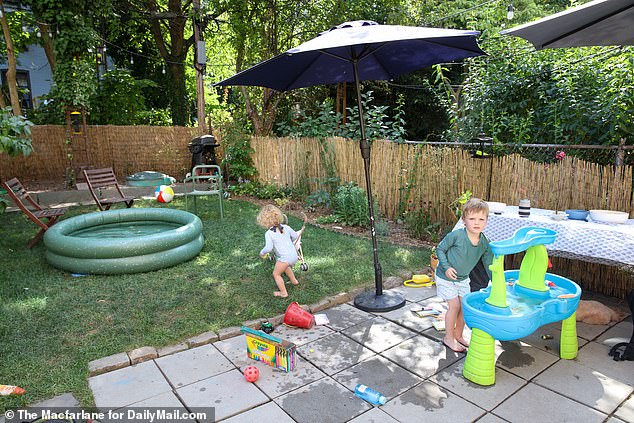 Teacher Jay believes that their grumpy neighbor sent the letter because he has been off work for the summer holidays, and has been spending more time in the garden with his two children

Christina said that her neighbor clearly ‘doesn’t have children and is clinging to their idealized ways’.

She added: ‘I didn’t think that being a parent would be easy but this is ridiculous, they are selfishly putting their own interests first.

‘I am an incredibly respectful person, my direct neighbors say that they don’t hear us, they keep their doors open – they’re so close and they’re not bothered by it.

‘It’s the childless population that will literally find anything wrong. They should consider themselves lucky that it isn’t a barking dog, or anything worse.

‘They are complaining about kids having fun, they are buzzkills, killjoys. No one in that position can be telling me what to do.’

She said that if her neighbors reaction to children ‘squealing with joy is anger or annoyance’ then perhaps they should not live in an area so densely populated with children.

Her husband Jay, a teacher, said: ‘The letter itself was so aggressive, we were surprised when we got it because we were worried that we had disturbed these people.

‘But honestly we aren’t that loud, the kids do enjoy the garden, and I think maybe its the summer holidays that has triggered this.

‘I was off with the kids last week, and I spent a lot of time in the garden with them so I think that might have been what pushed them over the edge.

‘But they are just kids being kids, the occasional behavior correction but it’s not yelling at all hours.

‘Even if they had approached us about it in a different way we would have had a different response.’

The letter made several suggestions for the family to keep the noise level down, including going ‘for a stroll or take them to the playground or the park where they can be as uninhibited as they like.’

Christina suggested that her neighbor ‘invest in proper headphones’ or ‘find a place that is a designated quiet area, like a library.’ 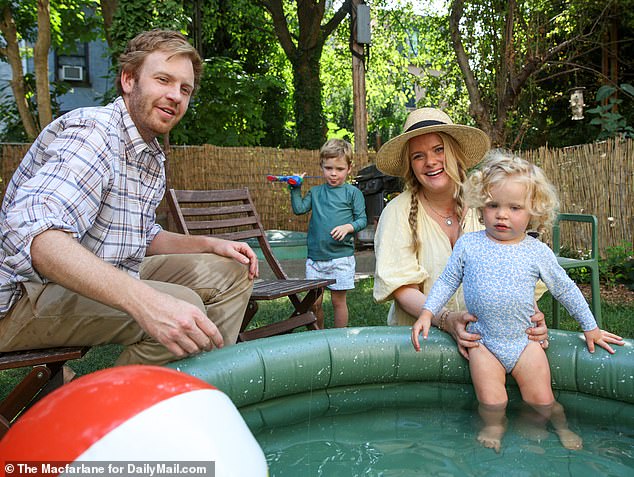 Christina and Jay live in Park Slope  – one of the most exclusive neighborhoods in New York with the average household income for renters being $129,570 and for homeowners its a whopping $236,720 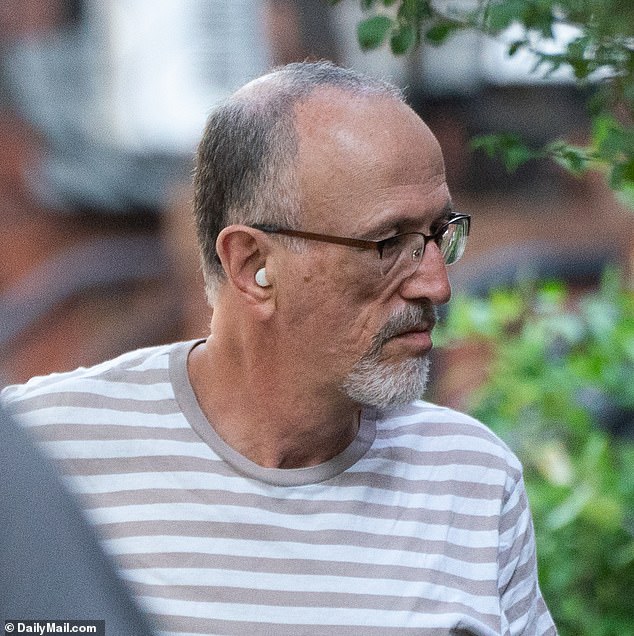 The freelance editor declined to comment when approached by DailyMail.com, with a fellow resident adding that the ‘letter speaks for itself’ 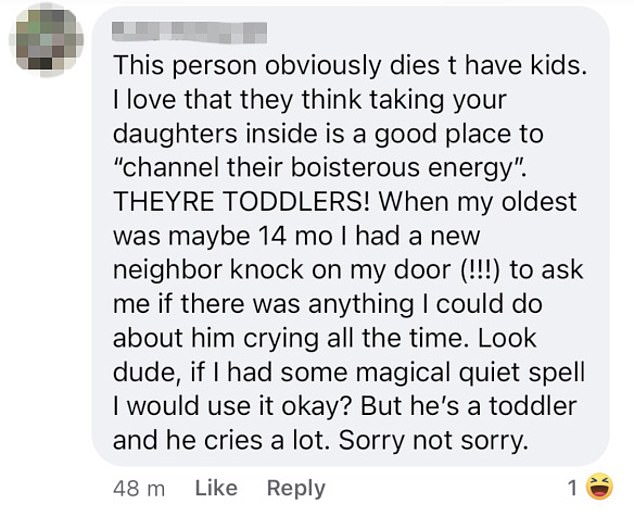 She added: ‘They probably are just assuming that its just us. Just because they had 30 years of peace not entitled to it, go to a library why shouldn’t you, the adult, go inside.

‘I’m not playing loud music, we aren’t outside at inappropriate times ad the kids aren’t screaming at the top of their lungs.

‘It was so ridiculous, my son is squeals when he shoots his car off a ramp and he liked what it did. To put that in writing is so stupid, they shouldn’t live in Park Slope.

‘If you want to be a kind respectful neighbor you need to open a line of communication.

‘If they want to keep the fence up and drop off an anonymous letter I’m not just going to roll over, you old grumpy f***.

‘They are holding on to the past that doesn’t exist anymore, were paying a very big premium to live in this area.