The juror who almost triggered a mistrial for Ghislaine Maxwell will appear on a new documentary bragging about how he helped convict her.

Scotty David – known as juror 50 during the case – will appear on Paramount+’s new docuseries Ghislaine – Partner in Crime, which begins streaming April 7.

David didn’t declare he’d been a victim of childhood sexual abuse in a jury questionnaire.

But he revealed the information during jury discussions, and boasts in a trailer for the upcoming show about how his revelation helped sway jurors to convict Maxwell, 60, of child sex trafficking.

‘Some jurors did have serious credibility issues with some of these victims,’ David says in the trailer. ‘I felt that it was very important that I shared my sexual abuse story. I felt that helped other people come to the conclusion that just because some memories are fuzzy, doesn’t mean they’re not telling the truth.’

‘After I spoke my story, the room was dead silent,’ he says in the trailer. 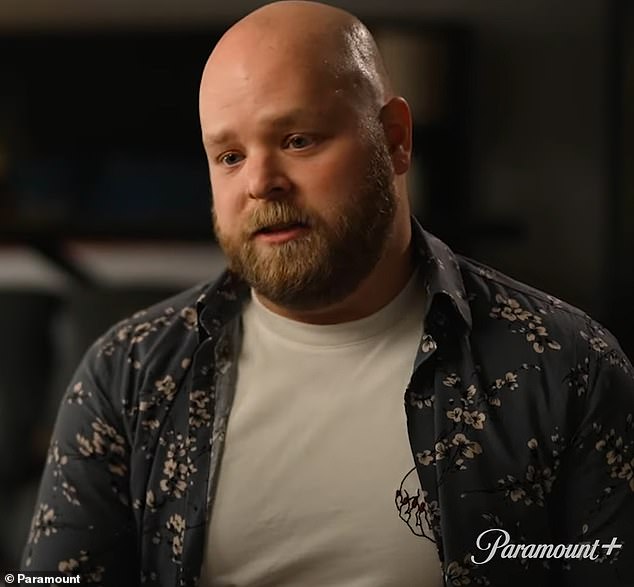 Scotty David, also known as ‘Juror 50’, (pictured) says in the trailer he helped sway jury members who doubted victims by telling them of his own past sexual abuse

The documentary also hears from Ghislaine’s brother Ian Maxwell, who continues to believe in his sister’s innocence, and said: ‘I just don’t believe that my sister would have crossed those paths.’

And Virginia Roberts Giuffre is also interviewed. She famously accused Maxwell and Epstein of sex trafficking her to Prince Andrew when she was 17. Andrew denied impropriety, but settled a civil suit with Giuffre for an estimated $12m last month.

Earlier this month, a judge ruled that Maxwell could not be retried over the jury questionnaire fiasco, with the sex trafficker now facing up to 65 years behind bars when she’s sentenced in June. Maxwell, who was born to British newspaper baron Robert Maxwell and enjoyed a life of fabulous wealth and privilege up until her 2020 arrest, now faces dying behind bars.

Judge Alison Nathan said that she opted not to retry Maxwell after hearing from David, and deciding that he had still tried Jeffrey Epstein’s former madam impartially.

David’s lies were busted after he gave an interview to DailyMail.com shortly after the trial concluded with Maxwell’s conviction in November.

In interviews immediately after the trial, including with DailyMail.com, the 35-year-old executive assistant explained to that in his own case of sexual abuse he could remember some details but not everything – a key point of contention in the case.

David said: ‘I know what happened when I was sexually abused. I remember the (color) of the carpet, the walls. Some of it can be replayed like a video.’

In his interviews, David also described how in vivid detail serving on the jury of six men and six women which took 40 hours to convict Maxwell.

The four hour docuseries in which he features is set to explore the British heiress’ fall from grace after she was convicted in December of grooming and trafficking underage girls for her pedophile financier ex-boyfriend, Jeffrey Epstein.

Epstein died in jail in Manhattan in August 2019, while awaiting trial and Maxwell’s lawyers argued that she was being tried for his crimes, and insisted she had no idea of his depravity. 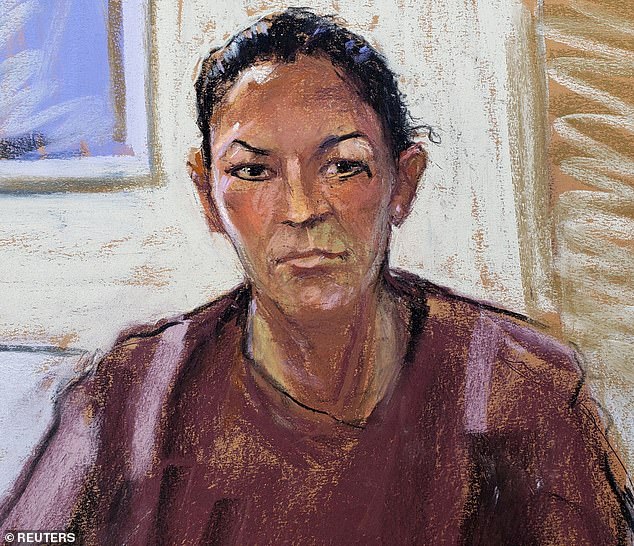 The jury disagreed, however, and Maxwell, 60, was convicted on five of six counts after a month-long trial where four of her accusers testified.

David previously said that at one point he ‘locked eyes’ with Maxwell from his third row seat in the jury box.

He said: ‘There were times when it felt like she was staring right at me and we would lock eyes…it didn’t feel real’.

David said that after hearing all the evidence he was convinced of Maxwell’s guilt.

He said: ‘After all I’ve learned, she’s just as guilty as Epstein. I don’t want to call her a monster, but a predator is the right word.

‘She knew what was happening. She knew what Epstein was doing and she allowed it to happen. She participated in getting these girls comfortable so that he could have his way with them’.

David said he went into the trial firmly believing that Maxwell was ‘innocent until proven guilty’ and viewing the victims with a skeptical eye.

But, he said, ‘After all I’ve learned, she’s just as guilty as Epstein. I don’t want to call her a monster, but a predator is the right word. 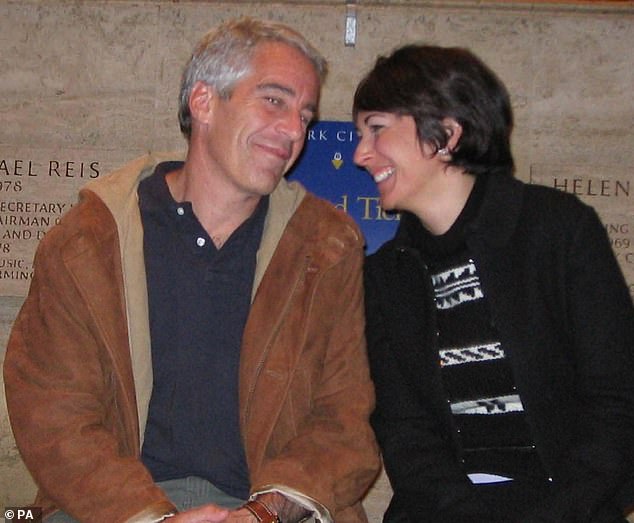 The docuseries is set to explore the British heiress’ fall from grace after she was convicted in December of grooming and trafficking underage girls for her ex-boyfriend, Jeffrey Epstein 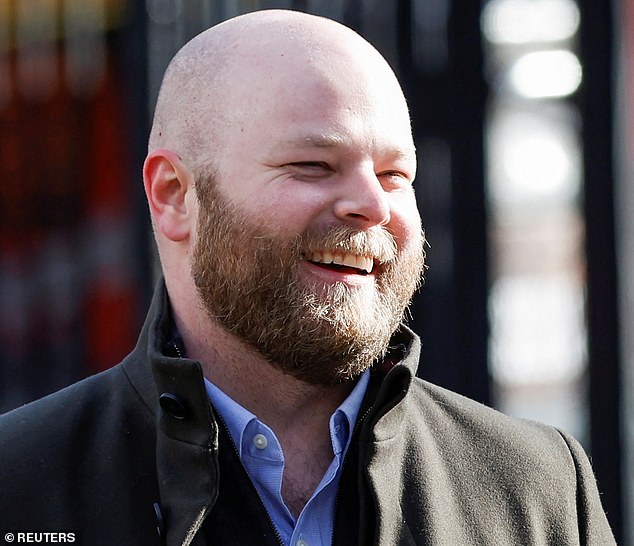 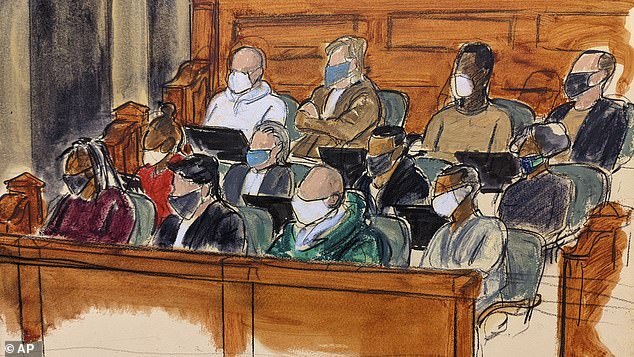 ‘Some jurors did have serious credibility issues with some of these victims,’ Juror 50 says. ‘I felt that it was very important that I shared my sexual abuse story’ (court sketch of jurors)

‘She knew what was happening. She knew what Epstein was doing and she allowed it to happen. She participated in getting these girls comfortable so that he could have his way with them.

‘And, to me, them returning repeatedly for the money has nothing to do with anything because these girls were minors, and it doesn’t matter what incentivized them. It matters what happened to them.’

As a result of David publicly coming forward with his past sexual abuse Maxwell’s attorneys requested a new trial on the basis that David had not disclosed the information during jury selection, as required. 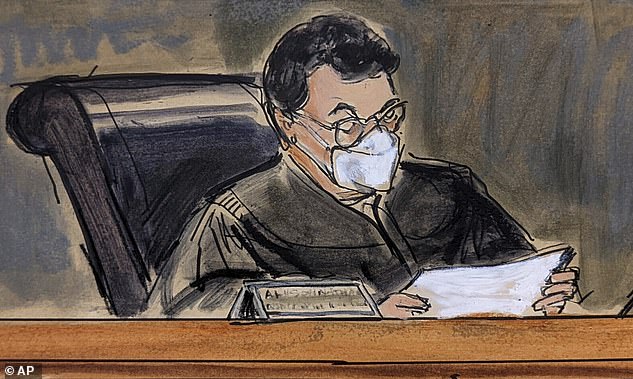 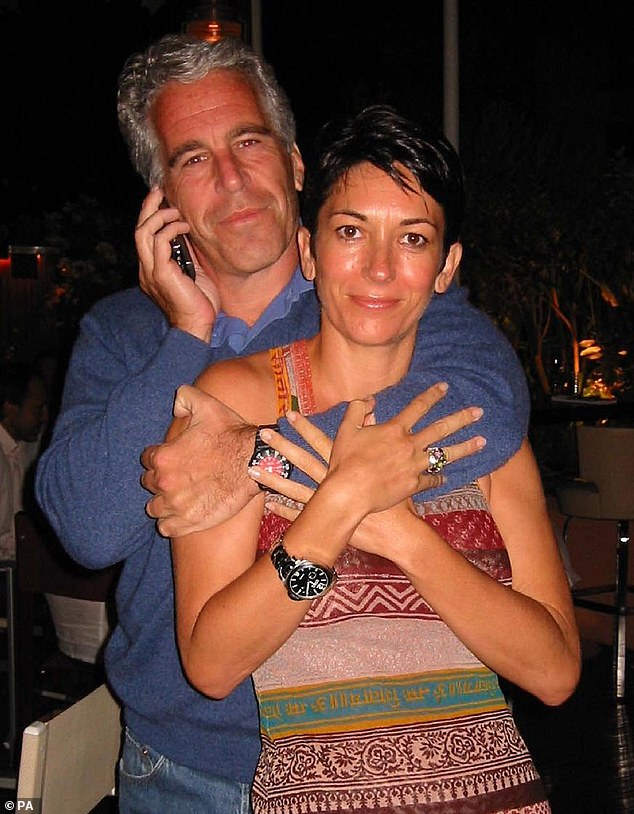 Ghislaine Maxwell is pictured with her ex-boyfriend, Jeffrey Epstein. Earlier this month Maxwell, 60, was denied a retrial after her December conviction on sex trafficking charges

But earlier this week Judge Alison Nathan refused to delay her decision and denied a retrial – setting a date for Maxwell’s sentencing for June 28.

Nathan said the Juror 50’s failure to disclose his prior sexual abuse during the jury selection process was highly unfortunate, but not deliberate.

Nathan, explaining why she denied the retrial, wrote that the juror’s claims that he remained impartial toward Maxwell rang true.

When questioned about it, he answered ‘frankly and honestly, even when the answers he gave were the cause of personal embarrassment and regret,’ she said, in her 40-page decision.

Nathan wrote that David was not inherently biased because of his background.

‘That is not the law, nor should it be.

‘In sum, the court concludes that the evidence in the record does not support the finding that Juror 50 was biased. Juror 50’s sworn testimony did not reveal actual partiality. And Juror 50 was not impliedly or inferably biased,’ Nathan said in her ruling.