A group of Good Samaritans came to a Florida Highway Patrol trooper’s aid after he was attacked on an interstate in Tampa.

The shocking moment was caught on the officer’s dashcam video, showing the trooper as he makes contact with 24-year-old Alexander Hernandez Delgado, who was illegally walking along the interstate Friday, Fox News reported.

Delgado reportedly told the trooper that he was walking along the highway because his mother had kicked him out of the house, according to the unidentified trooper’s arrest report.

‘I then searched the subject and attempted to place him in the back of my patrol car. The subject became argumentative and stated that I am bothering him and that he would like to be left alone,’ the trooper wrote in the report. 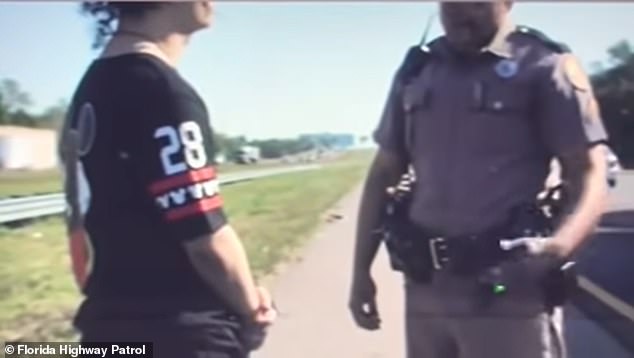 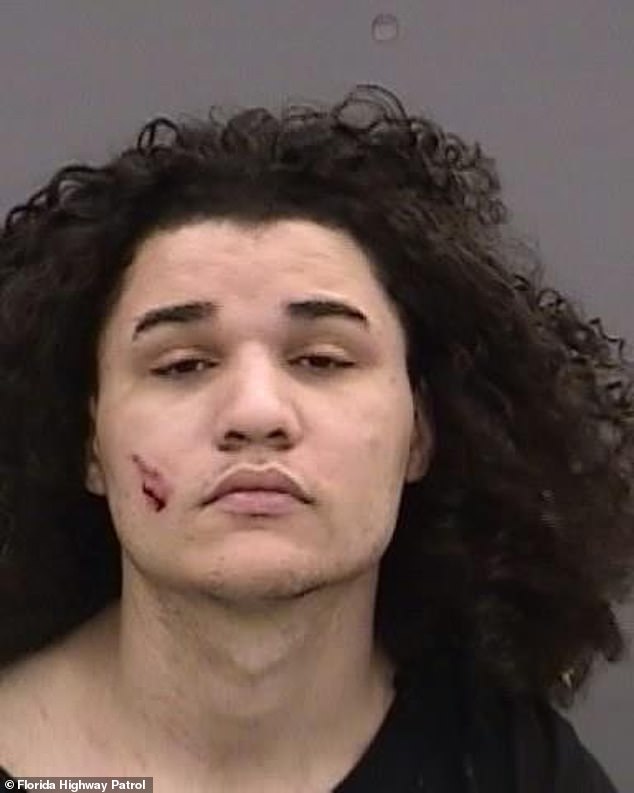 Alexander Hernandez Delgado, 24, was arrested and charged with battery on a law enforcement officer and resisting an officer with violence 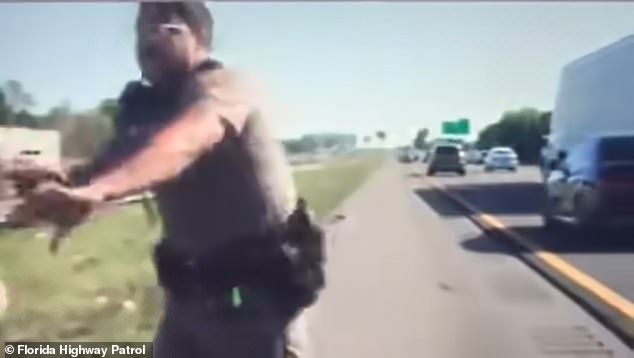 Video of the encounter then shows Delgado pull away from the officer, with that moment captured above 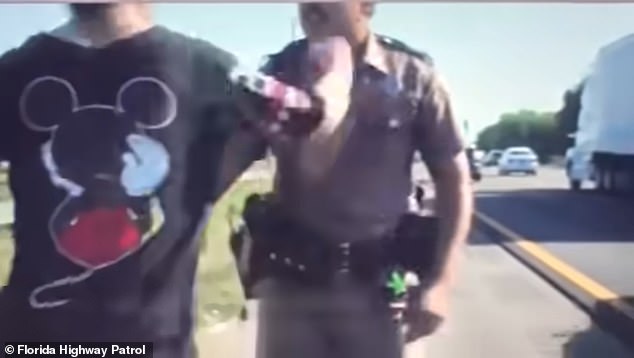 Delgado then punches the unidentified officer in the face, the trooper’s arrest said

Video of the encounter then shows Delgado pull away from the officer before  apparently punching the trooper in the face.

The scuffle continues as Delgado repeatedly hits the trooper in the face as the two go off-camera towards the median, where the trooper reported Delgado hit him several more times.

As the trooper eventually manages to tackle Delgado, an 18-wheeler and another car can be seen pulling over before several bystanders rush to help the officer subdue Delgado.

‘The FHP thanks all the Good Samaritans that stopped on I-4, in both directions, on Friday morning, March 18th in Tampa to help our Trooper,’ a spokesman for the FHP said in a statement.

The trooper sustained only minor injuries, receiving a bloody nose as a result of the attack, officials said. 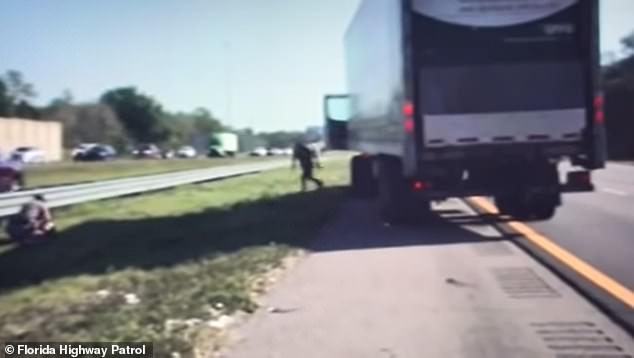 As the trooper eventually manages to tackle Delgado, an 18-wheeler and another car can be seen pulling over before several bystanders rush over to help the officer subdue Delgado 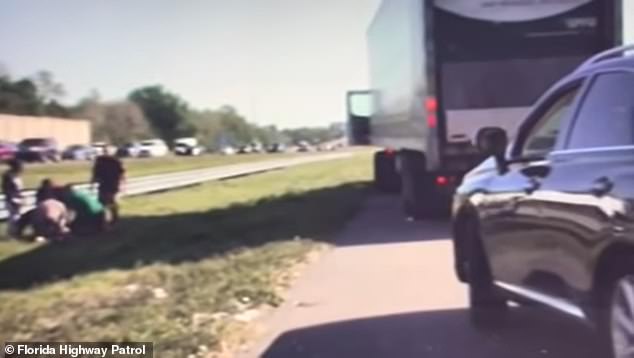 Delgado was taken to the Hillsborough County Jail and charged with battery on a law enforcement officer and resisting an officer with violence.

The incident comes two months after police bodycam footage captured the moment nine officers unleashed a hail of gunfire and killed a man who was also walking along a Tennessee interstate – while armed with a box cutter – after a tense 30-minute standoff.

Landon Eastep, 37, was agitated and carrying a box cutter in his hand along I-65 in Nashville on January 27 when police shut traffic on the busy highway and pleaded with him to turn himself in. 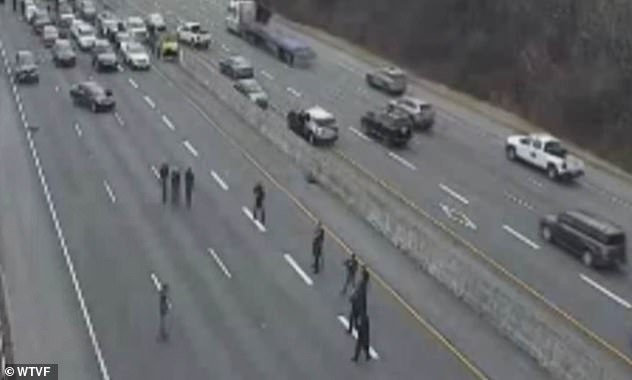 Eastep was carrying a boxcutter in his left hand when he quickly pulled his right hand out of his pocket holding an unknown ‘silver, shiny cylindrical object’ 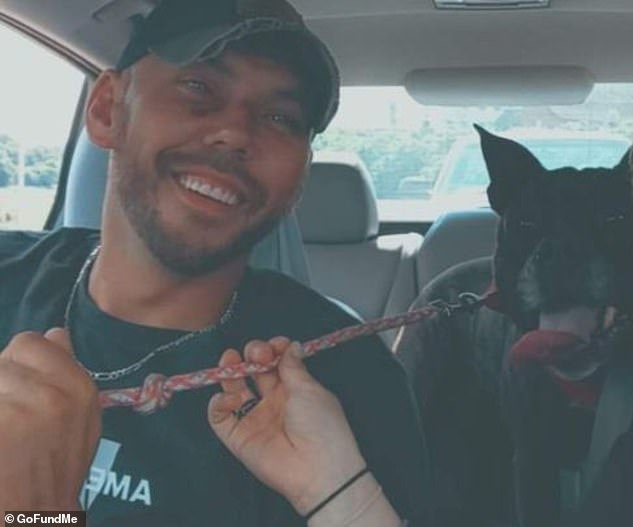 The cops formed a semi-circle around the man, who friends said has battled mental health issues, and continued to beg him to take his hand holding the weapon out of his jacket pocket.

‘I don’t want you dead on the side of the interstate. Nobody wants that,’ said Kidd, who was from a nearby jurisdiction and off-duty at the time, in the eight-minute video released by the Metro Nashville Police Department.

‘These folks right here they’ve got kids. Look, I’ve got kids in the car, kids standing by. Don’t give them that show, brother.’

He was shot multiple times and pronounced dead at a local hospital, Aaron said.

No officers were injured in that incident.