Representative Dan Crenshaw, who lost an eye while deployed as a Navy SEAL in Afghanistan, was heckled by far right protesters at a GOP event, with one screeching the nickname ‘Eyepatch McCain’ at the Congressman.

Crenshaw, 38, has been hit with the slur – a reference to the late moderate Republican Senator John McCain – ever since Tucker Carlson first brought the moniker up in mid-May.

The Congressman was being accosted by a group of hecklers including Alex Stein, a self-described ‘comedian and social activist’ and others whom witnesses told Mediaite were Proud Boys at  the Republican Party of Texas convention Saturday.

The video, which Stein tweeted out himself, shows Stein and others approaching Crenshaw at the event.

One of Crenshaw’s staffers was allegedly shoved during the protest, although the protesters did not make physical contact with the congressman. 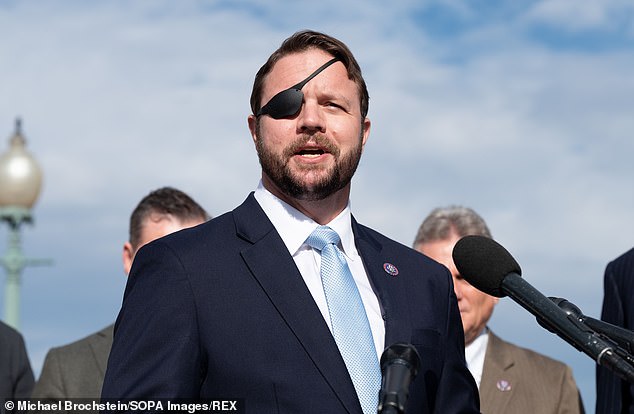 Representative Dan Crenshaw, who lost an eye while deployed in Afghanistan, was heckled by far right and Proud Boys-adjacent protesters at a GOP event, with one bringing up the recurring nickname of ‘Eyepatch McCain’ at the Congressman 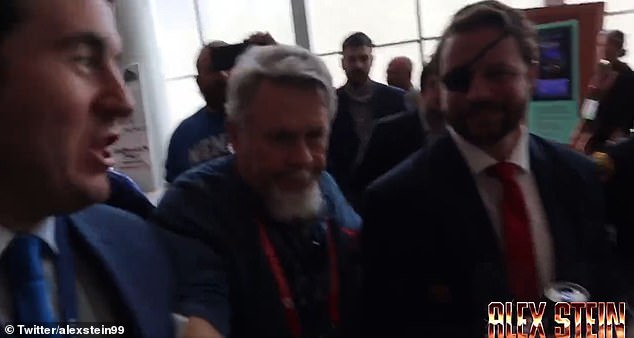 The Congressman was being accosted by a group of hecklers including Alex Stein, a self-described ‘comedian and social activist’ and others whom witnesses told Mediaite were Proud Boys at the Republican Party of Texas convention Saturday 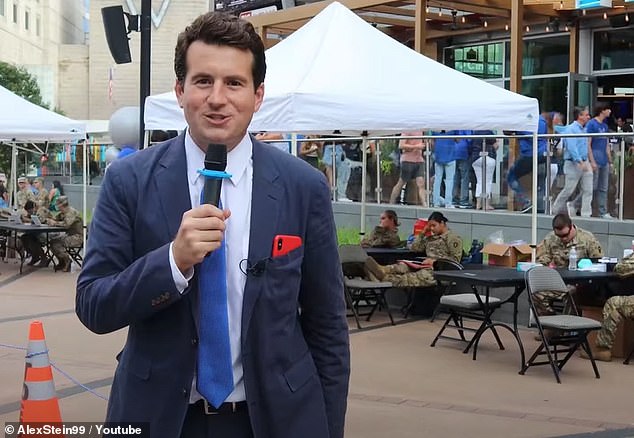 Carlson first used the name – a reference to both the past military service and occasional breaking from the far right line of Senator McCain – on May 16 after Crenshaw was critical of those who didn’t support military aid for Ukraine, according to The Daily Beast.

‘You know the more I think about it, it takes a lot of gall for eyepatch McCain to attack moms who are worried about baby formula as pro-Russia,’ Carlson said on his Fox News show.

This is just trash,” McCain tweeted. “That being said I’m sure @DanCrenshawTX doesn’t mind the comparison.”

In response to this latest dust-up, McCain has retweeted both Crenshaw’s response and a tweet by CNN host Jake Tapper calling it ‘[a]bsolutely disgusting that the far-right has turned a Navy SEAL’s war wound into some lame attempt at derision.’

Another Twitter user later accosted Crenshaw for being a ‘World Economic Forum sellout.’ 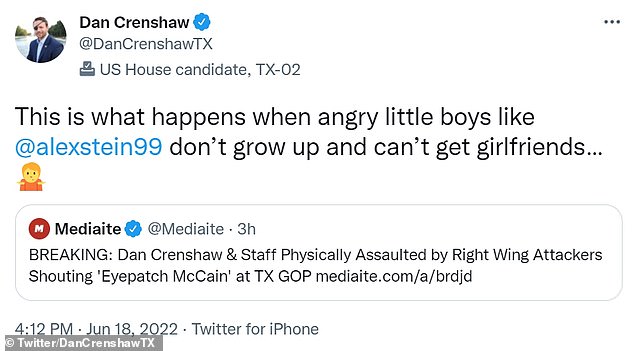 Crenshaw, previously a favorite target of liberals to the point that then-SNL cast member Pete Davidson publicly apologized to him for mocking his eyepatch after conservatives including Carlson ripped the comedian, has since come under fire from the far right.

Congresswoman Marjorie Taylor Greene had gone after Crenwhaw when he appeared on Fox News and called for federal interventions to deal with the rapid spread of the omicron virus variant.

‘So what the federal government should be doing, again, is using their FEMA resources to bolster a lot of these testing sites, open up new testing sites,’ Crenshaw said.

Greene, who got suspended from Twitter on Jan. 2, slammed his remarks on Instagram. She said the feds shouldn’t be setting up testing for ‘sneezes, coughs, and runny noses’ – describing the most mild form of a virus that can also land people int he hospital with severe breathing problems or result in death.

Crenshaw wrote in response: ‘Hey, Marjorie, if suggesting we should follow Trump policy instead of Biden mandates makes you mad, then you might be a Democrat — or just an idiot.’ 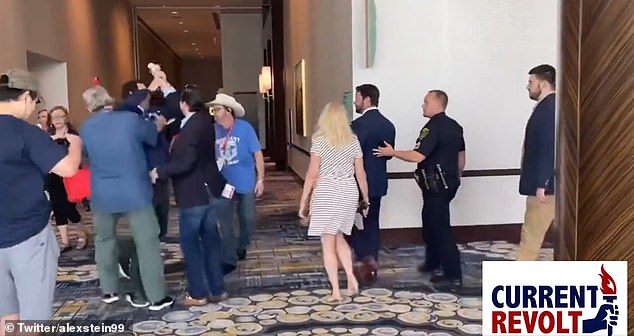 He kept after her in his ‘victim’ attack – and accused her of playing up such incidents to boost her own fundraising and notoriety. The voted to strip her of committee assignments for some of her prior statements.

Wrote Crenshaw: ‘That Marjorie scoffed at the notion of supporting anti-censorship legislation is indicative of her true intent: to remain a victim. She doesn’t want solutions and she doesnt [sic] care if you get censored. She just wants to be a victim so she can keep asking you for campaign donations. It’s a scam.’

Greene hit back on conservative media platform Gettr: ‘Dan Crenshaw, who spends more time attacking America First Republicans because he (not so secretly) hates Trump, is talking about a bill to ‘hold Big Tech accountable!; but is the same type of toothless bill the Paul Ryan types try to sell to make it look like they’re doing something,’ she wrote.